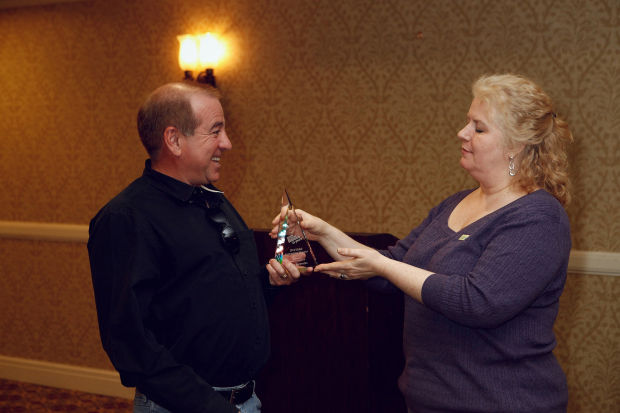 Hanford resident Steve Banevedes (left) was one of 21 educators who received a Enterprising Educators of the Year award by the Network for Teaching Entrepreneurship (NFTE) organization in New York City last month. He received the award from Suzanne Taylor, NFTE director of events and alumni services. (Contriubted) 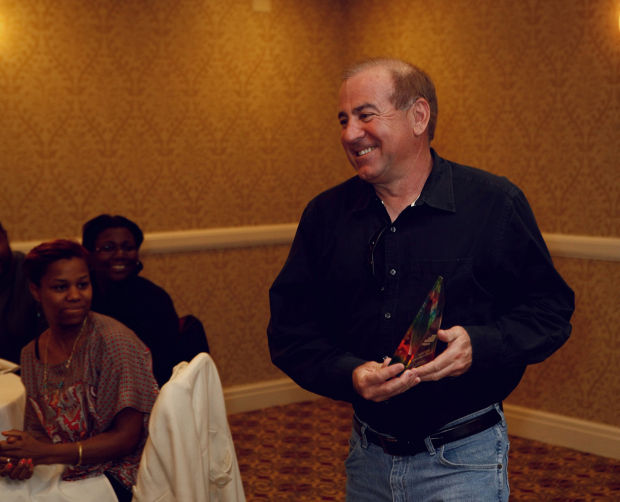 Steve Banevedes was one of 21 educators who received a Enterprising Educators of the Year award by the Network for Teaching Entrepreneurship (NFTE) organization in New York City last month. (Contributed)

FRESNO — A Fresno teacher was awarded for his work teaching at-risk students about business during a special gala in New York City last month.

Hanford resident Steve Banevedes was one of 21 educators who received an Enterprising Educators of the Year award from the Network for Teaching Entrepreneurship (NFTE). The worldwide organization, whose Fresno chapter is operated by the Lyles Center for Innovation and Entrepreneurship at California State University, Fresno, provides entrepreneurship programs for at-risk and low-income students.

“I never knew I was nominated, let alone given an award,” Banevedes said. “I feel very honored to be selected.”

Banevedes was chosen for the award by the Central California NFTE office, located in the Lyles Center. In order to get it, a teacher must have been teaching the curriculum for at least two years and have shown they interact well with students.

“Steve is really the epitome of that,” said Casey Lamonski, project coordinator for educational outreach. “He’s an amazing teacher. The students know they can go to him if they need help. He’s really been able to take our curriculum and bring it to life for students.”

Banevedes works for Agape, Inc., a group that owns three charter schools in Fresno aimed at serving at-risk students. Banevedes serves as the assistant director of information technology for the schools and also teaches an entrepreneurship class for the NFTE at Carter Woodson School, which he got the award for.

“It’s great to be able to turn these kids around and motivate them,” he said. “It’s a really rewarding experience. That’s the true award.”

Banevedes has been teaching at the school for the past six years. In the past, he taught math and computers at St. Rose-McCarthy School in Hanford. Although he discovered he liked working with kids and enjoyed working at the school, he thought the pay was too low and found the position with Agape, Inc. He originally started out just teaching technology classes and eventually picked up the administrative duties.

“They got rid of me running the technology classes so I could do IT,” he said. “However, after they added the entrepreneurship class to my schedule, they decided to let me continue teaching, it even though I would be running IT.”

In the class, Banevedes said he teaches students all aspects of running a business. Students are also required to come up with their own business idea and create a plan. At the end of the course, a competition is held in which the plans developed by the students are judged.

“I’m trying to talk with them about running a business,” he said. “I try to show them that they don’t have to just work in menial jobs for the rest of their lives and that they should strive for something better.”

However, Banevedes said it’s a major challenge getting his message across to the students. He said most of the students are struggling to learn, are in gangs and have bad home lives.

“It’s serious enough where all bags are checked and students have to go through metal detectors every morning,” he said. “That’s the kind of schools they are. However, I like working with these kids and trying to help them improve their lives.”

Banevedes said some students are too far-gone to help, but said he has to just move past it to aid those students that are willing to learn.

“It’s an unbelievable challenge because you can’t help them all,” he said. “You really get to understand all the hardships these kids are facing. All you can do is do your best and try to save a few.”

The reporter can be reached at 583-2429 or by email at jluiz@hanfordsentinel.com.

Hanford resident Steve Banevedes (left) was one of 21 educators who received a Enterprising Educators of the Year award by the Network for Teaching Entrepreneurship (NFTE) organization in New York City last month. He received the award from Suzanne Taylor, NFTE director of events and alumni services. (Contriubted)

Steve Banevedes was one of 21 educators who received a Enterprising Educators of the Year award by the Network for Teaching Entrepreneurship (NFTE) organization in New York City last month. (Contributed)