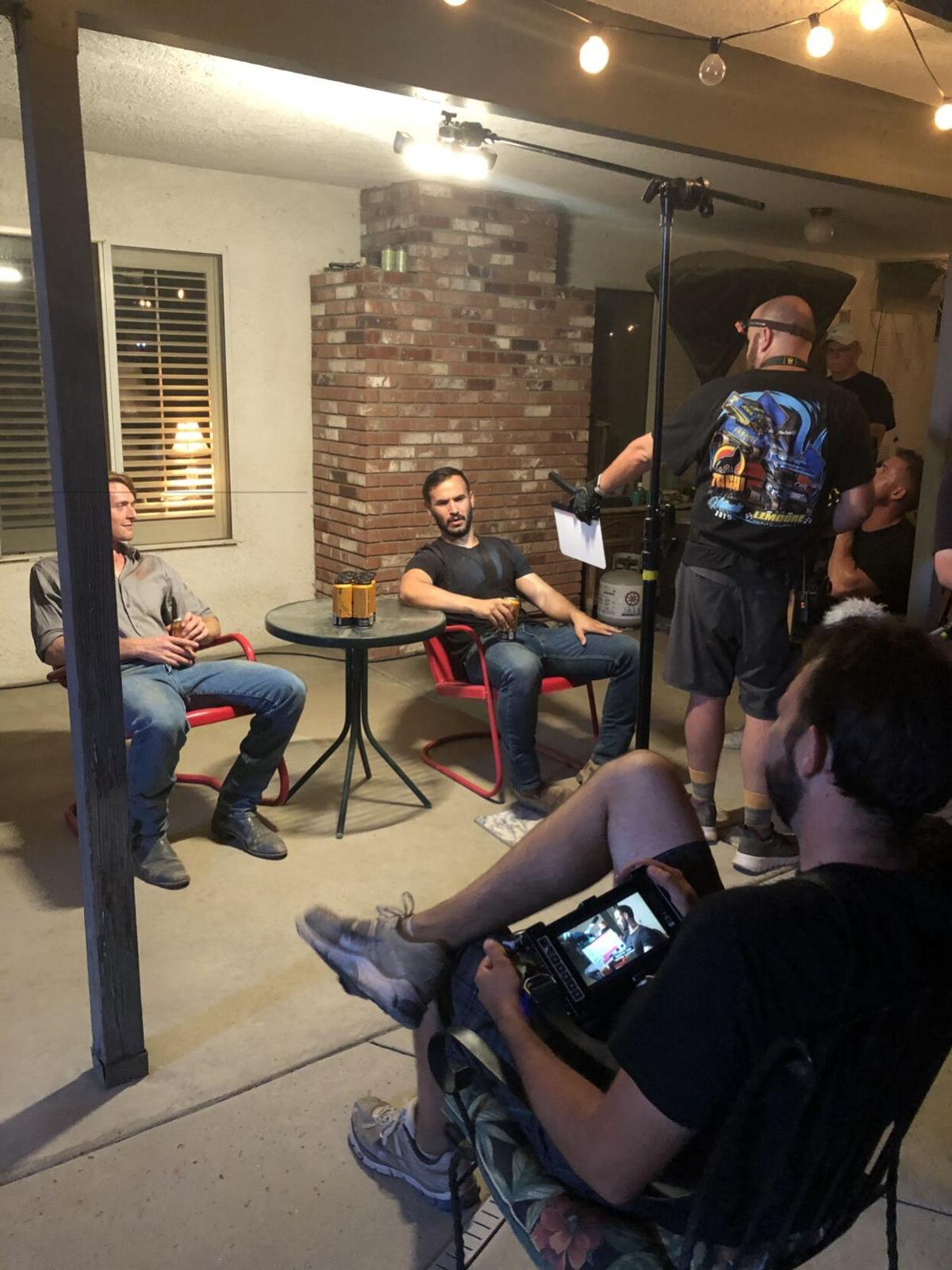 Filmmakers and actors work on the set of "The Sky is Falling." 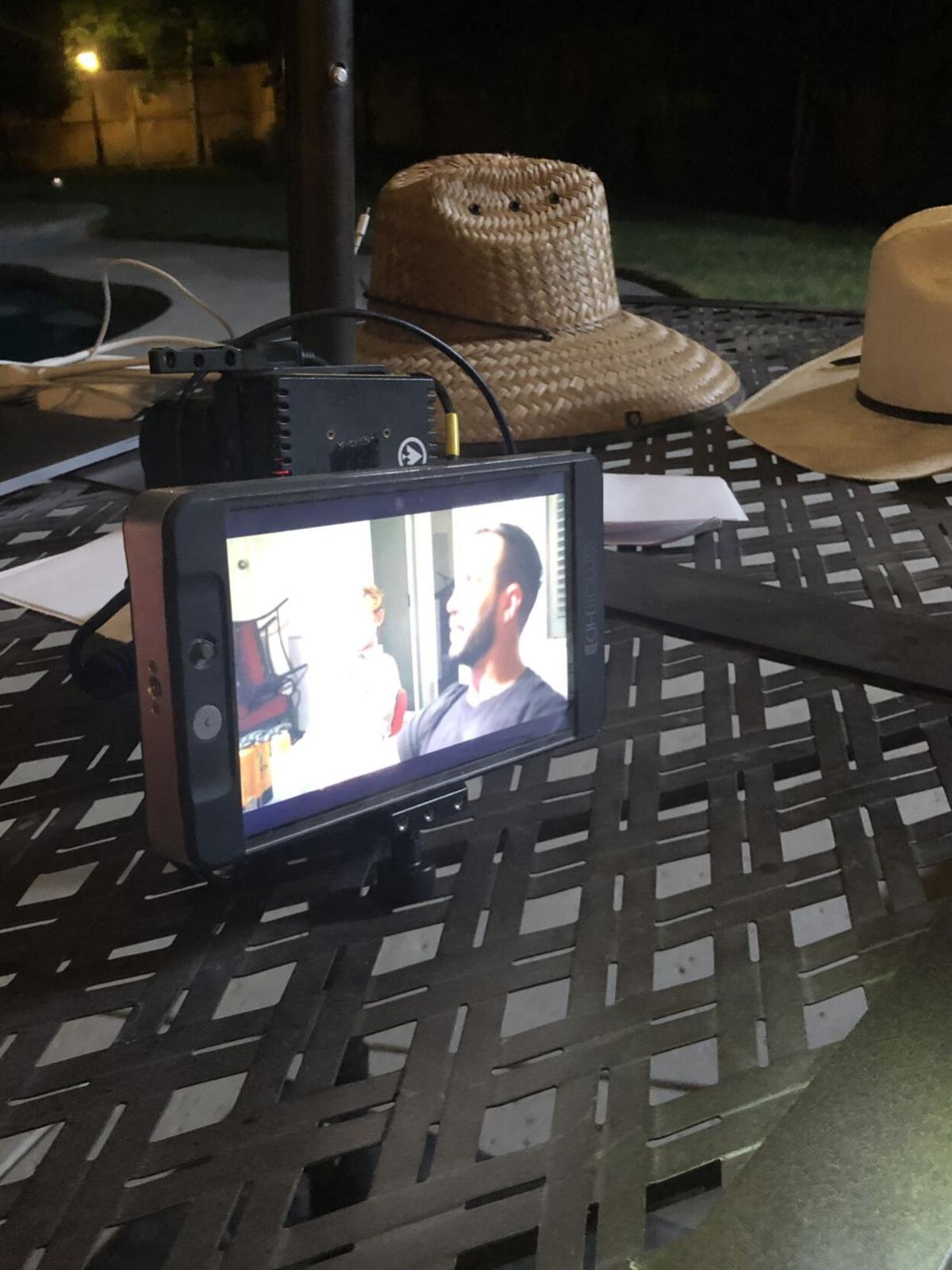 "The Sky is Falling" is currently filming in the Central Valley.

On Aug. 22, I had the pleasure of getting to be part of a local film production based out of Fresno County.  As a kid, I’d steal (borrow) my dad’s camcorder — when cassettes were still a thing and the advent of solid state memory cards/drives were still just a dream.

I mostly stuck with homemade Christmas videos with friends from school.  Honestly, they weren’t very good.  My love for filmmaking transcended into making Writing and Author Interview vlogs for my YouTube Channel. These are far better quality.

But my experience the other week had me working in front of the camera.  No dialogue.  No character name.  Just a bald guy in a simple black suit, white shirt and black tie.  What I’m saying in a round about way is that I was a background actor in a locally produced science fiction film project entitled “The Sky Is Falling.”

The film was written, developed and directed by Easton native Jared Belt, a graduate of Immanuel High School in Reedley and Biola University’s School of Film in Southern California.  Belt first found interest in filmmaking in middle school and his love for the creative process has yet to be squelched.

“I love storytelling,” Belt said in interview while striking one set location and preparing to transport all of the equipment and actors to the next location.  “When I was in junior high I started getting into watching the behind-the-scenes features in movies and I started getting more interested in the behind-the-scenes stuff than the movies themselves.”

Belt’s cast and film crew include many of his film school contacts, all of whom have their specialties both in front of and behind the camera.  Many of the background actors helped out behind the scenes with sound, cameras, lighting, assistant directing and set dressing.

Having done stage work in high school and college, I understood that a lot of work goes into putting a production.  And while I have been to tapings of TV shows, I’ve never personally worked on a film set.  The experience was amazing but I was unprepared for how many different angles might be involved in filming just a single scene.

Just filming an action scene with a pair of SUVs racing into a target location required nearly two hours of staging, setting marks, as well as prepping the camera with different lenses and angles.  It’s so much more than actors learning their lines and blocking and making sure they are prepared for when the cameras roll.

When asked why he is filming in the Central Valley rather than in LA where most television and film projects are produced, Belt’s answer was refreshingly honest.  “Being a filmmaker, I can theoretically make movies and be creative anywhere.  The Valley is home and I wanted to prove that movies can be made outside of Hollywood.”

Based on my experience with seeing Belt direct his cast and crew, he’s well on his way to proving that Hollywood isn’t the only place movies can be made.  And given the new atmosphere of creativity set by Covid and the availability of relatively inexpensive filmmaking tech, Belt has both the tools and talent to make a name for himself as an indie creator.

Belt plans on finishing his film’s production completed by the start of 2021 with intentions to submit it to the festival circuit as soon as possible.  While I have a base understanding of the plot, I was asked by Belt and his production team to refrain from divulging any specific details about the film.

Fun fact, Carroll — who plays the film’s antagonist — is also the writer and one of the stars of “Beech Boys,” a short comedy series featured on Amazon Prime Video.

I learned to appreciate action movies under the wise tutelage of my dad while growing up in the '80s and '90s, a prime era of true larger-than…

Filmmakers and actors work on the set of "The Sky is Falling."

"The Sky is Falling" is currently filming in the Central Valley.