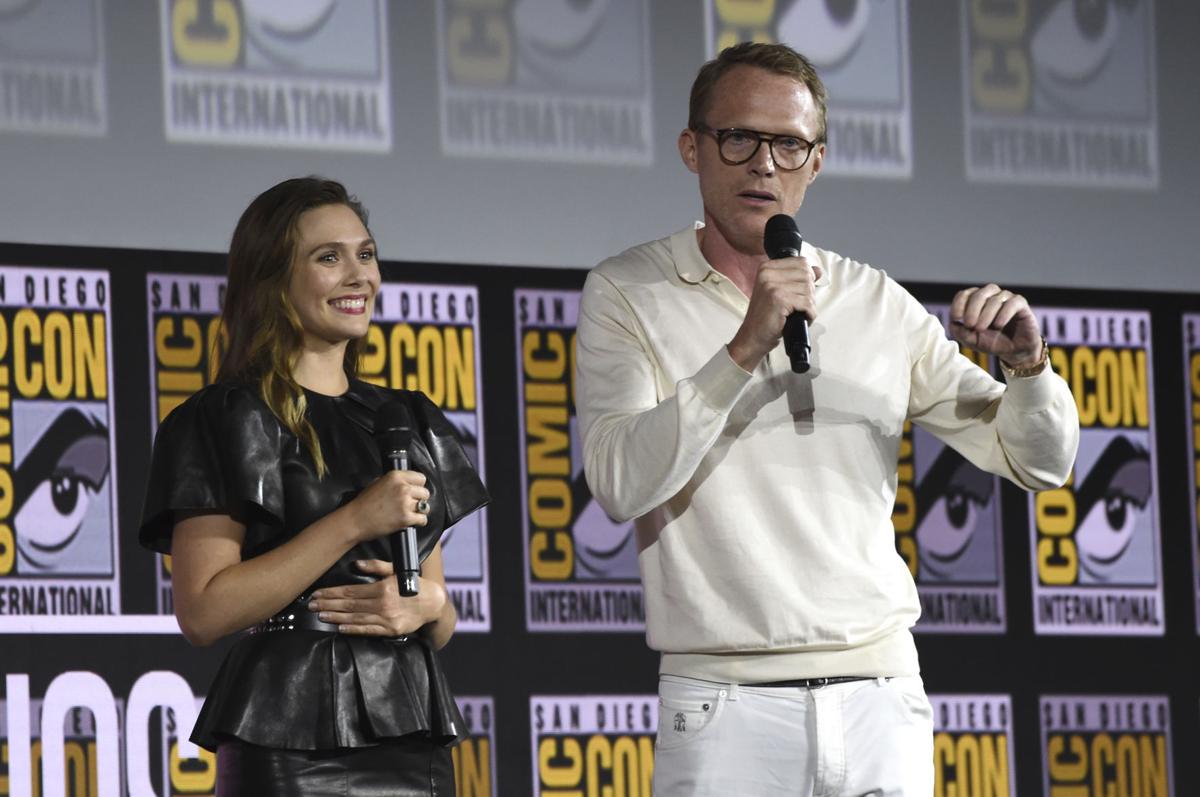 Elizabeth Olsen, left, and Paul Bettany participate in the "WandaVision" portion of the Marvel Studios panel on day three of Comic-Con International in San Diego in this 2019 file photo.

It has been well over a year since a (GOOD) superhero movie was released in theaters let alone anything out of the Marvel Cinematic Universe (MCU).  Many film projects from a variety of studios were either pushed back or canceled because of the pandemic.

Movie theaters around the globe shuttered their doors.  While some reopened — albeit temporarily in the case of Cinemark Movies 8 — others remain out of business seemingly for good just like Downtown Hanford’s Metro 4 Cinemas.

With the business model being somewhat altered, Marvel Studios have emphasized a greater focus on the small screen rather than the big screen.  This seems logical given the partnership with Disney+ as well as Disney’s owning the studio.

Between 2008 and 2019, Marvel launched their film projects in three phases.  Phase One began with 2008’s “Iron Man” starring Robert Downey Jr. and Phase Three concluded with “Avengers:  Endgame” and “Spider-Man:  Far From Home,” both of which released during the summer of 2019.

Phase Four was meant to kick off with the Scarlett Johansson-led “Black Widow” in May of last year.  However that release date was pushed back for obvious reasons.  To get out from behind the eight ball, Marvel has launched the first of its new streaming series, “WandaVision.”

The show had a two-episode debut on Friday, Jan. 15 and focuses on the characters of Wanda Maximoff, aka the Scarlett Witch, and the android Vision.  Both are characters introduced in 2015’s “Avenger’s:  Age of Ultron.”

Both Elizabeth Olsen (“Godzilla”) and Paul Bettany (“A Knight’s Tale,” “Solo”) return to play their characters from the MCU films, using their super powers to understand the world around them.  The show also sports a very unorthodox format.

Each of the nine episodes depicts a different era from television history.  The first episode is filmed in a 1950s-era convention while the second episode is filmed in an early 1960s format with sharper contrasts.  Even secondary characters like Kathryn Hahn’s Agnes function in common tropes associated with those eras

This pattern will continue from one decade to the next over the course of the season.  Olsen’s performance is especially interesting; she fully embodies the character she’s been playing for the last six years while still emulating legendary actresses like Donna Reed and Mary Tyler Moore.

The intrigue of the story is that the viewer already knows there is something off kilter with Wanda and Vision’s relationship and their life in suburbia.  But it gets added to as their world begins to unravel.  Mental Health Awareness is an underlying message of the series.

Wanda’s reality-warping abilities affect her mental health and stability.  The MCU has used the comic book source material as a guidepost while still doing their own thing, and viewers will see her cognitive dissonance become an important plot point as her control wavers.

While the show is still in its early stages it has the possibility of being a strong entry into the MCU’s catalog.  If anything, the fact that it emulates era-specific styles of classic television is a neat hook for viewers.  “WandaVision” has two episodes already streaming on Disney+ with new episodes streaming weekly every Friday.

HMTC This Week: The master of puppets

Puppet making is an art. Puppets can be made in many ways and take many forms. In a recent virtual event that I attended, sponsored by the San…

Elizabeth Olsen, left, and Paul Bettany participate in the "WandaVision" portion of the Marvel Studios panel on day three of Comic-Con International in San Diego in this 2019 file photo.