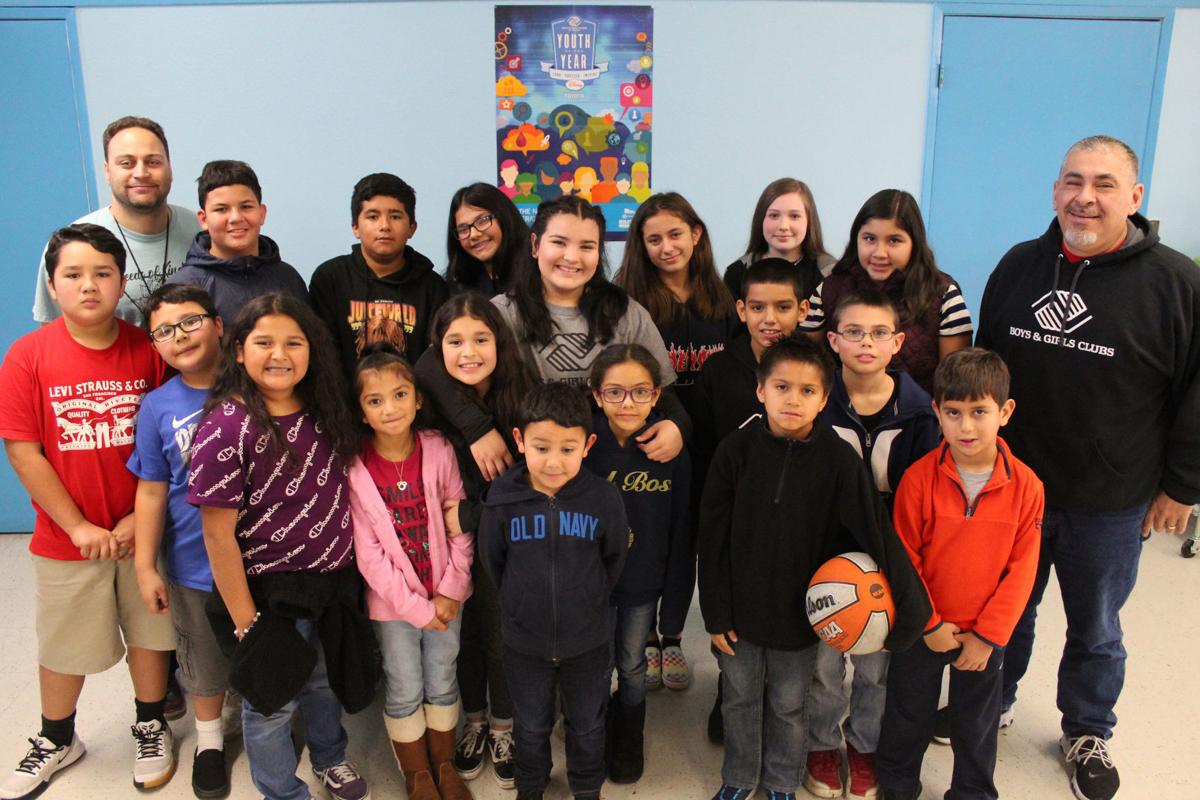 A group of Boys and Girls Club members huddle around Maria Gutierrez who will represent them in the annual Youth of the Year contest on Jan. 23. This is the first time Selma's B&G Club will have a member compete in the event. 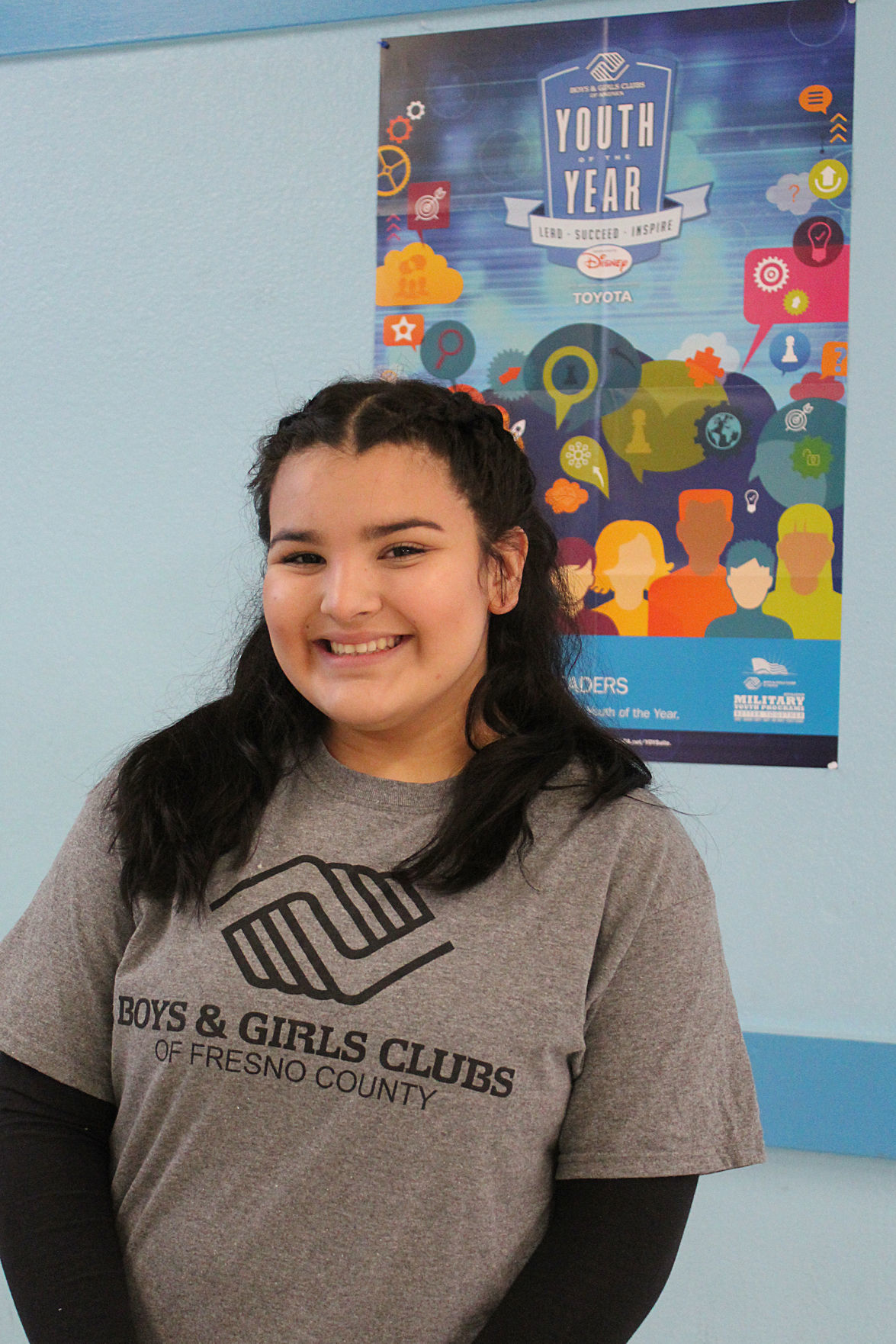 Maria Gutierrez will be the first youth from Selma to compete in the Fresno County Boys and Girls Club Youth of the Year competition. 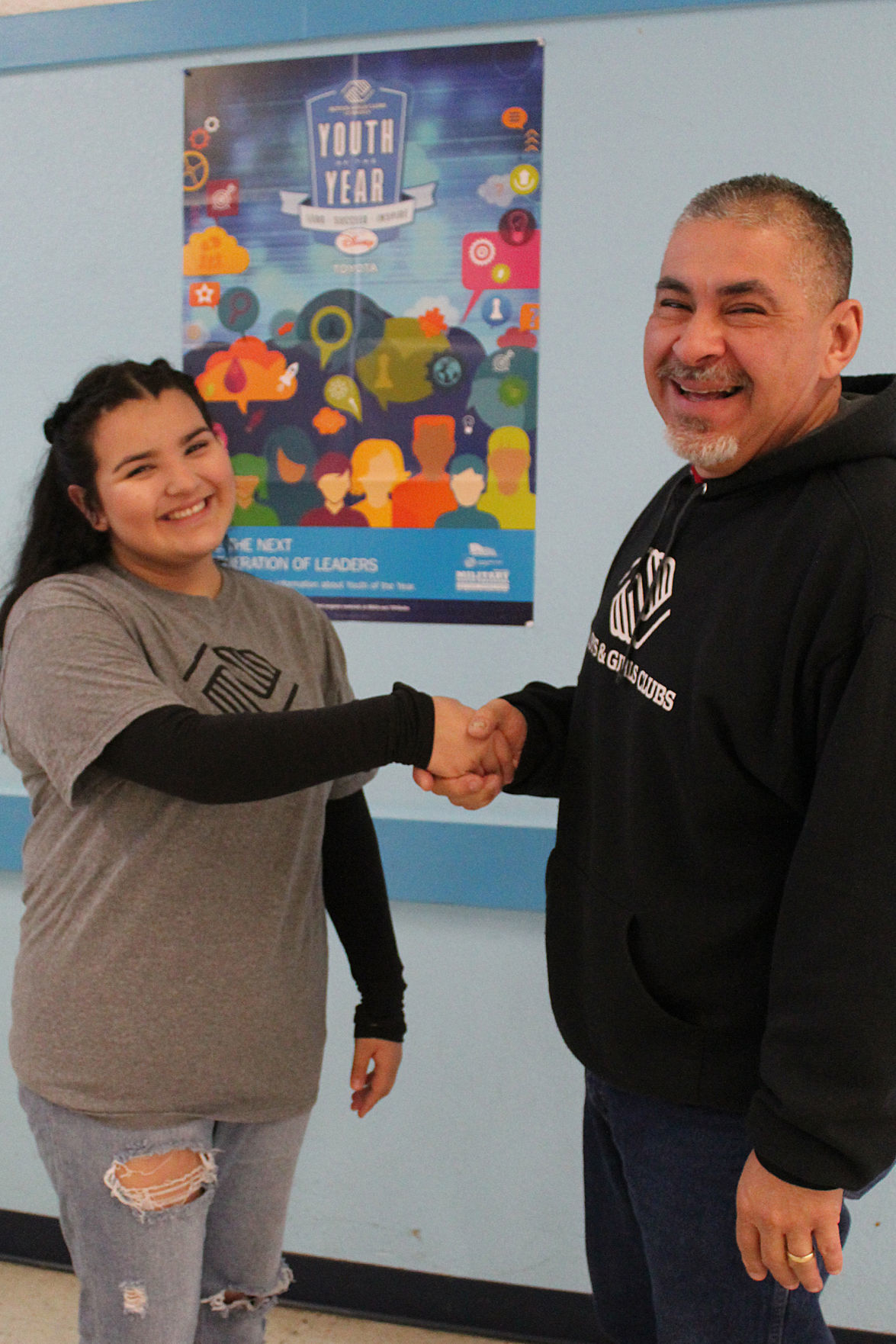 Maria Gutierrez shakes hands with Fresno County Boys and Girls Club Selma Unit Director Mark Armenta. Gutierrez accepted the challenge to be the first Selma student to compete in the Youth of the Year event and heads to the competition in Fresno on Jan. 23.

A group of Boys and Girls Club members huddle around Maria Gutierrez who will represent them in the annual Youth of the Year contest on Jan. 23. This is the first time Selma's B&G Club will have a member compete in the event.

Maria Gutierrez will be the first youth from Selma to compete in the Fresno County Boys and Girls Club Youth of the Year competition.

Maria Gutierrez shakes hands with Fresno County Boys and Girls Club Selma Unit Director Mark Armenta. Gutierrez accepted the challenge to be the first Selma student to compete in the Youth of the Year event and heads to the competition in Fresno on Jan. 23.

SELMA – Maria Gutierrez is about to make Selma history.

The 16-year-old Selma High sophomore is the first Fresno County Boys and Girls Club member from the Selma unit to enter the Youth of the Year contest.

“The contest showcases club members and it’s been going on since 1947. Seeing as how we’re still a new club, my bosses were asking if we had somebody [to nominate],” Mark Armenta said. He’s been the Selma unit director since the Boys and Girls Club first opened at the Salazar Center at 1800 Sheridan St.

“I’m really thankful and I feel really blessed that she’s continuing. We’re two weeks away and I still can’t believe it. But we’re almost there and I can’t wait to see the outcome.”

Gutierrez has been attending the Boys and Girls Club for at least three years now and first came at the invitation of her friend, Mariah Velasco.

Since Gutierrez is the baby of her family, she experienced a role reversal when she walked through the Club’s doors. Now, she takes the big sister role and helps the younger students with their homework, does crafts like finger painting with them and plays on the PS4 with the younger children that are more like siblings now.

Gutierrez said since her parents had separated earlier, her brother stayed with her mother and she’s lived with her father. Her older sister was already old enough to be out of the house and so she’s been feeling alone. Walking through the doors of the Boys and Girls Club has changed all that.

“I found a family here and they made me feel welcomed. I could come here whenever I wanted. Here, I have more Club members I can get a bond to. It makes a really big impact. You don’t think it will, but it does.”

Armenta said he had other Club members in mind to nominate for the Youth of the Year competition, but discipline issues or work opportunities prevented them from participating. With the deadline approaching he asked Gutierrez to step to the plate and she did.

“She’s a role model to a lot of the members just for the fact she’s the first one competing,” he said.

Gutierrez said she realizes she’s representing more than just the Club at the event, but also the entire community. That reality was a little overwhelming and she admits she felt like giving up at times as they scrambled to meet all the requirements to compete.

First, they had to play catch up and apply by having Gutierrez get letters of recommendation, write a resume, cover letter and three essays. Then, she has to give a speech based on those essays about obstacles she’s had to overcome, about her experience at the Club and what matters to her most in life now.

At the competition, which takes place at the Zimmerman Club, 540 N. Augusta St., Fresno, on Jan. Jan. 23, Gutierrez will also be interviewed by a panel of judges and then give her speech in front of a crowd of an anticipated 300 people.

“I’m shooting for first, but as long as I place first through third, I’d be happy with that,” she said.

The competition moves on to Sacramento for the state level and then goes on to regional and national events. As it progresses, winners earn more and more scholarships with national winners earning a car and a trip to the White House and college tuition.

“It’s a big thing if you win,” Armenta said. “This is something I’ve wanted to do since we opened up. The Club isn’t just about little kids; it’s about big kids, too.”

No matter how Gutierrez places in this event, she’s already winning in life as she’s realizing her life goals are hers to set and meet.

Gutierrez has a goal to become a nurse practitioner and in her speech, she recounts about the realization that she wanted to make changes in her life, set goals and life’s obstacles as motivation to prove that she is capable of accomplishing those goals.

“Those words and doubts about myself would no longer define me. I learned about college and started thinking about my future.”

As she rehearses her speech again at the Club, she switches between English and Spanish, recounting how the words, ‘you’ll never be good for anything’ played over and over in her head.

After she started attending the Boys and Girls Club, the staff and other students there became her allies, she said.

“The Club made me feel like I belonged. My presence actually made people smile brighter and I could feel the love when I walked through the door. Mark became a father figure for me and there were times I relied on him for strength. The Club was a safe place to laugh [and] cry at. Without the Boys and Girls Club and the staff, I feel like I would have gone down the wrong path.”

Gutierrez joined the Club’s Keystone Leadership program and has a close connection with those members as well as they support her in getting her homework done. She said issues have surfaced, but with continued support at the Club and the staff, “drawbacks won’t affect my commitment towards my future goal.”

Gutierrez said she’s working to get a worker’s permit to help pay household bills and “eventually save for college. My goal is to become a nurse practitioner. I know it’s quite the commitment, but I’m willing to put in the work. I enjoy helping people and I want to give back to the healthcare community.”

She’ll be taking a CNA class and medical terminology class while she’s a junior and senior at Selma High and plans to be ready for college by the time she graduates.

Gutierrez said she’s overheard all the other competitors as they’ve rehearsed their speeches and each has different obstacles they’ve overcome.

“Everyone’s unique and has their own story [but] I wouldn’t be up here without the loving support the Club’s given me. I rely on the Club every day.”

Armenta said he hopes Selma residents realize the effect the Club is having for the different students that attend, from high school through elementary age.

“There’s so much to talk about the Club. I wish the community would not just think it’s on the rough side of town. It doesn’t matter what part of Selma you live in, it’s a place for kids to come and be kids. It’s a great feeling to come up here and be part of this community knowing that we make an impact.”

To learn more about the Boys and Girls Club or send well wishes to Maria Gutierrez, contact Mark Armenta at marka@bgclubfc.org