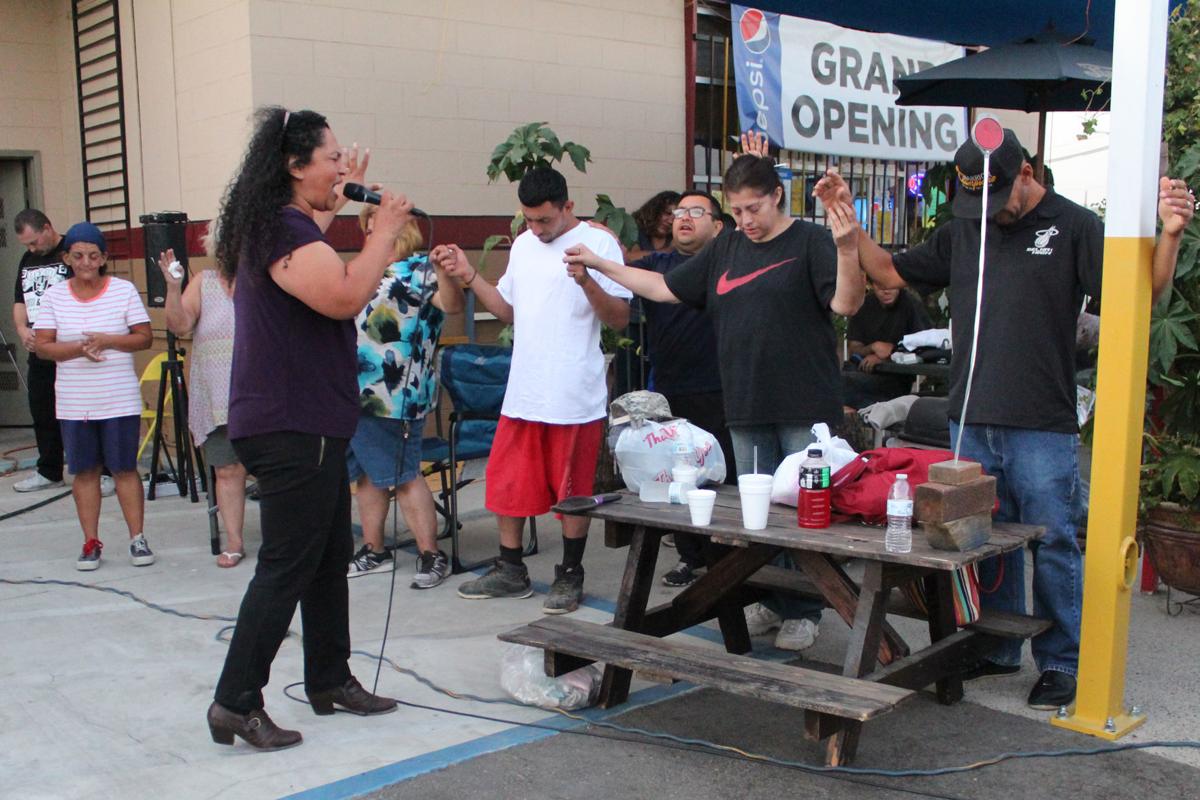 Delfina Vazquez with the Selma Community Outreach Ministries has teamed up with Fidel Manzano with the Extending Hands Ministries to open up showers for the homeless on the grounds of Manzano’s church. Here, Vazquez prays with people during the Sept. 7 event. 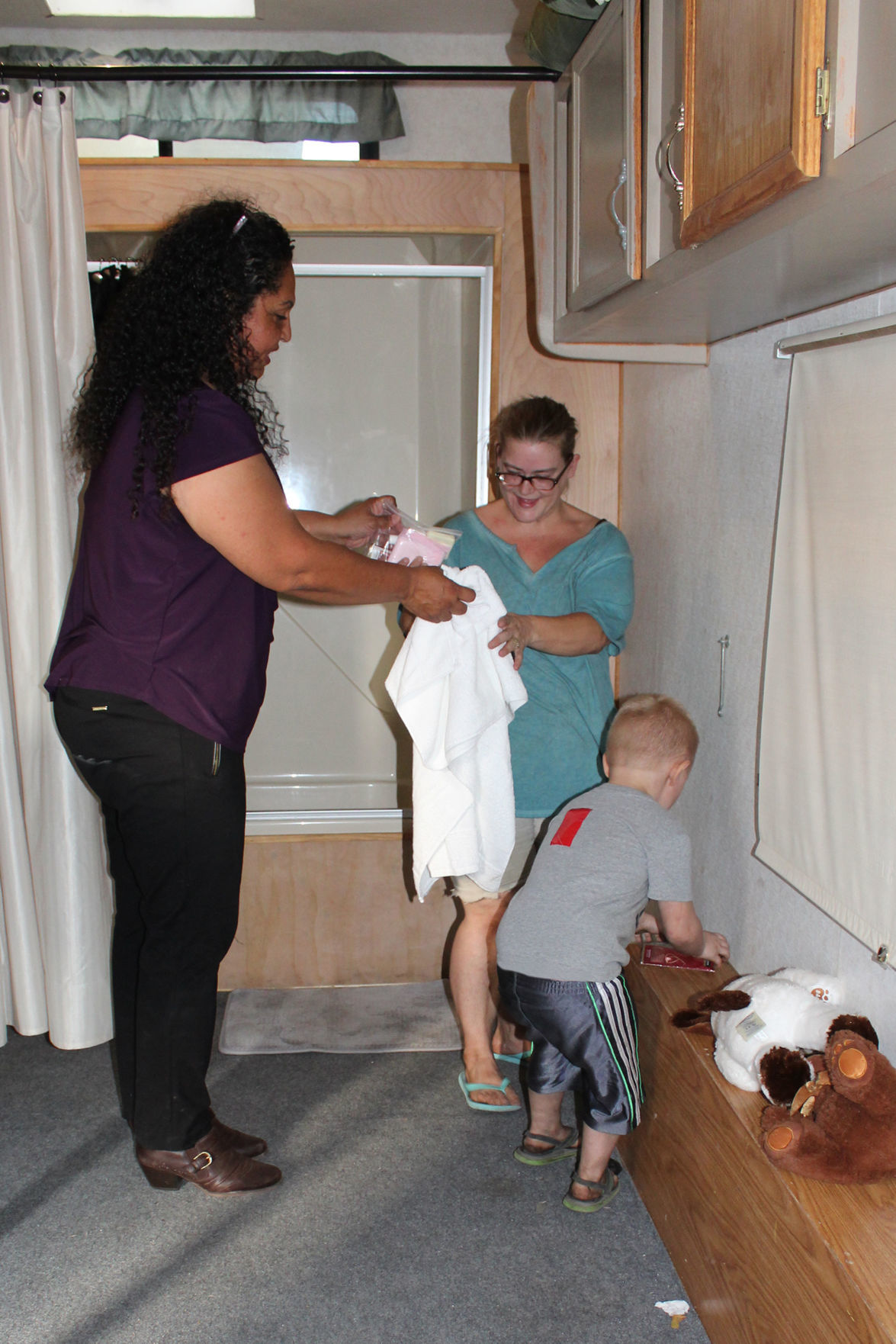 Selma Community Outreach Ministries’ Delfina Vazquez offers a towel and toiletries to a mother and her son who are about to take showers in the RV Vazquez had converted into three shower stalls. Donations of towels, shampoos and soap among other toiletry and clothing items are being accepted. 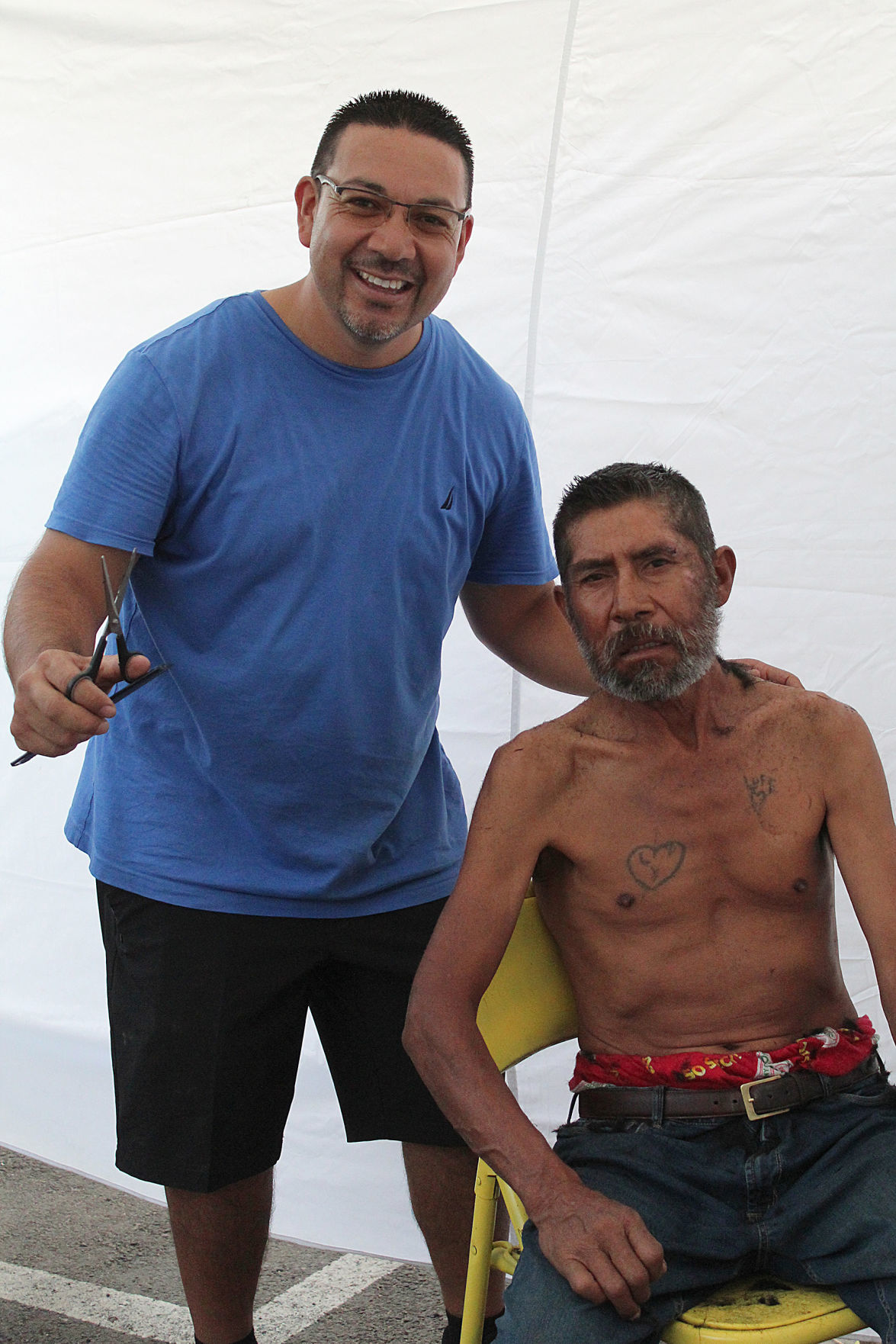 Free haircuts and a fresh change of clothing are made available during the Selma Community Outreach Ministries showers. Donations of men’s and women’s clothing are being accepted. 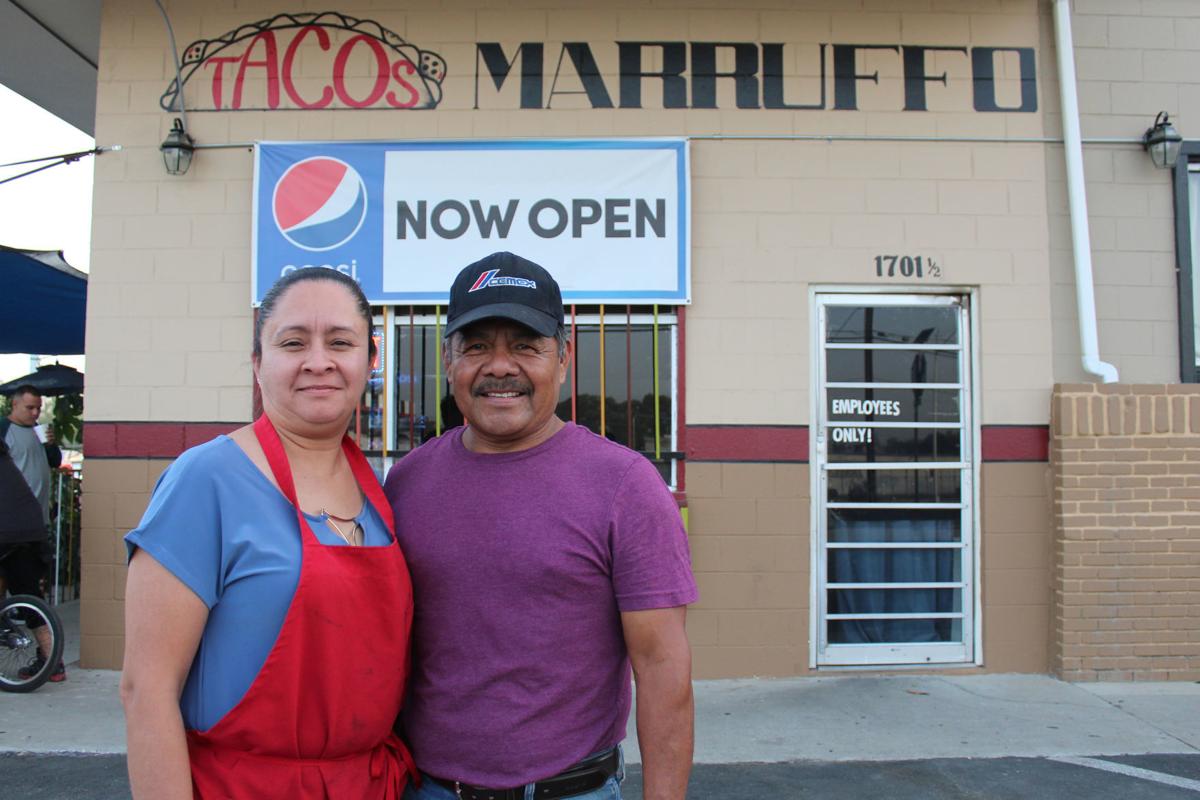 Fidel Manzano stands with his wife in front of the Extending Hands Ministries. A taqueria on the side helps fund their missionary and local ministry efforts.

SELMA – It’s been five years since Delfina Vazquez first got one call. Then two years ago, she got a second call. It wasn’t a message on her cell phone, but a divine calling to help the homeless.

“I was literally debating with God saying, ‘can you give me something else?’” she said of the first inspired message to feed the homeless. “But this is what He gave me. He put some love into my heart and that makes it easier when you’re doing this ministry to where I really enjoy working doing what I do now.”

Vazquez formed the Selma Community Outreach Ministries and has since been working with a group of family and volunteers to bring food, clothing and a message of hope to the homeless living in and around Selma. When she started, a Point In Time count showed there were 34 homeless. That number has since ballooned to 150 people.

“We’ve counted them,” she said. “I did the Point in Time count myself with MAAP [the Multi-Access Agency Program.]”

Another unmet need the homeless had was a safe place to take a shower.

“When the Lord says it, I’m like, ‘okay, let’s do it.’ So we began to work on that process. The first place we were going to build it didn’t work out, but that’s ok. It looks like God had a better plan.”

An RV was purchased and G’s RV in Dinuba installed three shower areas. The RV is also outfitted with a refrigerator, stove and working microwave to serve as an emergency shelter for women with children to cut down on hotel expenses.

“It took a little bit to get everything into the showers for it to work. Praise the Lord, we got it running and last week was first time we ran the showers.”

Among the 19 people taking showers was one man that was especially excited, she said.

“I asked him how long it had been since he took a shower,” Vazquez said. “He just blew our mind. He said it had been one year since he’d taken a shower.”

During the second week of offering the portable showers, Vazquez teamed up with Fidel Manzano who operates the Extending Hands Ministries at 1701 Whitson. On Sept. 7, the RV was parked on that church’s parking lot and teams of volunteers handed out packages of toiletries, clean towels and clean clothing and gave free haircuts. Pastor Paul Rojas showed up with a team from Fowler’s Worship Center with ice chests filled with food and water.

“It’s really been a lot of the community coming together to make this happen,” Vazquez said. “This is not a one-man effort. There’s no way. Everybody, as you can see, comes out to help with the clothes and the food. Brother Fidel, this is his location here. To be able to run this ministry out of it is perfect [because] this has everything we need. It’s like God ordained it. It’s just all came together.”

Vazquez said she’s hoping that Selma residents and civic leaders will get behind this effort since the numbers of homeless will likely not subside any time soon.

“A lot of people really want to help somehow, but they have no clue how. This is just the beginning of what I believe God is doing. We really need a lot of help with the shower ministries in terms of the resources that are needed.

But providing showers and a warm meal is just the start of the effort to deal with the multi-faceted needs of the homeless.

“The showers are not to be a hand-out. The goal that I want people to really understand is, this needs to be a hand up. We want to not just provide showers, but we want to provide resources for them. We’re really focused on getting to the root of the problem. We’re not trying to put a Band-Aid on anything. I believe we have a process and a system in place to make a real dent in the community.”

The next step is to bring in agencies during the shower ministry such as the Multi-Access Agency Program and the Selma Resource Center, the Fresno Madera Continuum of Care, United Health Centers and Selma Adventist to start addressing physical and mental health needs the homeless have. Meanwhile, a grant from WestCare will fund rapid rehousing for the homeless so they can get off the streets immediately and then on to more stable housing.

One of Manzano’s local goals for the Extending Hands Ministries is teach the homeless building skills so they can help construct the men’s shelter and gain job skills. Right now, they’re awaiting a HUD grant from the Fresno Madera Continuum of Care to purchase building supplies.

“Building a men’s shelter here upstairs is in the process and in the works,” Vazquez said. “Mark [Peterson] is helping us with that,” she said of Selma C.O.M. Board member Mark Peterson. Peterson previously helped the churches meet legal requirements to operate as non-profits and be eligible to apply for grants.

“What I’d really like to do is develop a model to address homelessness that’s really community based,” Peterson said. “Every city has homeless issues, and they have a whole bunch of organizations doing their part, but there isn’t a unified, community effort.”

This would entail building relationships and support systems for those who are chronically homeless, he said.

“The key is to develop that community-based model. I think in addition to showers, emergency housing and developing some transitional housing options, I know Delfina’s interested in doing job development and employment training with job mentoring. There are a number of things that could be done. It’s not just giving money, but getting involved in people’s lives. I’ve found it’s scary at first, but if you have somebody to bring you along, it’s really a lot of fun and fulfilling. Just making [code enforcement] laws doesn’t fix it.”

Manzano encourages residents to stop by to see how the ministry works. And if it’s around meal time, they could patronize the Tacos Marruffo taqueria on the side of their building to help fund the ministry’s efforts.

“When we started here three years ago, the city knew what was going on here,” Manzano said. “There was tagging and the homeless were living in here. It was bad, but we took over, we cleaned it up and we know everybody so we work with them. We opened up the taqueria to make funds. We invite anybody to come and see what’s happening,” he said.

Vazquez adds that she hopes community members and civic leaders will partner with their efforts to tackle the homeless’ needs, whether that’s through financial backing, job mentorships, work projects or donations.

“We don’t want to enable the homeless. We want to help them, so we want to partner with organizations that are willing to provide job training for our guys. Somebody needs to give them an opportunity. We’re definitely going to be making a dent in the problem that’s actually the City’s problem, but as servants of the Most High, that’s what God calls us to do. We do it because we love Jesus, first of all, and we love serving the community that we serve. They have the biggest need.”

The Selma Community Outreach Ministries, at 1880 Art Gonzalez Parkway, provides spiritual, physical and emotional support to individuals and families who are hungry or homeless. They’re partnering with Extending Hands Ministries, at 1701 Whitson, to offer showers, clean clothing, haircuts, meals and various services to the homeless. The nonprofit is accepting financial donations at either location or at P.O. Box 955, Selma, 93662.

SELMA — A new mural in Selma that will be completed this weekend honors Chicano arts, the farmworker and labor rights movements with its messa…

Olivia Virginia Raven turns 100 years young on Sept. 24. She was born on a dairy near Lemoore, California to George and Virginia Rocha, who ha…

Raisin Capital of the World: Selma history is our history

As I was sitting at my desk, Mayra, the Chambers Office Assistant, asked me if I knew who’s birthday it was and I threw out several names that…

Sahota announces bid for SUSD board of trustees seat

My name is Narinder "Nick" Sahota, and I am running for Selma Unified School District's Board of Trustee seat in Area 2.

CENTRAL VALLEY — When entering hospitals, the new norm for patients is to be greeted by nurses, doctors and other healthcare workers who are w…

Delfina Vazquez with the Selma Community Outreach Ministries has teamed up with Fidel Manzano with the Extending Hands Ministries to open up showers for the homeless on the grounds of Manzano’s church. Here, Vazquez prays with people during the Sept. 7 event.

Selma Community Outreach Ministries’ Delfina Vazquez offers a towel and toiletries to a mother and her son who are about to take showers in the RV Vazquez had converted into three shower stalls. Donations of towels, shampoos and soap among other toiletry and clothing items are being accepted.

Free haircuts and a fresh change of clothing are made available during the Selma Community Outreach Ministries showers. Donations of men’s and women’s clothing are being accepted.

Fidel Manzano stands with his wife in front of the Extending Hands Ministries. A taqueria on the side helps fund their missionary and local ministry efforts.