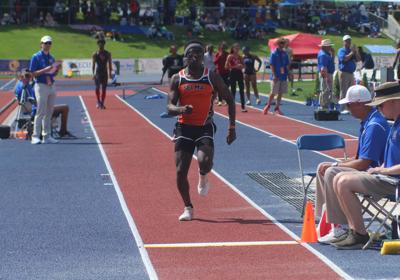 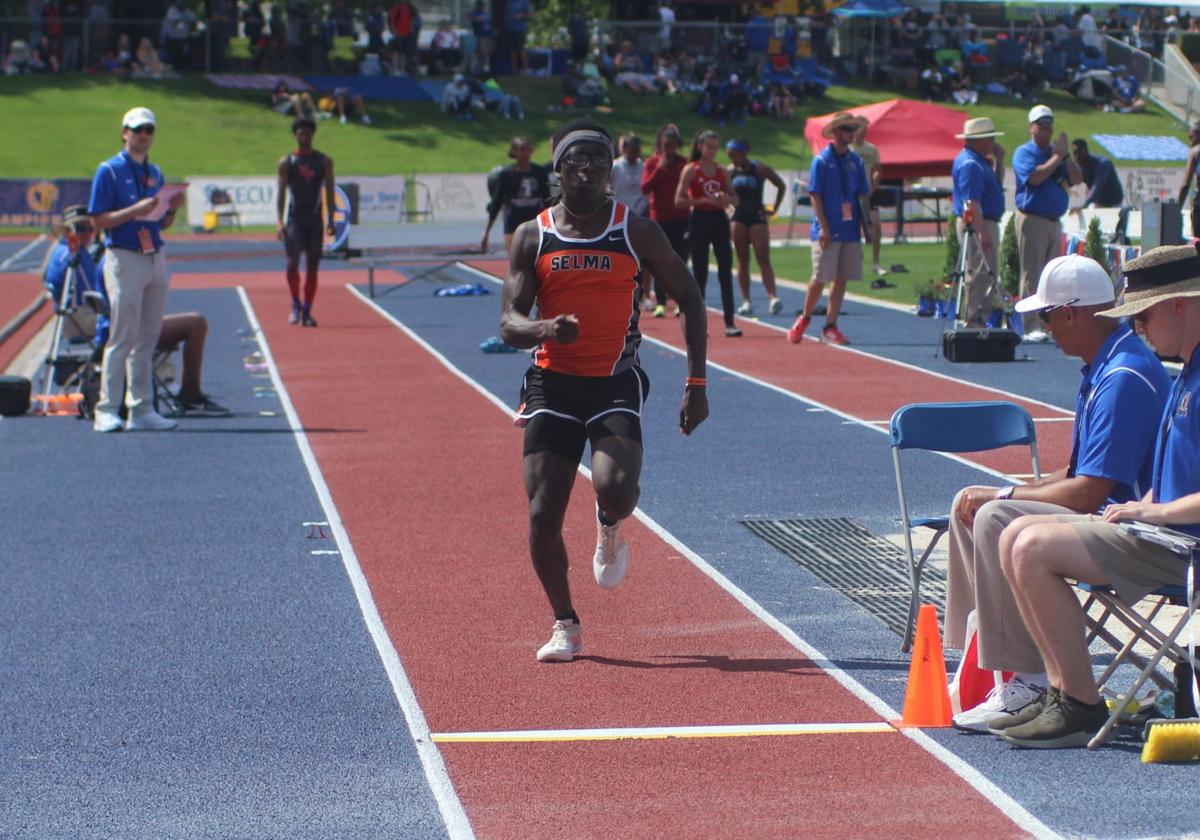 Recent Selma High graduate DeAndra McDaniel sprints before attempting to jump into the pit during the long jump preliminaries at the 101st annual CIF State Track & Field Championships at Buchanan High School on May 24. McDaniel is slated to begin his collegiate career for the University of California, Berkeley Golden Bears. 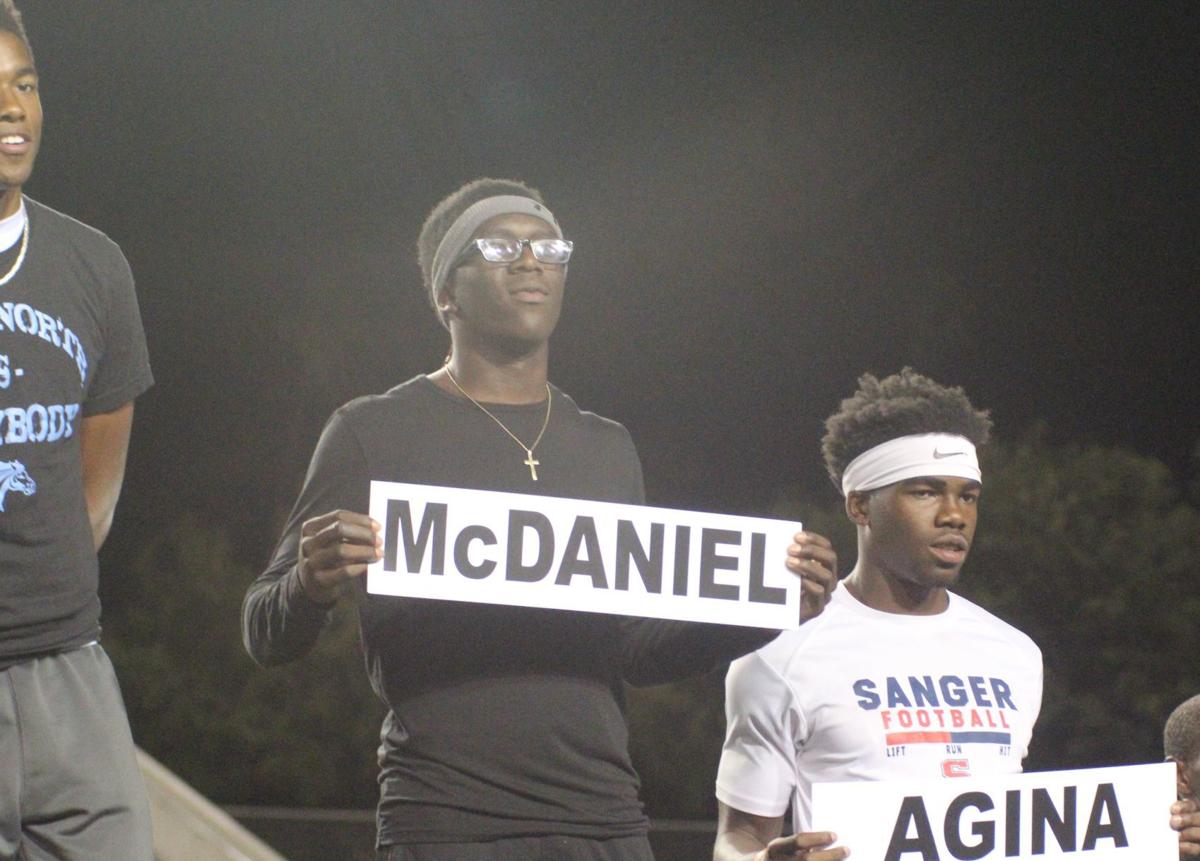 In this Enterprise Recorder file photo, recent Selma High grad DeAndra McDaniel stands on the podium after finishing second in the triple jump event at the 101st annual CIF State Track & Field Championships at Buchanan High School on May 25. McDaniel earned the school's first state medal in track since 2007. 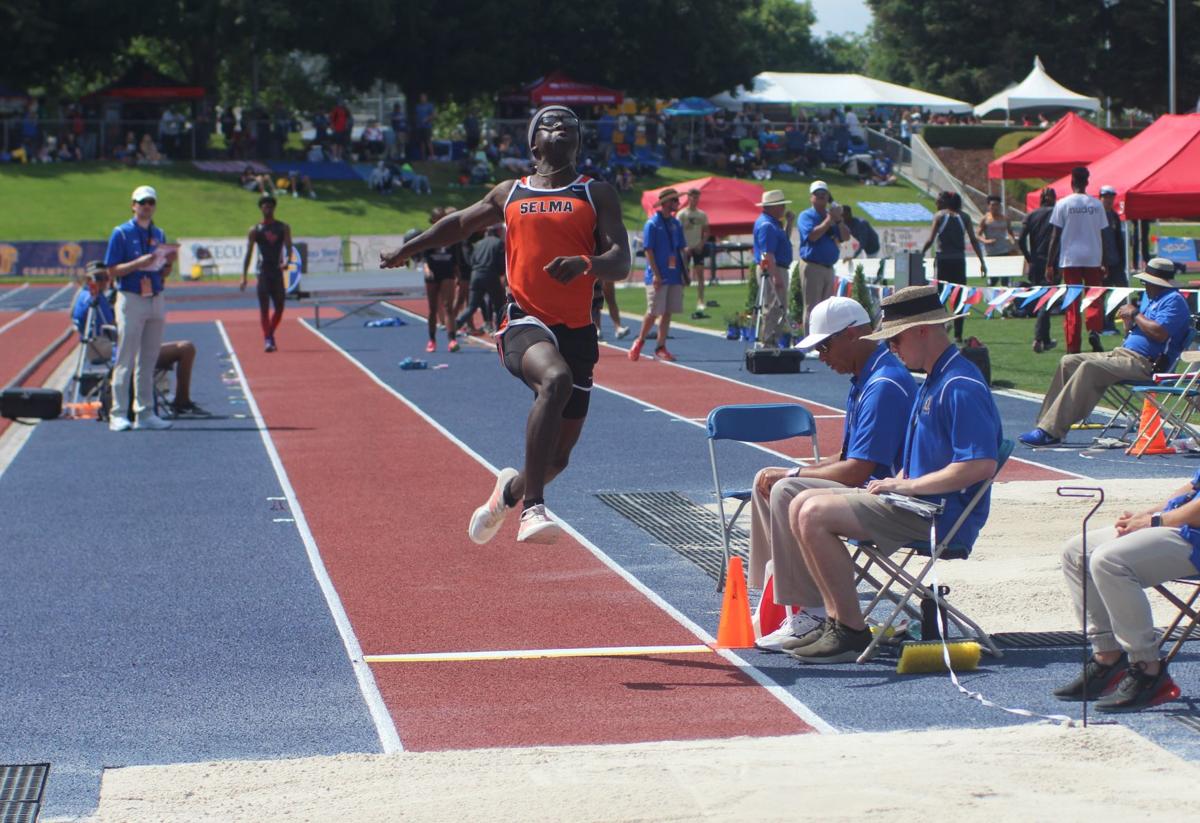 In this Enterprise Recorder file photo, recent Selma graduate jumps into the pit during the preliminaries of the long jump event at the 101st annual CIF State Track & Field Championships at Buchanan High School on May 24.

SELMA - When DeAndra McDaniel stood on the podium at the CIF State & Field Championships on May 25, it was an accumulation of his work ethic, faith and determination.

McDaniel concluded his prep career by placing second in the triple jump at the state meet, earning Selma High’s first state medal since 2007.

Since graduating from Selma High in June, McDaniel’s primary focus is preparing for his freshman season for the University of California, Berkeley track and field team. Along with the long jump, McDaniel will continue to compete in the triple jump for the Golden Bears. But before he made his final high school jump in May, McDaniel had to endure several obstacles that molded him into the person he is today.

“I lived in hotels, I lived out the car and I lived couch to couch for most of my life,” McDaniel said. “It was things like that. Sleeping on the ground. Doing homework in the dark with my phone light and I started to get used to it to be honest. I felt like it built this armor around me like nothing could stop me.”

During the first few months of his sophomore year at Selma High, McDaniel abruptly moved to Sacramento with his mother Gwendolyn. McDaniel would spend the rest of his sophomore and junior years at Natomas High School, which is located north of Sacramento. The unexpected move occurred during an emotional year for McDaniel, who as a freshman dealt with the death of his father Kevin McDaniel Sr.

DeAndra and his mother moved back to Selma before his senior year. He didn’t disclose the specific reason for the moves to Sacramento and back to his hometown, but he said the relocation to Northern California was a necessary part of his journey.

“I lived in Selma, but I felt like I became a man in Sacramento because of the things I went through there,” DeAndra said. “A lot of people probably wouldn’t understand it even if I said it blatantly.”

Another hurdle of DeAndra’s journey in Sacramento was walking approximately two hours to school from a hotel him and his mother were living in at the time. After school and track practices, he would walk the same way back, do his homework for Advanced Placement classes and continue the routine the next day.

“I’ll immediately do homework and then go to sleep at 3 a.m. and wake up at 6 [in the morning] and just repeat,” DeAndra said.

Selma head coach Alex Reyes recalled the time DeAndra contacted him about the abrupt move to the state capitol. Reyes said he told DeAndra that he had "to roll with the punches" and "make the best out of the situation."

“It’s easy to look back and say ‘Why me? It’s not fair, this isn’t what I want,’” Reyes said. “Him being able to overcome that and see the positive out of the negative is immense. He obviously wouldn’t be where he’s at now if he would’ve given up and thrown in the towel... I think he sees the bigger purpose.”

Despite his hardships, DeAndra kept himself motivated through his faith and has moved on from that adversity by earning an athletic scholarship at Cal.

Growing up in a family of track athletes, it seem destined for DeAndra to have life revolve around the sport. DeAndra is the youngest of seven brothers and sisters - all of whom competed in track in high school - but he’s not the first one to compete in the sport at the next level. His older brother Donte was a jumper and sprinter at Fresno Pacific University and their older sister Keenya was a sprinter at San Francisco State. Gwendolyn was also a track athlete growing up.

“DeAndra always came every single day to practice and gave 110 or 1,000%,” Reyes said. “With everything he did, he knew he wanted to do this at the next level.”

DeAndra said Donte would be his biggest influence growing up. DeAndra started to gain interest in track at a young age because of his older brother. Over time, DeAndra said he wanted to become a better athlete than Donte, which is part of the friendly competitiveness between the two.

“He really set the tone for me,” DeAndra said about Donte. “I’m really grateful that God gave me a person like that in my life.”

DeAndra started competing in track during elementary school, along with playing flag football and basketball, but when he entered the ninth grade, he started thinking about his future. DeAndra decided that track could be his outlet for college opportunities.

“I had to start evaluating myself,” DeAndra said. “‘Why am I doing this for?’ The situation that we was in and what I felt like was my purpose is my purpose. I felt like it all tied into track and I started to realize that I could fix both situations at the same time.”

Early in his prep track career, McDaniel competed in various events including the 100 and 200 meters, along with the 4x100 meter relay event, but it was the long and triple jumps that he always excelled at. As a sixth grader, McDaniel said he knew those would be his two most successful events.

“At the beginning, I was always way ahead of everybody and then I started branching out into bigger meets in Fresno and then I was like ‘Okay I’m getting second,’” DeAndra said. “I was confused because I would always beat people by 10 seconds in the 100 when I was in fourth grade. So I went to the jumping events and than I was ‘Okay I’m undefeated. I think I like this a lot more. I think it's tailored to what my talent is.”

Standing on the podium at the CIF State meet at Buchanan High was a successful conclusion to his prep career, but it was part of a journey that McDaniel says isn’t finished. Earning a state medal was another tough task in itself, as he had a “rough” season that included injuries and fouling multiple times at various tournaments throughout his senior season.

Through all the adversity he endured on and off the track, DeAndra said those experiences were worth it after ending his final high school meet as a state medalist.

When reflecting on his final prep tournament, McDaniel said he was initially speechless when he received his medal, but it’s a moment that he will forever consider “awesome.”

McDaniel placed second in the triple jump with a mark of 48 feet and 2 ¾ inches, which is a personal record. He finished second to Clovis North’s Caleb Foster, who recorded a career mark of 49-09.50. McDaniel became the program’s first state medalist since Rosario Sanchez placed first in the shot put in 2007.

The future California Golden Bear set his PR on his second attempt in the finals. His second best mark was 47-00, which was his final high school jump. DeAndra set his previous career best at 47-10.75 at the Arcadia Invitational in Southern California in April. DeAndra didn’t qualify for the long jump finals at the state meet, but it was his second-straight season competing in both events at the tournament. It was also DeAndra’s third consecutive year competing in the triple jump at the state meet.

As a junior for the Natomas Nighthawks, DeAndra placed fourth in the triple jump. The previous year, DeAndra competed at the state meet for the first time and finished in seventh place.

“Last year at state, the first jump that I had in the finals I flipped over,” DeAndra said. “Everybody in the stands, I could bet you that they were all counting me out, all of them. I got up and I just shook my head off because it was nothing compared to what I went through the whole year. So I kept going and I got fourth. Same thing this year, people were obviously counting me out because my marks weren’t crazy.”

Preparing for Cal, his future

Being counted out and overlooked is part DeAndra’s underdog mentality, which won’t change as he begins his collegiate career at Cal. DeAndra said he’s thrilled to meet a diverse group of people and compete as a Division I athlete in the Bay Area. McDaniel hasn’t declared a major, but he’s interested to learn how the mind works.

“I realized through my years things like insecurities and past trauma could have an affect on the way you think,” DeAndra said. “Your mindset is really everything.”

He said another option for him is to major in business.

“With me, I don’t want to just do one thing,” DeAndra said. “A lot of people, they’ll just label me as an athlete, but honestly I want to do everything that I’m able to do. Any skill that I’ve ever progressed in the past, I want to use it in the future.”

DeAndra’s long term goal is to be known as “more than an athlete,” but as a competitor he wants to become a professional track athlete and possibly participate in the Olympics in the future. Competing at the 2024 Summer Games in Paris is something he didn’t rule out, but his academics and collegiate career is his current focus.

This is reporter Jeremiah Martinez' Gruner Award-winning story, as originally published on July 17, 2019.

Column: Halfway through a historic year

We have six months left of 2020 and it’s definitely a year that I won’t forget.

Alex Perez moves past UFC 250 win, awaits his next fight

After an incredible performance at the UFC 250 prelims, Alex Perez is already waiting for his next opponent.

Recent Selma High graduate DeAndra McDaniel sprints before attempting to jump into the pit during the long jump preliminaries at the 101st annual CIF State Track & Field Championships at Buchanan High School on May 24. McDaniel is slated to begin his collegiate career for the University of California, Berkeley Golden Bears.

In this Enterprise Recorder file photo, recent Selma High grad DeAndra McDaniel stands on the podium after finishing second in the triple jump event at the 101st annual CIF State Track & Field Championships at Buchanan High School on May 25. McDaniel earned the school's first state medal in track since 2007.

In this Enterprise Recorder file photo, recent Selma graduate jumps into the pit during the preliminaries of the long jump event at the 101st annual CIF State Track & Field Championships at Buchanan High School on May 24.