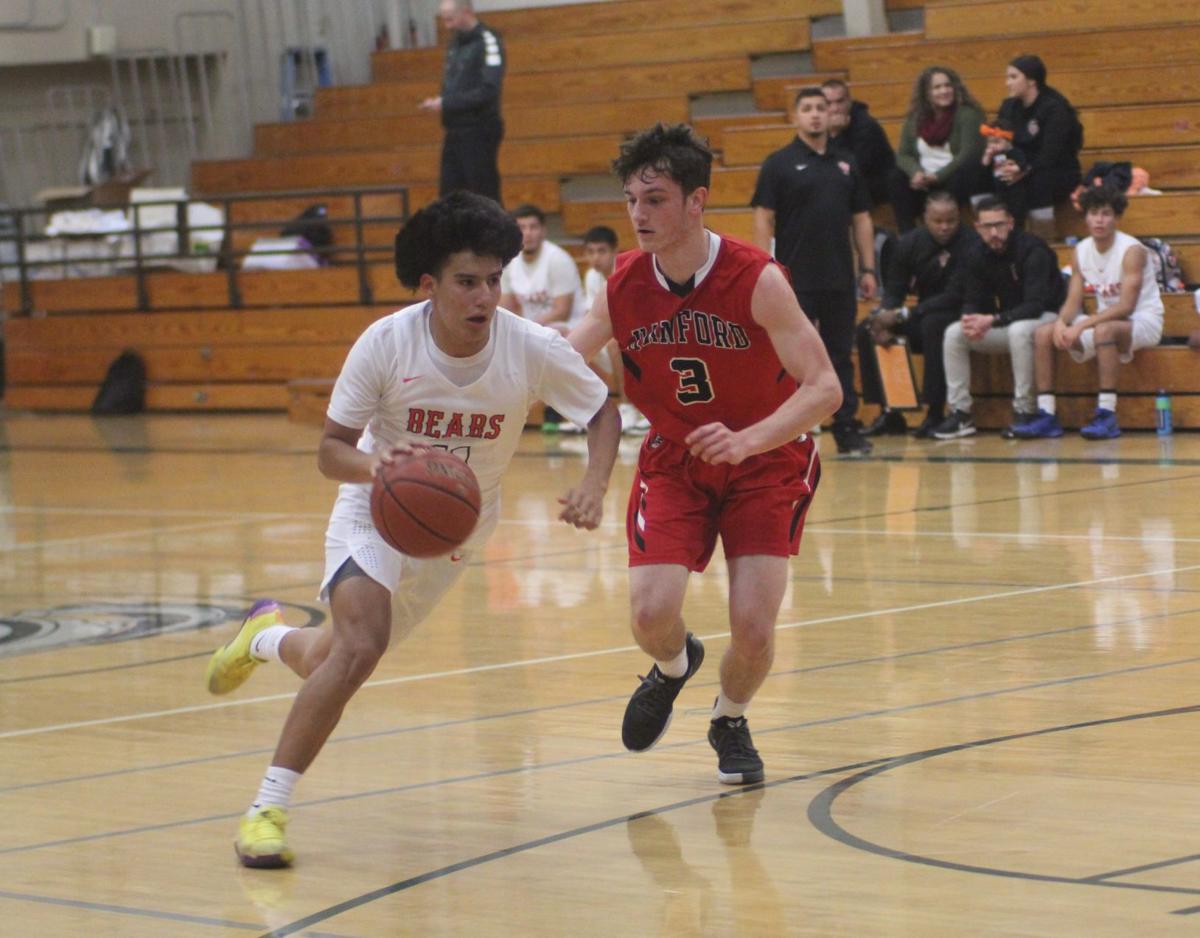 Selma's Joey Ramirez drives to the basket during the second quarter of a tournament game against Hanford at the 5th Annual Andrew Bedoya Holiday Classic at Dinuba High School on Dec. 11. 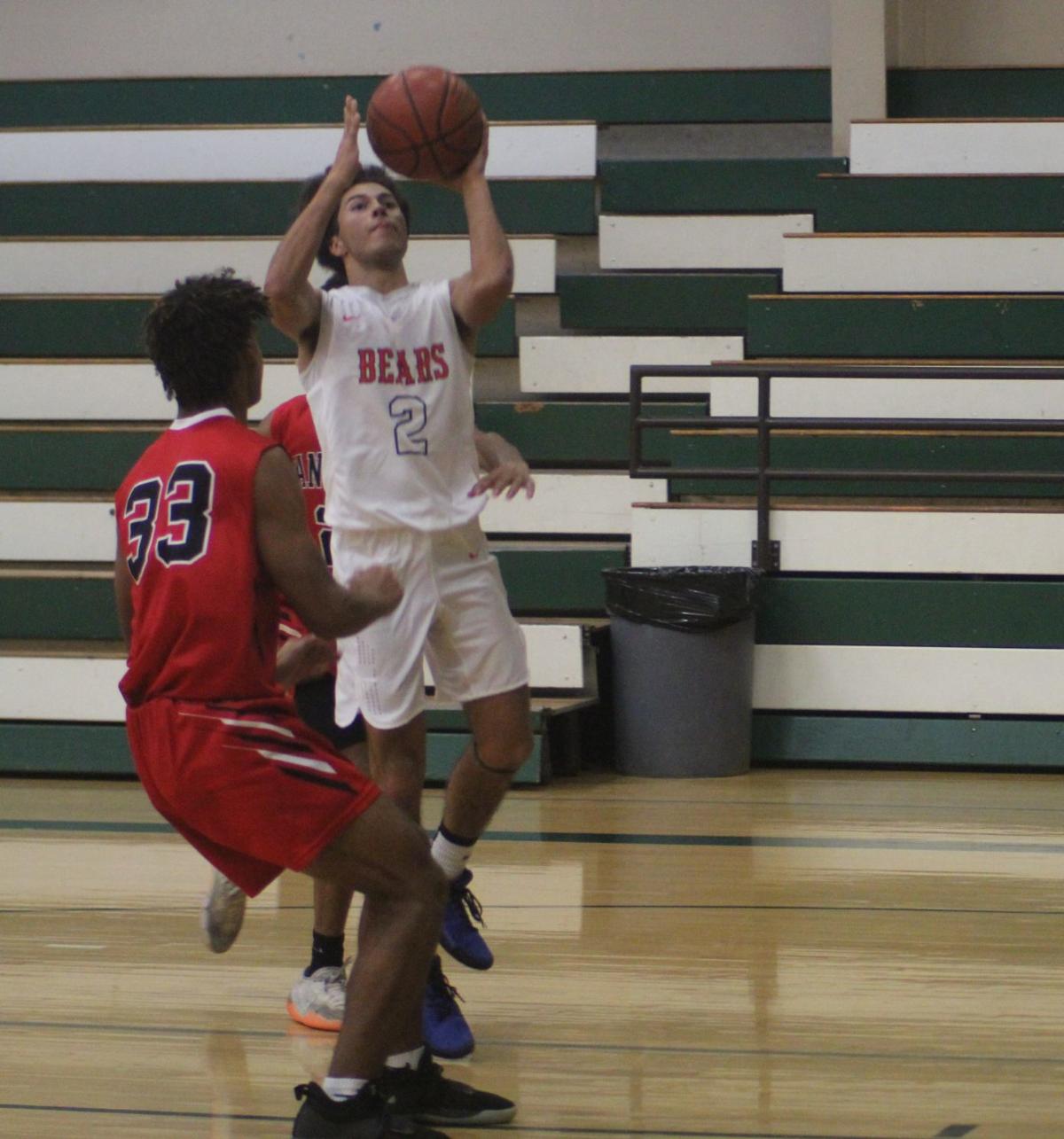 Selma's Aaron Blancas attempts a shot during the fourth quarter of a tournament game against Hanford at the 5th Annual Andrew Bedoya Holiday Classic at Dinuba High School on Dec. 11.

Selma's Joey Ramirez drives to the basket during the second quarter of a tournament game against Hanford at the 5th Annual Andrew Bedoya Holiday Classic at Dinuba High School on Dec. 11.

Selma's Aaron Blancas attempts a shot during the fourth quarter of a tournament game against Hanford at the 5th Annual Andrew Bedoya Holiday Classic at Dinuba High School on Dec. 11.

Selma’s two wins occurred on the final two days of the tournament.

During the first day of action, the Bears took on Hanford in the first round and were put into the consolation round after falling to the Bullpups 60-51. Selma came within three points in the fourth quarter with the score at 52-49, but Hanford closed the game on a 8-2 run to clinch the victory.

In the Bears’ first consolation game the next day, Selma fell to Madera South 64-56 in overtime. The Bears took a 13-point 42-29 lead into the fourth quarter where the Stallions forced an overtime period by outscoring Selma 25-12 in the final eight minutes of regulation. In overtime, Selma was held to two points while Madera South scored 10.

The Bears went on to beat Woodland High, a school near Sacramento, during the tournament’s third day. Selma beat the Wolves 74-49 for the team’s second win of the season.

On the final day of the tourney, the Bears won back-to-back games for the first time this season after earning a 70-50 victory over Orosi. Joey Ramirez led the way with 16 points while Nick Esparza had 12 and Aaron Blancas added nine against the Cardinals.

Prior to competing at the 5th annual tourney, Selma defeated Central Valley Christian 67-63 to begin Central Sequoia League play on Dec. 10. It was the program’s first league win since Feb. 13, 2018. The Bears finished the CSL schedule with a winless 0-12 mark last season.

After a non-league matchup with Liberty-Madera Ranchos on Jan. 2, Selma will continue CSL play on the road against Hanford West on Jan. 3.

REEDLEY - The Kingsburg Vikings stayed perfect after a 95-66 win over Immanuel in a CSL road game on Dec. 10.

Kingsburg (1-0 CSL) improved to 9-0 overall after the win. It was the eighth time this season that the Vikings won by double digits.

Statistics of this game was not available to the Enterprise Recorder.

Kingsburg last played Hanford West in road CSL matchup on Tuesday (after press time). The Vikings will host non-league opponent Reedley (11-1) in a matchup between two of the top teams in Division IV on Friday.

After, Kingsburg will compete at the Polly Wilhelmsen tournament that will start on Dec. 23 and resume on Dec. 26-28. After a non-league matchup with Kerman on Jan. 4, the Vikings will resume CSL play against Dinuba on Jan. 7.

REEDLEY - The Kingsburg girls basketball started CSL play with a 52-32 road victory over Immanuel on Dec. 10.

The win broke a two-game losing streak and it improved the Vikings to 3-4 overall.

Kingsburg last played at home against CSL opponent Hanford West on Tuesday (after press time). The Vikings will compete at a tournament hosted by Orosi and Dinuba high schools that will start today and commence on Saturday. Kingsburg will take on Strathmore in the first round of the tourney today.

After, the Vikings will have a non-league road matchup with Roosevelt High on Jan. 3 before resuming league play on the road against Dinuba on Jan. 7.