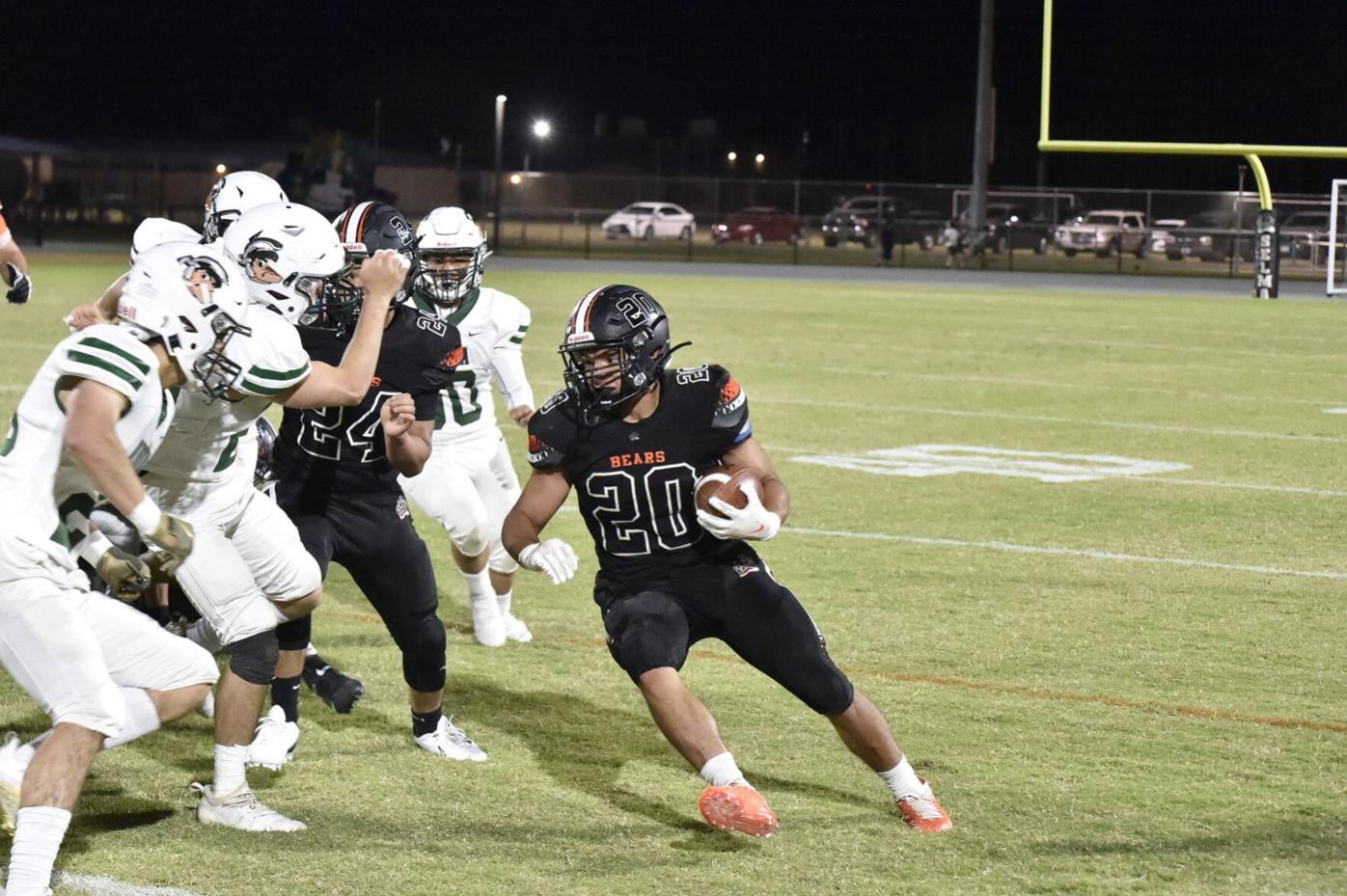 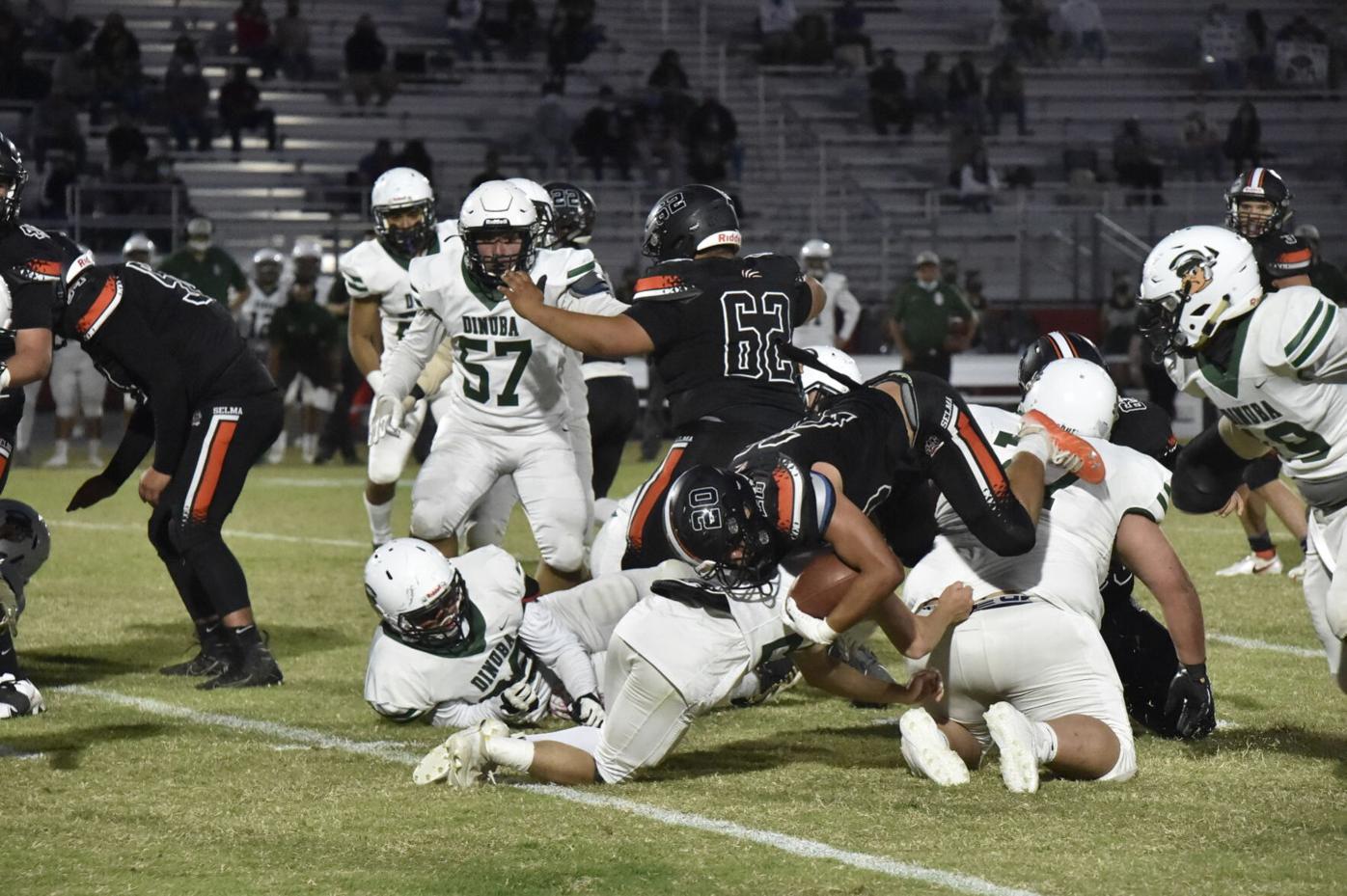 SELMA — There’s no league championship or playoff berth at stake. Just Selma-Kingsburg pride.
Both the Bears and Vikings prepared for the 88th meeting between Kingsburg and Selma in the Kingsburg High School Athletic Bowl with impressive victories last Friday night.
The Vikings lead the overall series by a count of 49-36-2.
The Golden State Boulevard rivals started their series 99 years ago in 1922. Because of the pandemic, this will be the first time they have faced each other in mid-April. And they are scheduled to meet again in early November in Selma.
While Kingsburg came back from a 7-0 halftime deficit with a 16-7 win over Washington Union, Selma put together one of the best halves of football in recent memory with a 50-7 rout over the winless Dinuba Emperors.
This Friday night should be the final high school regular season for 18 Selma High seniors (who were honored before the Dinuba game) and 13 Kingsburg High seniors, who will probably be honored before Friday’s game. It will be the end of the abbreviated season that Kingsburg has allowed only 27 points in posting a 4-0 record against a 2-1 Selma squad that has put 123 points on the scoreboard in three games.
The Kingsburg seniors have led the Vikings to an overall 14-1 record over the past two seasons while the Selma seniors have led the Bears to a combined two-year record of 13-4 and a Central Section Division IV section championship.
The Friday night matchup features a new wrinkle as four Selma student-athletes played five games in Southern California last fall with a Kingsburg-based club football team that faced some of the top student-athletes from the south part of the state.
Against Dinuba, the Bears jumped out to a 15-0 lead before the Emperor fans were comfortable in their Staley Stadium seats. Aaron Blancas returned the opening kickoff 82 yards for a touchdown. Blancas also had an 82-yard kickoff for a score in the win over Kerman.
About two minutes later, Aaron Olivares found the end zone untouched on a 57-yard touchdown run. On the conversion, Blancas had trouble with the snap but picked up the ball and ran it in for two points. Blancas has now scored 50 points in the three-game season on eight touchdowns and a two-point conversion.
Before the first quarter was over, the Bears put together a six-play, 65-yard scoring drive, capped by a 13-yard scoring pass from Joey Ramirez to Blancas.
Selma made it 36-0 at the halftime intermission after a 1-yard plunge by Olivares and a 35-yard scoring pass from Ramirez to Blancas.
The Bears’ final two touchdowns came in the third quarter on a 55-yard pass to tight end Joesiah Flores and a 5-yard run by Aaron Moreno.
Dinuba avoided the shutout by finding the end zone on the second play of the fourth quarter.
The 50 points scored was the second highest output in the series, trailing only the 56 scored by the Bears in 2008. It was the largest margin of victory in the 65 games played in the series.
We asked Coach Matt Logue if Friday night was the best start in quite awhile.
"This year for sure," he said. "We had to clean things up. I just wasn’t pleased, the last couple of weeks with our execution. I think part of that was not being able to practice Monday and Tuesday while we were waiting for our testing results. I really think defensively, we just played a lot cleaner."
The first half stats showed that. The Bears held the Emperors without a first down until early in the fourth quarter and out gained them 283-10 in the first half. Selma finished the contest with a 387-131 advantage in yards gained.
Looking ahead to the Kingsburg game, Logue will have the Bears ready.
“It’s a big game for us," he said. “It’s Kingsburg. It is every year but we don’t have playoffs or anything like that so this is our playoff game, as you would say. We are going to try and prepare as well as we have for anyone. It’s the last game. This is a very special group to me with them winning the championship last year.
“They are obviously a very good football team," said Logue of the Vikings. “They are fast, they are very similar to us. A lot of returning players that are very athletic. A lot of guys that can run and they are well coached. It’s going to be a battle.”