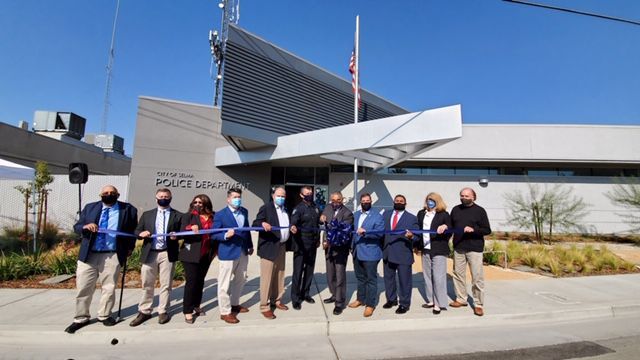 A ribbon cutting for the City of Selma’s new police station was held last week. 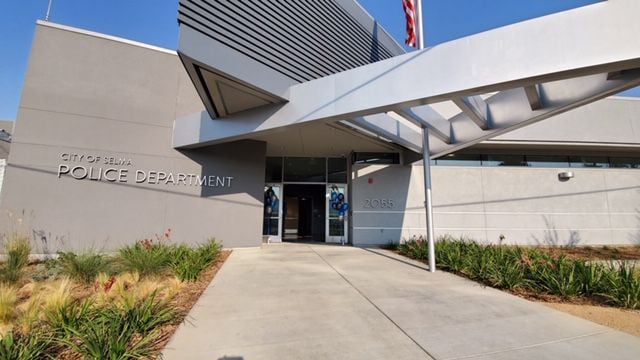 A front view of Selma’s new police station is shown.

SELMA — A building project that was several years in the making is now completed. Selma has a new police headquarters.

City and regional leaders met last Thursday (Oct. 29) for a ribbon cutting at the 10,175 square foot facility next to City Hall.

“This is a fantastic day for the community of Selma,” Mayor Louis Franco said. “This station has been years in the making and I’m proud to be part of this occasion along with all the citizens and community members who worked so hard to make this a reality.”

Police chief Joe Gomez said, “Our new state-of-the-art police station is the crown jewel of law enforcement facilities in the valley, created by the citizens of Selma for the public safety of all. This beautiful police station symbolizes our enduring partnership with the community we serve and community trust.”

The new headquarters replaces the old police station on East Front Street. Funding for the $11,015,582 project came from a $4 million state grant secured by Assemblyman Joaquin Arambula and $4 million in property tax revenue from Measure P in 2016. The City of Selma will fund the remainder of the project.

“The opening of the new Selma Police Department is a milestone for the community, and I’m pleased that I could help secure $4 million in state funds for this long-needed facility,” Arambula said.

“The new headquarters is a modern, larger building that will replace an aging, cramped station. This improvement will greatly enhance the police department’s ability and commitment to protect and respond to the community and ensure public safety.”

Mayor Franco, a candidate for Mayor in this week’s election, praised the completion of the project that went through a contentious process because of its price tag beyond the $8 million in grant and bond funds.

“This station represents the city’s commitment to investing in the quality of life and public safety of our community,” Franco said. “It will provide a state-of-the-art work environment for our Police Department and allow room to grow and put more officers on the street, too.”

Council member and Mayoral candidate Scott Robertson, a vocal critic of using city funds to help pay for the new building, said, “I’m happy for the hard-working men, women and K9 officers of Selma PD to have a new building that will provide the space, safety and equipment they deserve.

“I am distressed for the taxpayer who has to endure a needlessly over-budget infrastructure project not because of necessity but for the gain of special interests.”

SELMA — Trustees of the Selma Unified School District stayed local on Nov. 10 when they selected a search firm to help find a superintendent t…

SELMA — Clay Jacobsen has worked on many television shows, including the Jerry Lewis Telethon and "The Dating Game."

SELMA — As of Friday evening, it looked like Selma would be changing Mayors — and, for the first time in the city’s history, he'll be chosen b…

If you are a teacher, coach or youth pastor, you have seen a lot of young people come through your programs. You try to follow their lives.

A ribbon cutting for the City of Selma’s new police station was held last week.

A front view of Selma’s new police station is shown.
© Copyright 2020 The Sentinel, 300 West 6th Street Hanford, CA | Terms of Use | Privacy Policy
Powered by BLOX Content Management System from TownNews.com.
You don't have any notifications.