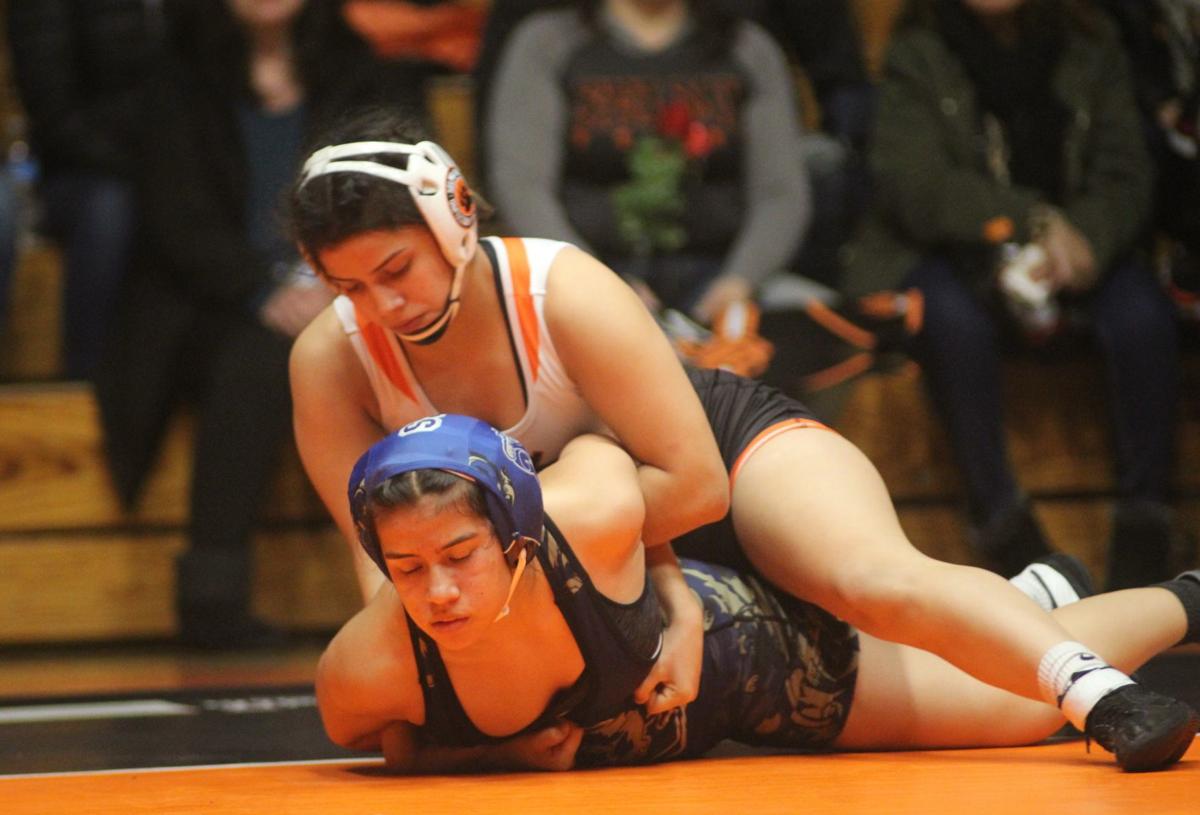 Selma's Melanie Mendoza works a move in the top position during the 128-pound match of a non-league dual against Golden Valley at Selma High School on Wednesday, Jan. 8. The Bears defeated 51-27 in the girls dual. 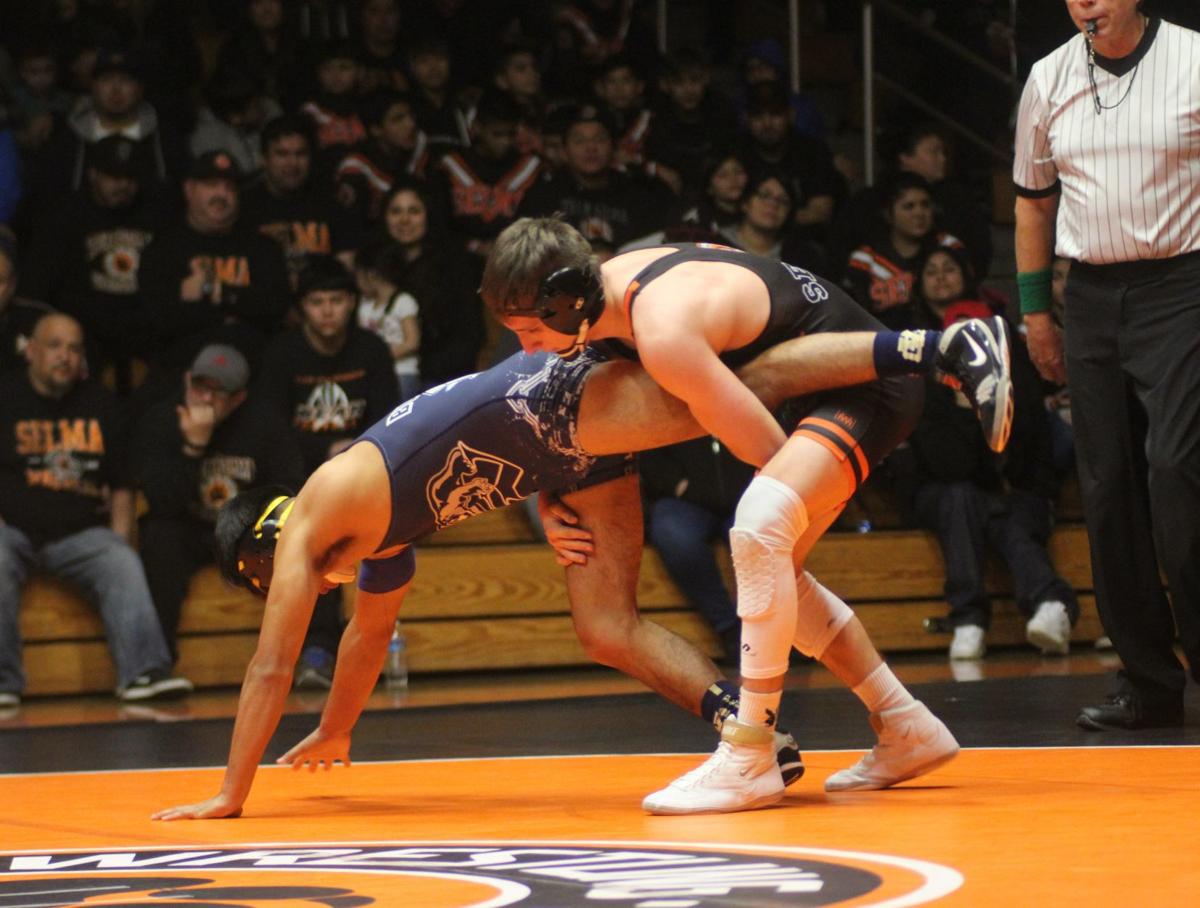 Selma's Devin Murphy takes down Golden Valley's Eved Rueda during the 140-pound match of a non-league dual at Selma High School on Wednesday, Jan. 8. The Bears defeated the Bulldogs 63-18 in the boys dual. 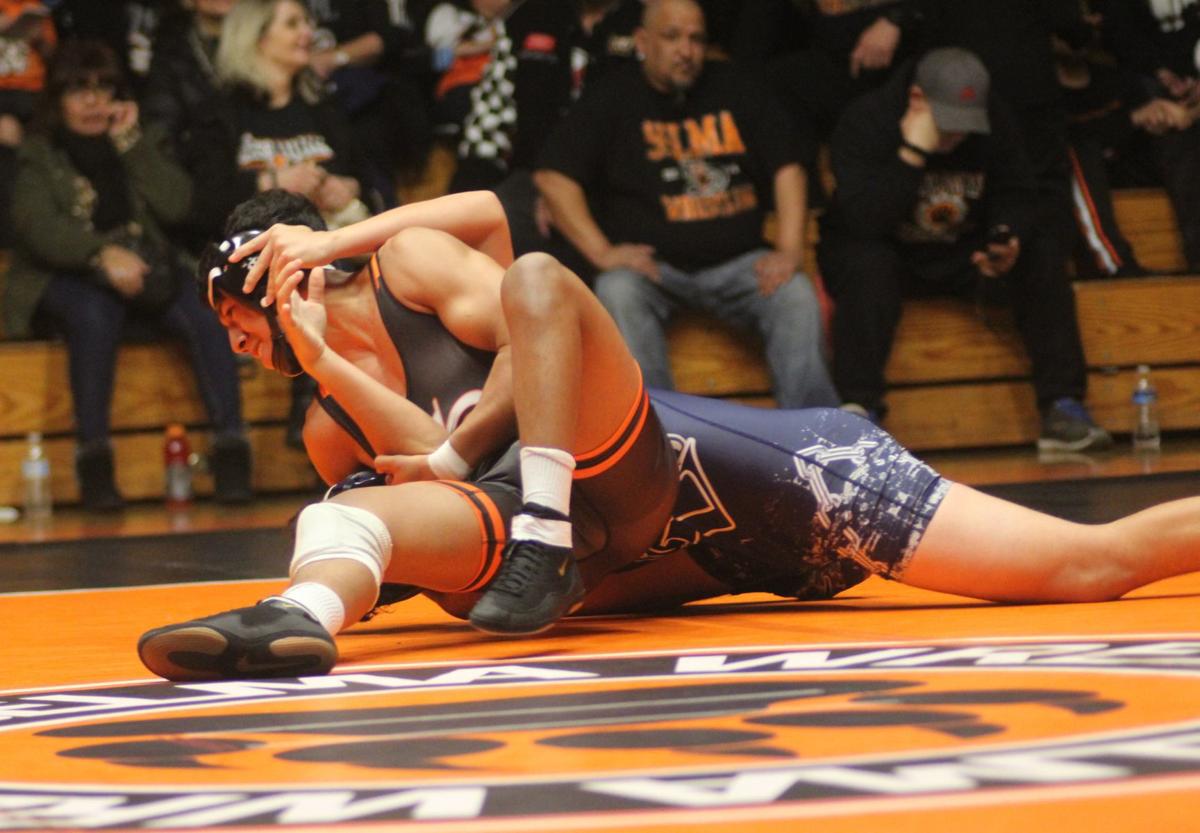 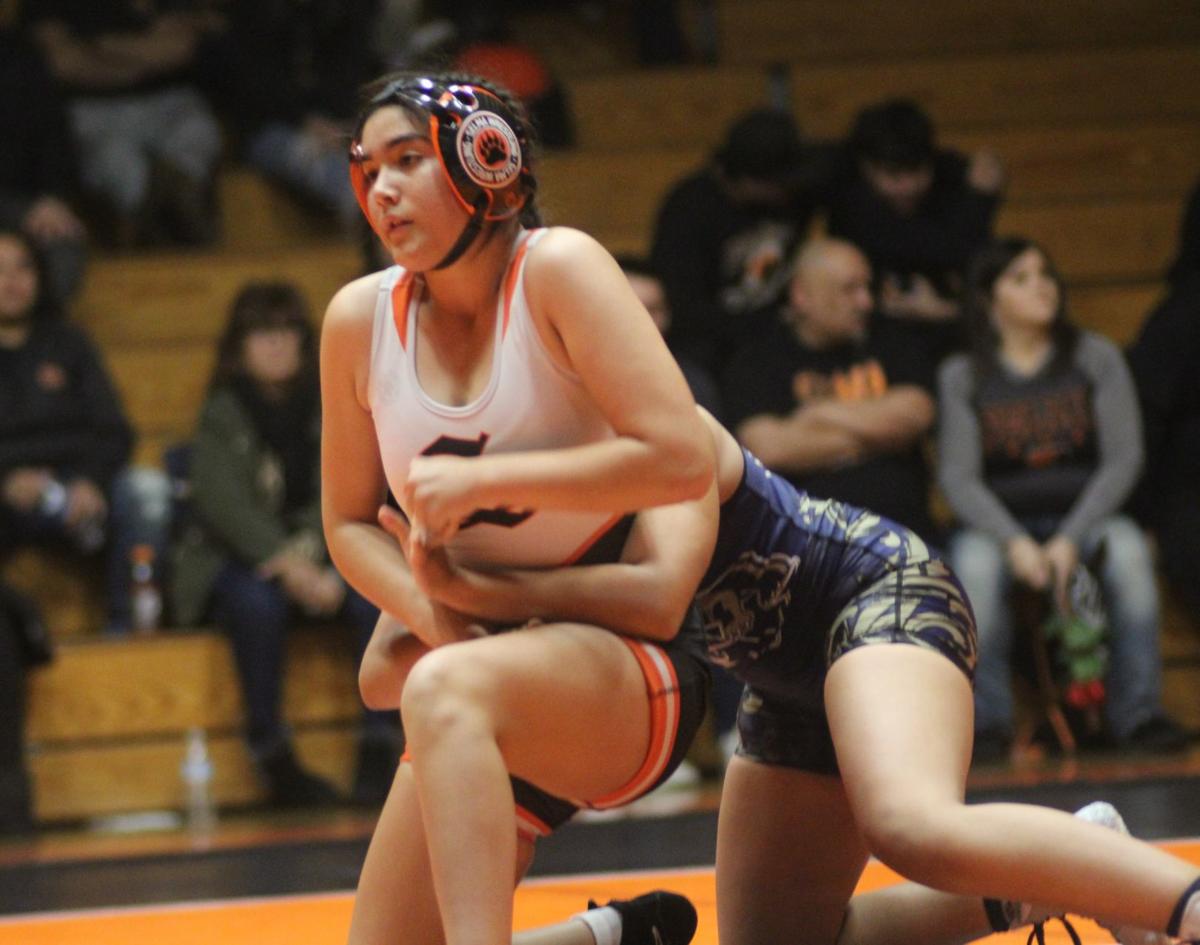 Selma's Brianna Navarro attempts to escape from the bottom position during the 118-pound match of a non-league dual against Golden Valley at Selma High School on Wednesday, Jan. 8.

Selma's Melanie Mendoza works a move in the top position during the 128-pound match of a non-league dual against Golden Valley at Selma High School on Wednesday, Jan. 8. The Bears defeated 51-27 in the girls dual.

Selma's Devin Murphy takes down Golden Valley's Eved Rueda during the 140-pound match of a non-league dual at Selma High School on Wednesday, Jan. 8. The Bears defeated the Bulldogs 63-18 in the boys dual.

Selma's Brianna Navarro attempts to escape from the bottom position during the 118-pound match of a non-league dual against Golden Valley at Selma High School on Wednesday, Jan. 8.

SELMA - The Selma wrestling teams hosted dual matches for the first time this season and both squads put on dominant performances against Golden Valley on Wednesday, Jan. 8.

The boys topped the Bulldogs 63-18 and the girls won 51-27 in the non-league matchups. Senior night ceremonies were also held prior to the junior varsity match, which resulted in a 30-22 victory for Selma.

“This was a night for the girls because last year we wrestled them and we lost by a point,” Bears coach Sam Lopez said. “They might of lost some girls, we lost some girls too, but we got some good girls that came back and ready to compete.”

It was the first of two dual matches that the boys will host this month while it’ll be the only time the girls will wrestle in their home gym this season. The boys will host four-time reigning CIF State champion Buchanan next week.

The Selma High gym is expected to have a packed crowd for the upcoming matchup with Buchanan. Lopez expects that both sides of the bleachers will be full and the gym will have “standing room only” when seating is at capacity.

“It’s going to be wild when Buchanan comes here,” senior Tristan Lujan said. “It’s going to be a fun one. That’s what everyone has been looking forward to. The fans, family, friends, everybody so we’re ready for that.”

The boys started the varsity dual with the 108 pound bout, a match won by Selma’s Nate Gonzalez. The matched ended after Gonzalez pinned Golden Valley’s Hugo Celis with 54 seconds left in the first period. Selma would forfeit the 113 pound match, tying the score 6-6, which would be the only time the Bulldogs came close. All of Golden Valley’s points came on a forfeit.

Selma’s Tyler Sepulveda was also victorious in the 172 match, defeating Rudy Guerrero 7-2. Sepulveda’s win extended the Bears’ lead to 51-6 before forfeiting the 184 and 197 matches. The 222 and 285 matches resulted in a forfeit for Selma.

On the girls side, wrestling at the Selma High gym for the final time was bittersweet for senior Melanie Mendoza.

“I watched my brothers and sisters wrestle here so it’s kind of sad that it’s my last year,” Mendoza said. “Senior year, I’m just going to give it my all.”

Mendoza was victorious in the 128-pound bout, pinning her opponent 43 seconds into the match. Mendoza’s win extended the Bears’ lead to 30-6. Sisters Vanessa and Ireri Mares proceeded Mendoza by claiming back-to-back victories in the 133 and 139 pound matches. Both of the wins stretched Selma’s lead to 39-6 and put the dual match out of reach for Golden Valley.

Vanessa Mares came on top of the 133-pound bout in a 8-6 final in a match she was down 0-2 after two rounds. Ireri Mares would get ahead 5-0 in the first period before winning by pinfall with 17 seconds left in the round.

“I wished some of the girls could have fought a little more, but I’m just glad we came out with a win,” Mendoza said. “We lost to them last year and we just wanted to get a win at our home town.”

Other Lady Bears that were victorious were Brianna Navarro (118 pounds) and Nadine Quijada (123). The only time the Bulldogs had the lead was after the 103 pound match, which ended in a pin. Selma took a 12-6 lead after forfeits in the 108 and 113 pound weight classes.

“Our girls team is tougher than what people think,” Lopez said. “If they all put it together, depending on how many qualify for the state meet, we have a chance of finishing in the top three in the state too. We might even be the state champions. We’ll see what the girls do in the next couple of weeks.”

The girls last competed at the True Wrestler Napa Valley Invitational in Napa on Friday and Saturday. Next for the girls is the Lady Mid-Cal’s at Gilroy High School on Jan. 17-18.

As for the Boys, they last competed at the Five-Counties Invitational in Southern California on Friday and Saturday. The Bears will host Buchanan in the second annual “Battle of the Bears” on Tuesday.

Last year, the Buchanan Bears defeated the Selma Bears 44-14 at Buchanan High School. The junior varsity dual is scheduled for a 5:30 p.m. start while the varsity dual is expected to begin at 7 p.m.

Selma will host the Central Sequoia League Dual Championships a day after taking on Buchanan. The CSL tourney is scheduled to begin at 10 a.m at the Selma High gym.