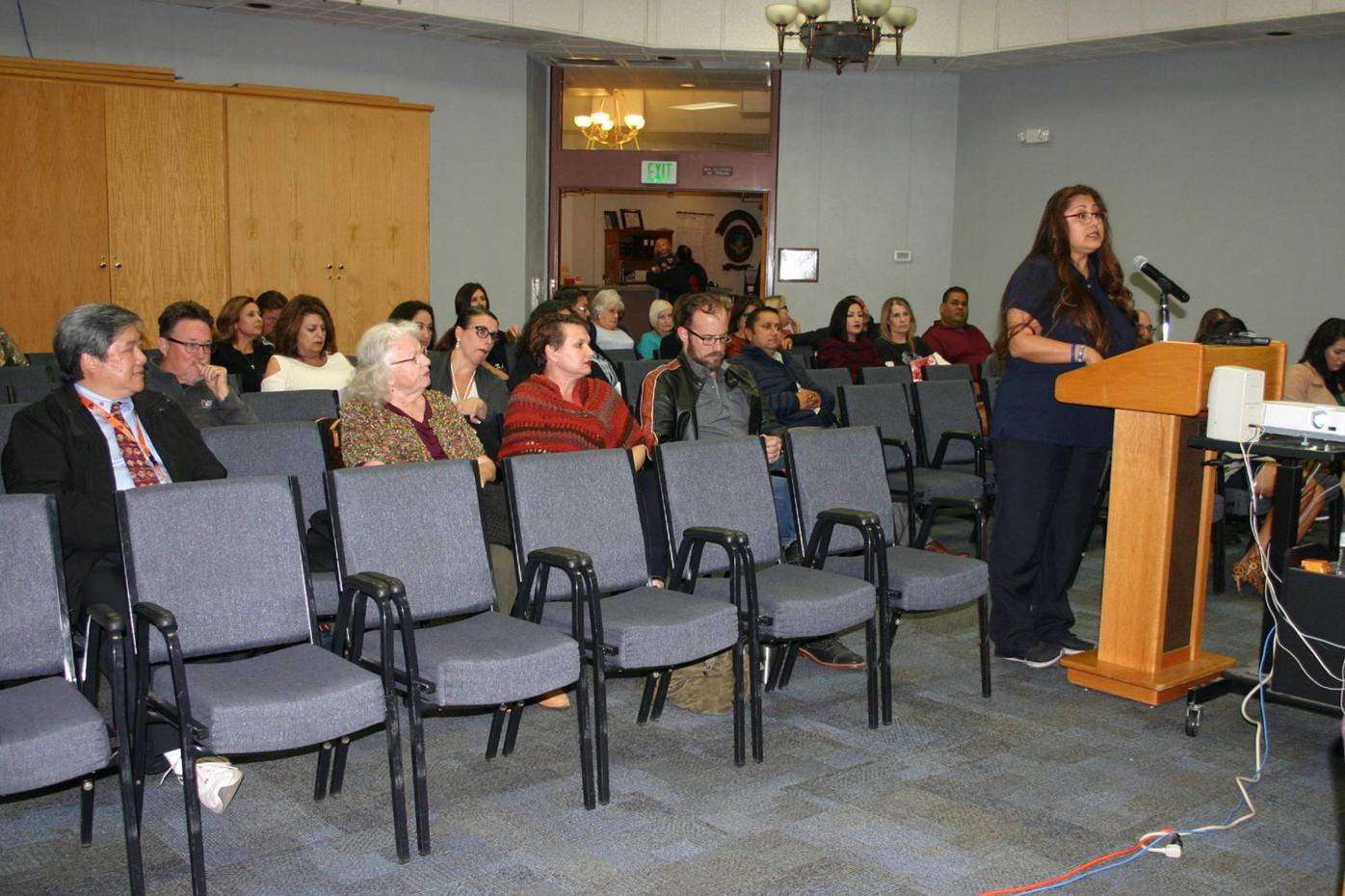 Selma resident Yolanda Torrez was among residents who spoke during the special meeting Nov. 17 called by the Selma City Council to discuss City Manager David Elias. Not only were citizens angered that Elias was hired, they also spoke against having Police Chief Greg Garner serve again as interim city manager. Garner filled the position temporarily after outgoing City Manager Ken Grey stepped down. 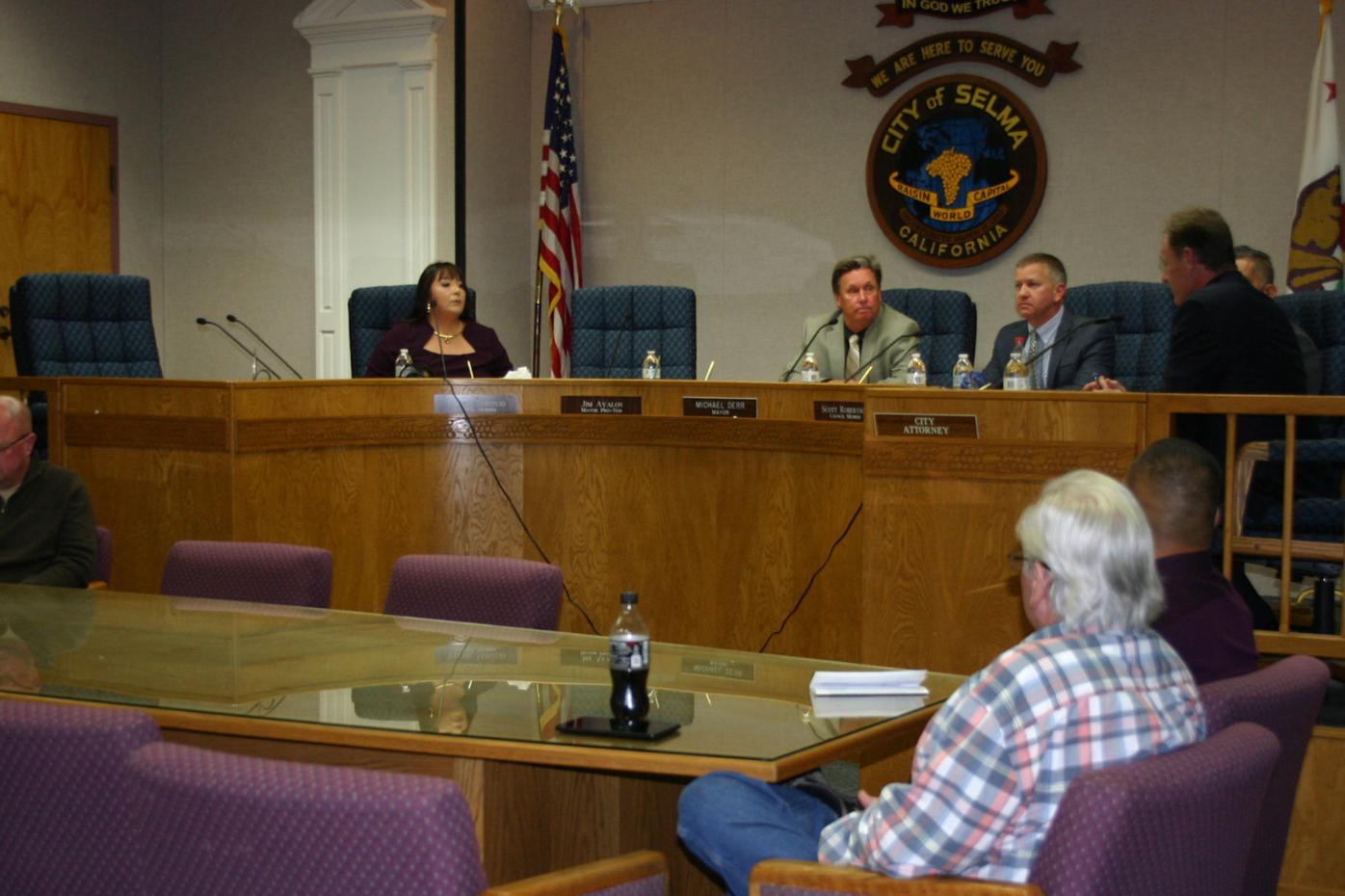 Former City Manager David Elias’ chair sits empty at the dais of the Selma City Council after his resignation was accepted by the Council. Here, City Attorney Neal Costanzo announces the Council's acceptance of Elias' resignation. 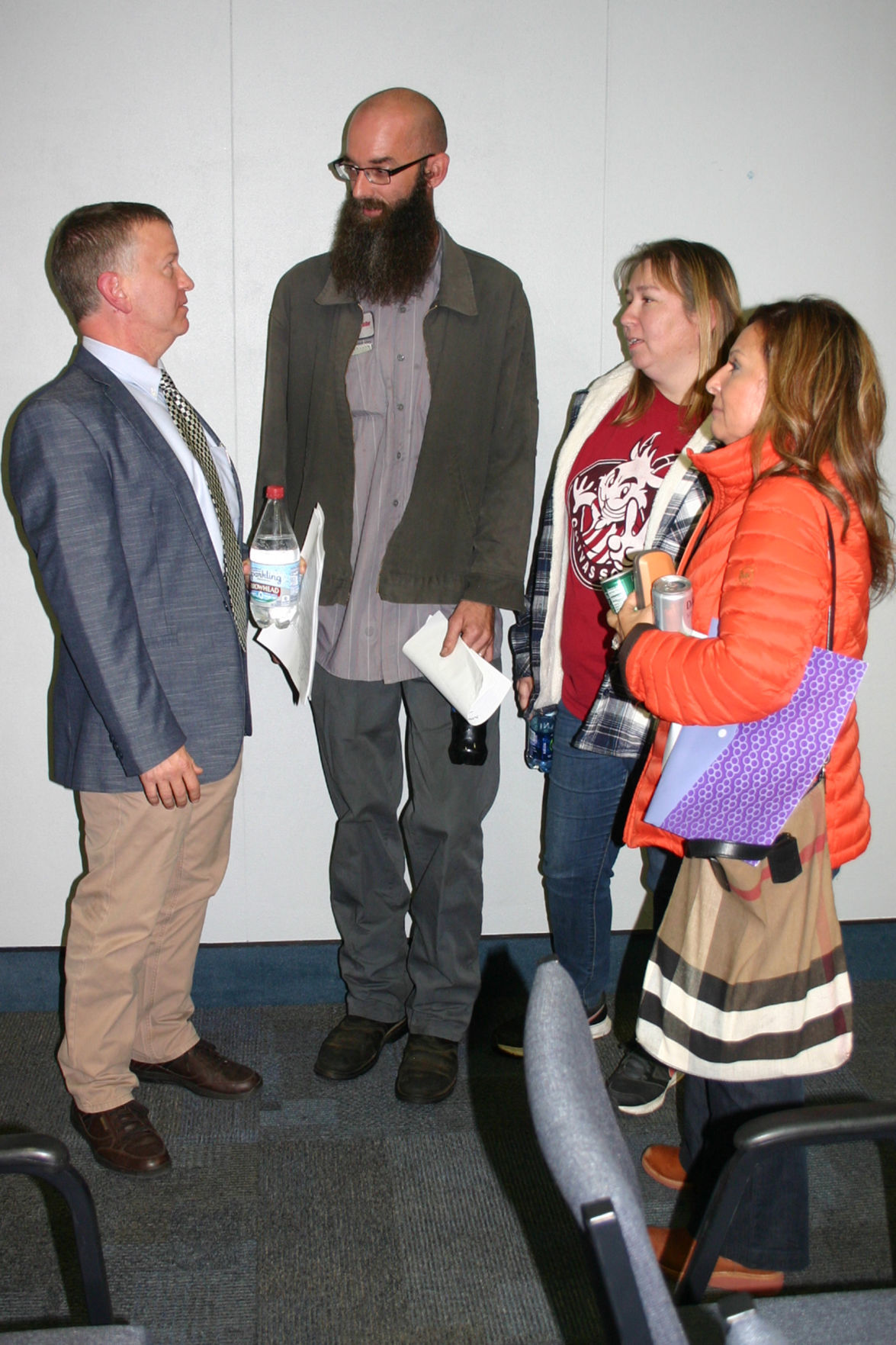 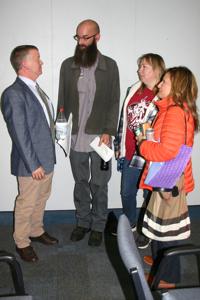 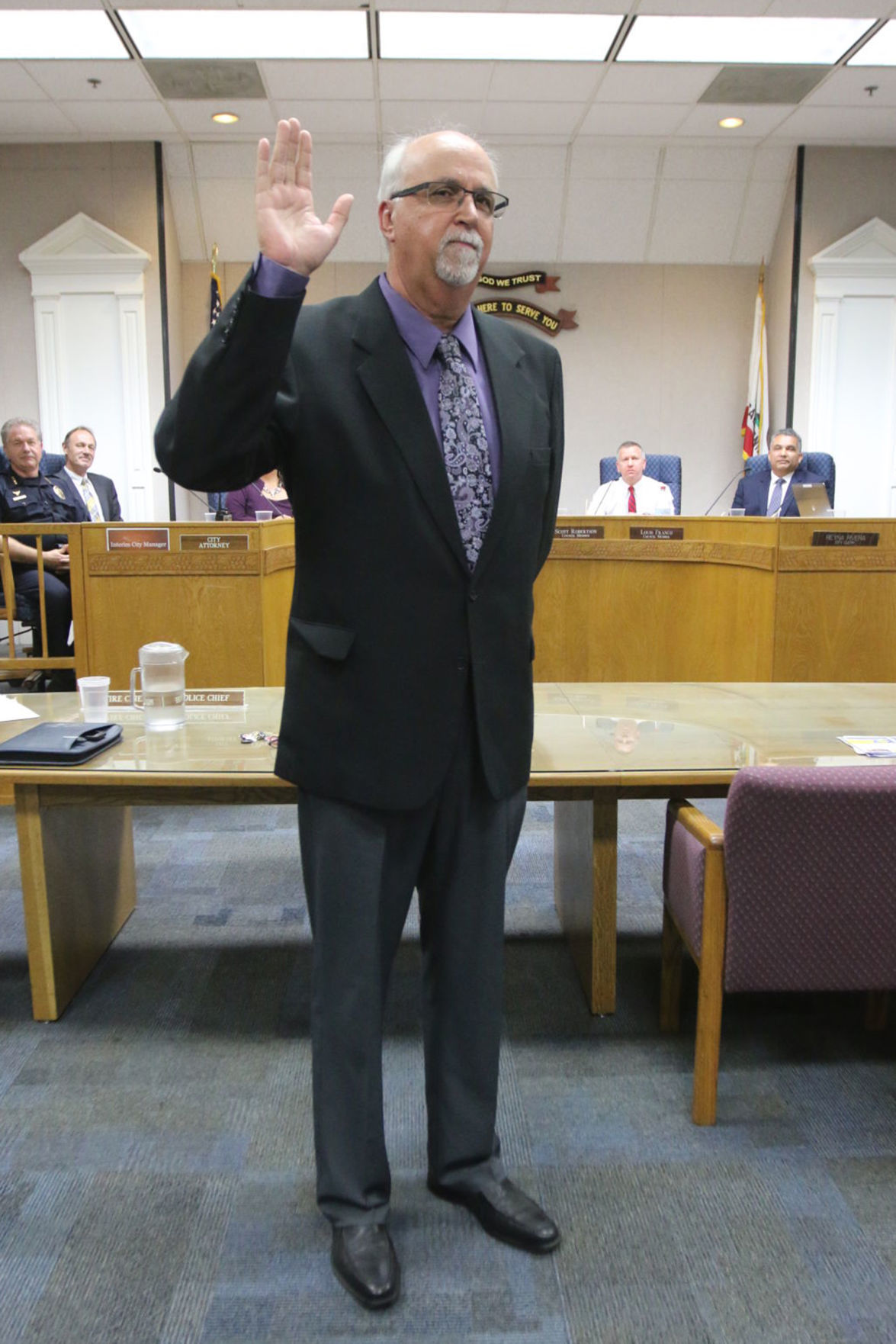 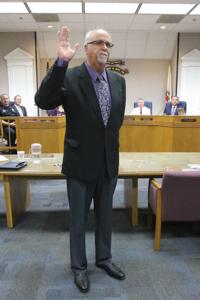 Selma resident Yolanda Torrez was among residents who spoke during the special meeting Nov. 17 called by the Selma City Council to discuss City Manager David Elias. Not only were citizens angered that Elias was hired, they also spoke against having Police Chief Greg Garner serve again as interim city manager. Garner filled the position temporarily after outgoing City Manager Ken Grey stepped down.

Former City Manager David Elias’ chair sits empty at the dais of the Selma City Council after his resignation was accepted by the Council. Here, City Attorney Neal Costanzo announces the Council's acceptance of Elias' resignation.

SELMA – David Elias has resigned as Selma’s city manager amid an embezzlement investigation that, if proven true, could land the former official in state prison for 16 years.

The Selma City Council announced they’d accepted his resignation after a closed session at a special meeting called Nov. 17.

Selma Mayor Mike Derr said he expected to announce who will serve as interim within the next few days.

“We’re just putting in an interim who’ll be holding down the fort,” Derr said. “As soon as we know, I’ll let you know.”

The search for a replacement would start immediately thereafter, he said.

“We’re serious about this. We need to have people in place. We’ve got so many irons in the fire that we need somebody to direct this thing.”

Selma residents spoke briefly before the closed session at the Nov. 17 meeting against the idea of having current Police Chief Greg Garner serve as the interim again. Garner had filled the position temporarily after outgoing City Manager Ken Grey stepped down.

“We have enough going on in the police department right now that needs to be taken care of,” Selma resident Yolanda Torrez said. “We’ve been here for months complaining about the crime, the lack of officers, the lack of protection for our residents and our community. We do not need to take him from his position full time. He needs to focus on his department.”

“I hope they come out and say they’re not putting the chief in there. If they do that, they’re not helping improve the situation,” Jones said after council members went into executive session. “The chief said he could not move everyone down in the office from the lieutenants and detectives. Well, then we can’t move the chief down to city hall. We don’t have enough officers and support as it is.”

As residents wondered what decision would be made, they offered suggestions as to who could serve as interim city manager effectively. While some suggested current City Clerk Reyna Rivera fill in, others said department heads such as Recreation’s Mikhal Kirchner or Fire Chief Mike Kain take on the office as they’ve all served the city for several years.

Once the announcement that someone outside the city would be approached, residents said they were relieved.

“I’m happy that our voices are finally being heard,” Torrez said. “I’m glad at this point because the chief needs to focus on his department and I’m glad that they saw that.”

For whoever is hired as the permanent city manager, Torrez said she hopes their immediate focus is public safety.

“They need to start with that to make our citizens feel safe again and feel we’re being taken care of the way we should. If any department is in bad shape right now, it’s our police department so why would they out of that area again?”

Derr expressed regret that Elias would no longer work for the city.

“One of the things we got with David was someone who hit the ground running. His first day of work, he went to work. Everybody else is going to have a learning curve. All that is going to be something we lost in the process.”

Elias was arrested Nov. 13 by the District Attorney’s Office Bureau of Investigations and charged with 13 counts of misappropriating public monies by a public officer

The charges stem from when Elias worked as Fowler’s city manager in 2015 and 2016. Allegedly, he used Fowler’s credit cards for personal use to make more than 100 purchases that were not for legitimate city business.

If convicted, Elias faces up to 16 years in state prison.

Elias was hired to serve as Selma’s city manager in April. At the time, Councilman Louis Franco expressed doubts about hiring Elias and voted against the decision. The rest of the Selma City Council voted in favor of hiring Elias touting his experience and track record.

Franco declined to go into details at the time but said he had concerns over the circumstances in which Elias left his employment with Fowler.

“Until those concerns are fully resolved, I personally think we should continue to look,” Franco said at that April meeting.

Elias said in a July interview that he was unaware of the investigation until earlier that month. He called the purchases detailed in the DA’s legal documents as an oversight.

“I did, however, make an inadvertent purchase, as reported, for personal reasons which was an oversight on my part,” he said. Elias said the purchases had not been brought to his attention prior to this “with the attempt to allow me to correct it.”

Derr decline to comment after Elias’ arrest on Nov. 13.

“Because this is a personnel issue, it’s probably best if I don’t comment on it at this time,” he said in email Thursday, Nov. 16.

Earlier when Elias was hired in April this year, Derr said council was aware issues had not been settled in Fowler.

“The council was aware of the charges while we were in the hiring process,” Derr said.

The search warrant showed that since June 2014 Elias was receiving a monthly vehicle allowance stipend of $600. The arrangement provided that Elias would be “solely responsible for all expenses to use, maintain, operate and insure [his] vehicle.” Since Elias received the vehicle allowance, the document states “there is no justified reason to use a City of Fowler gas credit card for personal use in the City of Hanford.”

Varela added that “from [my] experience and training in fraud investigations, [I have] knowledge that individuals who commit fraud do so on multiple accounts to which they have access.”

The next regularly scheduled Selma City Council for Nov. 20 is cancelled. The next meeting will be 6 p.m. on Monday, Dec. 4, 2017 at Council Hall Chambers, 1710 Tucker St.