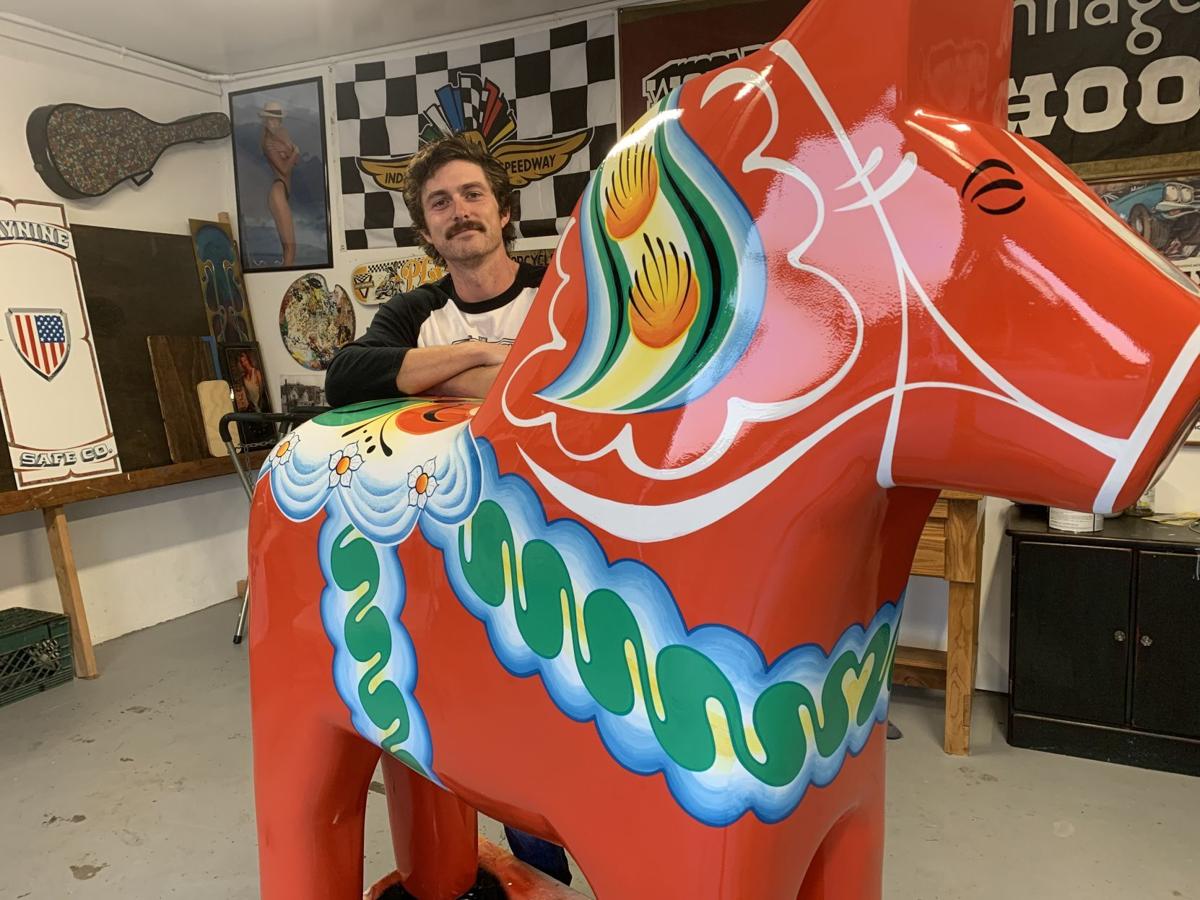 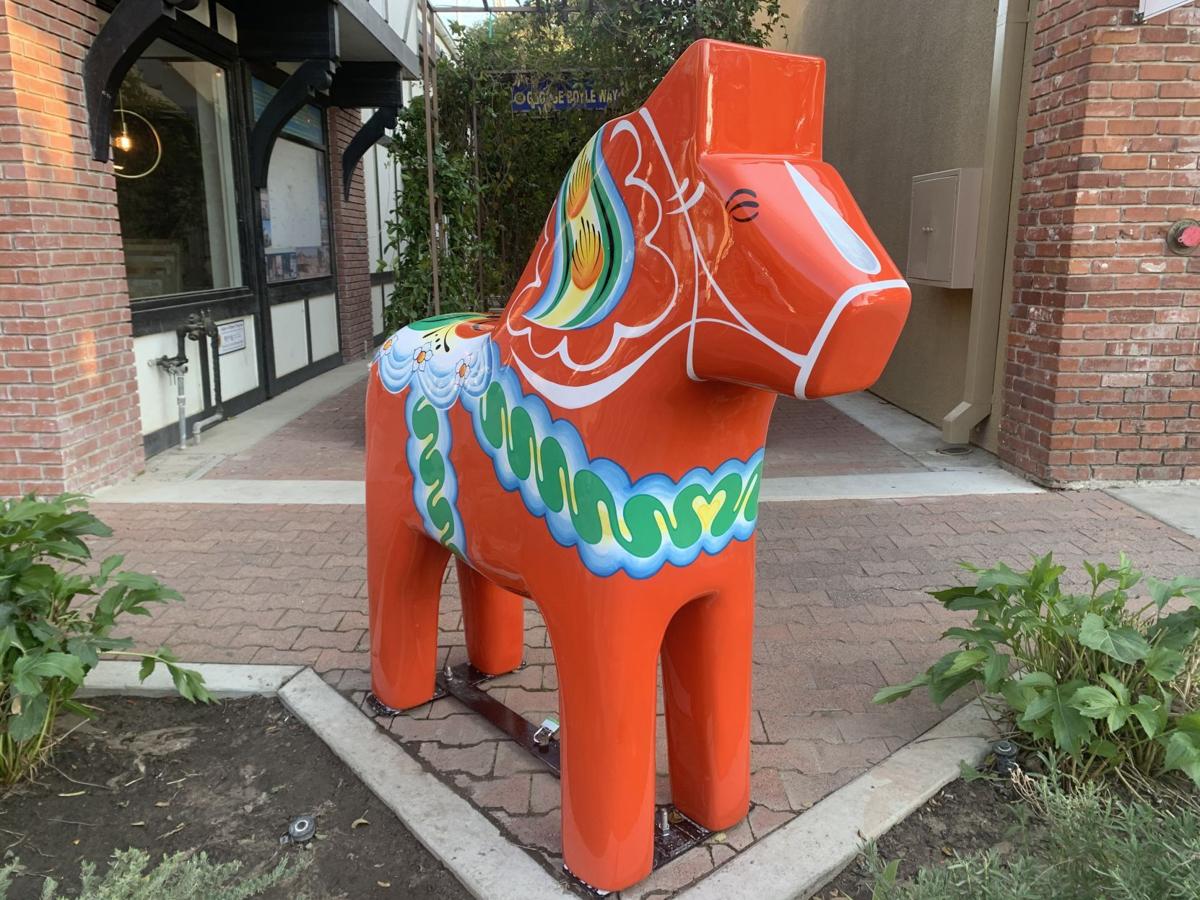 The Dala Horse in downtown Kingsburg has been restored. 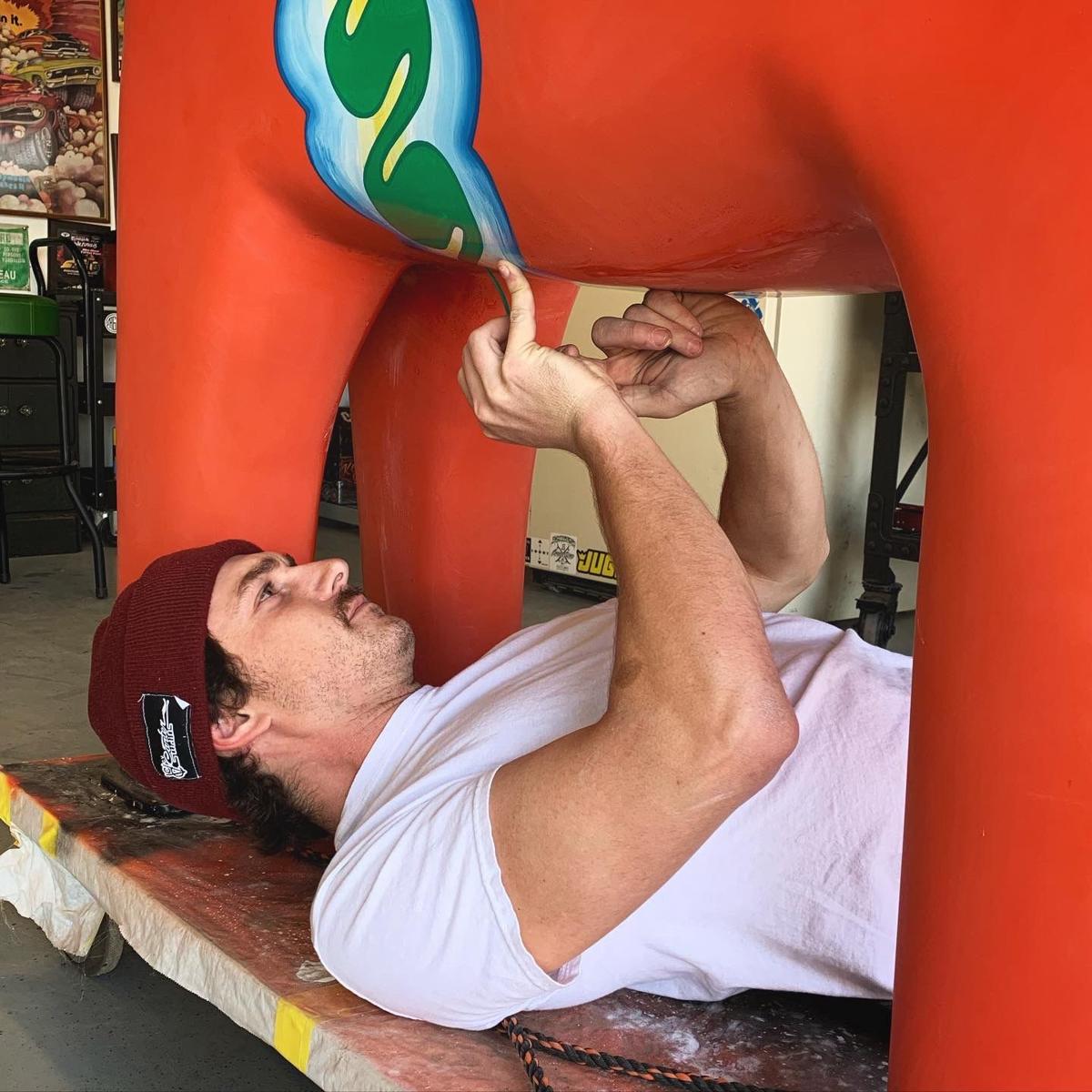 KINGSBURG — Kingsburg’s iconic mascot is a horse of a different color.

After years of sunshine beating down on it, the town’s Dala Horse – a downtown landmark – is getting a makeover.

“That’s the thing in Kingsburg. I think everyone, at one point, has hopped up on that thing and sat on it to take a picture. I think it’s great that from here on out, it will be my artwork that they’re sitting on. It’s an honor to be trusted with such an important project,” Chad Carter said. “That’s a little piece of me that will stay with this town for years to come.”

Carter, a Kingburg native who currently lives and works out of Fowler, was chosen to restore the horse after years wear from sun, win and impromptu photo shoots.

Dala, or Dalecarlian, horses are traditional carved wood horses that originated in the Swedish province of Dalarna in the 1600s. Originally intended as children’s toys, and later as bartering chips, the horses became a symbol for the Dalarna region, and Sweden as a whole following a popularity surge stemming from the World Expo in Paris in 1937 and the World’s Fair in New York in 1939.

“At the World’s Fair, in front of the Sweden Pavilion, there was a big six-foot wooden Dala Horse, and from that point on, it became known as the national symbol for Sweden,” said June Hess, owner of Svensk Butik, a shop in Kingsburg that specializes in Swedish items.

President Ronald Regan declared the year 1988 as “New Sweden ‘88” in celebration of the 350th anniversary of the first Swedish colony in the Americas. This sparked a year-long celebration in Kingsburg – which was dubbed a “Jubilee City” – during which Hess’ brother, Wayne Olsen, carved the iconic Kingsburg Dala horse that still looms ever-popular in the city today.

“There were a lot of people in town whose families were originally from the Dalarna region of Sweden, so we thought it would be an appropriate logo for our town,” Hess, whose family hails from that region, said.

Carter, whose art can be found on Instagram: @ChadCarterArt, said he wanted to keep the history and tradition of the Dala horse alive in the restoration, but also added a little of himself to the project.

“It was interesting with this particular project because it’s such a traditional folk-type piece that it’s hard to have full artistic freedom, but I think every artist finds little ways to tweak things and make it their own. I was able to do that with this project and that made it a lot of fun,” Carter said.

The process took about five months of work, off-and-on, and the fully restored horse is now back downtown, in the 1400 block of Draper St.

SELMA  — The Selma community has rallied to give 100-year-old Dorothy Stephens a very special birthday.

SELMA — For the second time in three years, the contract of longtime Selma City Attorney Neal Costanzo has been terminated.

So there I was, working a crossword puzzle while standing in a long line of other old folks. And if you think I was bored, what about the old …

Raisin Capital of the World: Selma organizations closed out 2020 productively

Well, it has been a few weeks since we connected. Happy New Year 2021!

Trustees discuss what is needed from new superintendent

SELMA — What qualities do trustees of the Selma Unified School District want in their new superintendent?

KINGSBURG — Thanks to updated guidelines from the California Department of Health, some questions are answered and some remain when it comes t…

SUSD board of trustees hosts meeting via Zoom

SELMA — Via Zoom, the 2020 reorganizational meeting of the Selma Unified School District board of trustees was held in at least six different …

The Dala Horse in downtown Kingsburg has been restored.