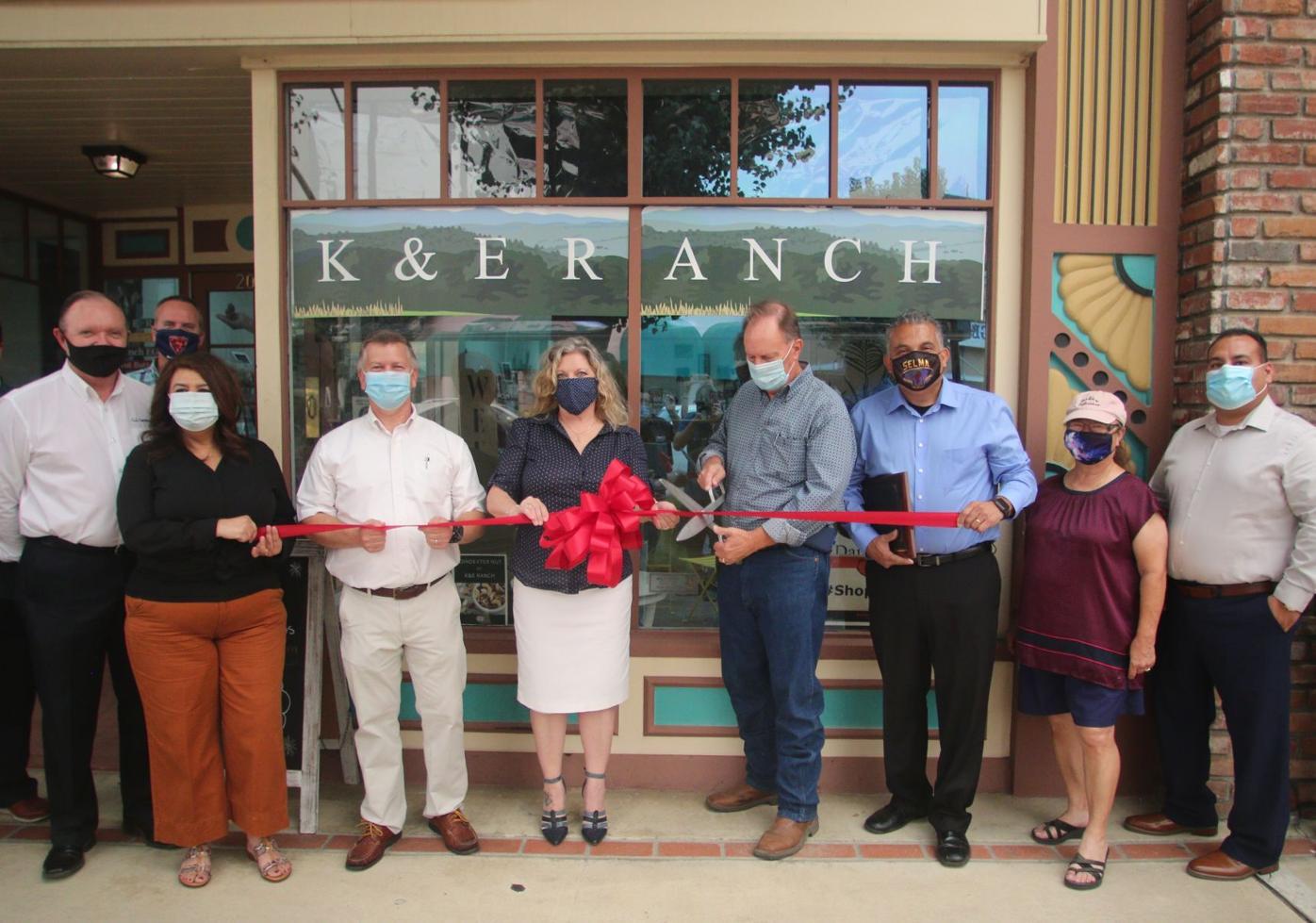 K&E Ranch held its ribbon-cutting ceremony in front of its Downtown Selma location on Second Street on Wednesday, Sept. 9. 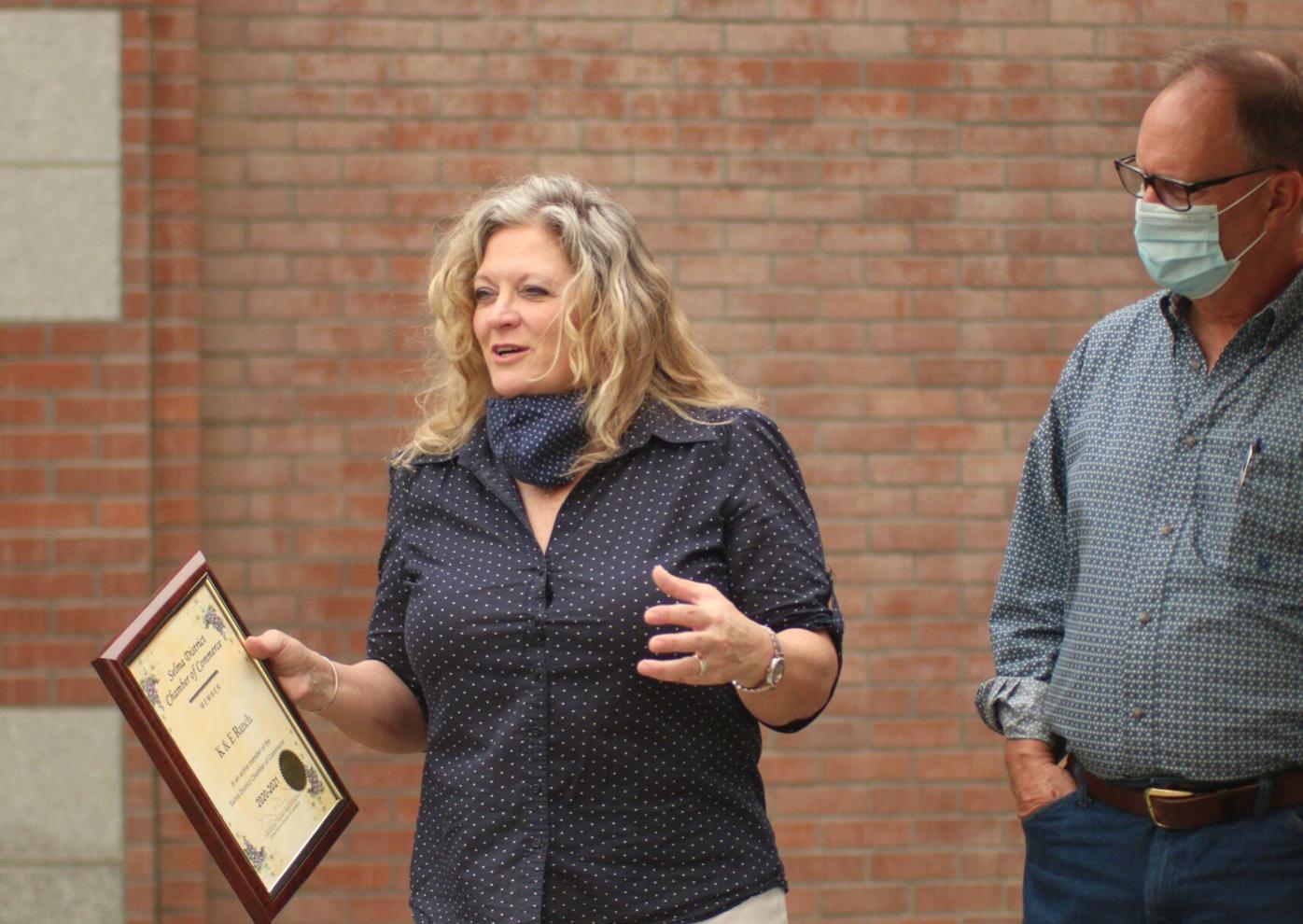 K&E Ranch co-owner Kim Skidmore speaks before the store has its ribbon-cutting ceremony on Wednesday, Sept. 9. 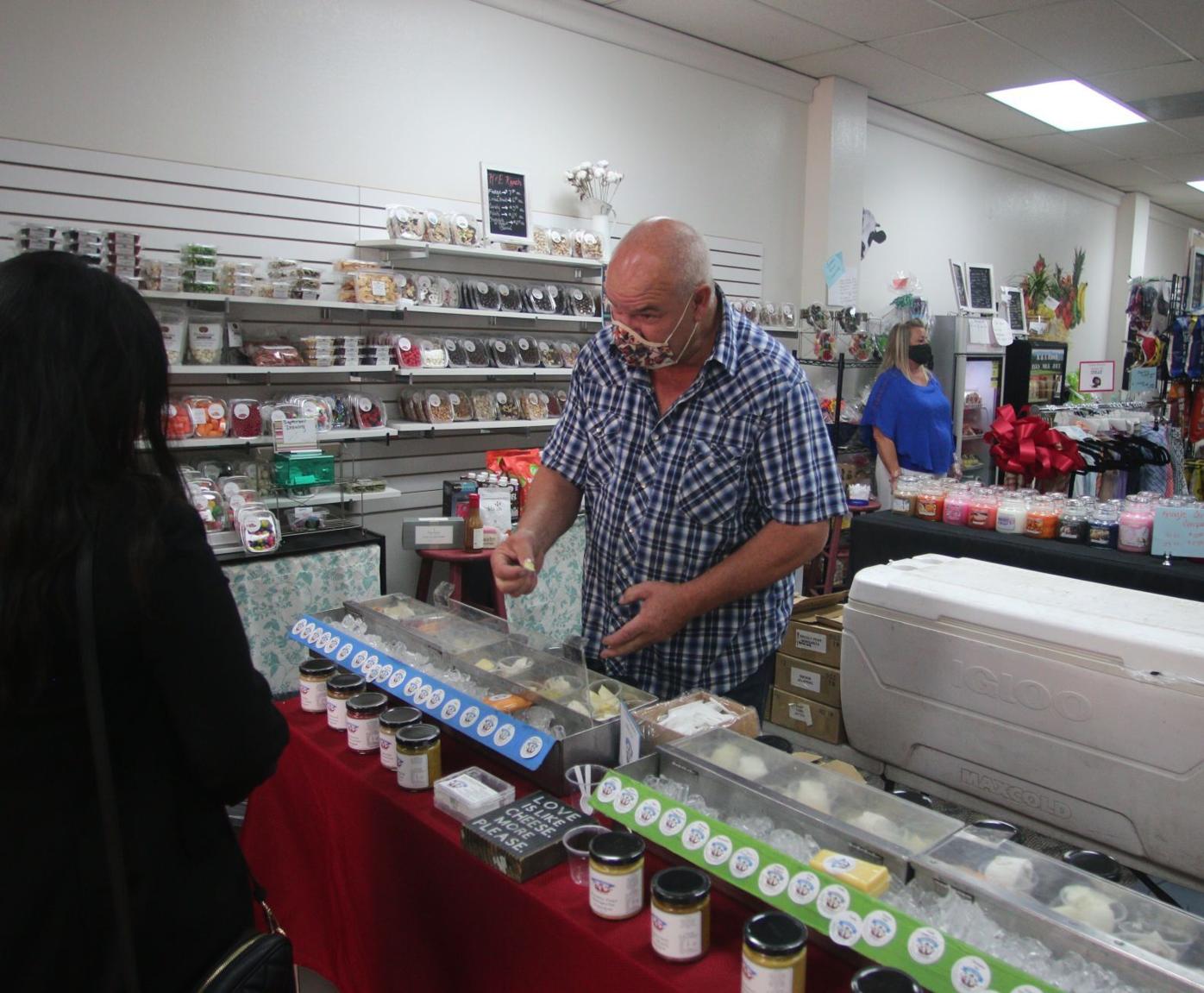 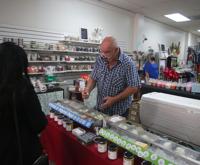 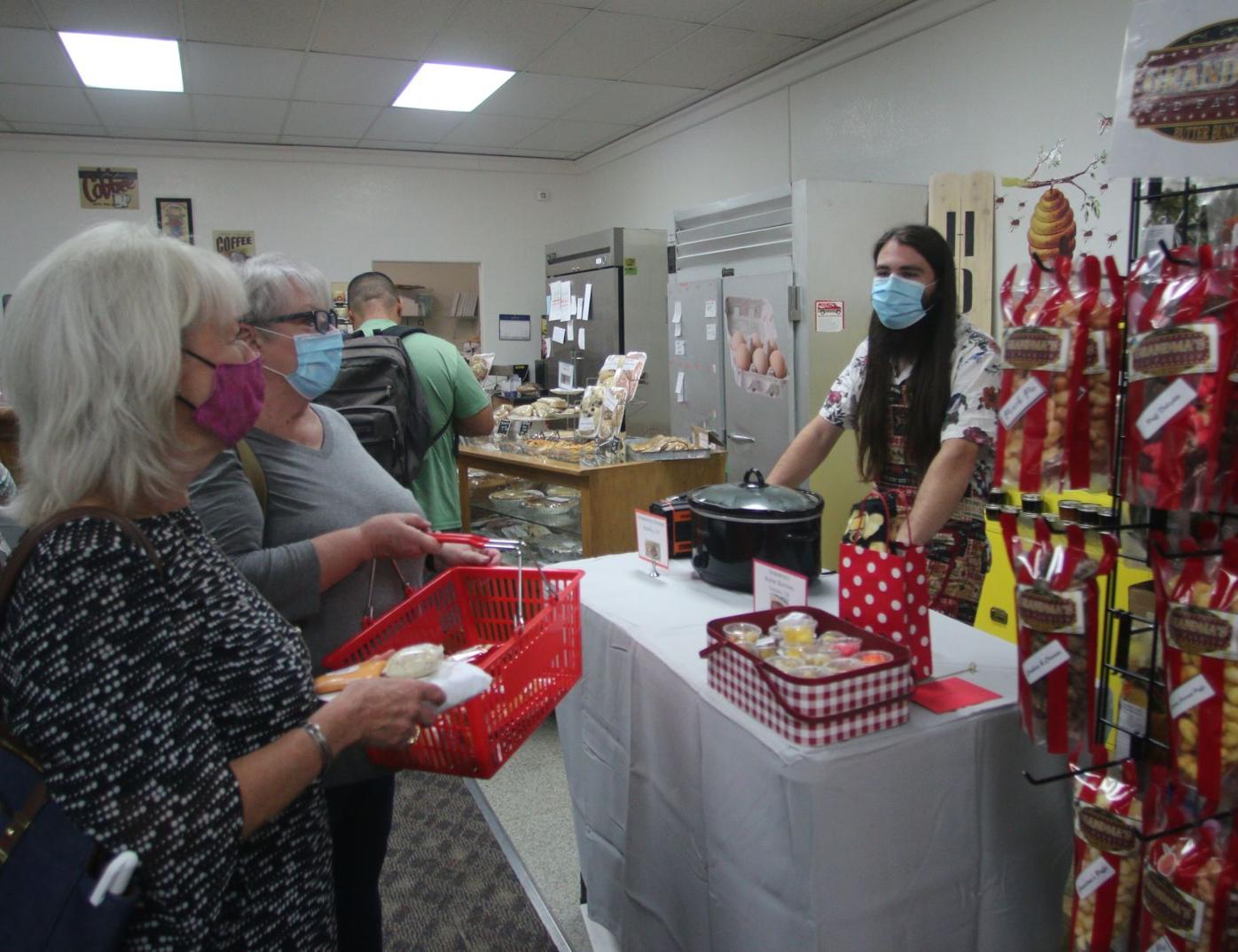 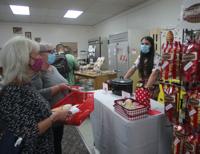 Cody Schapansky of Schapansky German Sausage talks to a few customers at K&E Ranch in Downtown Selma on Wednesday, Sept. 9. 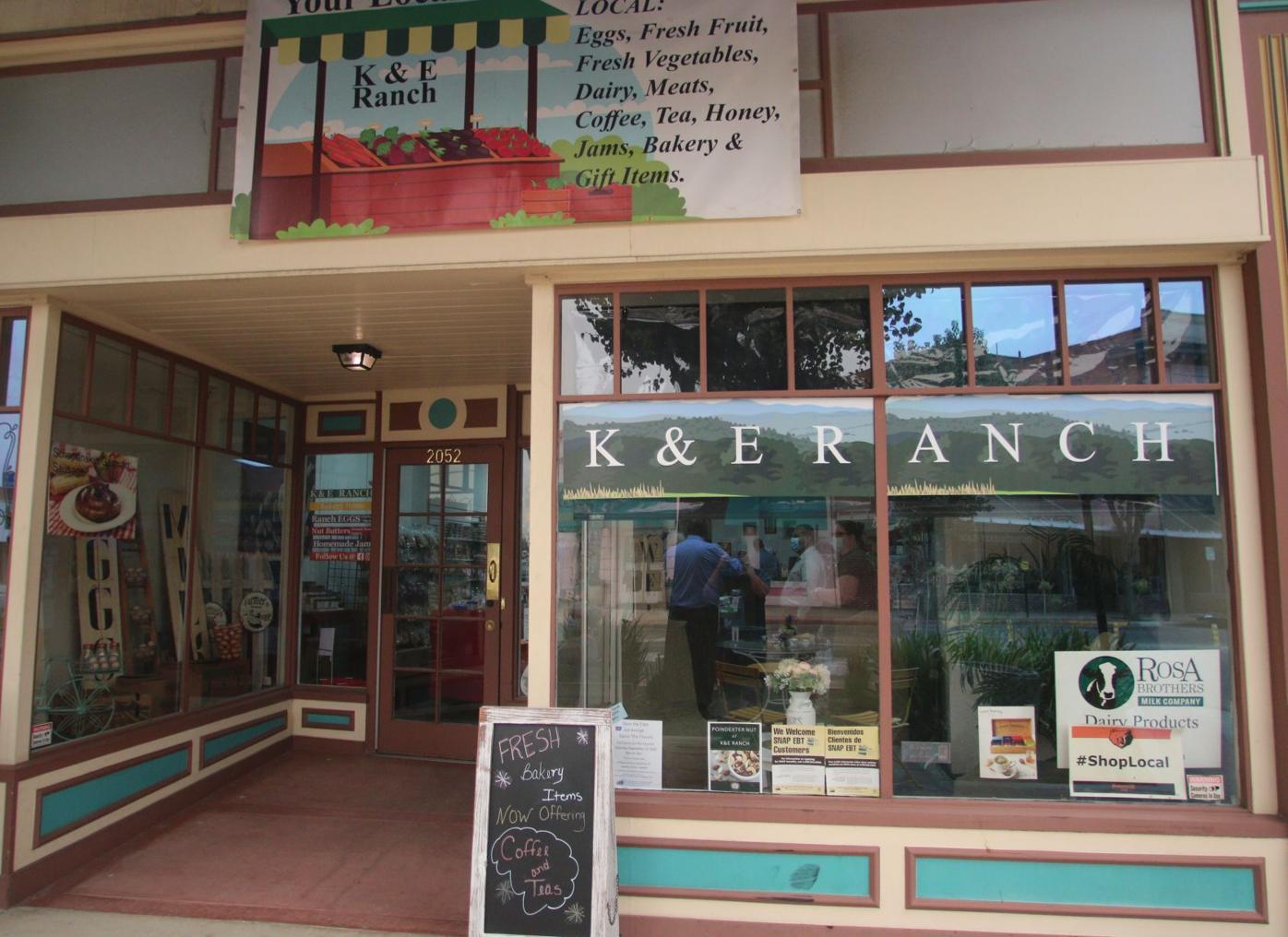 K&E Ranch is located at 2052 Second Street in Downtown Selma.

K&E Ranch held its ribbon-cutting ceremony in front of its Downtown Selma location on Second Street on Wednesday, Sept. 9.

K&E Ranch co-owner Kim Skidmore speaks before the store has its ribbon-cutting ceremony on Wednesday, Sept. 9.

Cody Schapansky of Schapansky German Sausage talks to a few customers at K&E Ranch in Downtown Selma on Wednesday, Sept. 9.

K&E Ranch is located at 2052 Second Street in Downtown Selma.

Once the ribbon was cut, vendors gave free samples inside the store and items offered included independently made products such as eggs, bread, milk, salsa, sausage, cheese and nut butters. K&E Ranch owners Kim and Erik Skidmore asked each vendor to sell their products at their store after crossing paths at various farmers markets throughout the Central Valley. The Skidmores would sell eggs and bread at those same farmers markets before opening their store.

“A lot of these people are people that were at the farmers markets with us,” Kim Skidmore said. “A lot of us were like ‘Where do we go now?’ and some people are just festival people. They go and do the big events and all events are closed. I just went and reached out to them and said ‘Hey I have a place, we want to put some stuff in our store.’”

When Erik Skidmore cut the ribbon, he said it was a “good” feeling, but he added that opening a store was an “unintended consequence” during an unprecedented year.

“We initially did not plan on opening a store here and our initial plan was to have some place to store all the regular supplies and have a packing facility that would meet with health standards,” Erik said. “The property owners wanted some retail presence. So it was a secondary thing.”

One of the vendors, Dino Garcia of GarlicVille’s Best, sold his products at fairs and festivals before the COVID-19 pandemic occurred. Garcia’s main product is an all-natural garlic habanero salsa and sampled his mild, medium and hot flavors at the store. He started his business around late February and early March before California shut down. His product is made in a local commercial kitchen in Fresno, but his company is based in Gilroy, where he was born and raised.

Garcia met Kim and Erik at a farmers market in Fresno where they asked him to sell his product at their store.

“I came in and took a look at the business and said ‘Wow, this place is great,’” Garcia said. “They have local products, independent vendors like myself and this place has a lot of business. People come in and buy and that’s the beautiful thing about small independent markets. Everybody supports each other and things are going good.”

Schapansky German Sausage was another company that had connections to the Skidmores. They sell seven different types of sausage in the store: breakfast, spicy breakfast, German, Italian, jalapeno cheddar, raisin and low salt, which were all sampled after the ribbon cutting. Their business got affected by the virus, as restaurants in Fresno that would buy their product closed due to the pandemic.

“We do farmers markets with Kim so that’s how we met her,” Cody Schapansky said. “She started asking us, put some sausage in the store when she got this place going.”

Shirely Nellon of Grandma’s Old Fashioned Butter Bunches is a vendor that was trying to get her product into stores, especially for her customers nearby Fresno.

“I have a lot of customers from Visalia and Selma that come to Fresno to buy it so this was a nice little place for it to be a central spot,” Nellon said. “It made it really convenient for the people that live in Visalia that they don’t have to come all the way to Fresno.”

Local business Poindexter Nut Company was affected by the pandemic, as it’s country store on Floral Avenue has been closed due to the pandemic.

“We really couldn’t open it up to the local residents and we saw Kim put in K&E and we thought ‘This could be a good solution,’” Poindexter Nut Company sales manager Amy Hochderffer said. “A place where she’s able to bring in people with all of the COVID restrictions and sell people our products. It’s been just a hit for us.”

Kim and Erick opened their store around the same time some local businesses had to close due to the California's shelter-in-place order in March.

Their primary business of selling eggs and bread kept their income steady during the pandemic. One of their store’s popular items is Rosa Brothers milk, which has been in demand from local residents after Save Mart in Selma closed in Oct. 2019.

“I think the reason is that we’re able to keep it going was that we still had all the essentials that a lot of stores were running out of,” Erik said. “Milk, eggs and different breads and things like that and then some other things that when they come in and buy their milk, they see other things that they like and go, ‘Oh yeah, I could try that.’”

K&E Ranch is located on 2052 Second Street and is open Monday through Friday from 9 a.m. to 5 p.m. The store is closed on Saturday and Sundays.