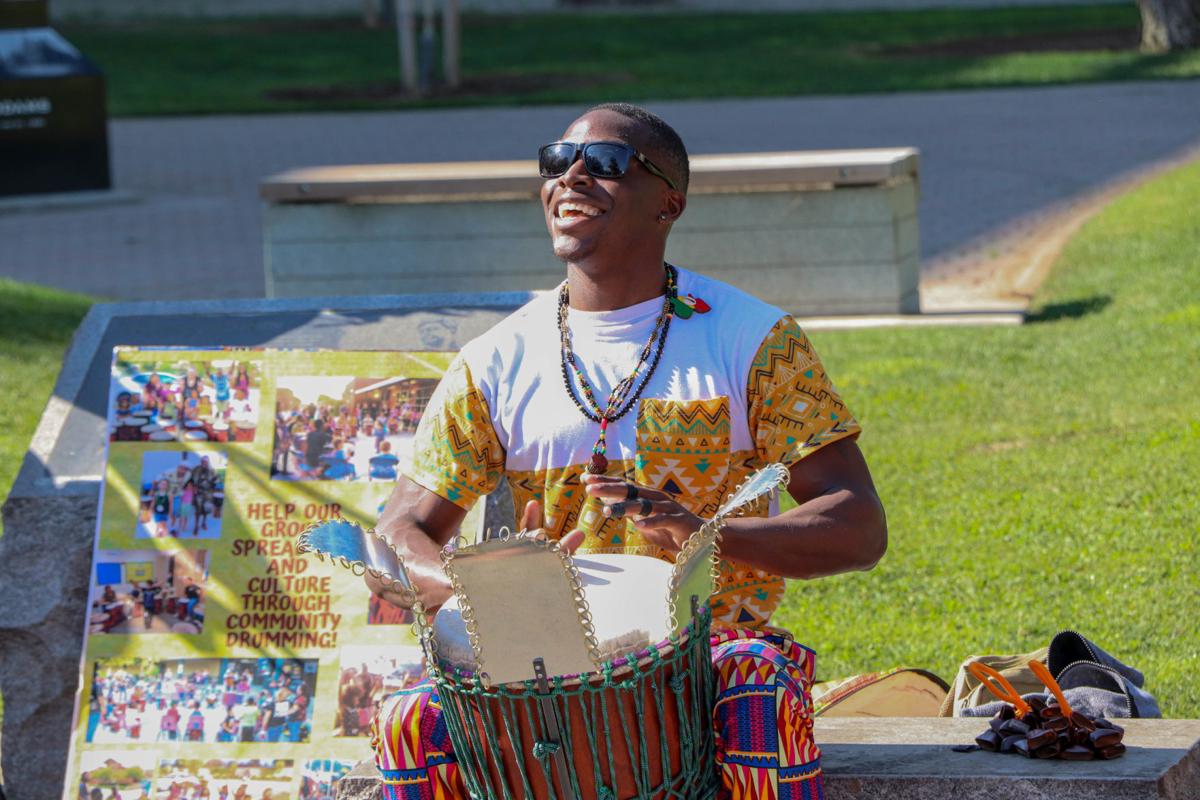 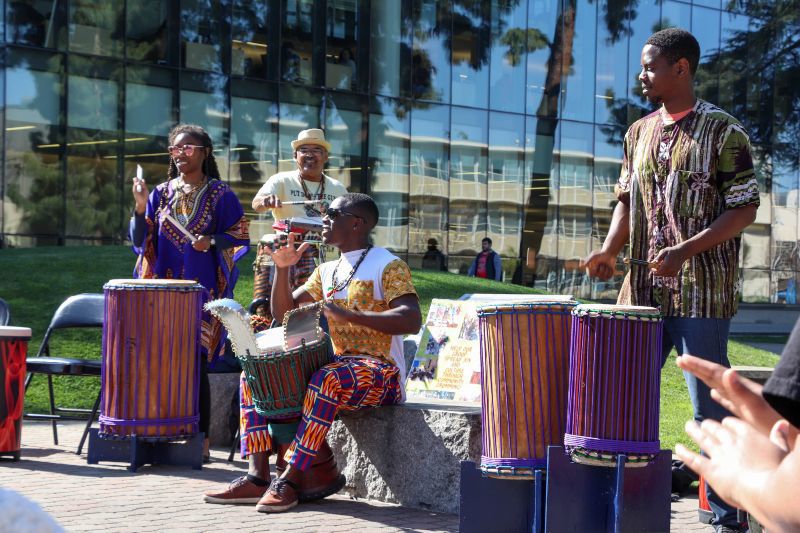 Donté McDaniel leads the three-member group Libota Mbonda. He said their goal is to share their love of drumming, bring African culture to life through music and emphasize music as a healing art form. 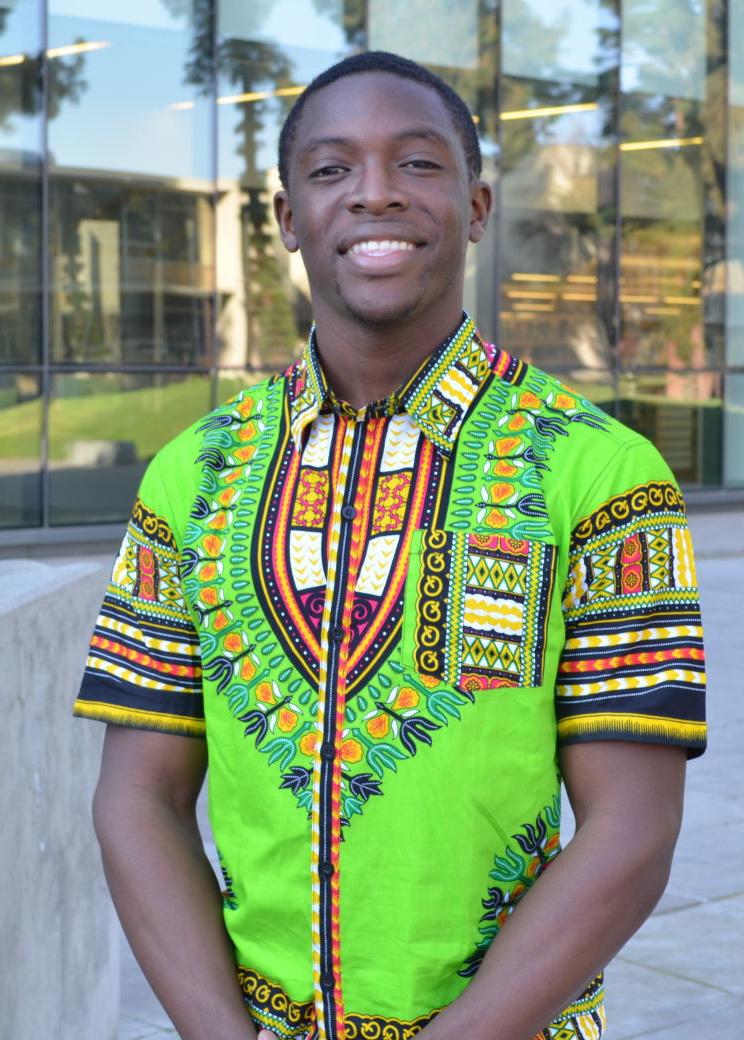 Donte McDaniel, a 2013 Selma High School graduate, is helping himself and others heal through his African drumming group, Libota Mbonda.

FRESNO – The melodic beat of drumming broke through the silence of the Peace Garden, electrifying the California State University, Fresno, campus. Nearly 20 African djembes (drums) were set up in a large circle as a group of students, staff and faculty beat their drums in unison, wide smiles forming across their faces.

As people walked by, some stopped to take in the scene. Others picked a drum, sat down and joined in. In the middle of the circle, a few individuals danced carefree, as the beat of the music shaped their every movement.

This is a healing drum circle, and the group behind it is local African drumming group, Libota Mbonda, which means ‘generation of the drum.’ Donté McDaniel leads the three-member group.

McDaniel is a 2013 Selma High graduate who earned his Bachelor’s Degree in Social Work at Fresno Pacific University and is now a second-year Fresno State Master of Social Work student.

His infectious joy and love for the music is apparent in his bright smile and the rhythmic way his fingers connect seamlessly with the djembe.

Since this past year, he and his fellow musicians have performed and led healing drum circles around the Central Valley at community events, for local schools and for nonprofits. This particular event at Fresno State on Feb. 14 was in collaboration with the African American Student Social Work Association, in celebration of Black History Month.

Libota Mbonda’s goal is to share its love of drumming, while also bringing African culture to life through music, and just as importantly, to emphasize music as a healing art form that has the power to bring communities together.

“Through drumming, children and adults can reduce anxiety, depression and stress, while creating an atmosphere that promotes community and social resilience,” McDaniel said.

For McDaniel, bringing awareness and exposure of African culture and music is personal. While growing up in Selma, he was one of very few African Americans in his class; sometimes the only one.

McDaniel said while his six brothers and sisters all graduated from Selma High School, they’ve moved on to pursue their various college and career paths.

“My aunts, uncles and cousins still live in Selma.”

His life changed in the third grade when an African drummer came into his classroom and performed. From that moment, McDaniel was entranced with the art, the beat and language of the music of his people. To this day, he smiles as he remembers the excitement he felt that day, as the beat of the djembe flowed into his soul.

McDaniel hopes to give young students the same enthusiasm he once felt, but also does so with a higher purpose. For his master’s thesis, he chose to merge his passion of drumming with his academics. Despite being a longtime musician, pairing the two was not something McDaniel ever anticipated.

“For me, drumming has always been separate from social work,” McDaniel said. “I always knew music could be used to bridge people together, but it wasn’t until last year that I became more interested in drumming intervention and music therapy among youth experiencing trauma or who lack mental health services. I didn’t want to be known as just the social worker that plays the drums on the weekends. I want to be able to say I’m actually using my gift to help others.”

This inspired McDaniel to create Libota Mbonda, which has now performed at or coordinated healing drum circles for nearly 20 schools across the Central Valley.

McDaniel’s work, in particular, is aimed at African American youth in middle school, and using drumming as an intervention for at-risk youth.

“Kids at that age are trying to figure out who they are,” McDaniel said. “By tying in African drumming, we are making connections back to their culture and history, while also helping them form their identity and providing them an outlet to practice their social and emotional skills.”

“These kids may not see African Americans represented in their schools, so to be able to make connections with them and for them to be able to say to us ‘hey, I look like you’ is so important. It’s those little moments that mean so much.”

Donté McDaniel is seeking financial support to purchase a set of 30 African drums to be used for community drum circles, drumming classes and drumming intervention and youth therapy in the San Joaquin Valley. To support his efforts, visit http://bit.ly/2vxjdTr. See Libota Mbonda in action at http://bit.ly/39fbtEf. Find them on Facebook: https://www.facebook.com/libotambonda/

Donté McDaniel leads the three-member group Libota Mbonda. He said their goal is to share their love of drumming, bring African culture to life through music and emphasize music as a healing art form.

Donte McDaniel, a 2013 Selma High School graduate, is helping himself and others heal through his African drumming group, Libota Mbonda.