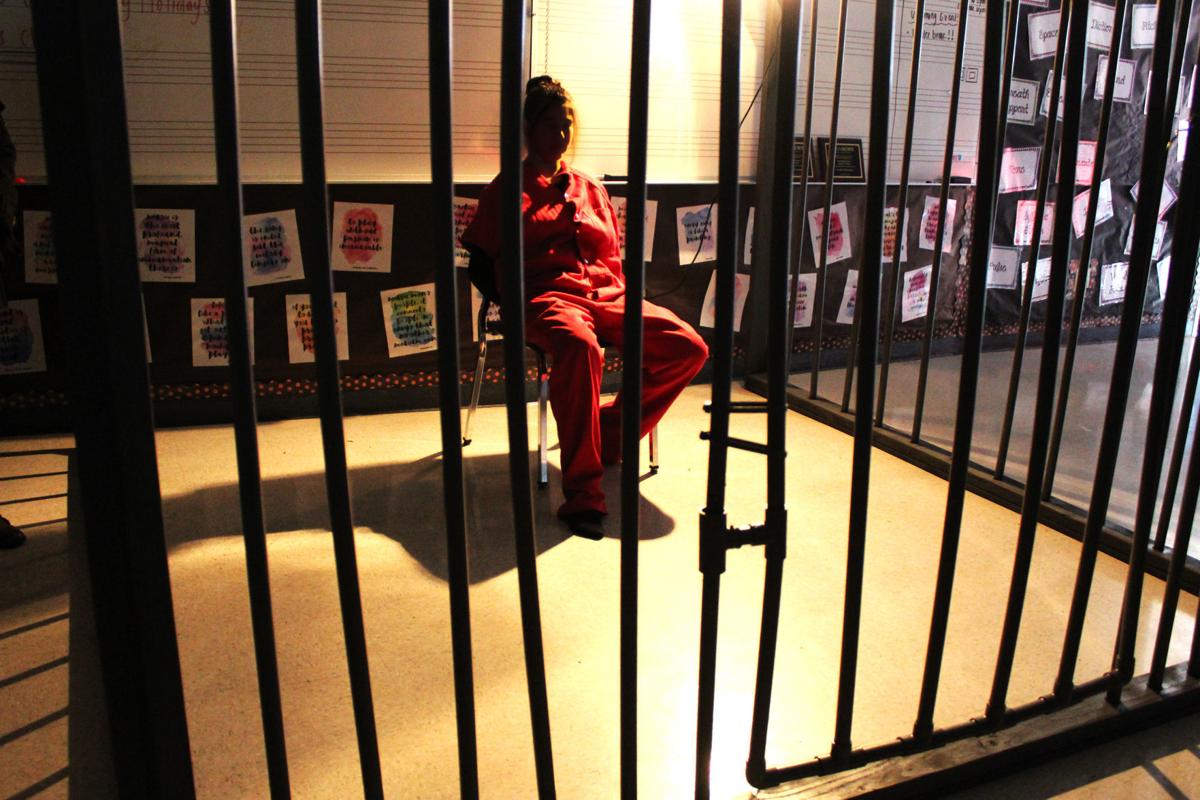 A jail cell is set up as part of CANDLE Inc.’s Reality Tour at Selma High School. The substance-abuse prevention program has parents and teens tour realistic scenes about the consequences of drug use to give participants a close-up look at the turmoil and grief caused when a family member uses drugs. 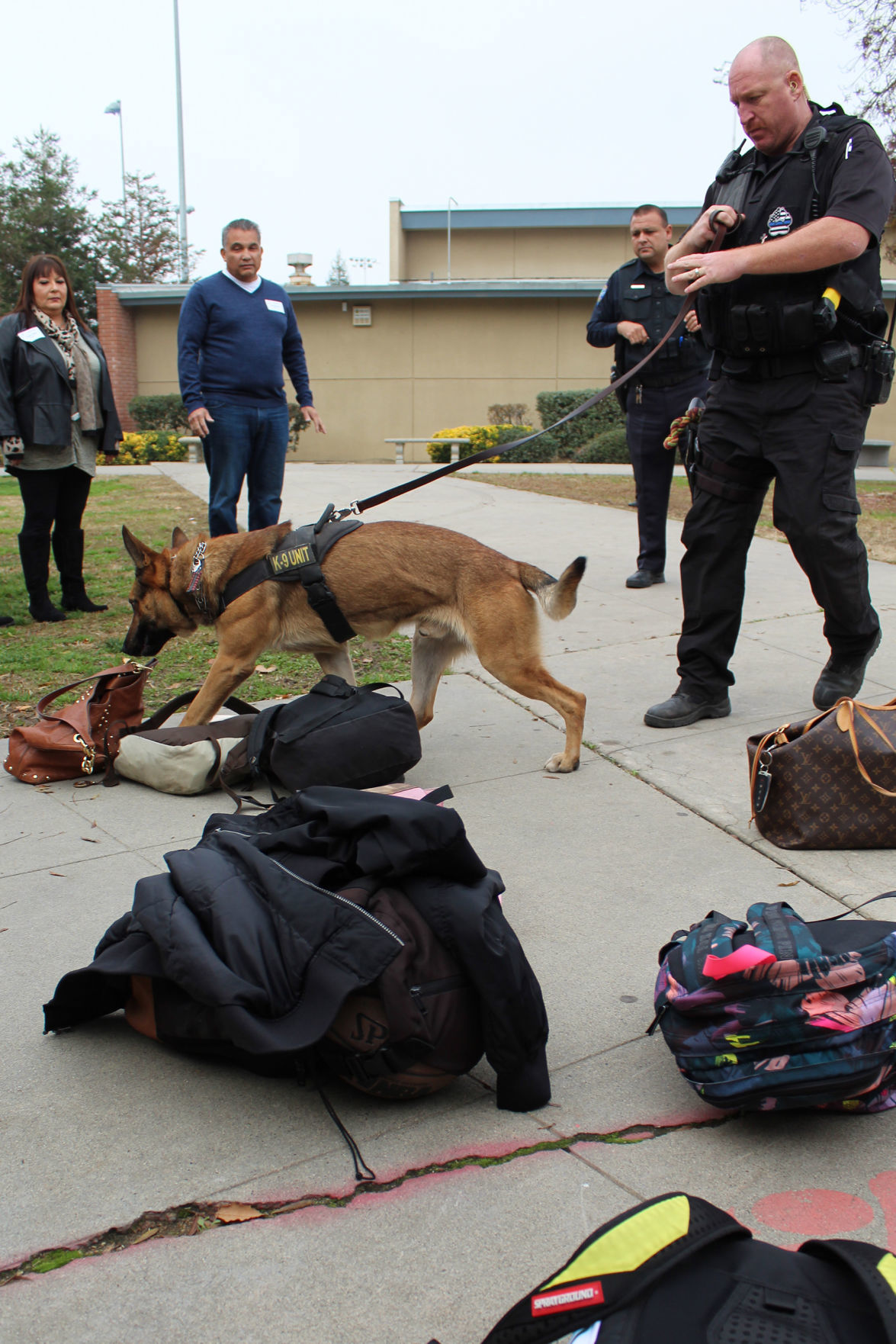 Selma Police Officer Justin Holt handles a K9 officer as backpacks and purses are checked for drugs during the Reality Tour at Selma High. 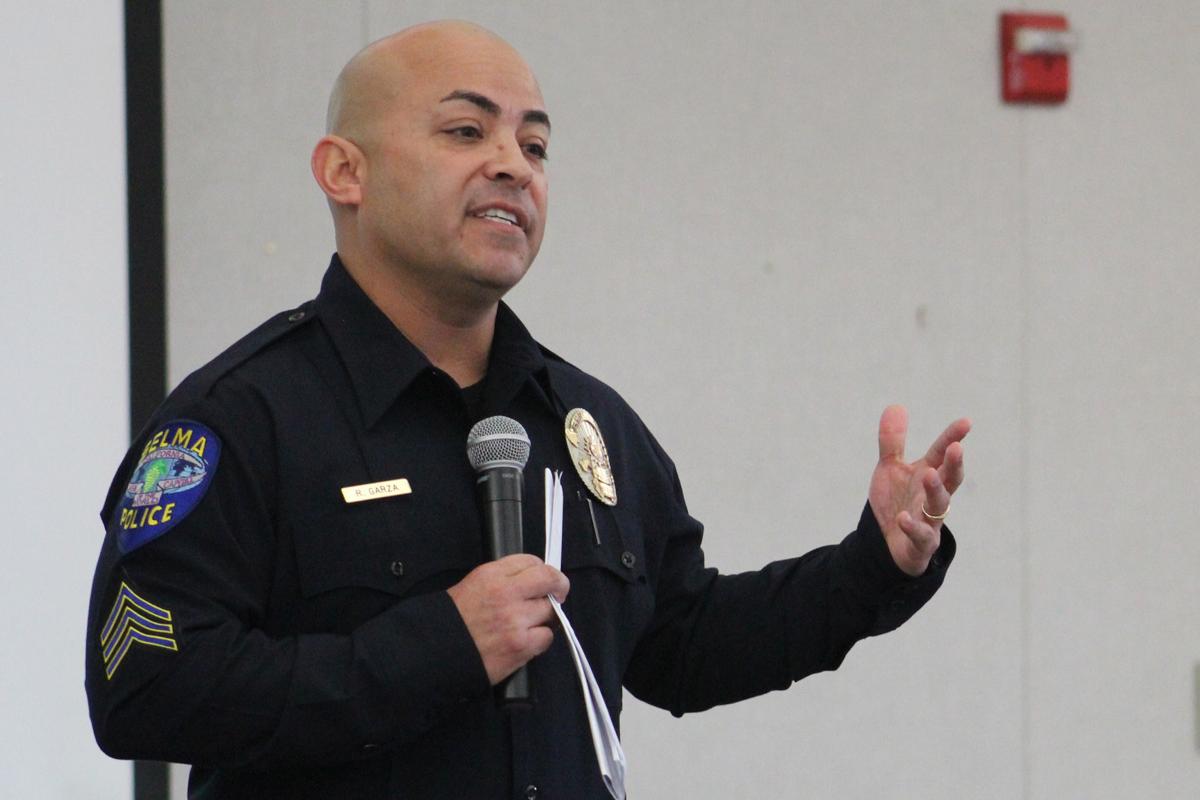 Selma Police Sgt. Rene Garza shares his own story during the Dec. 8 Reality Tour about a family member’s use and recovery from drug use. 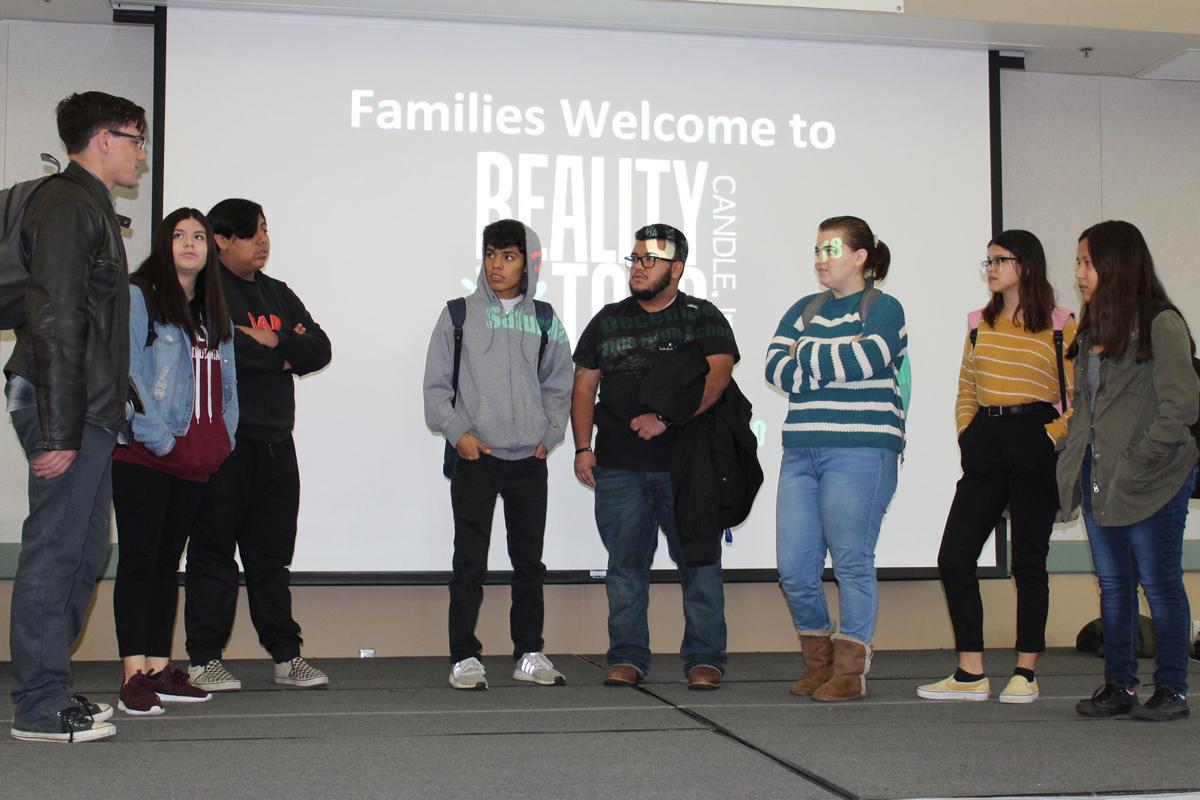 Actors with the Selma Arts Center reenact a party scene where drugs are offered to depict the pressure teens are under to use drugs and the choices they could make as part of the nonprofit CANDLE Inc.’s Reality Tour. 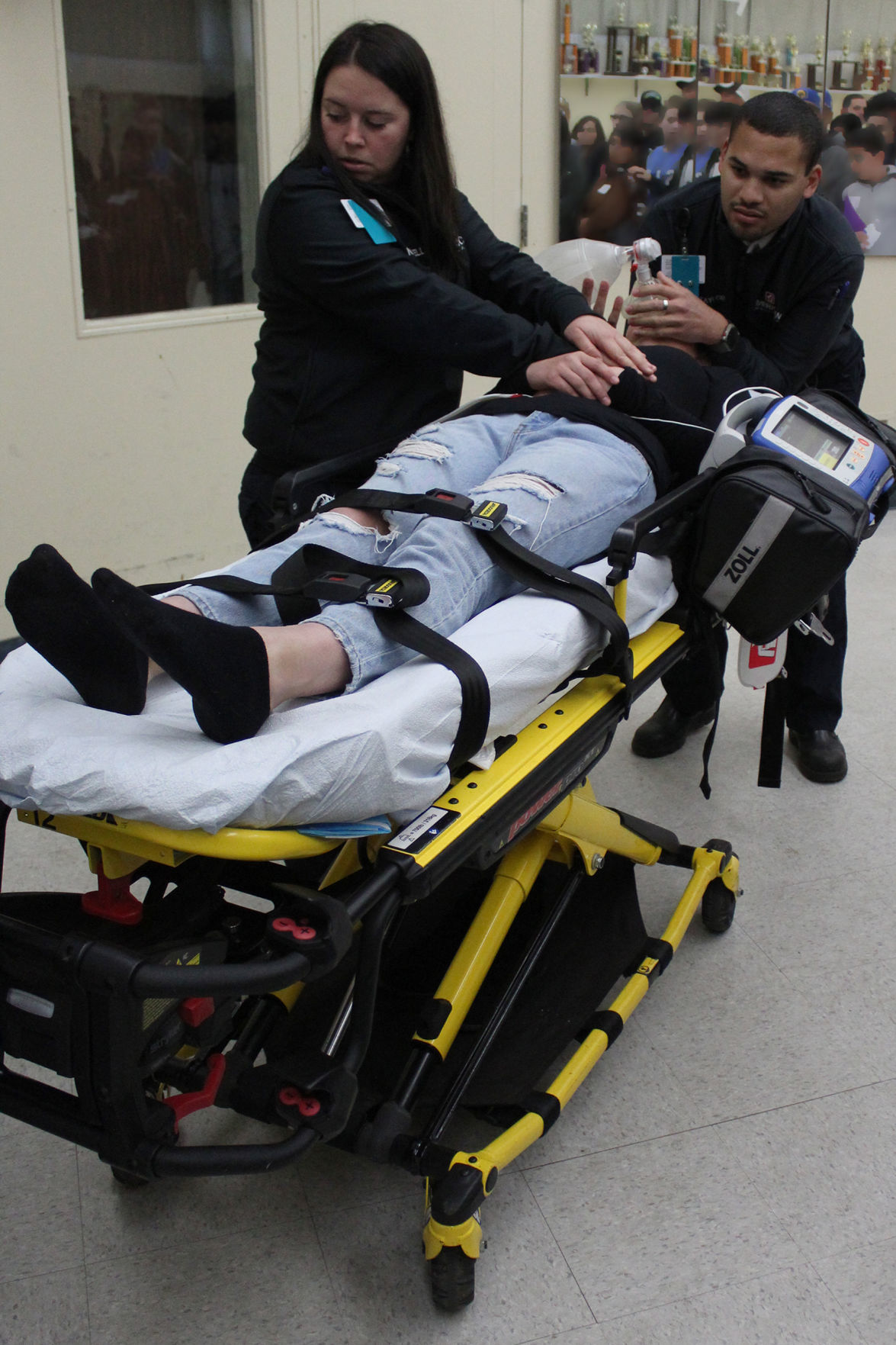 Crew members with American Ambulance act out a scene where they attempt to resuscitate a teen that dies from an overdose during the CANDLE Inc.’s Reality Tour. 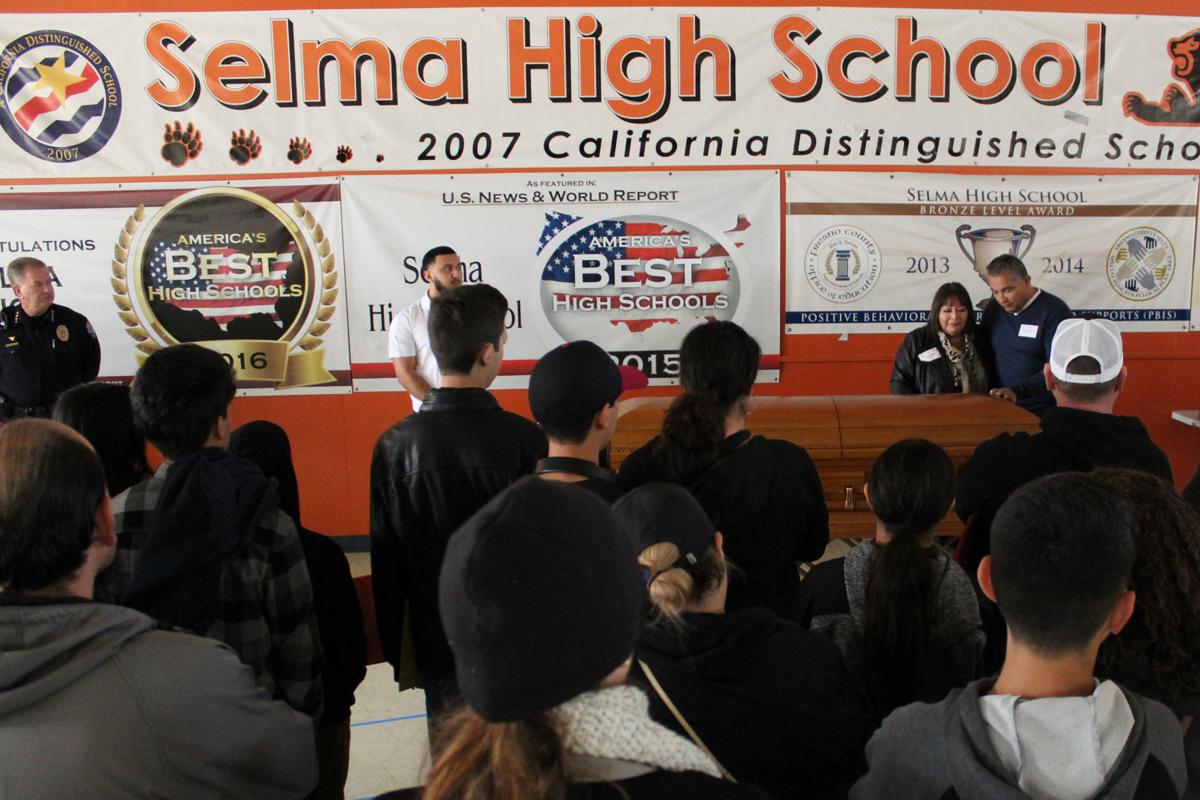 Parents are shown mourning their daughter during the Reality Tour at Selma High who dies from a drug overdose.

SELMA – During a recent tour at Selma High, an officer with the Selma Police Department rushed up to announce they’d been tipped off that drugs had been brought on campus. The campus tour came to a dead halt. Selma Police Officer Justin Holt rushed up with a K9 officer who sniffed everyone’s backpacks and purses. When the K9 identified a particular backpack, the scene erupted as a student was led away in handcuffs and her parents, on campus for the tour, shouted in anger and disbelief.

The scene was staged as part of CANDLE Inc.’s Reality Tour. Dozens of local teens and their parents attended as part of the non-profit’s effort to help youth steer away from a life of substance use.

“In some cultures, it’s hard for [parents] since there’s some stuff you don’t talk about,” organizer Juan Chavez said. “The Reality Tour is a good way to start the conversation and this gives them a way to talk with their kids. You can talk until the cows come home but seeing it, it’s something different.”

Chavez works with California Health Collaborative and said this is the second time the tour’s been given in Selma. Previously, it was hosted at Abraham Lincoln Middle School.

“We had real EMTs, the funeral service and officers come out. We kept it all local. Even the actors are from the Selma Arts Center,” he said of the effort to make the tour as realistic as possible.

The goal of the tour was to get parents and teens talking about drugs, prevention and hard life choices needed to avoid what was depicted in the scenarios that day – an overdose and death.

The tour went on to depict the teen as she was arrested for selling drugs.

“The cops are saying I’m a dealer and are charging me with a felony. I’m being treated like an adult and they’re really going to lock me up.”

A recording played as she sat handcuffed in a jail cell recounting the events that landed her there in the first place.

“You don’t care about me being in jail. You think you’re so much better than me? Imagine changing places with me. I’m just like you. I used to play video games with my little brother, get decent grades and was on the soccer team. I heard all about drugs, but just like you, none of this was going to happen to me.”

The teen started smoking marijuana and shoplifting to support that habit. She moved up to selling and using pain-killers and was transferred to an alternative school. She lied to her parents, using money meant for college for her habit instead.

After she was bailed out, she winds up overdosing at a party. Ambulance crews try to resuscitate her, but it’s too late.

“Don’t leave me, mi hija! She was a good girl,” her father cries out.

“She can’t be dead,” her mother cries hysterically. “She’s never coming back.”

The tour moves on to a funeral scene where her voice can still be heard.

“All my friends are more worried about talking to the cops and getting busted. In a few months, they won’t even talk me anymore. Maybe you’ll talk about me and remember me because once, I was just like you.”

Police Chief Greg Garner was among those coordinating the event and spoke to parents in the audience. He advised them that one of the best ways to steer their children away from drugs is to be heavily involved in their everyday life. He said there were two main goals of the Tour that day – help teens make choices to avoid drugs and promote communication between teens and parents.

“I’ve felt like this my whole career that the more parents are involved in the daily life of their kids, the less likely they’re going to get involved in something they shouldn’t. A big portion of this program is to encourage communication between parents and their children.”

Garner also warned parents to not be misled into thinking their children are safe from the temptation.

“One of the other messages we’re providing today is no matter how good a household you’re in, every child is susceptible and has the potential of making a bad choice and falling into a lifestyle of drug use. Every parent, no matter how good their student is doing, needs to be involved in their daily lives to know what’s going on so they can communicate and hopefully, prevent a tragedy.”

After the tour, Selma Police Sgt. Rene Garza shared his own life experience with drug addiction. It wasn’t his own addiction, but a family member’s, that affected their family.

“I’ve never seen a Reality Tour before. It had a big impact on me because it’s so true.”

He’s seen children die because of their parent’s addictions and said the case where an 11-year-old died because of drugs is another sad memory.

“The case sticks in my head every single day of an 11-year-old who passed away from drugs. It was very, very awful and an unfortunate situation.”

In his own family, his youngest brother in their family of nine brothers got hooked on drugs and even stole from their parents to support his addiction. He winds up in jail after cashing stolen checks

“This is my blood brother. He came here, committed a crime and then went to Reedley and committed a crime. Not only was it embarrassing, it was tough because I was living through my brother, if that makes sense.”

After two years in jail and getting involved with gangs, the brother “saw the light and went to a bunch of rehabs,” Garza said. The brother is now in recovery, has been sober for 15 years and went on to graduate from college, get married, become a father and own a home. He’s now a youth minister and travels the country, he said.

“This is my little brother. I’m very proud of him and I love him so much. The reason I tell you his story is one, it’s never too late. And two, I want you to know where I come from. I’m human, just like you. I just wanted to share that story with you because it doesn’t matter what environment you’re raised in,” he said of everyone’s life circumstances. “It comes down to you. But parents, it does start in the home. It does not start anywhere else but the home. Trust me on that.”

Among actors that day was Yvette Montijo and her daughter, Brilla. Louis Franco stepped in to play a role as well.

Brilla Montijo said while she was nervous to take part, she wanted to send a message to the students.

“I hope they take the message and don’t do drugs. They all have a family and people who care about them so they need to take care of themselves. Drugs take the possibilities away and make you all messed up.”

Louis Franco said he hopes the students in attendance realize their life choices do matter to others in the community.

“In a small community like ours, all of our lives are really connected,” he said. “When you’re young sometimes you don’t realize it’s not just you. We’re all touched by each other but sometimes we don’t realize it.”

Montijo said she hopes this effort to thwart drug use reaches those in the audience that day.

“This is an attempt to get them to reach out beyond themselves and see what an impact this has. People say, ‘you’re good actress that you can cry like that,’ but the feelings are so profound. It’s every parent’s worst nightmare because drugs and alcohol are ubiquitous. They’re everywhere.”

She agrees that preventing drug use and its related criminal activity takes efforts such as the tour.

Learn more about the Reality Tour online at https://candleinc.org/.

SELMA — For businesses on 2nd Street in Selma, the addition of cafe lights isn’t just about ambiance, but building a more robust and comfortab…

Elementary school students will return to class this month

SELMA — Elementary School (grades K-6) students in the Selma Unified School District will return to the classroom in the month of March.

A jail cell is set up as part of CANDLE Inc.’s Reality Tour at Selma High School. The substance-abuse prevention program has parents and teens tour realistic scenes about the consequences of drug use to give participants a close-up look at the turmoil and grief caused when a family member uses drugs.

Selma Police Officer Justin Holt handles a K9 officer as backpacks and purses are checked for drugs during the Reality Tour at Selma High.

Selma Police Sgt. Rene Garza shares his own story during the Dec. 8 Reality Tour about a family member’s use and recovery from drug use.

Actors with the Selma Arts Center reenact a party scene where drugs are offered to depict the pressure teens are under to use drugs and the choices they could make as part of the nonprofit CANDLE Inc.’s Reality Tour.

Crew members with American Ambulance act out a scene where they attempt to resuscitate a teen that dies from an overdose during the CANDLE Inc.’s Reality Tour.

Parents are shown mourning their daughter during the Reality Tour at Selma High who dies from a drug overdose.