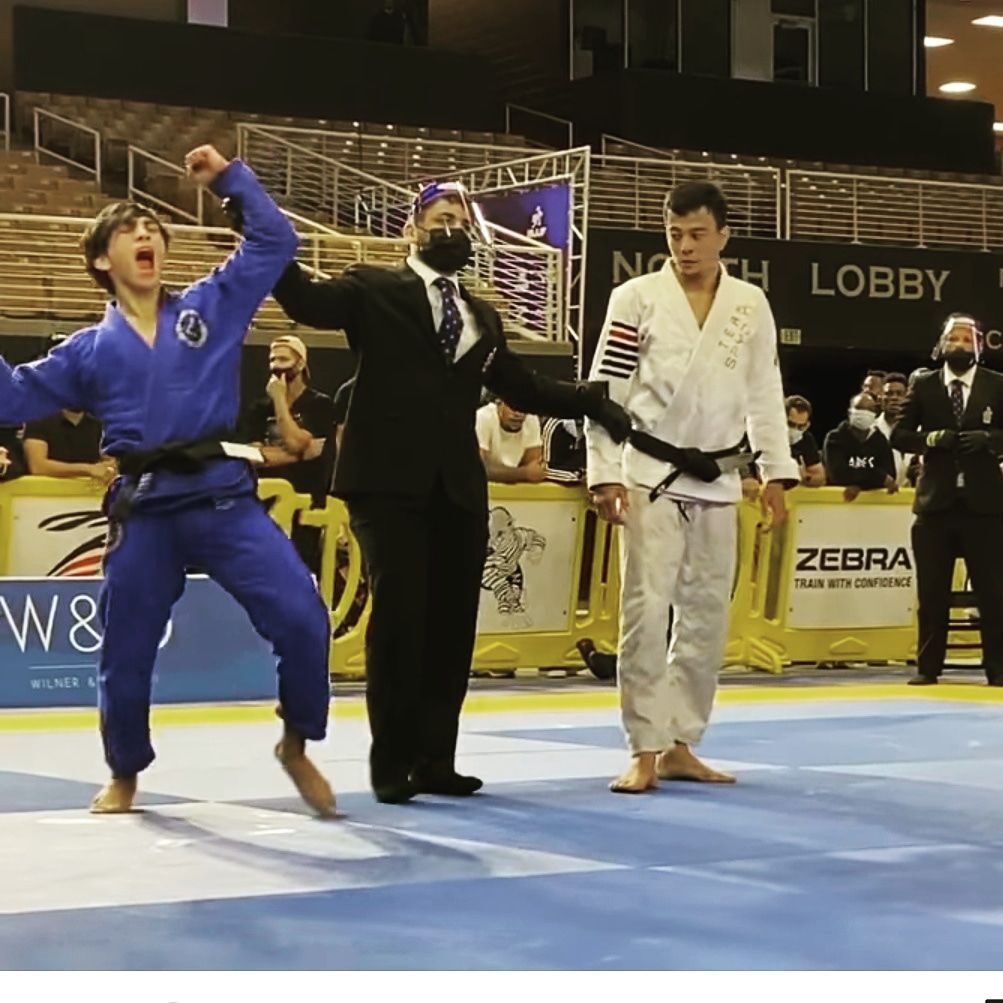 Joshua Cisneros, left, is announced the winner of a semi-finals match against Paulo Miyao at the IBJJF Pan-American Championships in Orlando, Florida, earlier this month. Cisneros would go on to win gold in the divison. 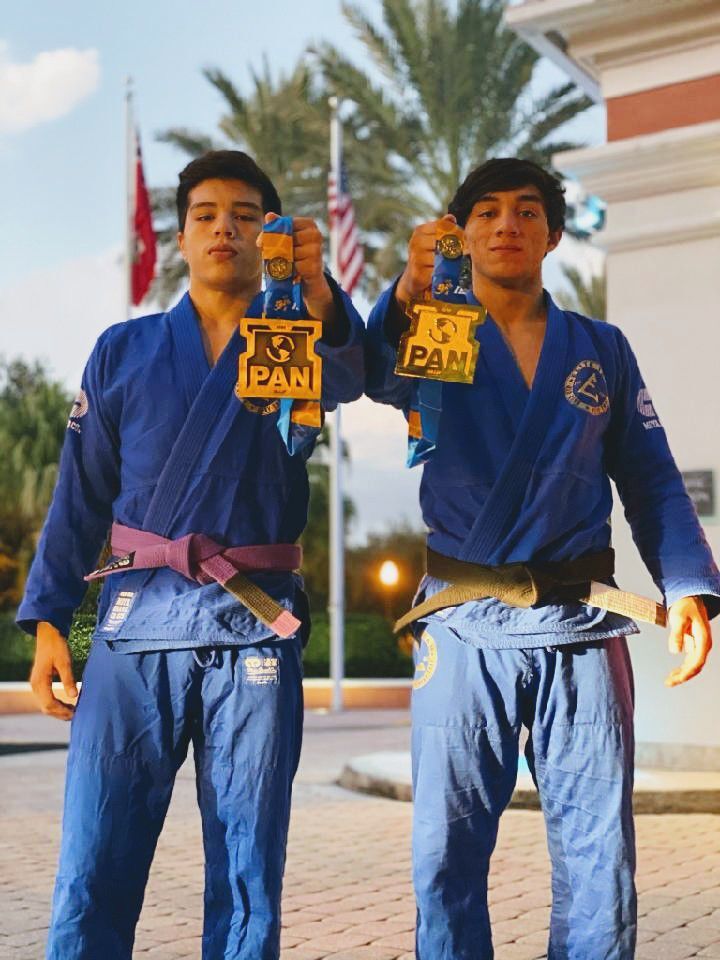 Jacob, left, and brother Joshua Cisnero hold up their medals from the IBJJF Pan-American Championships. 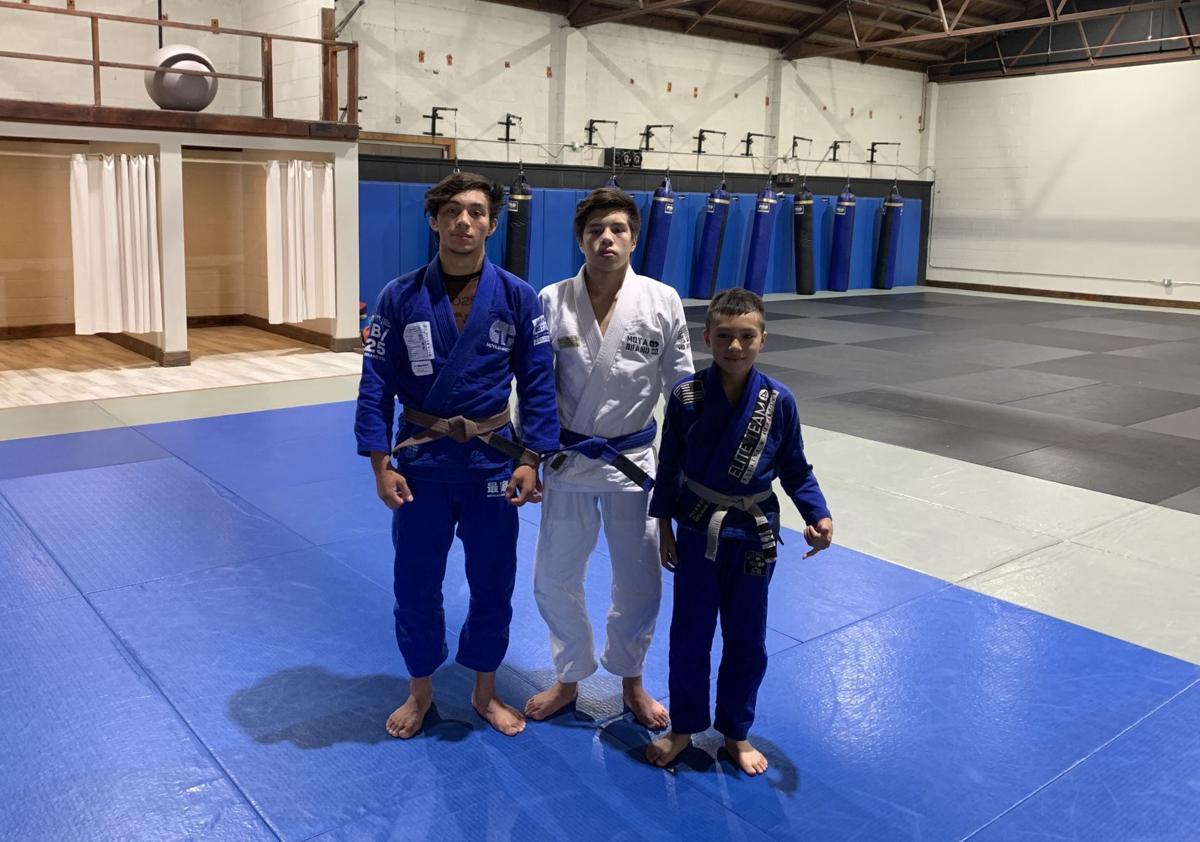 SELMA — For Joshua and Jacob Cisneros, winning runs in the family.

The brothers, who are from Selma but fight out of Elite Team in Visalia, hail from a long line of decorated competitors.

Having a culture of competition has helped the brothers grow as athletes, Jacob said.

“We have people to push us as well and it’s a lot more training for us and a lot more experience because we also get [our older brother’s] insights on how their competitions go and they help us train,” Jacob said. “Having brothers means you have permanent training partners.”

Joshua started competing in jiu-jitsu when he was 12, while Jacob began at 10 years old.

Joshua, who only just earned his black belt in September, went into the Pan-Ams as an underdog, managed to come away with the biggest upset of the tournament, according to many fight fans. BJJ news source AttackTheBack.com reported that Joshua taking gold in his debut was “one of the biggest shocks of the tournament.”

“It feels really good. It shows all the hard work and the training I’ve been doing,” Joshua said. “And to get it over a guy like Paulo Miyao, who’s literally a legend in the sport that I’ve been watching fight at the highest level against the top guys, I have learned from him and now that I’ve gotten to fight him and beat him, that’s a huge accomplishment. That’s probably the highlight of my career right now.”

Joshua met Miyao, the division’s heavy favorite and winner of the 2015 competition, in the quarterfinals.

“For me, that quarterfinals match was the finals. Everything revolved around that match,” Joshua said.

In addition to meeting and conquering new challenges, Joshua said he enjoys the traveling and seeing new places that comes along with attending North America’s various tournaments.

What he said he enjoys most about the sport, though, is that it works out the mind as well as the body.

Currently a student at College of the Sequoias, Joshua plans to open his own gym and train a new generation of fighters when he’s done competing.

SELMA — Trustees of the Selma Unified School District stayed local on Nov. 10 when they selected a search firm to help find a superintendent t…

SELMA — Clay Jacobsen has worked on many television shows, including the Jerry Lewis Telethon and "The Dating Game."

SELMA — As of Friday evening, it looked like Selma would be changing Mayors — and, for the first time in the city’s history, he'll be chosen b…

Raisin Capital of the World: The most wonderful time of year

The Selma Downtown Holiday Open House is in full swing as you can see when you walk the streets of Selma,  visiting those stores participating…

Joshua Cisneros, left, is announced the winner of a semi-finals match against Paulo Miyao at the IBJJF Pan-American Championships in Orlando, Florida, earlier this month. Cisneros would go on to win gold in the divison.

Jacob, left, and brother Joshua Cisnero hold up their medals from the IBJJF Pan-American Championships.