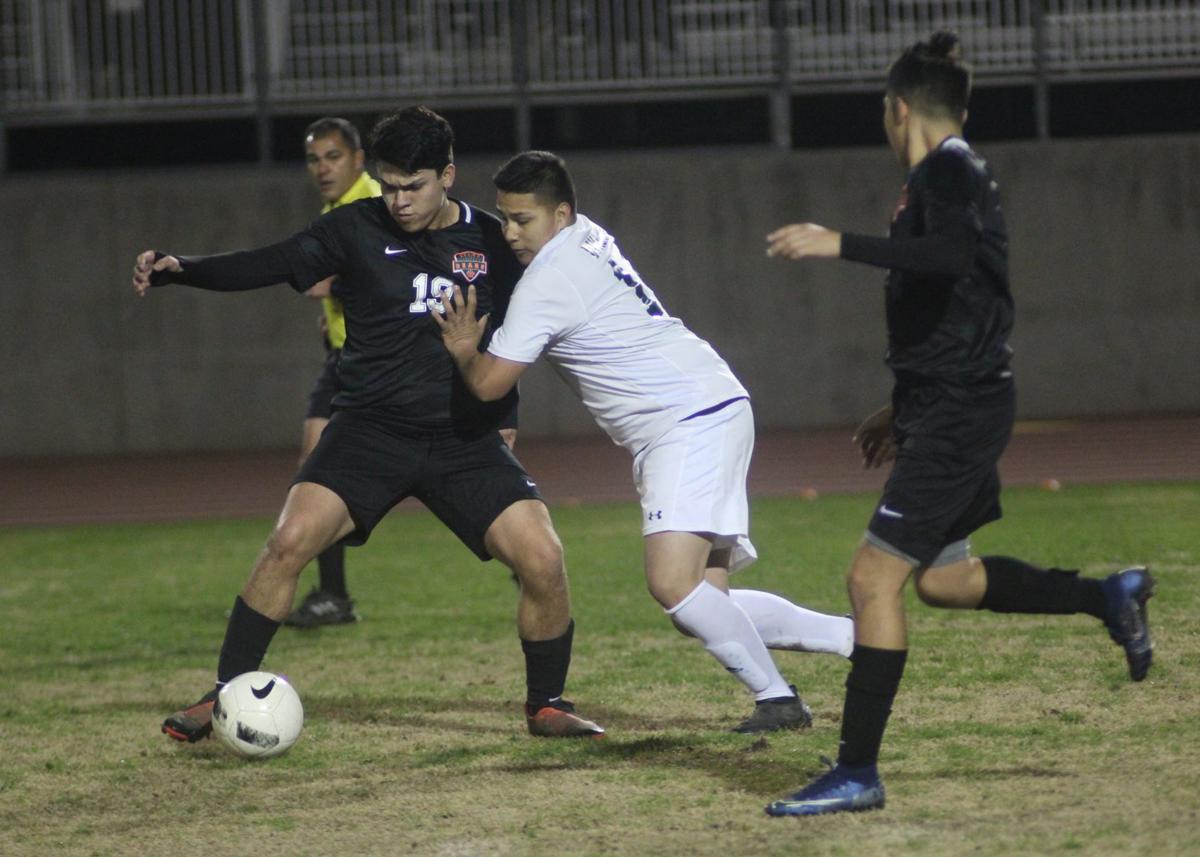 Selma's Eduardo Urieta and Kingsburg's Nathon Meza attempt to gain possession of the ball during the first half of a Central Sequoia League game at Vikings Stadium on Thursday, Dec. 12. 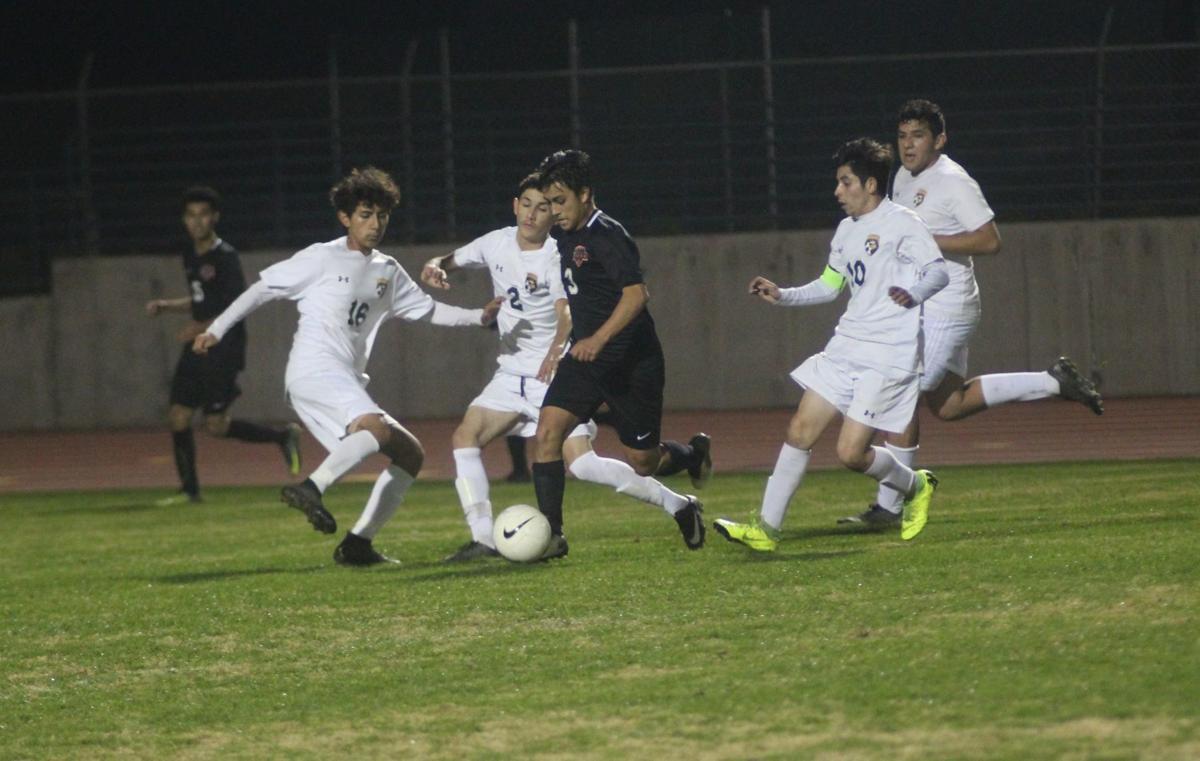 Selma's Paul Ortiz dribbles the ball past multiple Kingsburg players during the second half of a Central Sequoia League game at Vikings Stadium on Thursday, Dec. 12. 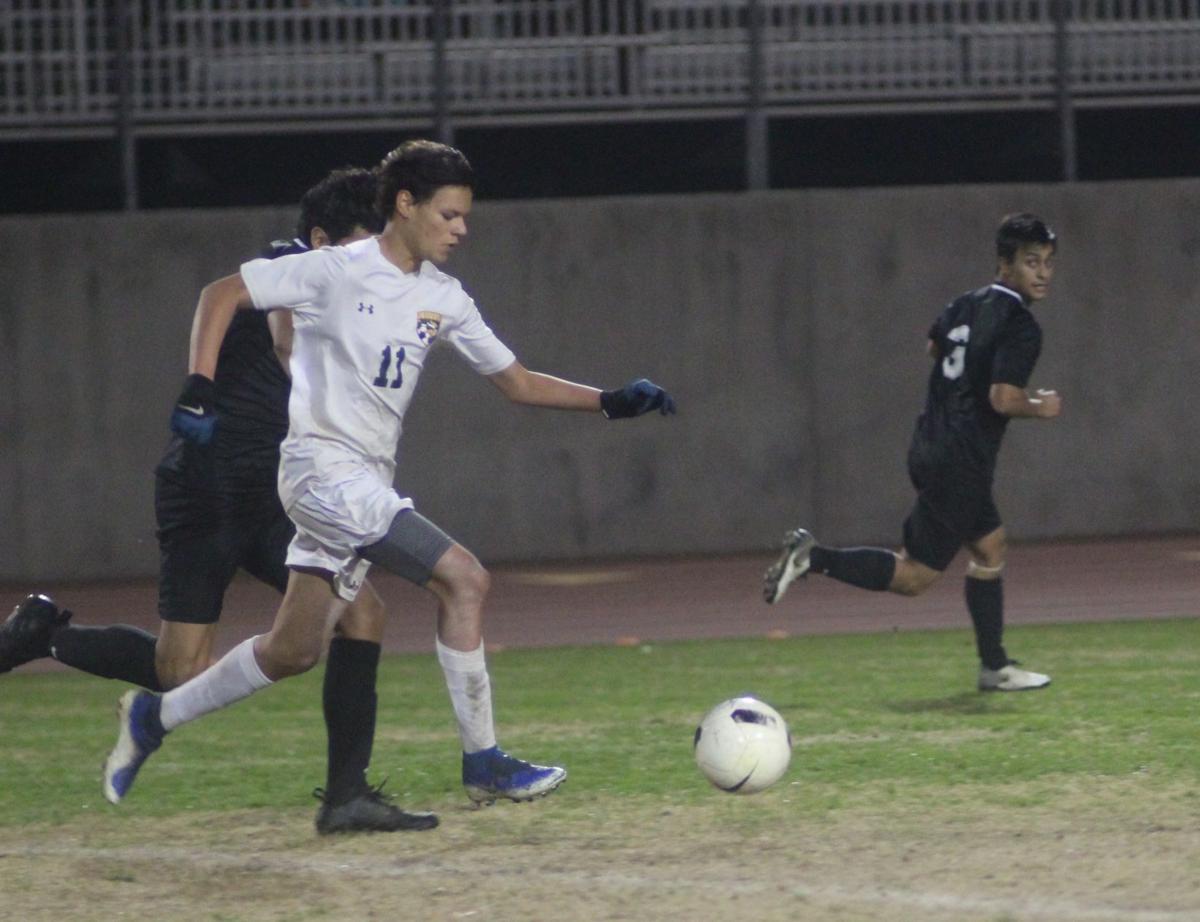 Kingsburg's Jacob Shelby dribbles the ball down the field during the second half of a Central Sequoia League game against Selma at Vikings Stadium on Thursday, Dec. 12. 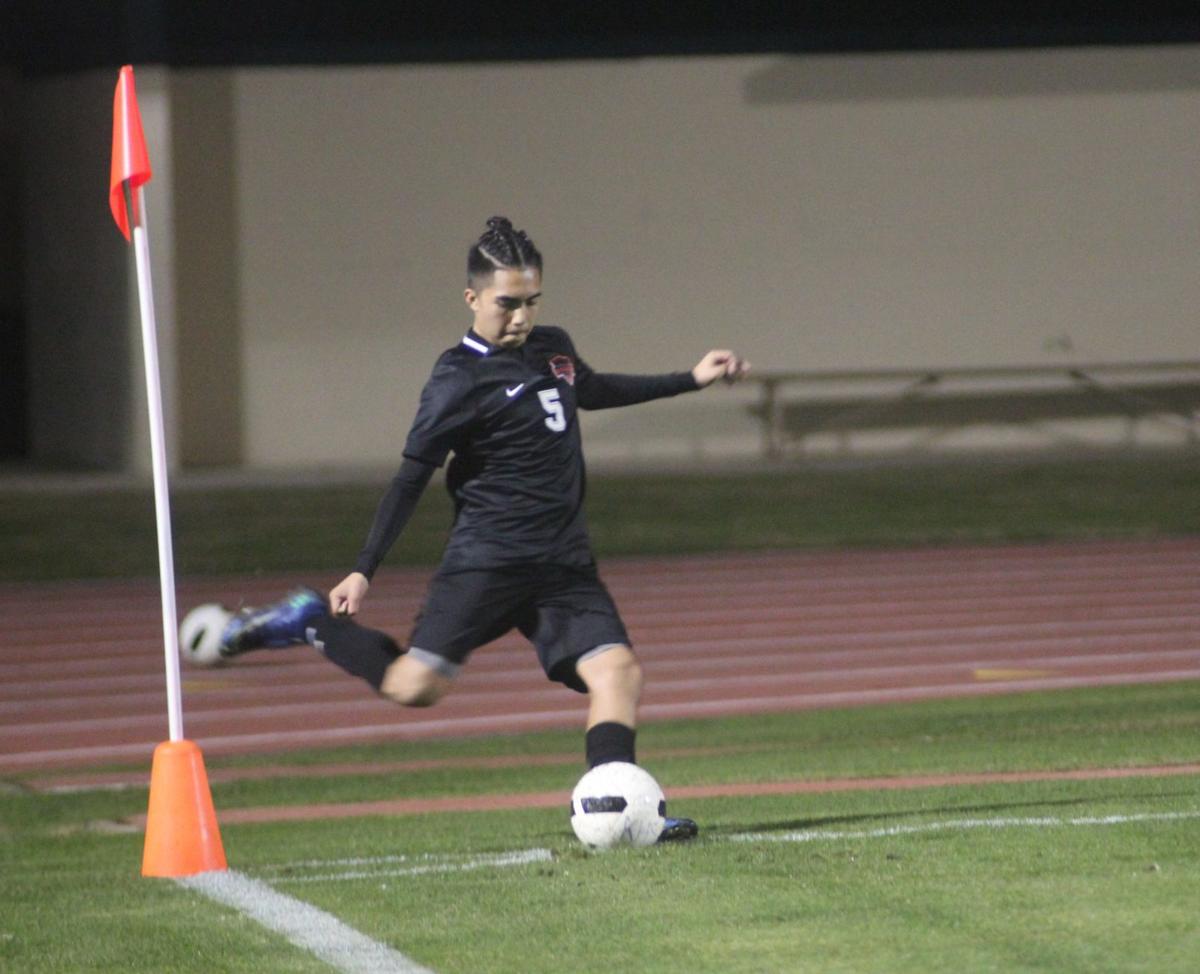 Selma's Giovani Segovia attempts a corner kick during the second half of a Central Sequoia League game against Kingsburg at Vikings Stadium on Thursday, Dec. 12.

Selma's Eduardo Urieta and Kingsburg's Nathon Meza attempt to gain possession of the ball during the first half of a Central Sequoia League game at Vikings Stadium on Thursday, Dec. 12.

Selma's Paul Ortiz dribbles the ball past multiple Kingsburg players during the second half of a Central Sequoia League game at Vikings Stadium on Thursday, Dec. 12.

Kingsburg's Jacob Shelby dribbles the ball down the field during the second half of a Central Sequoia League game against Selma at Vikings Stadium on Thursday, Dec. 12.

Selma's Giovani Segovia attempts a corner kick during the second half of a Central Sequoia League game against Kingsburg at Vikings Stadium on Thursday, Dec. 12.

KINGSBURG - After the Selma Bears earned a hard-fought win over the Kingsburg Vikings on Thursday, it was a game that made head coach Ruben Zamora reminisce about the rivalry during his playing days.

“This is what Selma and Kingsburg used to be,” Zamora said. “It used to be an intense game, grinding until the end, they came back and we pull it off.”

Behind two goals from Pedro Rangel, the Bears (3-6-1, 2-0 CSL) edged out the Vikings (7-6, 1-1 CSL) in a 2-1 Central Sequoia League victory at Vikings Stadium. The sophomore tied the game in the first half and his eventual game winner was scored in the 92nd minute in overtime.

An unselfish Rangel praised his teammates performance after the game.

“The goal is a team goal,” Rangel said about his second goal of the night. “It wasn’t only my goal, it was the whole team’s goal. We all put effort into that play and we got the result and it turned into a goal.”

The rivalry matchup went into overtime after the game was tied 1-1 through 80 minutes. Both goals were scored in the first half with the first coming from the foot of Kingsburg freshman Jacob Shelby and Rangel scoring the equalizer later on.

Shelby scored on a wide open shot in the first few minutes of the game and the Bears didn’t capitalize on multiple opportunities to tie the game including a missed penalty kick from Daniel Garcia. Rangel would get the equalizer on a shot that arced to the left corner of the net.

“We always tell him ‘Trust your weak foot,’” Zamora said about Rangel’s first goal. “He scored with his left foot from the outside. I was so happy that he scored on that.”

The Bears narrowly missed an opportunity to take a one goal lead into halftime after offsides was called on a play where Giovani Segovia put the ball in the net.

After both teams failed to score in the second half, the rivals held each other scoreless again in the first 10-minute overtime period.

In the 92nd minute, Rangel had the perfect opportunity to give the Bears the lead after Vikings goalie Luke Berry overplayed the ball and tripped on the wet grass, providing a wide open shot for the Selma sophomore. An enstatic Rangel celebrated the go-ahead goal by hugging Zamora and his teammates on the sideline.

Once the first whistle was blown, the game was gritty on both sides as multiple yellow and red cards were issued throughout the entire game.

After Selma’s Eduardo Simon was given a yellow card in the first half, a total of four yellow cards and and two red cards were issued in the second half.

“I got to tread lightly, but the game gots to be kept under control,” Kingsburg head coach Steven Vargas said. “In these rivariles, people officiating need to know that it’s going to get that way and they need to stop it right away. It got card happy and from there both teams lost their heads and it was what it was.”

“It’s one of those games where you fight for everything and your emotions are high,” Zamora said. “I have a lot of inexperienced kids. A lot of people from [junior varsity], a lot of new people, but every single one of them has been stepping up. We’ll work on our temper, but we pulled it off today.”

It was Selma’s first time winning back-to-back games this season after a 5-2 win over CSL opponent Central Valley Christian on Dec. 10. The Bears started the season at 0-3-1 prior to the two-game winning streak.

After the victory over Kingsburg, the Bears went 1-3 at the Cougar Classic at Clovis High School on Friday and Saturday. Selma fell 5-2 to Sanger and lost 1-0 to Tulare Union on Friday. On Saturday, the Bears fell to Yosemite 1-0, but they defeated Tulare Western 2-1.

Last season, the Bears were 12-8-3 overall and 6-3-1 in CSL play, which was good enough for a second place finish in league. Selma was eliminated in the first round of the CIF Central Section Division II playoffs after a 3-0 loss to Edison. It was the second straight season that the Bears were eliminated after one game in the playoffs. Selma fell 4-1 to Edison in the quarterfinals of the Division II playoffs during the 2017-18 season.

“I feel this is the year that could push us forward,” Zamora said. “Every year, we’ve been knocked out of the playoffs in the first round and I think this year we’re going to change the story.”

As for Kingsburg, the Vikings went into the game on a 4-1 stretch after starting the season at 1-3. Kingsburg has had early success including a championship at a tournament in Corcoran on Dec. 7. After the game against Selma, the Vikings competed at a tournament in Fowler, finishing with a 2-2 record with wins over Caruthers (1-0) and Sierra (4-1).

Kingsburg has already surpassed its win total from last season by two games. Last season, the Vikings were 3-18-1 overall and 0-10 against CSL opponents. Kingsburg earned its first CSL victory of the season after defeating Immanuel 10-1 on Dec. 10. After going 2-18 in CSL games in the past two years, Vargas expects this year’s squad to take a leap and compete for a league title.

“Right now, I see Dinuba as the cream of the crop,” Vargas said. “I personally think we’re better than [Selma] and I really see Dinuba being our only competition.”

Kingsburg last played CSL opponent Hanford West on the road on Tuesday (after press time). The Vikings will host Farmersville in a non-league matchup tonight at 6 p.m. After non-league matchups with Fowler (Dec. 27) and Golden West (Jan. 3), Kingsburg will resume CSL play at home against Dinuba on Jan. 7.

Selma last played Dinuba in a CSL road game on Tuesday (after press time). The Bears will go on the road to play against non-league opponent Chowchilla on Thursday. After a non-league matchup with Madera on Dec. 27, the Bears will return to CSL action in a road game against Hanford West on Jan. 3.