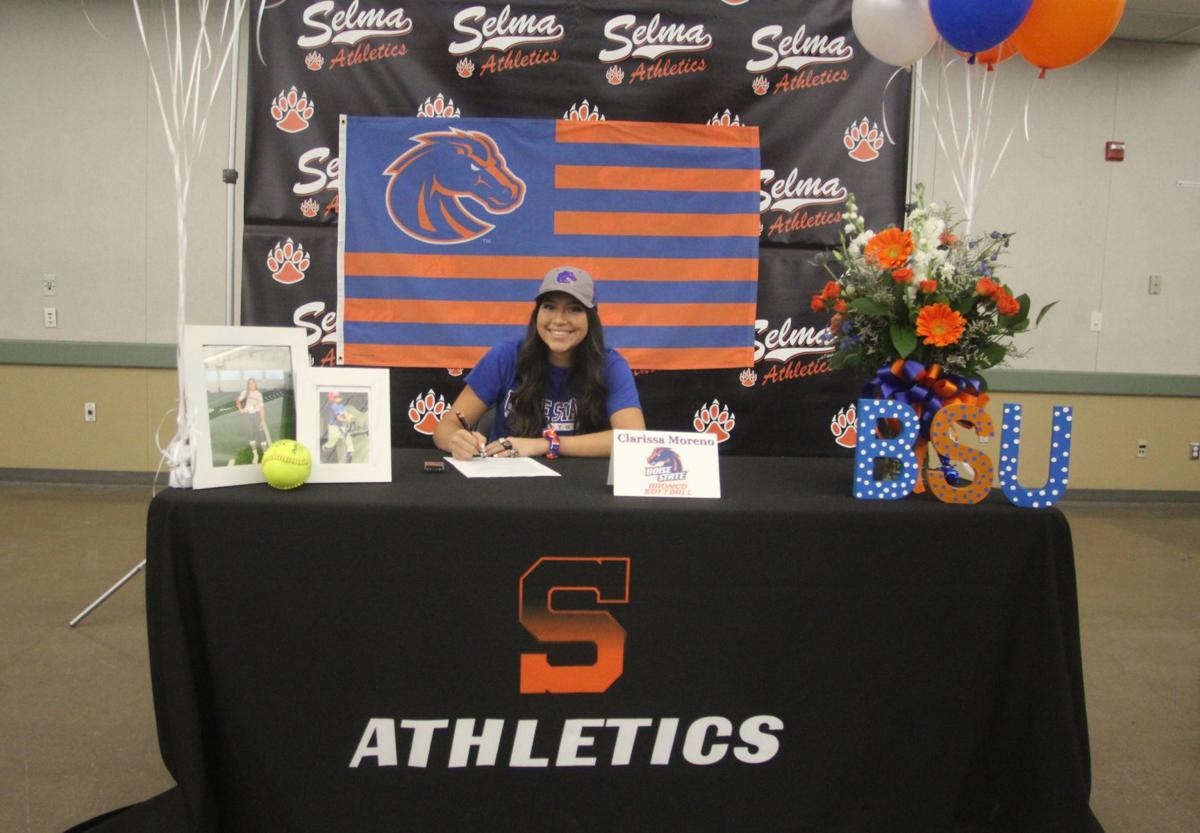 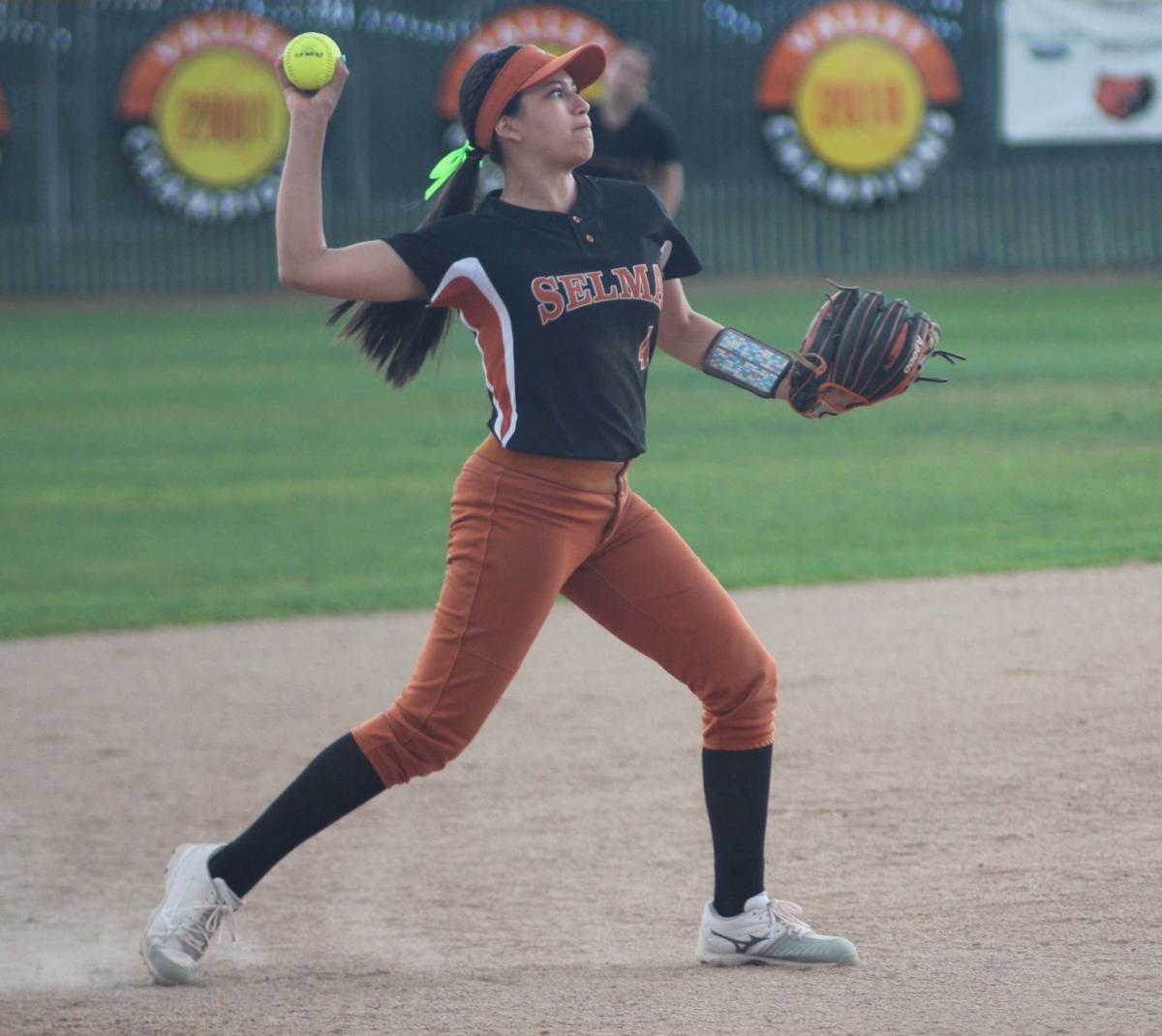 In this April 10, 2019 Enterprise Recorder file photo, Selma shortstop Clarissa Moreno attempts to throw a runner out at first base during the third inning of a Central Sequoia League game against Kingsburg at Duran Diamond on April 2. 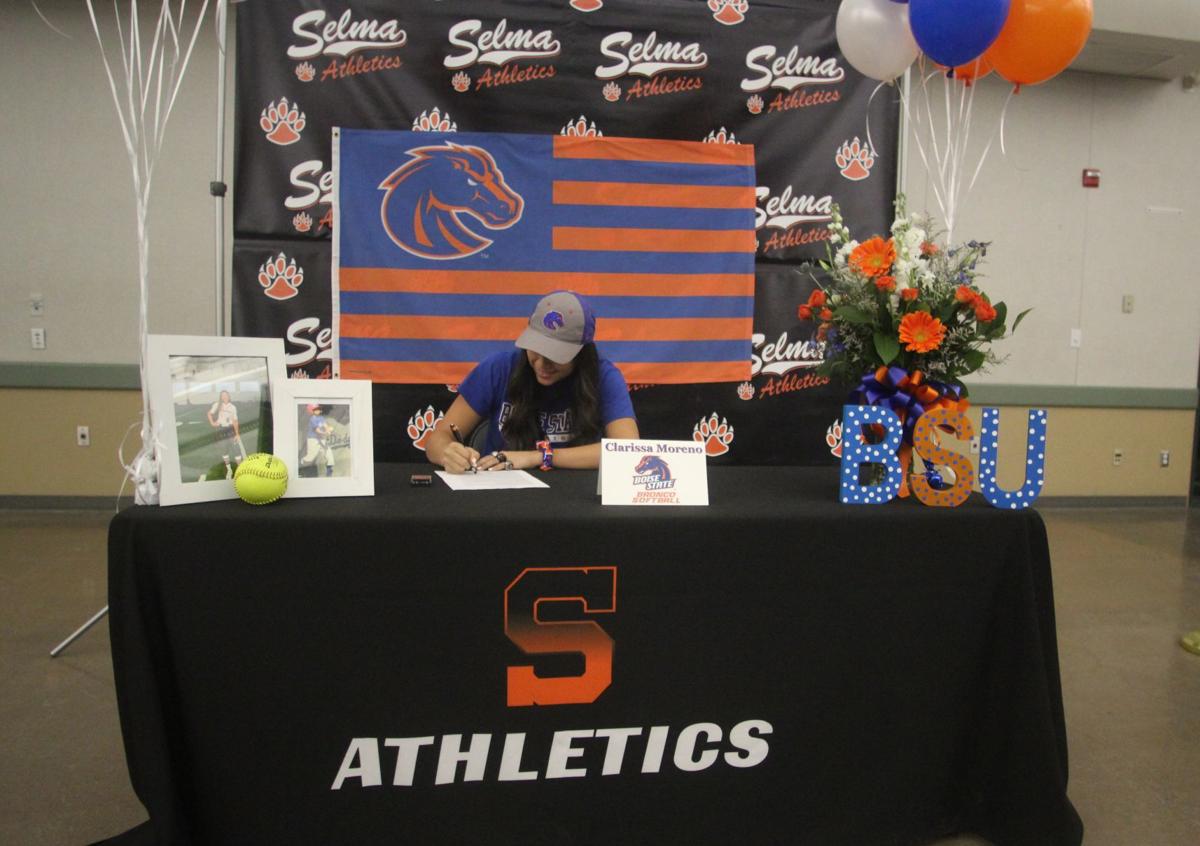 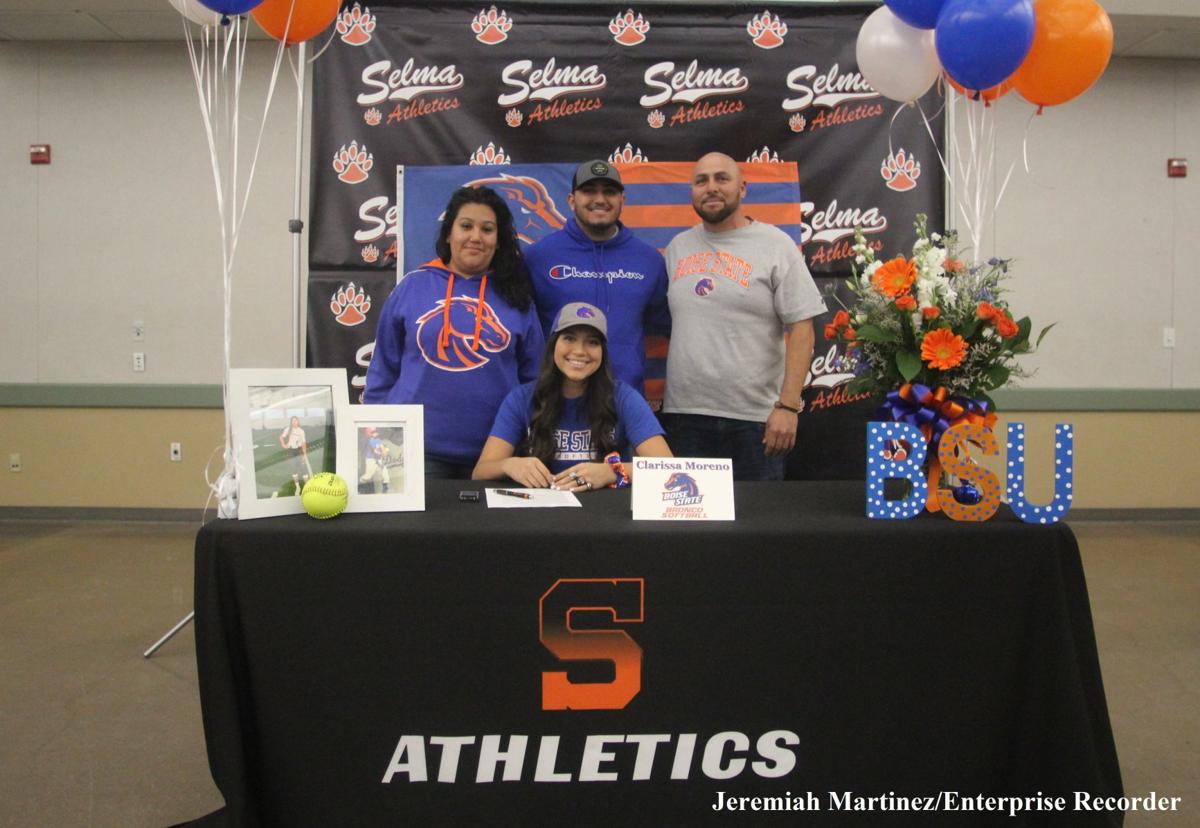 Selma's Clarissa Moreno smiles for a picture with her family before signing her National Letter of Intent to play softball at Boise State University at Selma High School on Tuesday, Dec. 3.

SELMA - Clarissa Moreno is taking her talents to the Mountain West.

The Selma High softball player signed her National Letter of Intent to continue her athletic and academic career at Boise State University in a ceremony at the Selma High dining hall on Tuesday, Dec. 3.

Moreno was verbally committed to the Broncos since she was a sophomore and she was ecstatic that her next step is official.

“Right when I stepped onto the campus, you could tell this community, everybody is involved,” Moreno said. “The campus is beautiful, the coaches really take care of you. I just really liked it.”

Competing in the Mountain West with Broncos will give Moreno a chance to play against Fresno State at Margie Wright Diamond, a venue where she helped Selma High win back-to-back Central Section titles in 2017-18.

“I’ll definitely be used to it because of Valley, but it’s going to weird seeing my former teammates [watch me play],” Moreno said about playing at the Fresno State home venue.

Moreno was part of three Central Section winning teams at Selma High - two in softball and one in basketball - and played for a Valley title in volleyball. The Bears volleyball team finished as the runner up in the Division V bracket in 2018.

During her junior season on the diamond, Moreno batted .380 with five home runs, 28 RBIs, 30 hits, and scored 24 runs. Moreno earned First Team honors in the Central Sequoia League as a junior.

On the hardwood, Moreno was part of a historic Selma girls basketball team that won its first Central Section championship in program history. Moreno was a 2018-19 CSL First Team selection after averaging 11.0 points 5.5 rebounds, and 2.5 steals per game game against league opponents. In volleyball, Moreno had the second most kills for the Bears at 191 as a junior. Moreno didn’t play volleyball this year.

“They’re are plenty of athletes that have the ability to do that, but it’s a whole different story as far as setting your priorities, saying no to other things that get in the way of you dream, being disciplined, and being able to do it on the biggest stage,” Romig said. “Those are the ingredients that separates. She certainly does that as an athlete, but that’s the same thing she does as a person. Watching her do that for so many years, in some respects, it's not a surprise because she does that everyday and it never goes away.”

Before he entered his first year as the head coach of the Selma softball team last season, Chris Tapia coached Moreno when she was in middle school. During this time, Tapia said Moreno was one of the players that helped him eased into the transition of coaching softball from baseball.

“Coming in with the transition from baseball to softball, I leaned on her and a couple of her more experienced teammates to help me with some of the things between the two sports,” Tapia said.

“I’ve always held a high regard for her skills and her experience level knowing that she’s played in some of these higher level travel tournaments on a national stage. It was comforting having them help me grow as a coach.”

Moreno, who has mainly played shortstop for the Bears, was recruited as an infielder for the Broncos. Boise State took a heavy interest in her when former coach Cindy Ball watched her played at tournament with the Central California Dirt Dogs travel team. Ball left the Broncos to coach at the University of Central Florida.

“It was fortunate that we had the relationship with Boise State to where they come and watch us a lot,” Central California Dirt Dogs coach Russ Heffley said. “Cindy Ball, who originally recruited her, was there and got to see her and she would come watch my daughter because that’s where my daughter was going to go. She saw Clarissa and she asked me about her and I’m like ‘She’s a baller, she’s a gamer.’”

During the summer, Moreno played for the Dirt Dogs 18-and-under Gold team that finished in third place at the Premier Girls Fastpitch National Championships in July. The tournament featured 90 teams throughout the country and it was the second straight year that the Dirt Dogs placed third.

Heffley coached Moreno since she was playing for the 10-and-under Dirt Dogs team as an eight-year-old. When Heffley first coach Moreno, Heffley said he knew he coaching a special talent.

“You could see it at eight years old, playing up at eight and being with 10s,” Heffley said. “We went to 10-and-under NSA [National Softball Association] Western Nationals that year and she was the starting shortstop at the time on the 10-year-old team. I knew she was special, did I know if she was going to be a Division I kid? At that age you always hope so, but I would say once she was about 12-years-old, you kind of knew she was special.”

The Selma High track team has been practicing at the newly renovated Staley Stadium for the past weeks with new equipment, which has head coac…

SELMA - Before concluding the regular season on Tuesday, Selma continued its playoff push with a 67-64 win over Immanuel on Feb. 4.

Selma lose in second annual 'Battle of the Bears'

SELMA - The Selma Bears clinched early wins, but were outclassed by the Buchanan Bears for the second consecutive year.

In this April 10, 2019 Enterprise Recorder file photo, Selma shortstop Clarissa Moreno attempts to throw a runner out at first base during the third inning of a Central Sequoia League game against Kingsburg at Duran Diamond on April 2.

Selma's Clarissa Moreno smiles for a picture with her family before signing her National Letter of Intent to play softball at Boise State University at Selma High School on Tuesday, Dec. 3.