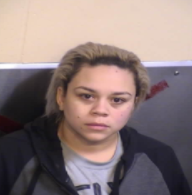 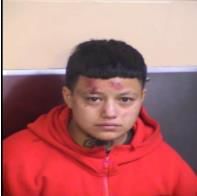 SELMA —  At about 7:45 p.m, on Tuesday, Feb. 16, officers were on scene at Home Depot regarding a call of a shoplifter. Before the officer left he was advised by loss prevention that there was a suspicious subject in the store that appeared to be attempting to take items.

The suspicious subject, later identified as Mia Delarosa, 21 of Fowler, had been advised prior that she was not allowed in Home Depot due to suspicion of past thefts.

Officers were advised that Delarosa had arrived at the store with another female who was in the parking lot waiting in a vehicle. Officers obtained the description of the vehicle and set up in the area to keep visual on the vehicle.

The vehicle then stopped at Floral and the 99. As officers approached the vehicle, the driver allegedly began to drive off and turned into the parking lot of Valero in the 3000 block of Floral. Officers initiated a felony stop due to there being an unknown number of people in the vehicle and the fact that a felony had just allegedly occurred at Home Depot.

The driver, identified as Brittany Zaragosa, 31 out of Selma, was arrested without incident. The passenger Mia Delarosa exited the vehicle then allegedly refused to cooperate as officers asked her to keep her hands up and walk back to them.  Delarosa was taken down by officers and placed into custody. Upon a check of the vehicle there were several items found in the vehicle that had been taken from Home Depot and other stores in the area, police sad.  The two have also been arrested for thefts before. They were both arrested and transported to the Fresno County jail on charges of commercial burglary, conspiracy to commit burglary, theft with priors, resisting a public officer, trespassing, possession of a controlled substance and possession of drug paraphernalia.