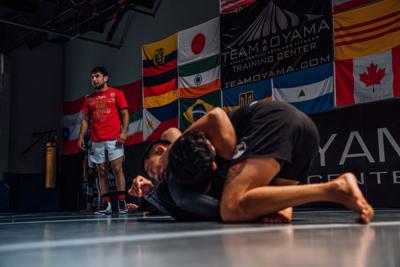 After an incredible performance at the UFC 250 prelims, Alex Perez is already waiting for his next opponent.

“I’m just waiting for my management team to let me know what’s next,” Perez said. “I’m willing to fight wherever, whether it’s on Fight Island or back in the states.”

Perez, a former Lemoore High wrestler, scored a rare technical knockout victory with leg kicks against Jussier Formiga at UFC 250 on June 6. The TKO stoppage came with 4:06 left in the round. According to ESPN Stats & Info, Perez is just the 11th fighter in UFC history to win via finish by leg kicks.

He was one of four fighters to earn Performance of the Night.

“It’s a little part of the game plan of staying on the feet, attacking the legs and attacking the body,” Perez said. “It just so happens that the leg attack worked better than the body attack.”

It was Perez’s third consecutive victory and he is 11-1 in his last 12 fights. Perez is 6-1 in the UFC and his overall mixed martial arts record is 24-5.

Perez moved up to No. 5 in the flyweight division after the fight. To climb higher in the rankings, Perez said he needs to maintain his work ethic. It’s that same work ethic that he developed throughout his time wrestling for former Tigers coach Kent Olson. Perez attended Lemoore High from 2006 to 2010.

“It’s just outworking my opponent, outwork everybody at the gym, outwork everybody in my division,” Perez said. “I don’t know what they do, but in my head if I try to separate myself from them, it will be that I’m trying to outwork them. I think that’s what separates me from a lot of other people.”

UFC 250 took place behind closed doors at the UFC Apex facility in Las Vegas. The promotion has produced seven events with no fans since May 9 due to the COVID-19 pandemic. Perez said he got tested for the coronavirus everyday throughout the week in Vegas.

With no audience at UFC 250, Perez said the experience of fighting in an empty venue was much more calm.

Perez was originally supposed to fight at a UFC Fight Night event in San Diego on May 15, but the show got canceled due to the California State Athletic Commission (CSAC) banning all combat events through the month of May.

With his gym closed due to the pandemic, Perez said he had to take an old school approach for his training.

“You had to go Rocky Balboa style,” Perez said. “Me and my friends live close to each other, we’ll go and hit pads and spar. It wasn’t the prettiest camp, but it wasn’t the worst camp either. I feel like you create your own opportunity and I just went old school with running, hitting pads and stuff that people get away from.”

Perez said he’s always disciplined in training but he had to be more cautious with his diet because he wasn’t burning as many calories with an unusual camp.

Before making his way to the UFC, majority of Perez’s fights occurred at the Tachi Palace & Casino for now-defunct promotion Tachi Palace Fights, where he was 10-3. After graduating from Lemoore High, Perez would continue his wrestling career at West Hills College Lemoore and he moved on as an assistant coach for the wrestling team at Selma High.

Perez’s pride for the Central Valley was shown after his win over Formiga when he looked into the camera and uttered a “559” shoutout on ESPN.

Whenever he steps into the octagon, Perez wants to show the youth in the Valley that it’s possible to accomplish their dreams. He mentioned past Lemoore athletes such as Lorenzo Neal, David Ausberry and Isaiah Martinez as examples.

“You have guys that made it to the next level out of small towns,” Perez said. “I know Hanford has had a couple of guys get recruited from big schools. You got guys from Clovis as well. You got guys getting drafted to the NFL. I just like to show people that you could do something if you put your mind to it.”

As he waits for his next fight, Perez has already put his last win behind him.