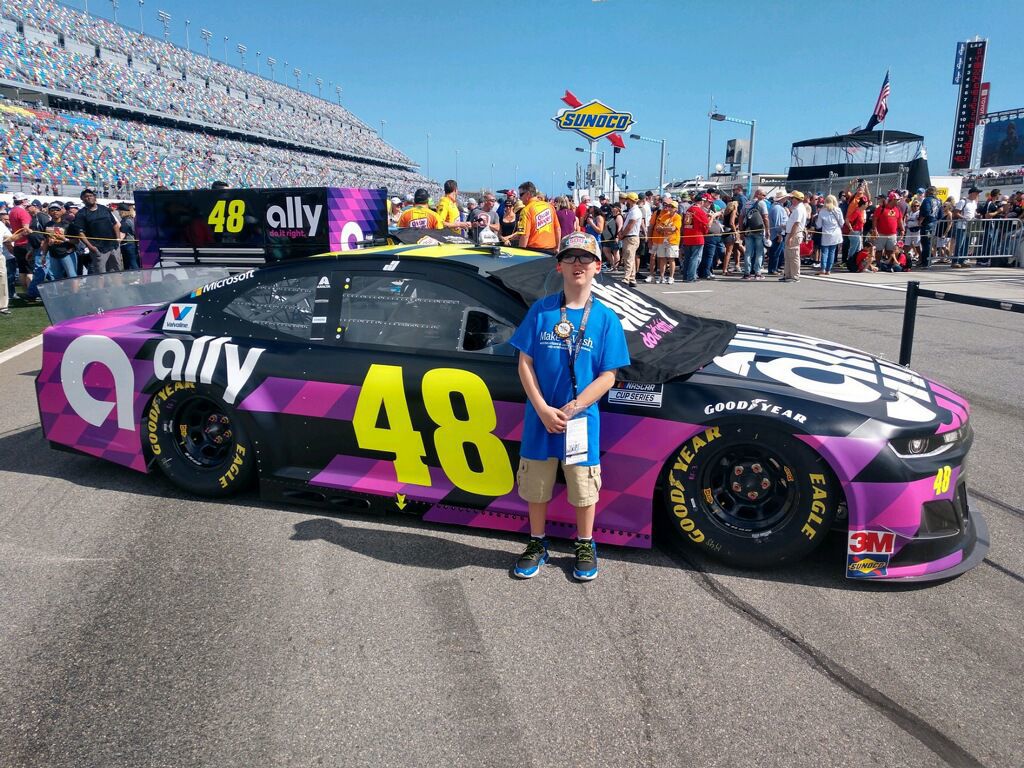 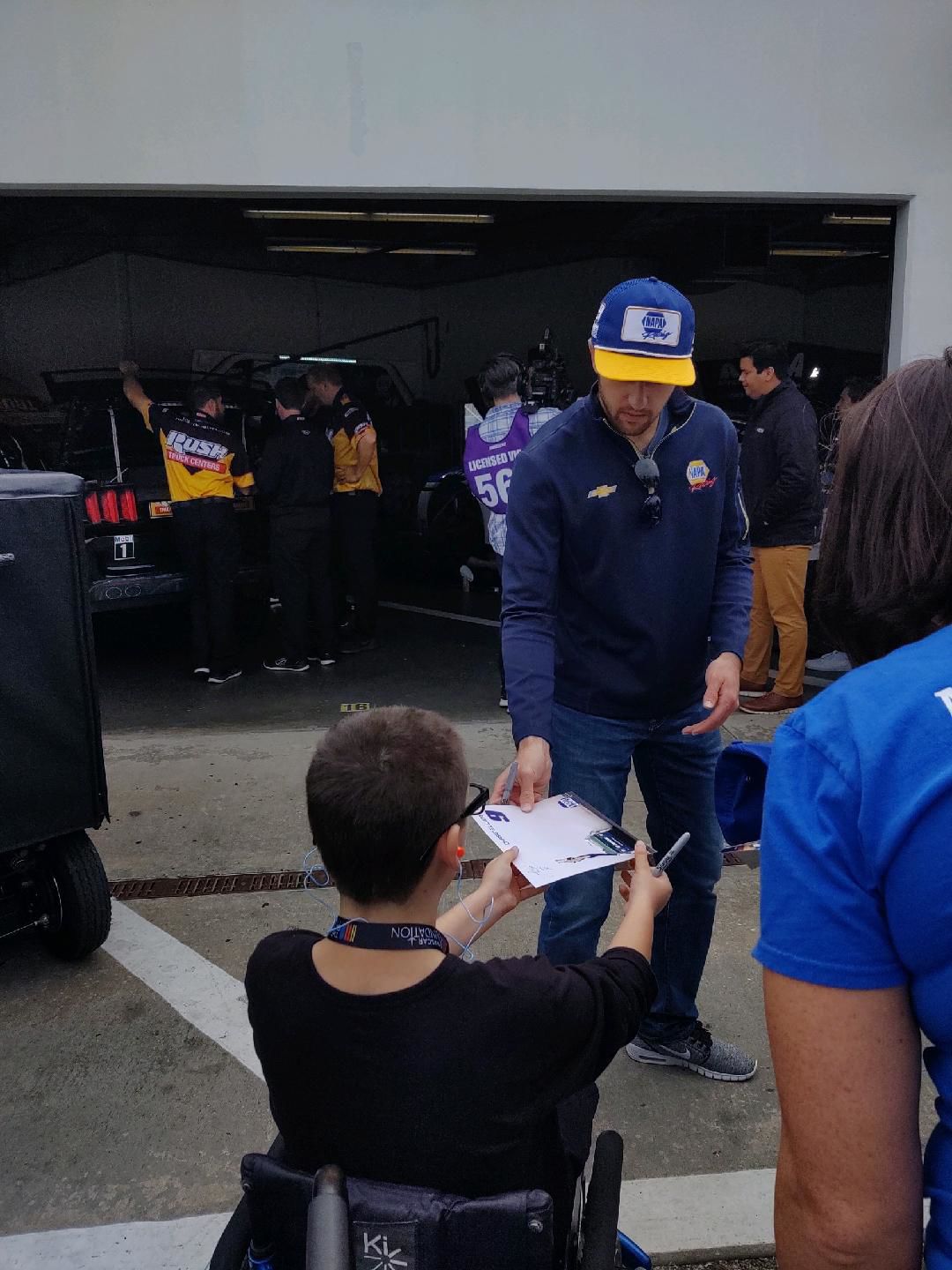 Jeremiah Drake gets an autograph from NASCAR Driver Chase Elliott during his visit to the 2020 Daytona 500.

It would be an experience that Jeremiah Drake won’t forget.

The 11-year-old was ecstatic when his dream of going to the Daytona 500 was going to come true.

“I just started jumping up for joy,” Drake said.

The Make-A-Wish Foundation granted Drake’s wish of attending the most prestigious race on the NASCAR calendar. It was among his four choices, as his other three wishes were taking a trip to Walt Disney World, meeting NFL quarterback Tom Brady or San Francisco Giants catcher Buster Posey.

But of course, the race was on the top of the list.

“It’s always been my dream to go to a NASCAR race,” Drake said.

Drake is a fifth grader at Jackson Elementary School and suffers from Congenital Myasthenic Syndrome. CMS is a type of muscular dystrophy that affects the junction between a person’s nerves and their muscles, causing their muscles to be weak.

He is also involved with the Exceptional Sports for Youth with Needs (ESYN) organization in Selma. According to his father Robert Drake, Jeremiah was in and out of the hospital since he was two months old.

Robert recalled a time when he took Jeremiah to the hospital on Christmas Day when his son was three. Jeremiah was checked out of the hospital 24 days later. He said his son went into respiratory failure and he almost died. Robert added that Jeremiah nearly passed away three times before he was three.

When Jeremiah was three, his genetic doctor at Valley Children’s Hospital recommended him for Make-A-Wish. Eight months ago, Robert said the foundation contacted him and his wife, Stephanie Drake, to conduct an interview with Jeremiah and that’s when the 11-year-old gave the nonprofit organization his top four wishes.

“I tell everyone ‘You buy a star because when you see that star that’s sending a kid to a dream vacation,” Stephanie said.

During his seven-day trip to the event, Jeremiah met some of the drivers from the NASCAR Gander RV & Outdoors Truck Series and gave high-fives to the Daytona racers as they were being introduced. The NASCAR foundation provided Jeremiah and his parents passes to take a garage tour and have access to the infield prior to the race.

One of the top moments of his trip was getting an autograph from Chase Elliott.

One of Jeremiah’s most memorable moments was standing next to the No. 48 Chevrolet Camaro ZL1 1LE, which is driven by his favorite racer Jimmie Johnson.

“That was so awesome,” Jeremiah said.

The 62nd edition of the race was slated to occur on Sunday, Feb. 16, but it was delayed due to rain and it was postponed to the next day. Despite the rainy conditions, Make-A-Wish rebooked the Drakes’ hotel and flights to stay an extra day to fulfill Jeremiah’s dream.

“Once the race got rained out, my husband called our representative in Fresno and she made it work where we could stay that extra day and change our flight,” Stephanie said. “They really try to work with the families to give the kids their wish and their dream vacation.”

Watching NASCAR has been one of Jeremiah’s favorite things to do and he began gaining interest in auto racing since he watched the Disney/Pixar film “Cars,” his favorite movie.

“He really liked Lightning McQueen and that’s how he started liking NASCAR,” Robert said. “He’s watched them all.”

When reflecting on their time in Daytona, Robert and Stephanie enjoyed seeing their son have the time of his life and It was easily their favorite moment of the trip.

“It was great to see how he reacted to everything that was going on,” Robert said. “He was so well taken care of by Make-A-Wish and also the NASCAR foundation.”

“It was just his whole excitement about the whole thing and how happy he was,” Stephanie said.

SELMA — A man was arrested by Selma Police after fleeing the scene of an armed robbery on July 30.

Man arrested after injuring child during argument with girlfriend

Column: See you in the winter

It’s official. We’ll have Friday night lights in January while other high school sports in California will start in December.

SELMA - Football will not be played at the youth level this year in Selma.

Jeremiah Drake gets an autograph from NASCAR Driver Chase Elliott during his visit to the 2020 Daytona 500.