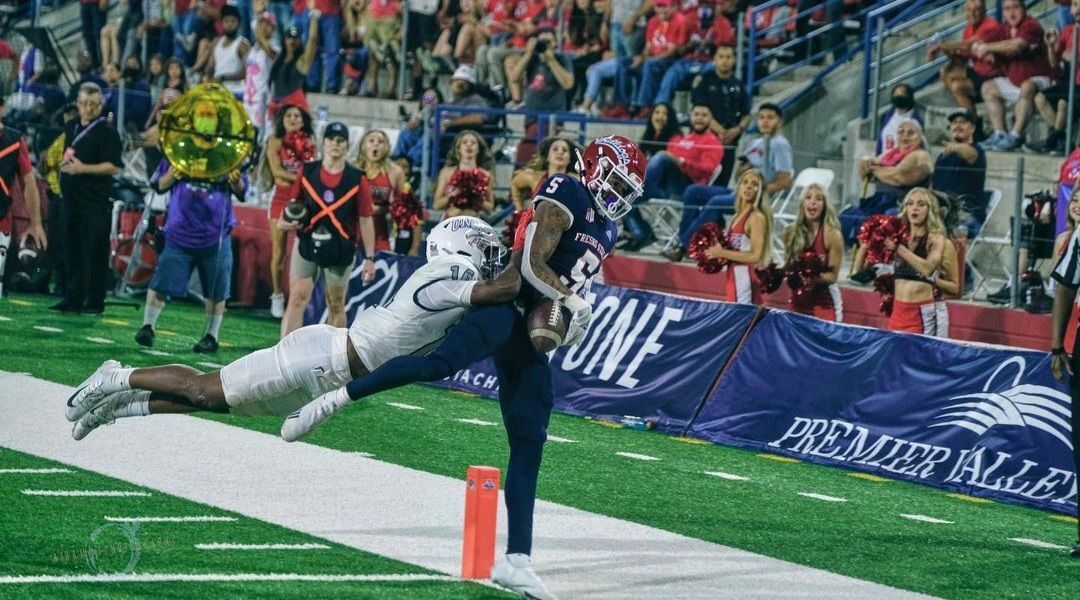 Jalen Cropper had four touchdown catches to help lead the Bulldogs to a 38-30 victory over UNLV on Sept. 24 at Bulldog Stadium. Fresno State is currently 4-1 overall and 1-0 in the Mountain West. 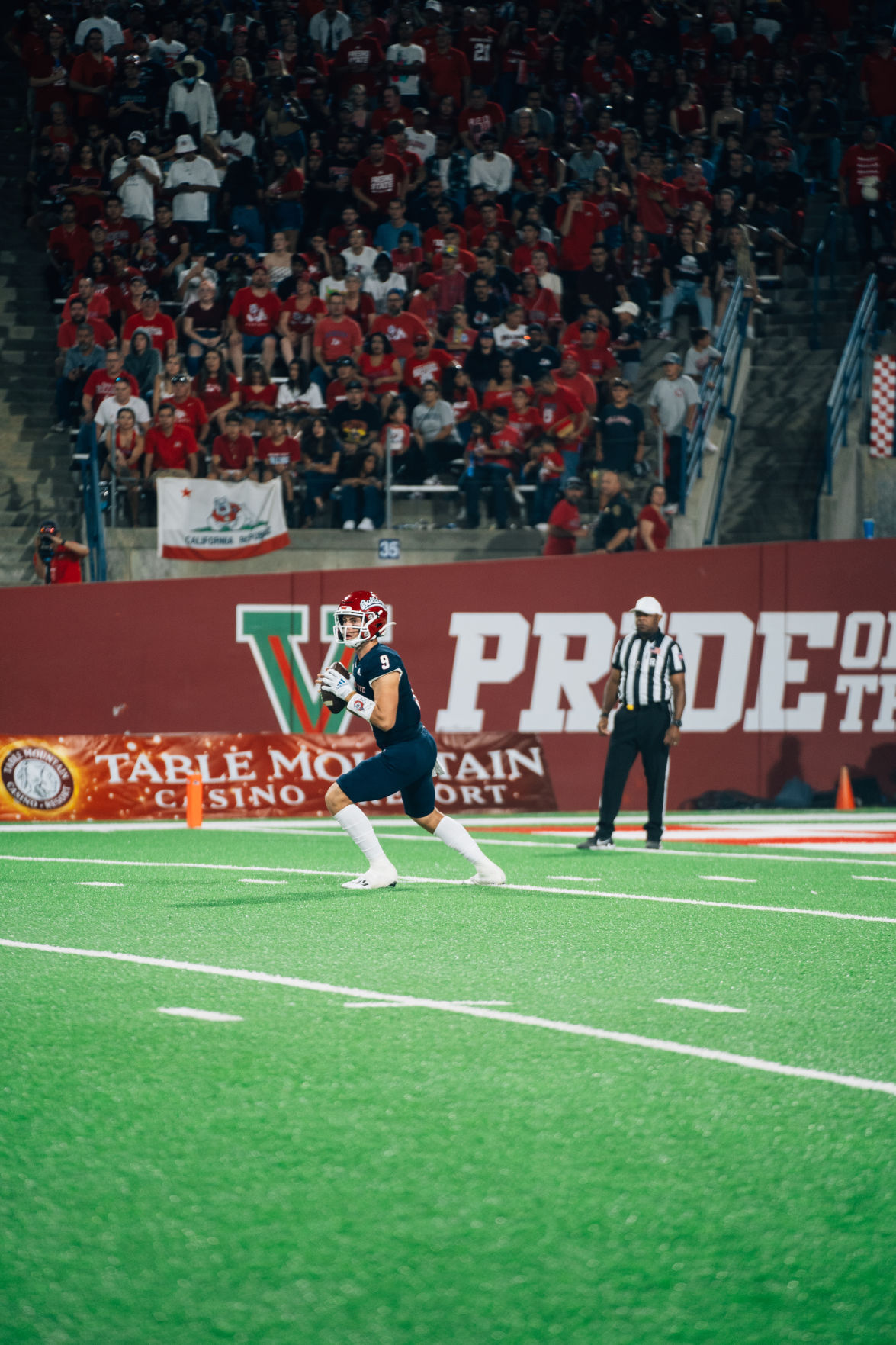 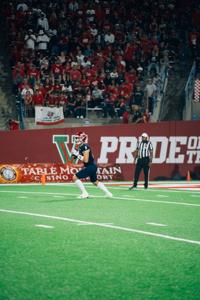 Jalen Cropper had four touchdown catches to help lead the Bulldogs to a 38-30 victory over UNLV on Sept. 24 at Bulldog Stadium. Fresno State is currently 4-1 overall and 1-0 in the Mountain West.

Coming off one of the most memorable wins in program history over UCLA on Sept. 18, the No. 22-ranked Fresno State Bulldogs nearly let the momentum from that win slip away.

The Bulldogs needed a late strip sack by Aaron Mosby, which led to a field goal, and four touchdown receptions from Jalen Cropper to help them beat the UNLV Runnin’ Rebels (0-4, 0-1) 38-30 on Sept. 25 at Bulldog Stadium.

“Find a way, right? That’s what it’s all about. It wasn’t pretty at times, but you have to tip your hat to UNLV as well. There is no question that they are a better team than what their record shows. Their schedule has two top 25 teams earlier and one of the better teams in the FCS that got away from one of those games,” said Kalen DeBoer, Fresno State head coach. “Knew they’d come in swinging and playing hard. They did a nice job with some things, just little adjustments, some things that maybe they hadn’t shown on offense much, if any, especially the screen game and some of those things. There’s no question the guys in that locker room care so much and sometimes they maybe care too much, and they just have to go out there and have fun and play ball. Proud of this team because the way they kept playing until the very end. There are some lessons were going to learn, there’s some things were going to be able to get better at from watching the film but it’s obviously better to do that coming off a win than coming off a loss."

Fresno State moves to 4-1 overall and 1-0 in the Mountain West with the victory. They will travel to play the University of Hawaii on Saturday, Oct. 2.

Mosby said that the close win over UNLV was a learning experience for the team.

"For this game, I'll just say it was a humbling moment for our team, you know. Coming off a big win, you have people pumping you up, your heads in the sky,” Mosby said. “Going into a conference play, everyone wants that title and adversity hit. Like I said, it was great to see our team keep fighting and come out with a victory."

After UNLV raced out to an early 14-0 lead after the first quarter of play, the Bulldogs scored the next nine points to trail 14-9 at halftime. The Bulldogs got a 25-yard field goal from Cesar Silva and then scored on a touchdown pass from Jake Haener to Erik Brooks late in the second quarter.

The Rebels increased the lead to 21-9 after Tyleek Collins scored on an 80-yard touchdown pass on the first play of the third quarter.

Coach DeBoer praised the receiving group for their play in the game.

“Obviously, the touchdown catches were all big ones. He is becoming a complete receiver. He is not just this fast guy that’s running around that you just get the ball in his hands. He’s winning but running good routes and getting just enough separation. Finding a way to pull the ball in in traffic and I thought a lot of our receivers did that,” DeBoer said. “You know Keric made some nice catches on some crossing routes. Josh did as well when we needed it, so they did a nice job securing the ball. There were some hard hits going there. One guy wraps you up and you spin out of one and here comes another guy. We took care of the ball in that way.”

Cropper and Haener have had an amazing connection over the past two games. Cropper has 24 receptions for 149 yards and five touchdowns.

“I just feel like there is a lot of trust between me and Jake on and off the field. I think going through summer, spring ball, and fall camp we had a lot of practices, a lot of time, a lot of chances where we were able to connect on certain plays,” Cropper said on his connection with Haener. “Getting in the film room and studying a lot of the film on opponents this season, and I feel like just everything we do from on and off the field to whatever we do with our relationship. I think that ties into what we do on the field.”

“One thing this team has, when times get tough, we’ll find a way to keep fighting and keep playing,” DeBoer said. “Pretty proud of the way the guys finished out the game.”