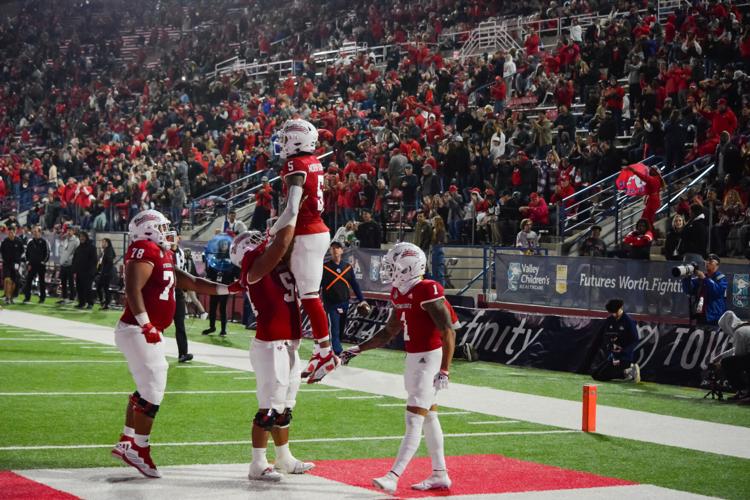 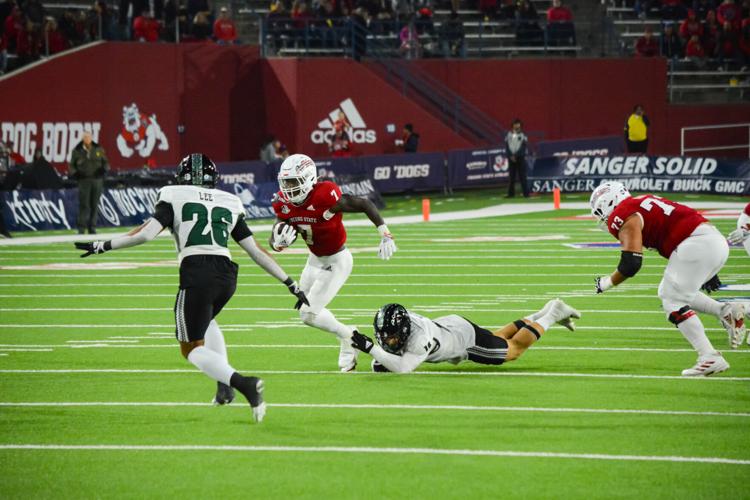 The Bulldogs continued their offensive momentum in the second quarter extending their lead to 24-0.

The Bulldogs continued their offensive momentum in the second quarter extending their lead to 24-0.

It was a dominant performance in all phases of the game for the Fresno State Bulldogs against the Hawaii Warriors on Nov. 5 at Valley Children’s Stadium in Fresno.

The Bulldogs scored the first 55 points of the game led by Jake Haener ,who had 327 yards and four touchdowns passing, that led the Bulldogs to a 55-13 win over the Warriors. The Bulldogs moved to 5-4 overall and 4-1 in the Mountain West. They will travel to play at UNLV on Friday, Nov. 11. The game will be televised on CBSSports Network.

"It was nice to put together a complete team win tonight. I thought that I could have done a better job early on staying calm in the pocket,” Haener said. “I thought I was a little jumpy in the beginning. I'm glad the boys up front did a really good job and gave me the chance to throw it down field. It wasn't a perfect performance, but it was one of the most complete games that we've played as a team all season long."

After a 31-yard field goal from Abraham Montano gave Fresno State a 3-0 lead with 6:54 left in the first quarter, Fresno State extended the lead to 10-0 after Cam Lockridge intercepted a Hawaii pass and returned it 31 yards for a touchdown. Lockridge played for the Warriors the past two seasons before transferring to Fresno State for the 2022 season.

The Hawaii offense scored two late touchdowns to break the shutout. Evan Williams, who had six tackles, said that the loss to Hawaii the past year gave the team an extra boost.

“It really comes down to the game plan and our execution. The guys were locked in, and we had a little extra motivation factor from last year and the year before that,” Williams said. “We made the decision early in the week that we weren't going to allow the third down conversions. It felt good to stop those drives and get them off the field. It also feels good to get those takeaways and just be able to help the team win."

Levelle Bailey had six tackles; Hanford native Tyler Mello had one tackle in the game. Coach Jeff Tedford, Fresno State head coach, said he was proud of how the team competed in the win.

“It was a great team victory; it was something the kids really put a lot of time and energy in over the week. You know, last year it didn’t turn out so well there and so the guys were very motivated this week,” Tedford said. “I thought we went into the game very focused. Really proud of the execution. Wasn’t a perfect game by any means but we got a lot of guys in the game which is great when they work so hard throughout the week on scout teams, to get those guys in was nice.”