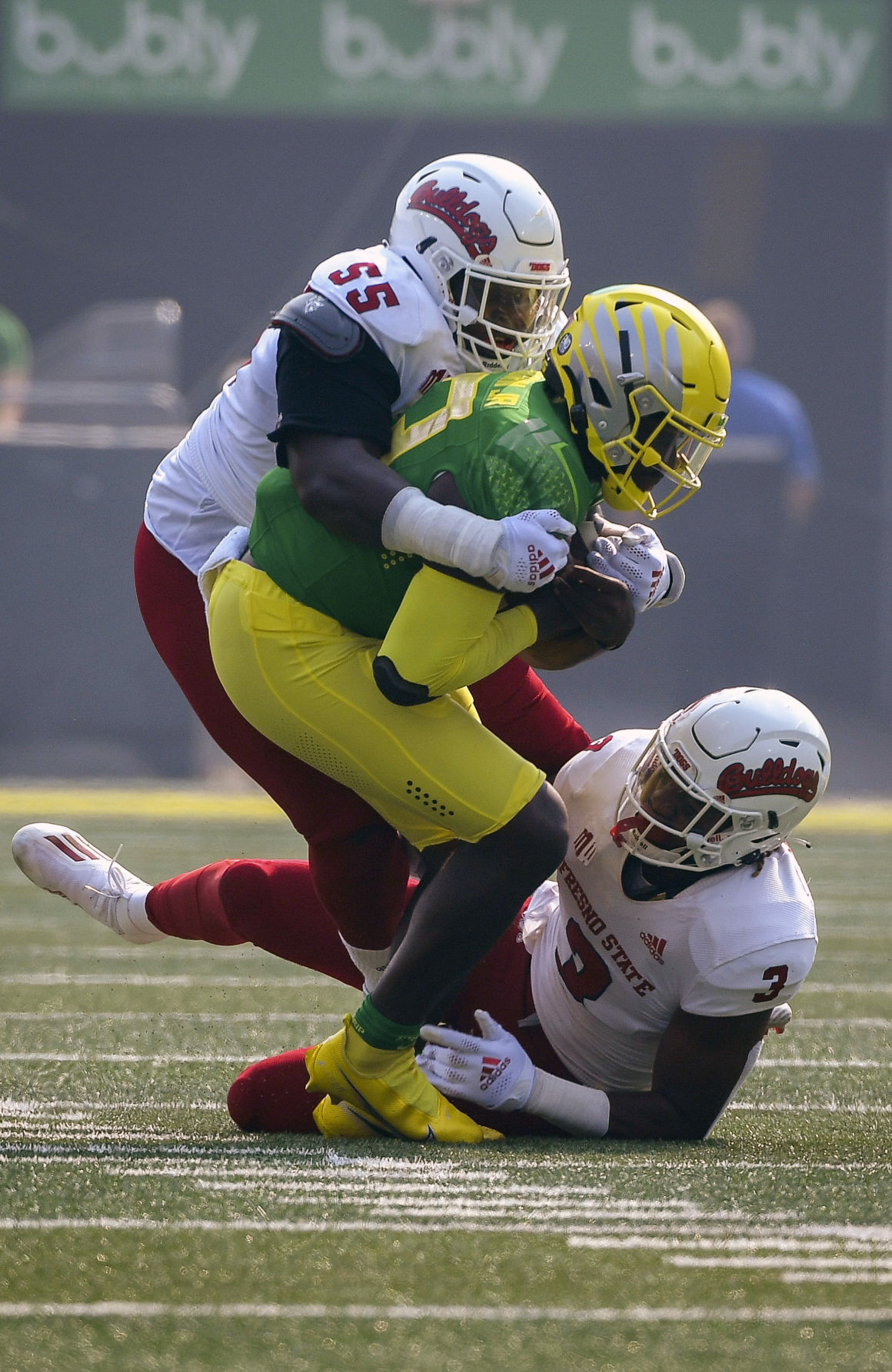 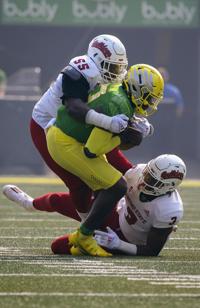 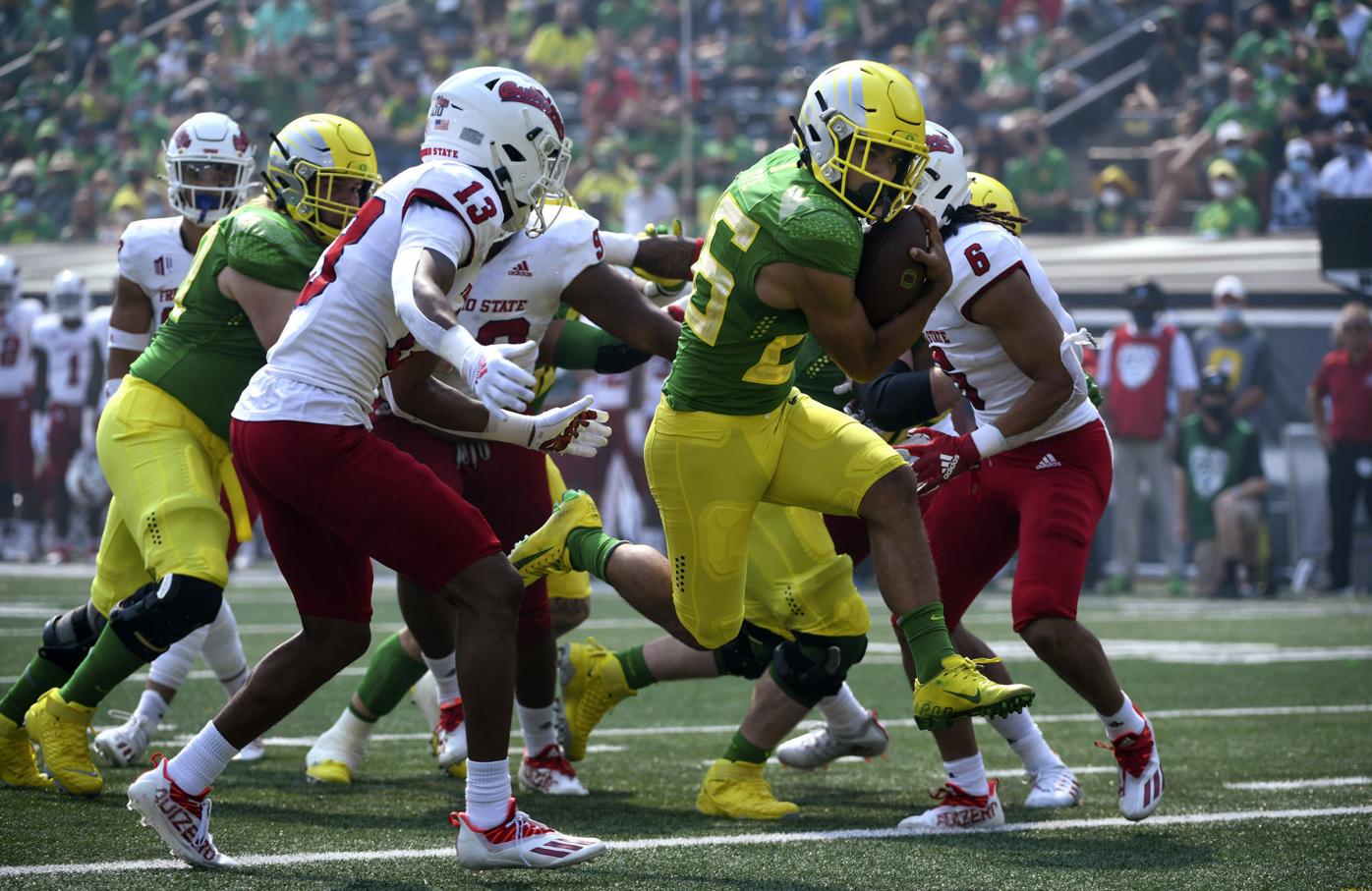 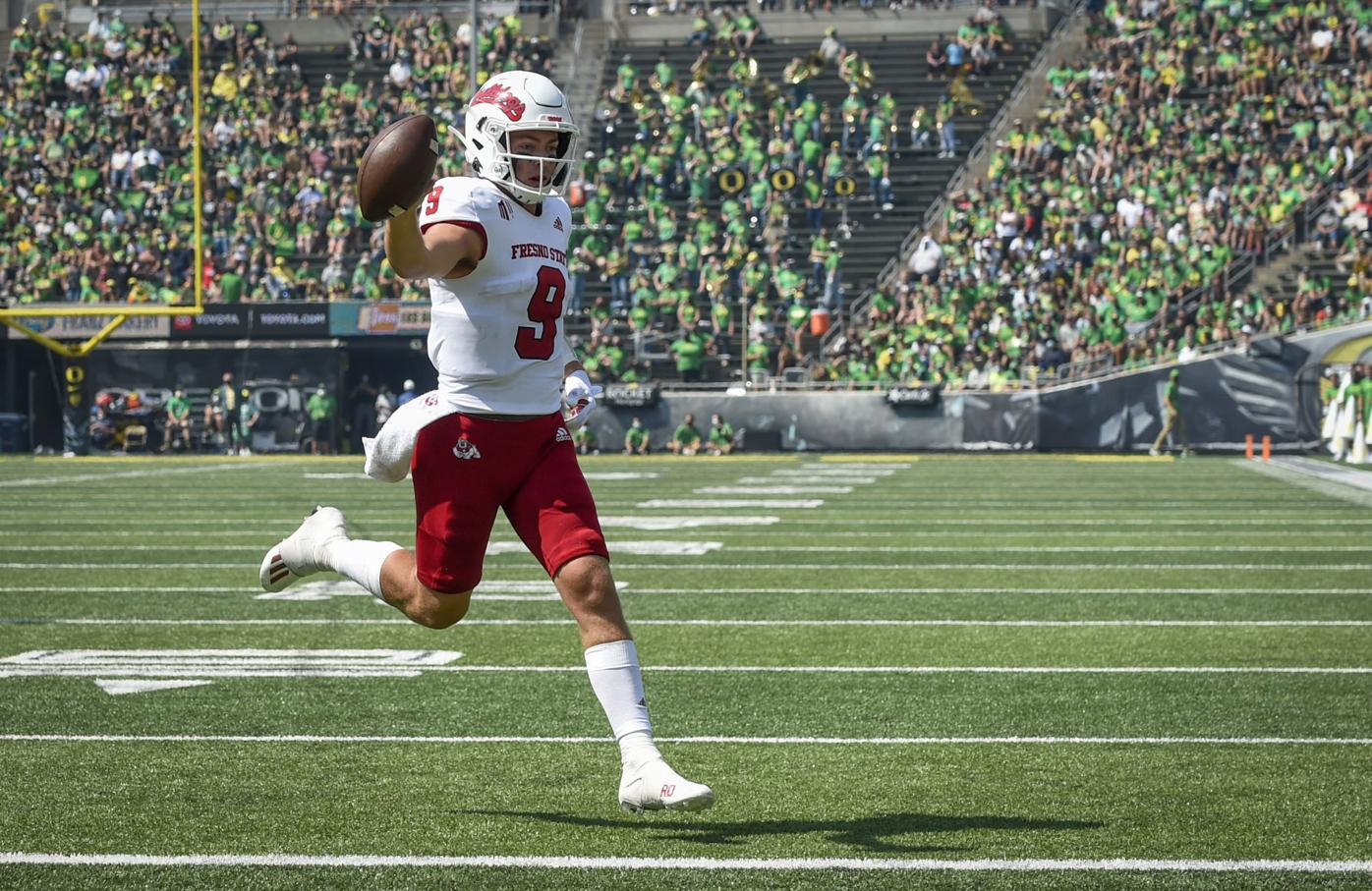 Fresno State quarterback Jake Haener (9) scores during the third quarter of an NCAA college football game against Oregon, Saturday, Sept. 4, 2021, in Eugene, Ore.  For a full story on the game, see Page B2.

Fresno State quarterback Jake Haener (9) scores during the third quarter of an NCAA college football game against Oregon, Saturday, Sept. 4, 2021, in Eugene, Ore.  For a full story on the game, see Page B2.

After falling behind 14-0 following two first quarter fumbles to the No. 11 ranked Oregon Ducks, the Fresno State Bulldogs battled back and gave Oregon all they could handle.

Fresno State held a 24-21 midway through the fourth quarter, before the Ducks scored the final 10 points to escape with a 31-24 victory on Sept. 3 in Eugene, Oregon. Fresno State committed five turnovers in the game which led to 17 Oregon points and was the difference in the game.

“I think the biggest thing, just being in the locker room just now, is we’ve got a team that has each other’s back, a team that feels that they can play with anyone and a team that right now is hurting because they know they had a chance and know they could have had that one,” coach Kalen DeBoer said afterward.

Oregon got on the board first on a two-yard touchdown run by CJ Verdell. The touchdown was set up when Oregon’s Kayvon Thibodeaux forced a fumble when he sacked Fresno State quarterback Jake Haener.

The Bulldogs fumbled on the first play of the ensuing possession which gave the Ducks the ball at the Bulldogs’ 27-yard line. They converted the turnover into points when Travis Dye ran in a touchdown from four yards away. This gave the Ducks a 14-0 lead in the first quarter.

Fresno State cut the Oregon lead to 14-3 after a 33-yard field goal from Abraham Montano early in the second quarter. They added another field goal on their ensuing possession to pull within 14-6 with 3:31 left in the first half.

Oregon scored on the next possession when quarterback Anthony Brown connected with Johnny Johnson III for a 32-yard touchdown. This gave Oregon the 21-6 lead.

The Bulldogs scored next when Haener found Jalen Cropper for a 17-yard touchdown. This capped a 10-play 75-yard drive in just over one minute. Fresno State trailed 21-13 at halftime.

Haener finished the game 30-for-43 for 298 yards and one touchdown pass.

The momentum continued for the Bulldog during their first possession of the third quarter, when Haener scored on a two-yard touchdown run. Haener then found tight end Juan Rodriguez on a two-point conversion attempt to tie the game at 21.

After the Fresno State defense forced an Oregon fumble late in the third quarter, the Bulldogs had the ball at Oregon’s 22-yard line to start the fourth quarter. This led to a 22-yard field goal from Montano that gave the Bulldogs a 24-21 lead with 13:03 left in the game.

Oregon tied the game at 24 with a field goal midway through the fourth quarter after recovering a Fresno State fumble.

The Ducks took a 31-24 lead when Brown scored on a 30-yard touchdown run on a fourth down with 2:57 left in the game. The Bulldogs had one final chance but were unable to score.

“We just didn’t execute,” linebacker Tyson Maeva said. “Our eyes were wrong and when guys were there to make the play they just didn’t make it happen, missed tackles and what not. But there should have been a lot more guys there in the first place, including me.”

Fresno State falls to 1-1 on the season and will host Cal Poly on Saturday, Sept. 11 at Bulldog Stadium.