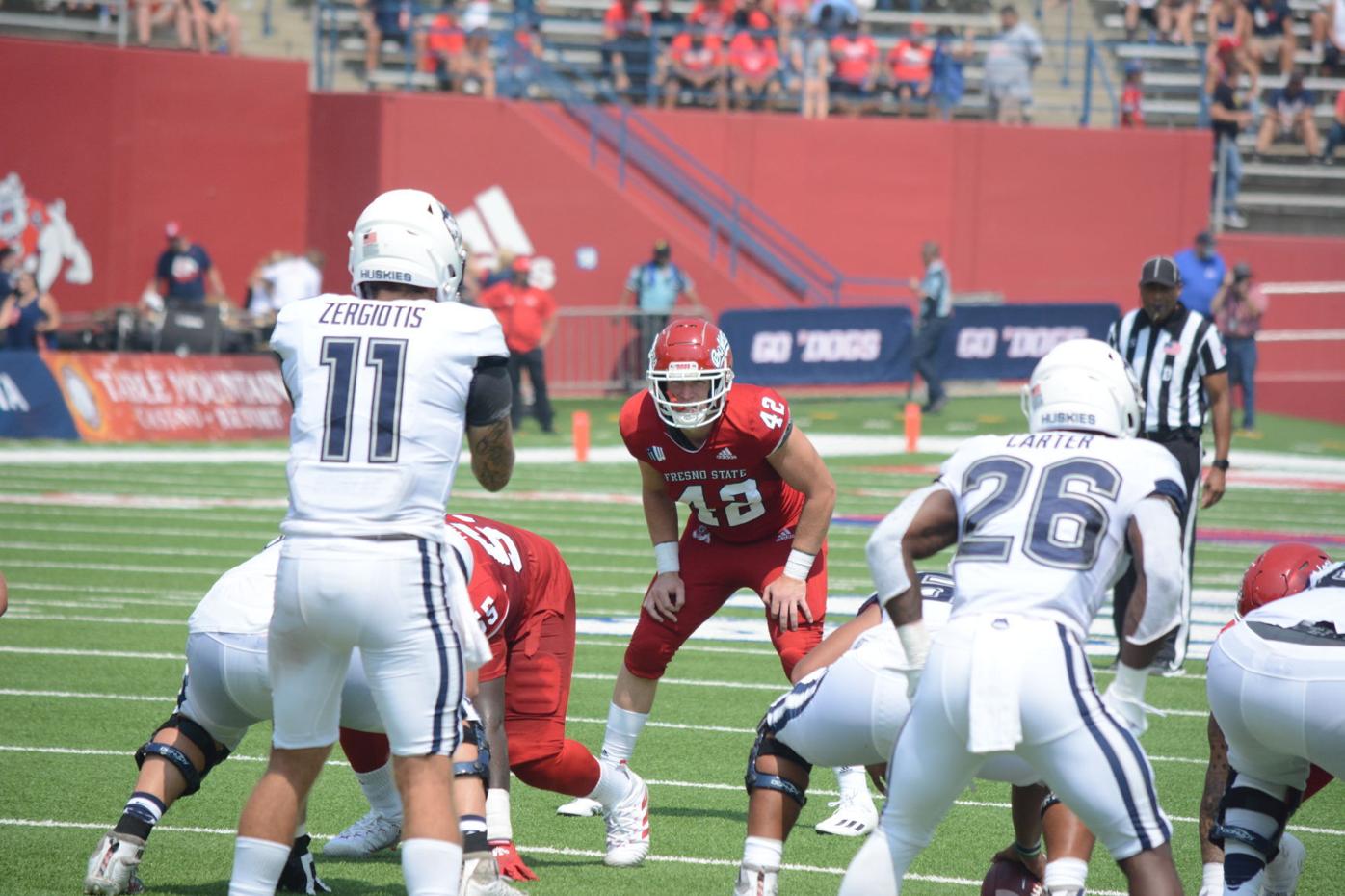 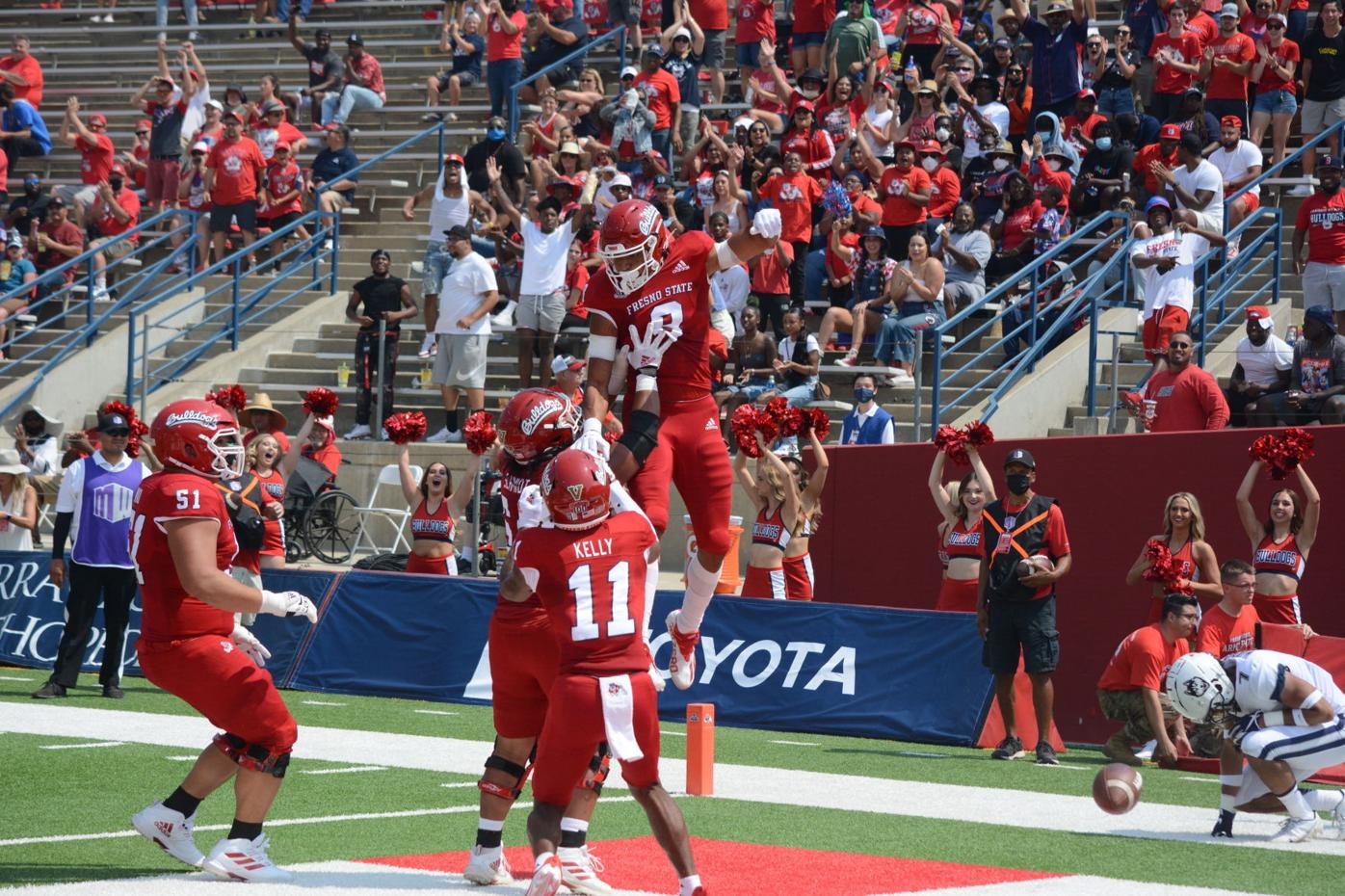 Ty Jones, Fresno State receiver, celebrates with his teammates after scoring a touchdown.
1 of 2

Ty Jones, Fresno State receiver, celebrates with his teammates after scoring a touchdown.

On a day where temperature reached triple-digits, the Fresno State Bulldogs offense scorched the Uconn Huskies to earn a 45-0 victory in the season-opener on Aug. 28 inside Bulldog Stadium.

The Bulldogs started the game slow holding a 7-0 lead after one quarter of play, before the offense exploded in the second quarter scoring 28 points to take a 31-0 lead into halftime — from which they never looked back.

“Yeah, just it’s a team effort all around, you know it’s not perfect and I don’t know If I’ve ever seen a perfect game played. But there was a lot of just great things that I know I can see we’re better at,” said Kalen DeBoer, Fresno State head coach. “Of course, there’s things were going to need to continue to improve. Seeing the defense use the energy coming out of the locker room to start the game, and feeding off of that, I know we were probably a little over the top but excited coming down the ramp and in the locker room beforehand. The defense used that and I think that maybe it took a little bit of the offense to kind of settle in and just kind of get our bearings right and get back to doing what we normally do and then just the special teams, Cesar, I think just you know pounding the ball in the endzone almost every time on kick off so that’s a big deal you know we haven’t had that and he continued to do that both directions.”

Aaron Mosby got Fresno State on the board late in the first quarter when he sacked UConn quarterback Jac Zergiotis, causing him to fumble the ball. Mosby picked it up and ran in to the endzone for a 31-yard touchdown. The defense for Fresno State suffocated the UConn offense and shut them out.

“The drills we do, you know, the trip sets, picking up the fumble — that was probably the hardest part and then really just returning it for a touchdown was probably the easiest part,” Mosby said. “Our defense progressed big time from last year to this year really just the front seven. To build a champion team you have to start from the inside out, so I feel like our defense came together. Our front seven played very well. I think we held them till 34 rushing yards I believe so that was a huge accomplishment for this defense and a huge step forward for the next game.”

Coach DeBoer was happy to see Mosby, who switched positions in the offseason, make the play.

"There is a whole team in there I am proud of because of what we’ve gone through over the last year and a half and maybe one of the most impressive and guys I’m excited about is Aaron Mosby. To have him make that play just moving from position to position to position over the last three to four years from safety to linebacker to DE, and now thriving at that position and starting there today,” DeBoer said. “It’s a super special thing and being a hometown guy, I hope the fans, I think the fans were all understanding what had just happened with the big play he made. I couldn’t have been happier for him and I was fired up for him, I think he’s only, I think he’s still, he’s got a lot more that he will improve on especially after he sits and studies the live game film so he’ll continue to get better as well."

“Yeah, it was just a play that we run that gets me out in space and gets me running off some backers. Jake threw a great ball to keep me away from that safety, and then it’s just break a tackle and get to the end zone,” Rivers said. “So, it was just an overwhelming feeling, great accomplishment, and none of this could be done without my teammates. So, all the props and all the glory go to them.”

On the Bulldogs next offensive possession, Haener threw his third touchdown pass of the game hitting receiver Jalen Cropper for an 86-yard score. This gave Fresno State a 28-0 lead. Cesar Silva hit a 24-yard field goal as time expired in the first half to put the Bulldogs ahead 31-0.

"Offensively obviously you just said it, you know there wasn’t the rhythm I think that was probably the biggest thing, you know you’re just trying to get into a rhythm, you know we got the one first down with Ronnie, and then couldn’t get anything more than that, so it’s that rhythm. Defensively we got off to an extremely fast start and so you just got to you know and that what you’ve got to do.” DeBoer said. “I hear Ronnie talking about you guys got to have your back or jake talking about each side of the ball has to have their back and so you know I’ve brought it up many times, two years ago when we played these guys and I was at Indiana, it was 10-3 late in the second quarter, and the same kind of thing happened so you know the better teams just continue to wear on the opponent and that’s what we did today so you know we do emphasize starting fast and we need to do a better job on the offensive side next week."

Fresno State added two more touchdowns in the second half on an eight-yard run by Jordan Mims and a one-yard touchdown pass from Logan Fife to Raymond Pauwels.

Hanford native Tyler Mello, who played on special teams, and was a backup linebacker in the game ended the game with three total tackles and joined a teammate with a sack. Elijah Gates, Tyson Maeva and Justin Houston led the Bulldogs each recording four tackles.

The Bulldogs now travel to face the No. 12 team ranked team in the nation the Oregon Ducks on Saturday, Sept. 4 in Eugene, Oregon. It will be the season-opener for the Ducks.

“I think it’ll be a great challenge. We’ll be ready and ready to roll,” Haener said. “We will be confident. We know that we can play and play at a high level.”