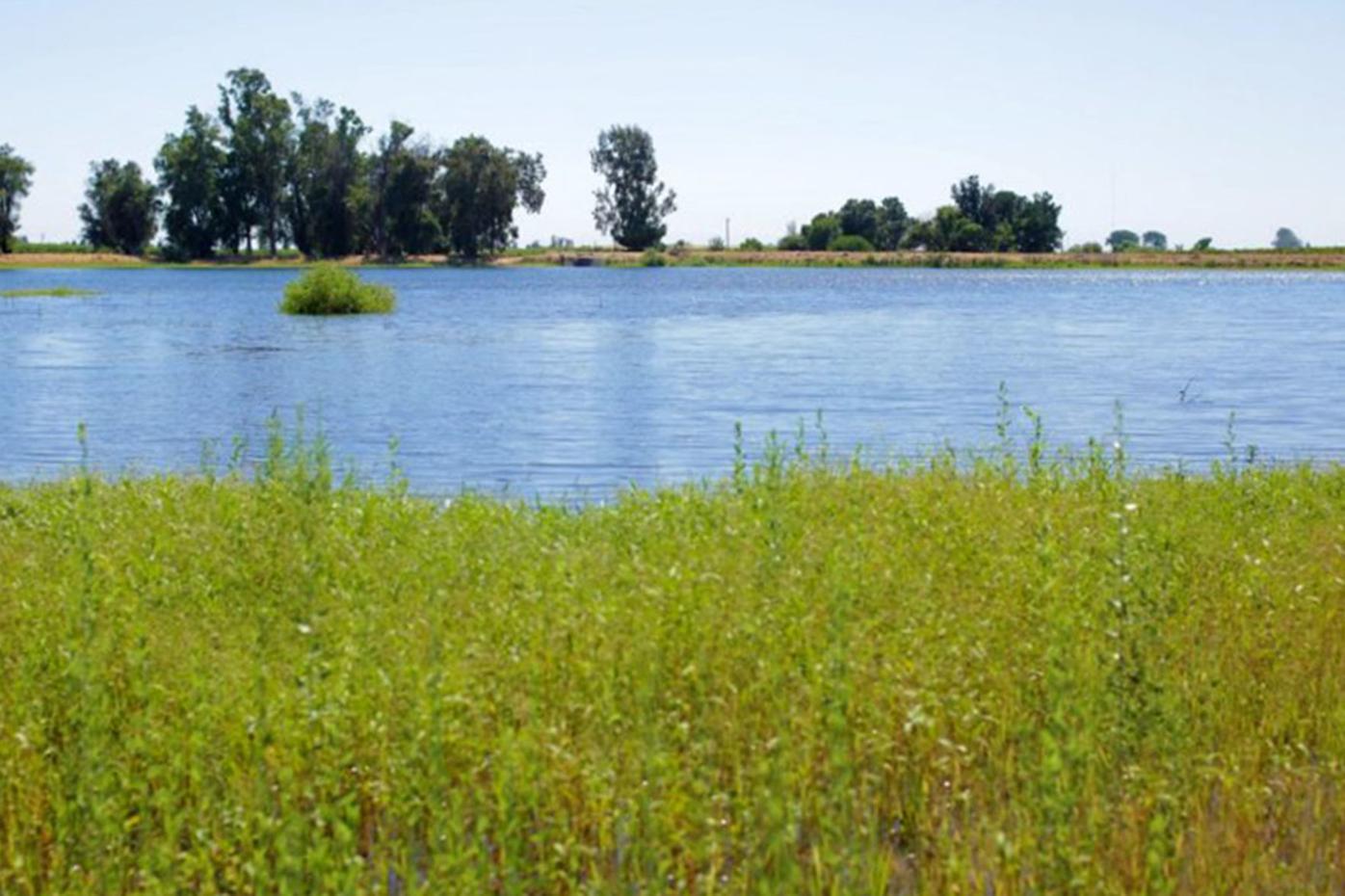 A Consolidated Irrigation District photograph shows one groundwater basin they manage that must be refilled, or recharged, in order to maintain aquifer health and stability. The process is both passive, as when rain water percolates, and active, as in the case of man-made recharge basins. CID manages the natural percolation or sinking of water back into a groundwater basin through a number of recharge basins. CID Manager Phil Desatoff is also the manager of the Central Kings Groundwater Sustainability Agency tasked with meeting state laws to replenish underground water supplies, among other requirements. 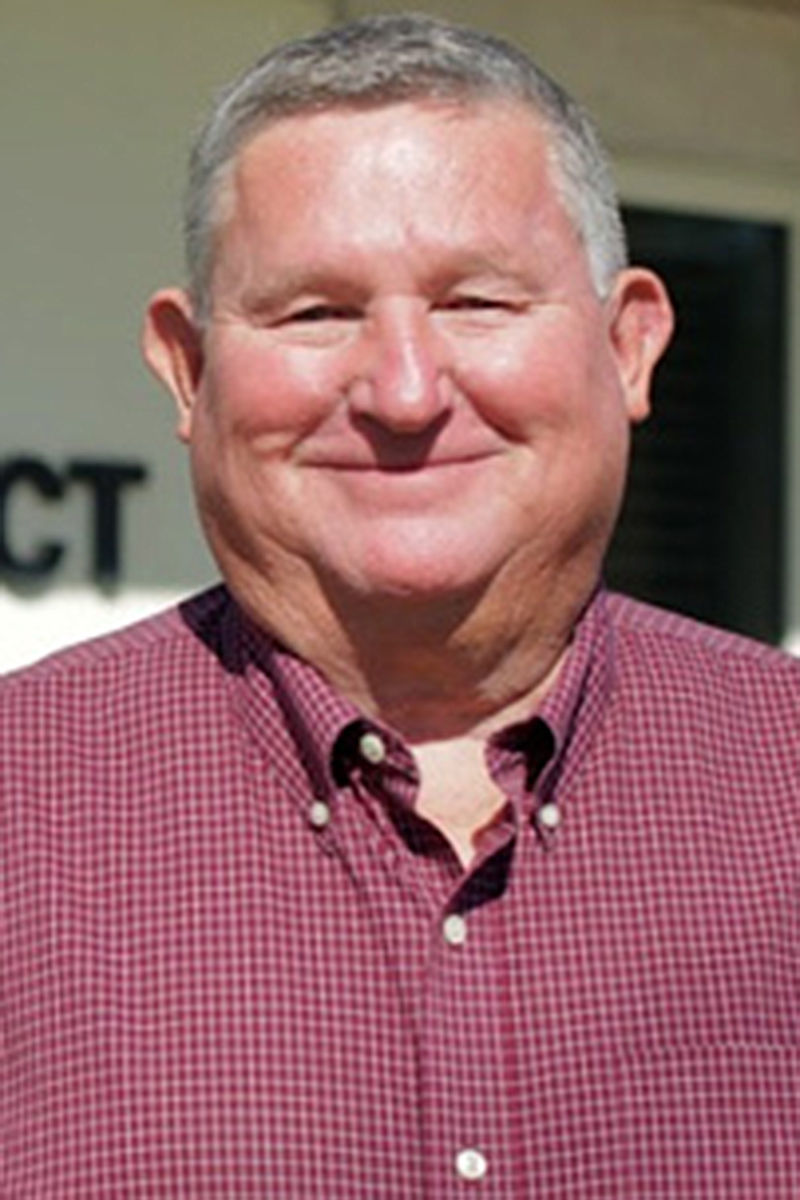 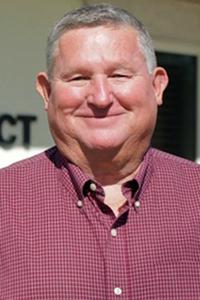 SELMA – In order to keep up with the State’s underground water recharge laws, sooner or later, local water rates will likely need to increase.

That was the message local water management officials gave in a joint presentation at the Oct. 21 Selma City Council.

California Water Service’s local Manager Steve Johnson and Consolidated Irrigation District General Manager Phil Desatoff both shared background information, gave an update on the local plan to meet the new requirements and how the public can learn more and weigh in on the matter.

Johnson said he’s often asked about local ground water levels and said when the drought started in 2013, the levels were static.

On Sept. 16, 2014, then Governor Jerry Brown signed into law a three-bill legislative package that is collectively known as the Sustainable Groundwater Management Act (SGMA).

Desatoff said that in 2006, CID went to all the cities it serviced and asked for help in recharging underground water supplies as the communities were growing. They entered into agreements with Kingsburg in 2010 and Selma in 2012.

Under the City’s existing agreement with the agency, Selma pays $130 per net acre foot of water pumped. The City does get credit for what is returned into the wastewater treatment plant.

“At least a portion of it,” he said. Of that $130, $100 goes into a fund to build recharge basins and $30 goes to the Consolidated Irrigation District.

“We’ve been ramping that up since that $130 is not paying it right now. We’re going to get there after eight years. You’re in the fifth year, so it will get there by the eight years up to that full amount.”

Seven GSAs have formed in the Kings Basin and they’ll each have their own plans as to how they’ll recharge their own underwater supplies. They have to submit those plans to the state by January 2020 and coordinate with other area GSA groups.

“We’re close to having that coordination agreement done. We all have our [plans] out now for public review,” he added. Look for those plans at the Central Kings Groundwater Sustainability Agency’s or Consolidated Irrigation District’s websites.

Desatoff said CID has already been recharging groundwater for 100 years and has been able to return about 50,000 feet of water each year and during wet years, even more.

“Our GSP is out for public review. Our board’s going to adopt it at its Dec. 11 board meeting. [Then] we’re going to submit it to the state by Jan. 31. Once it goes to the state, you can still comment on it through the state’s process.”

Desatoff said the plan is to capture flood water and return it to the underground. He estimates the amount that’s needed is cover the overdraft about 13,000 acre feet.

“That’s nothing compared to some of the other folks. With a few more acres of pond, we’ll have that covered. Our plan says we’re going to put 2,000 acres of recharge basins in ourselves. We’re asking the other four cities in the South Kings GSA to do offset for their own groundwater pumping. That’s what our plan says on water quantity.”

Other issues they must meet are related to sea water intrusion, which is not an issue locally, and land subsidence where the earth gradually settles or sinks in part because of subsurface water removal.

“We don’t have that in this area, but it’s being monitored. We see practically nothing and it’s going to continue to be monitored,” Desatoff said of the subsidence issue.

They will focus on water quality issues by following the lead of other agencies.

“There’s a host of agencies and regulations dealing with water quality. We’re going to follow what they’re doing. If at some point it seems like we have to do something, then we’ll step in. Right now, we’re going to rely on them.”

Desatoff said that the previous driest period on the Kings River was during the Dust Bowl of 1928 through 1932.

“It was really bad but now we’ve exceeded that,” he said with 2015 being one of the driest years on record where the runoff was 20 percent of normal. Then, in 2017 there was an excess flood of water so the district recharged 408,000 acre feet underground in one year.

“That’s almost half of Pine Flat,” he said. Desatoff reported that when the District releases water to soak in as it runs through its system of canals, 1,900 acre feet are taken in each day.

“We put 408,000 acre feet of water in the underground. So when our system is running with no demand, 950 [cubic feet per second] goes into our ponds and soaks in through our canal bottoms.”

For 2017, the District started putting water through its canals on Jan. 3 and filling up its ponding basins. They kept them full through September while also delivering water to its farmers. This enabled their farmers to turn off pumps for underground water, he said.

Since March of this year, they’ve continued releasing water and will continue to bring water through until mid-November.

“We’ll see if it starts to rain, then we’ll shut off. If not, we might still run some water. We’re doing our part.”

Desatoff cautioned that under the SGMA requirements, they have to balance how much is put back in with how much water is pumped out and they have to provide milestones to the State to show progress.

“We have to show some improvement, or some success, in our effort to get sustainable. Under our existing cooperative, the cities weren’t quite getting there with the amount of money we’re collecting. In some point, in the not too distant future, we’ll come back and say we need to cough up some more bucks, or we need to ramp up the effort. But we’ll see. Right now, I’m giving a potential forewarning as something to think about for the future.”

He also warned that more laws may be produced requiring other water controls.

“Who knows what Sacramento is going to produce with other new regulations? They just love doing that and for no other reason than just to make us squirm down here, I think. We’re faced with that.”

He described the City’s relationship with CID and CKGS Agency as “still solid. Under our GSP, you’re going to be covered. We just have to work together and keep going.”

Mayor Scott Robertson said he’d been hearing that rates would likely increase as a result of the implementation of these SGMAs but was optimistic it would be handled smoothly when the time comes.

“It sounds like, from what you’re saying tonight, that we’re pretty much covered under that co-op agreement with CID, so that should smooth out any potential of rate [increases].”

Councilman Jim Avalos said he like to see a more proactive approach between the CID and cities they service in lobbying State legislators to ease water restrictions and “bring in more water for the Valley, for the farmers to develop water retention ponds for the future.”

Desatoff added that it costs an estimated $50,000 per acre to purchase and construct water recharge basins. He encouraged City leaders to consider purchasing land to do so sooner than later and where property may be cheaper.

“I don’t care where you put it, as long as you guys are going to do recharge or work with us to put recharge somewhere. But do the math. At some point in the not-too-distant future, we’re going to go back and do a hard analysis and say, ‘are we getting there with the amount of money we’re collecting now?’”