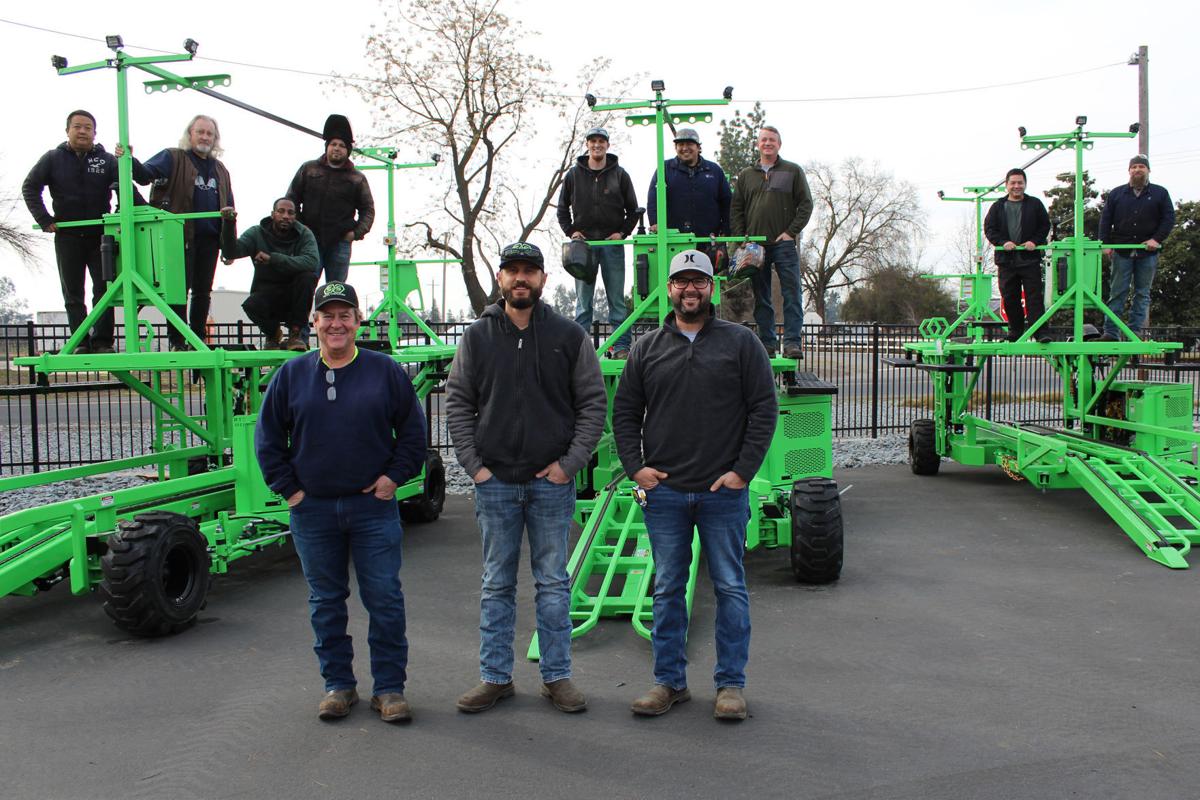 S&S Metal Fabrication’s Bravo1 was selected as one of World Ag Expo Top-10 New Products this year. The Kingsburg company is owned by father and son, Scott and Denver Silva, and in-law, Blake Dodd. They just moved into their new location this past year and this was the first year they’d entered a product in the Ag Expo. 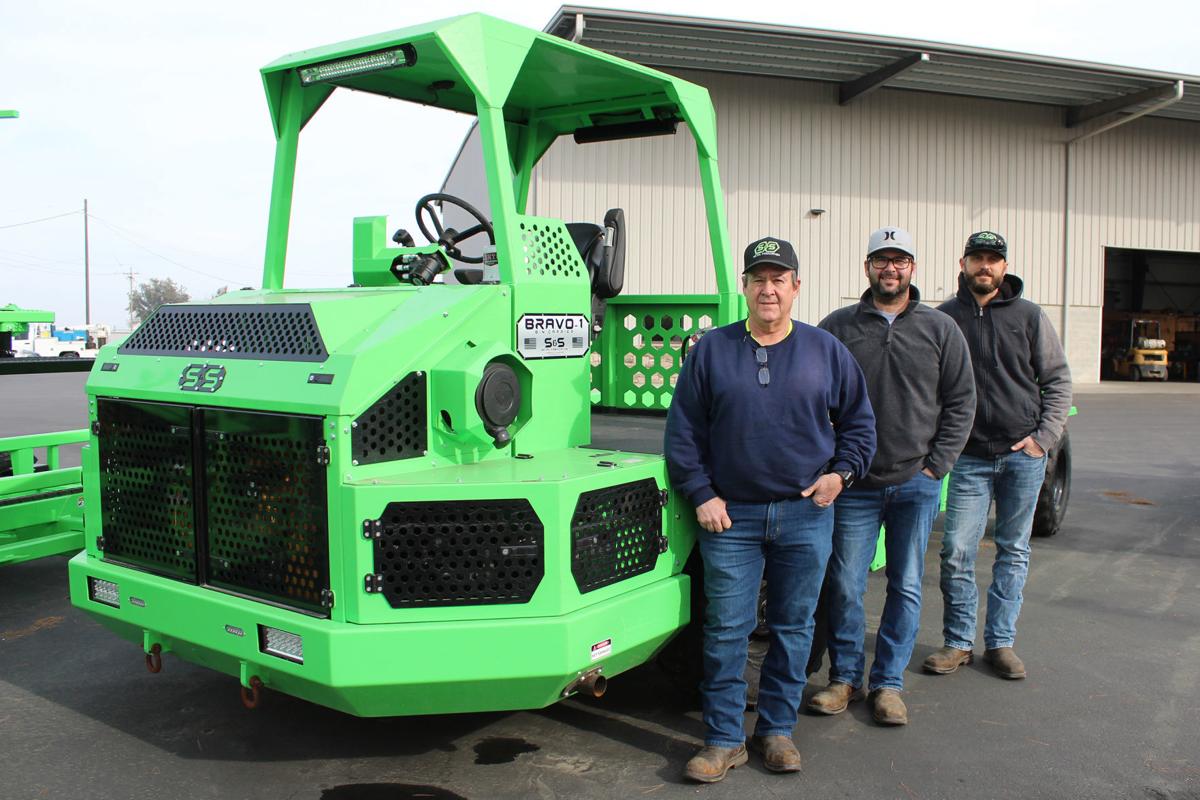 Scott Silva, in front, is pictured with his son, Denver Silva, and son-in-law, Blake Dodd, in front of the Bravo1 fruit bin carrier that earned a spot as one of the World Ag Expo Top-10 New Products this year.

KINGSBURG – This year’s 2020 World Ag Expo will mark several firsts for one local business, S&S Metal Fabrication. It’s not only the first time they’ll be showing their ag-related machinery at the international farm show, but it’s also the first time one of their products was named a World Ag Expo Top-10 New Product.

Having accomplished this within their first year of moving into their new location south of Kingsburg on Road 8 just makes the accomplishment that much more memorable.

S&S Metal Fabrication is headed up by a trio of men: Scott Silva, his son, Denver Silva, and his son-in-law, Blake Dodd. The father and son started out in 2003 and were later joined by Dodd.

“This is our first appearance in Tulare,” Dodd said. “Last year we didn’t go, so for a first-time vendor to also have the Top 10 is pretty good. That doesn’t happen all the time.”

When they first started, they built parts for dairy and packing shed equipment. As they grew, they moved into their new location in 2018 just south of Kingsburg at 38444 Road 8.

As you drive by, you can’t help but notice the lime green farm equipment. The men say other colors are already associated with other well-known ag companies, so they decided to pick a color that would catch your eye.

“Every other color out there, some other manufacturer is already doing,” Denver Silva said. “We wanted to be different.”

They started out making feed mixer knives for dairies and the cattle industry, conveyor rollers, custom ornamental iron gates and stairs. Then, they only had two employees and were at a much smaller shop on Sixth Avenue.

Denver Silva was studying business administration in college and contemplating a career in real estate when he realized he needed to make a decision.

“We focused on S&S and just started going out and meeting new customers and trying to fill a void wherever there was one. We started growing more in the construction side, with structural steel,” he said.

Scott Silva, retiring after 32 years as a police officer, could also now focus on growing the business. When his daughter Jennifer married Blake, his son-in-law brought his life-long ag manufacturing skills to the venture.

Dodd grew up on a ranch and “was always working on some kind of ag equipment with my father.” He then worked at Kingsburg Cultivator for 15 years. “I started at the bottom and worked my way up. I got into the design side and Scott and Denver had an opportunity presented and we merged and came with all this stuff out here,” Dodd said. “We put our twist on it in the ag market.”

Dodd said after years of manufacturing equipment manually “from start to finish, the hard, old-school way,” he now has the advantage of designing with computers to create products.

With their welding contractor’s license secured, they started getting input from dairymen and growers and put their innovative minds to work.

“With the Alpha, the farmers came to us with some ideas,” Scott Silva said. “We kicked it around and talked it over with Blake who’s more into the manufacturing side of it. He has more of the hydraulic experience. We thought it was feasible to do and took the plunge. We were able to go from concept to machines in the field within a year, which is almost unheard of.”

They were still moving into their current location and yet were still able to build 100 pieces of equipment that year, Denver Silva said.

It’s their hydraulic, self-propelled fruit bin carrier - the Bravo1 - that caught the eye of World Ag Expo’s experts. This piece of equipment works with the other products they’ve created, the Alpha1 - a platform harvester - and the Foxtrot bin trailer.

The Bravo1 allows fruit bins to be handled more safely and efficiently while minimizing damage to delicate fruit being harvested. Its seat hydraulically rotates 180 degrees, thus its operator can drive in both directions and remain facing forward at all times. This reduces the risk of injury to the machine or others. It has four-wheel steering and four-wheel drive axles to move in and out of tight rows of crops and air-ride suspension for smooth travel. As it loads and unloads fruit, the rear axle retracts and the frame lowers so bins or pallets can be picked up at a lower angle.

The innovators had already come up with a picking platform that eliminates the need for farm workers to waste time moving ladders from tree to tree. Instead, workers ride atop their Alpha1 and spend less time climbing ladders with heavy loads of fruit, and more time picking.

Their Fox trot hydraulic trailer then moves bin out of the field quickly without bruising the fruit.

If you don’t get out to the World Ag Expo, locals may have seen their equipment in this year’s Santa Lucia parade where the Alpha and Bravo where it was decorated with lights, presents and kids.

Scott Silva said they’re always looking to be innovative and will also continue to partner with local schools and junior colleges to give input on trades skills the next generation needs.

Denver encourages students to learn a trade on top of formal training and “you’ll be busy the rest of your life. Learn a trade like being a plumber and go become a computer technician. If that goes away, people are always going to need plumbers so you’ll always stay busy working. And there are life skills you learn that never go away. The self-satisfaction of building something with your hands is huge.”

As far as the ag industry is concerned, they’re also hoping residents become more aware of food production and legislation that affects agriculture.

“We’ve always got to innovate. Farming is in danger of a lot of people losing their business,” Scott Silva said. “A lot of smaller farmers are unable to compete because of labor now. Our goal is to take some of that away and make it more efficient.”

They have new products in mind they want to develop and will be looking at technology and innovations on hand at the World Ag Expo themselves to see how they can incorporate emerging advances into their own products.

“When you go in a grocery store, half the food in there is from South America or overseas. There are a lot of problems that go with that, plus we’re dependent on other countries. Ag is dwindling in the United States. Once you lose the land to development, that’s land that’s lost forever.”

S&S Metal Fabrication will be at space #10 on P Street. See the online map at https://www.worldagexpo.com/show-grounds-map-printable-

SELMA – Joseph Gomez has been named as Selma’ new police chief, according to a press release issued by the City of Selma.

SELMA – At a special meeting at 11 a.m. Feb. 24, Selma City Council unanimously voted to approve a contract for its new police chief.

SELMA – Selma Unified School District officials say in order to balance the budget next year, at least $3 million in cuts are needed immediate…

KINGSBURG - It didn’t take long for Kingsburg to adjust to a new division.

S&S Metal Fabrication’s Bravo1 was selected as one of World Ag Expo Top-10 New Products this year. The Kingsburg company is owned by father and son, Scott and Denver Silva, and in-law, Blake Dodd. They just moved into their new location this past year and this was the first year they’d entered a product in the Ag Expo.

Scott Silva, in front, is pictured with his son, Denver Silva, and son-in-law, Blake Dodd, in front of the Bravo1 fruit bin carrier that earned a spot as one of the World Ag Expo Top-10 New Products this year.