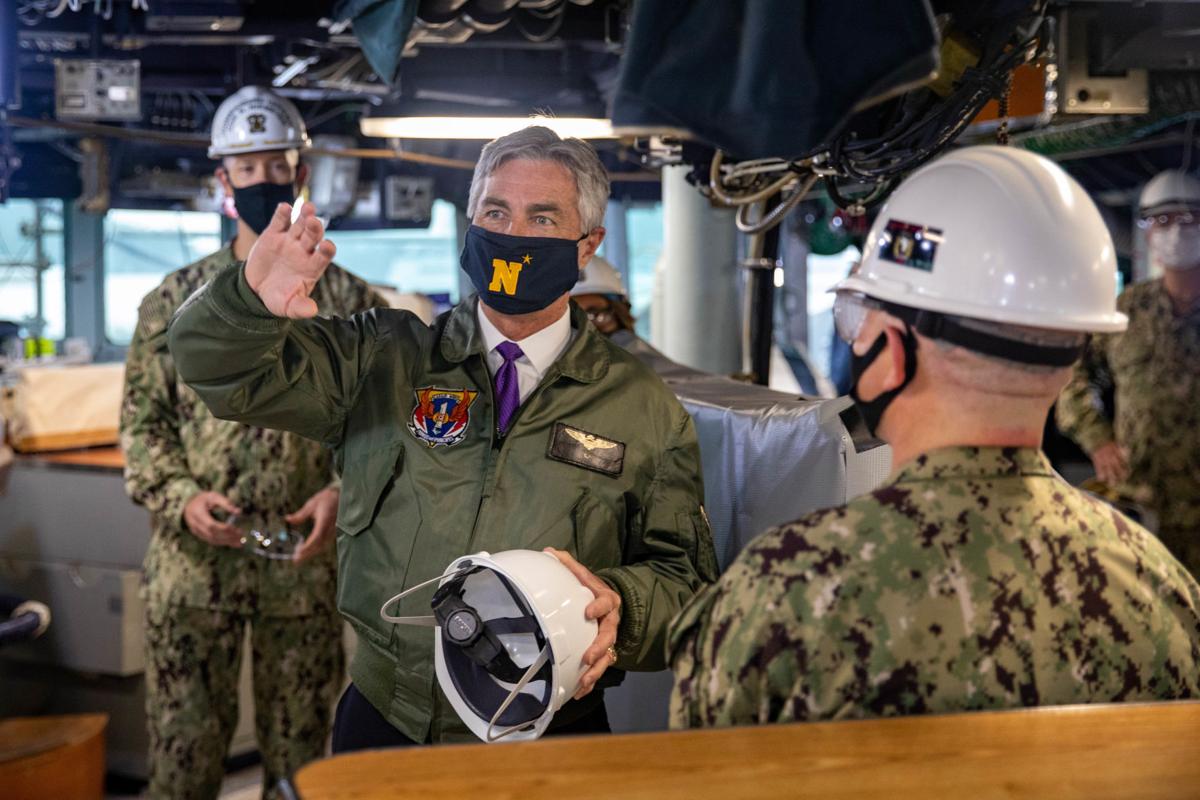 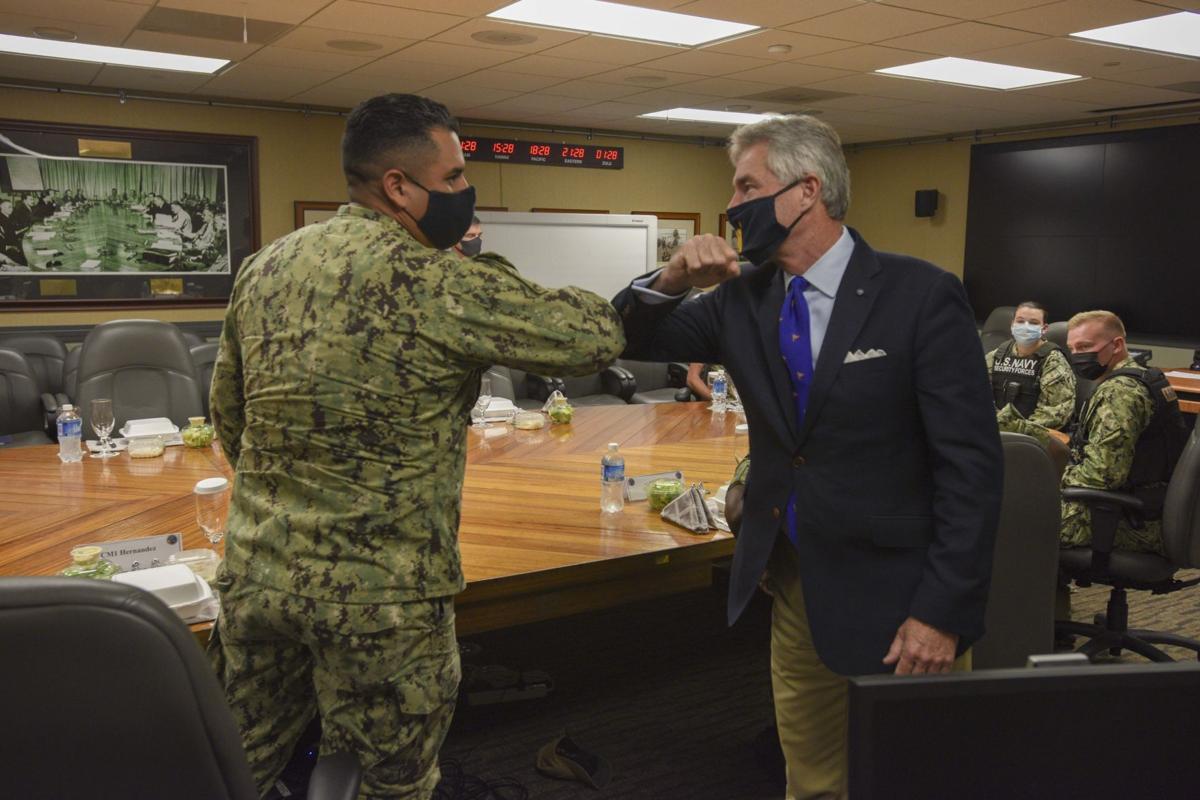 Secretary of the Navy Kenneth J. Braithwaite greets Sailors with an elbow bump during a visit to Joint Region Marianas. Braithwaite visited Guam to meet with military and local government leadership, to speak with service members, and to familiarize himself with Department of Defense assets in the region. 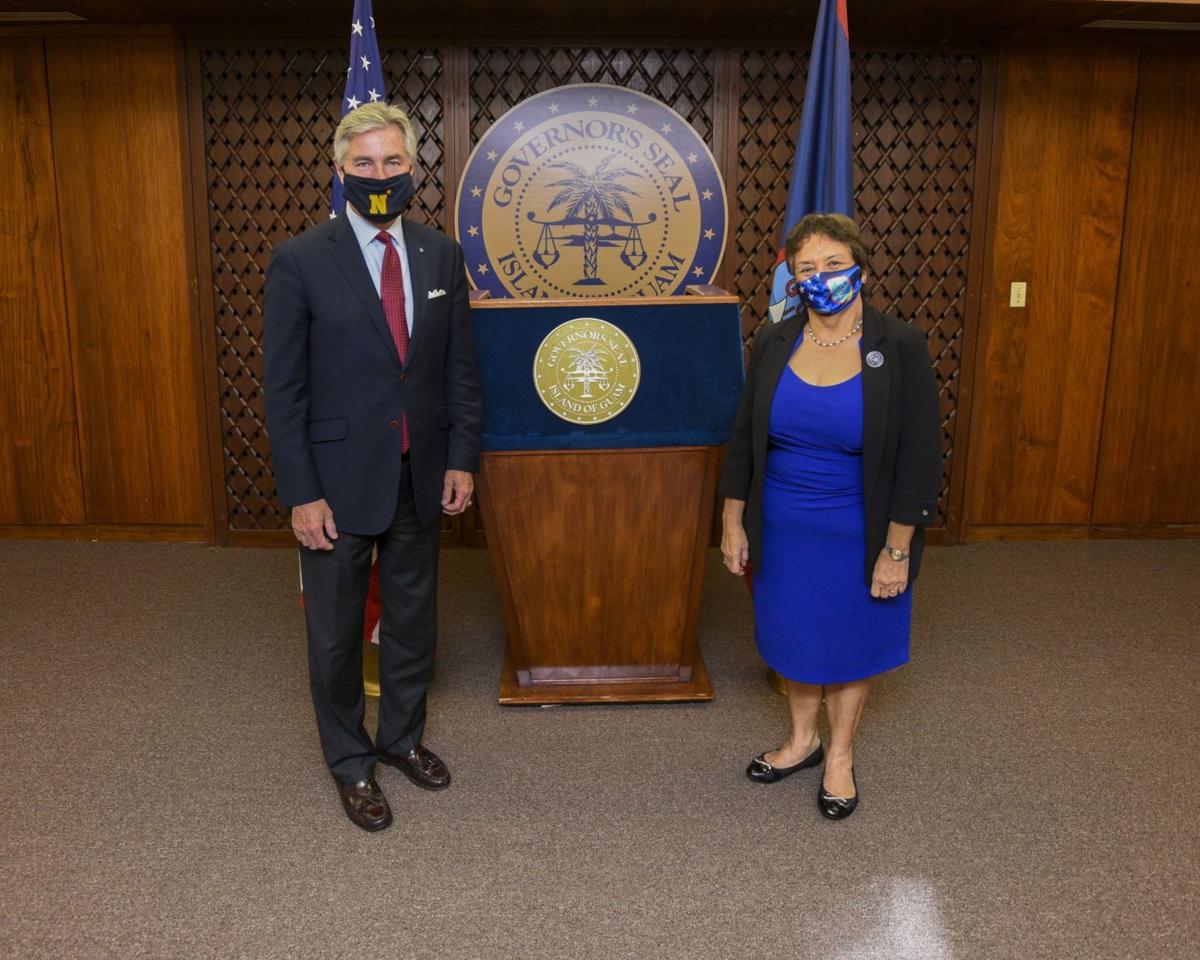 Secretary of the Navy Kenneth J. Braithwaite traveled to the U.S. Indo-Pacific Command area of responsibility Oct. 13-20 reinforcing existing bilateral and multilateral security relationships between the U.S. Navy, and partner and allied countries in the region.

Braithwaite’s trip included stops in Japan, Singapore, Guam, and the Republic of Palau, where he met with Sailors and Marines providing forward presence, and local government and defense officials.

"For more than 75 years, the United States has maintained a continuous forward presence throughout the Pacific. Today, we continue our efforts in this region as we work with our partners and allies to ensure peace and stability for a free and open Indo-Pacific," said Braithwaite.

While in Japan, Braithwaite visited Commander, Fleet Activities Yokosuka, where he met with the ship’s crew and observed morning colors aboard the Arleigh Burke-class guided-missile destroyer USS Milius (DDG 69) in dry dock at the U.S. Naval Ship Repair Facility Japan Regional Maintenance Center. The facility employs both U.S. military and civilian personnel, as well as over 2,000 full-time Japanese Nationals.

"It was an honor to have the Secretary of the Navy visit MILIUS and show him the hard work that our Sailors are putting in to get the ship back into the fight,” said Cdr. Rob Niemeyer, Milius’ Commanding Officer. “The Secretary's personal engagement and conversation with Sailors was the highlight of the visit and will have a lasting impact on my crew."

Braithwaite then met with Japanese Defense Minister Nobuo Kishi along with Japan Maritime Self Defense Force (JMSDF) leadership underscoring that the U.S.–Japan alliance remains the cornerstone of regional peace and stability.

More than 30,000 U.S. Sailors and Marines and most of the Department of the Navy’s regional forward-deployed forces reside in Japan, and the JMSDF participates in numerous U.S. bilateral and multilateral exercises, which increase interoperability between the two navies. In August, the JMSDF participated in Rim of the Pacific (RIMPAC) 2020, which provided a unique training opportunity designed to foster and sustain cooperative relationships that are critical in the region.

"Strengthening these relationships through enhancing interoperability and executing maritime security and awareness operations are vital to maintaining a competitive advantage in this complex global security environment,” said Braithwaite. “None of this would be feasible without the forward-deployed Sailors, Marines and civilians whose efforts of which I could not be more proud."

During the two-day visit in Singapore, Braithwaite met with the Minister for Defence Dr. Ng Eng Hen and Chief of the Defence Force Lt. Gen. Melvyn Ong where they discussed the strong strategic partnership between the U.S. and Singapore.

Braithwaite also expressed appreciation for the regional access Singapore provides to U.S. forces. Singapore facilitates logistical and other support to the many U.S. port visits and military aircraft sorties that use Singapore as a hub each year.

"SECNAV's visit shows the importance of Singapore's support to U.S.Navy presence in Southeast Asia," said Rear Adm. Joey Tynch, commander, Logistics Group Western Pacific. "The Sailors, Marines and civilians executing our mission, from logistics to maintenance to engagement – the work they do is critical and they represent the very best of our Navy and our Nation have to offer. It was a privilege to highlight the people and the mission during his visit."

Braithwaite then traveled to Guam where he met with Governor Leon Guerro before visiting with Marines at the newly activated Marine Corps Base Camp Blaz. Camp Blaz was administratively activated Oct. 1 and will be home to approximately 5,000 Marines from III Marine Expeditionary Force who will begin relocating from Okinawa, Japan, in the first half of the 2020s. Braithwaite also met with Sailors and senior U.S. Navy leaders aboard Naval Base Guam.

Braithwaite concluded his multi-nation Indo-Pacific trip with a stop in the Republic of Palau, where he met with President Tommy E. Remengesau and members of his Cabinet, to discuss the Department of the Navy’s presence and commitment to security and stability in the region, especially the Pacific Islands.

In August, Secretary of Defense Mark Esper visited Palau where he expressed the Department of Defense’s commitment to working with the Pacific island to defend a free and open Indo-Pacific. Palau, with a population of 21,000 and more than 300 islands, has no military forces, but Palauans have served in the U.S. Armed Forces dating back to the Vietnam War.

Secretary of the Navy Kenneth J. Braithwaite greets Sailors with an elbow bump during a visit to Joint Region Marianas. Braithwaite visited Guam to meet with military and local government leadership, to speak with service members, and to familiarize himself with Department of Defense assets in the region.