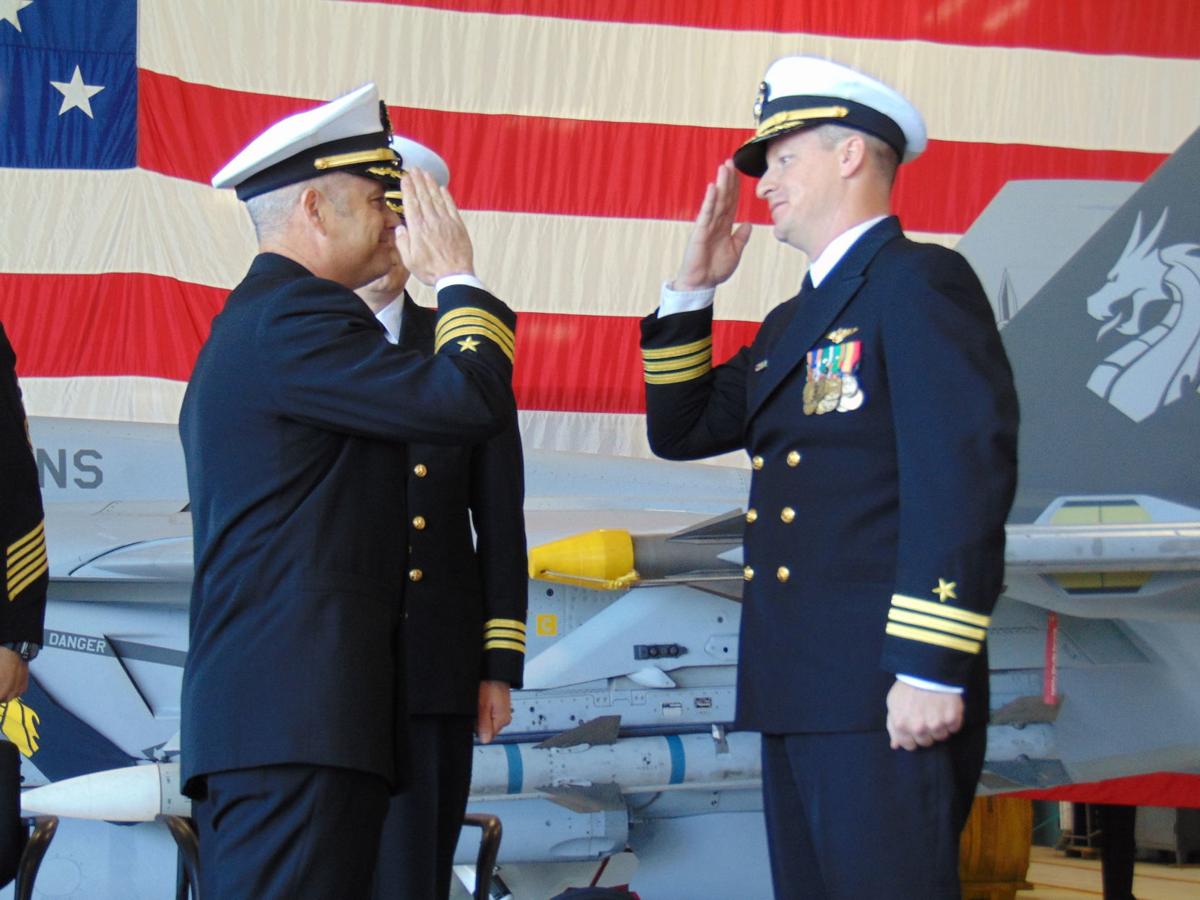 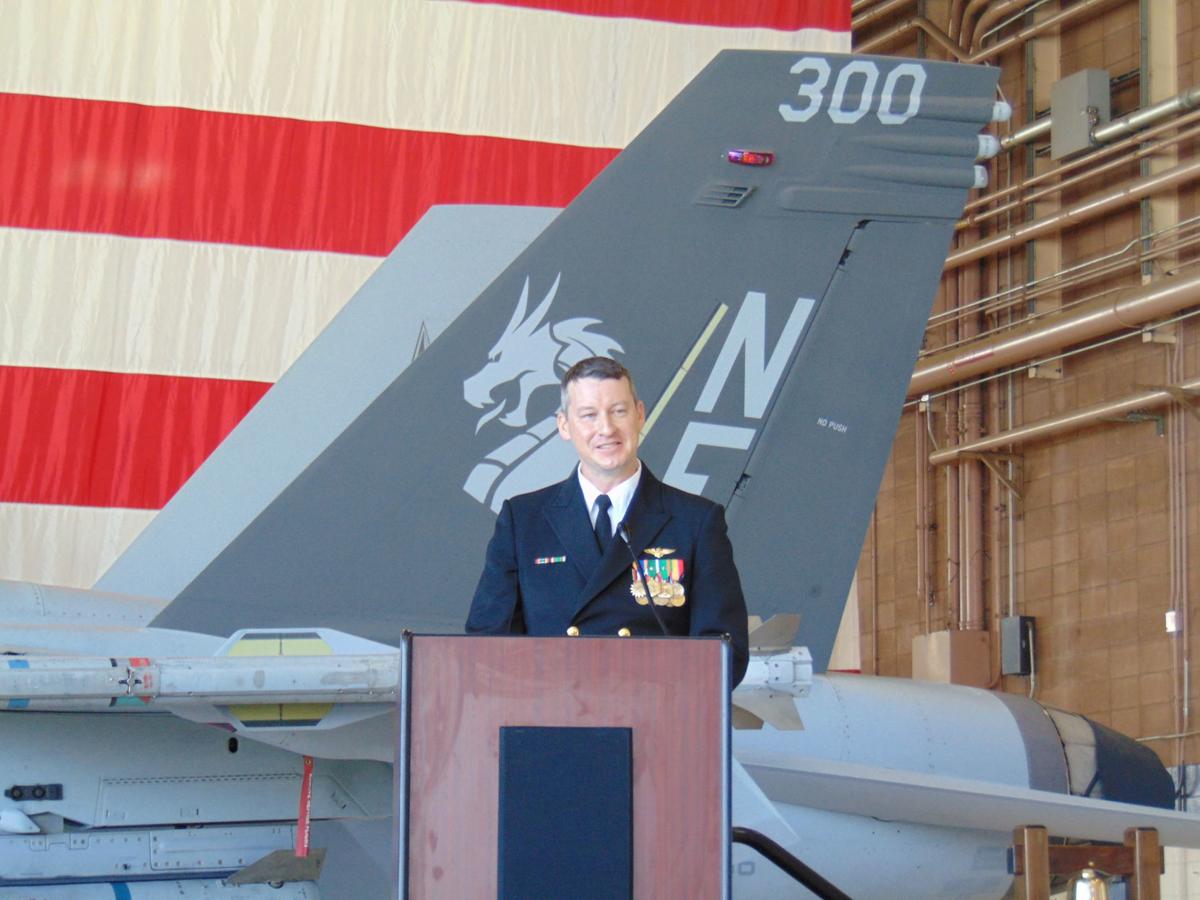 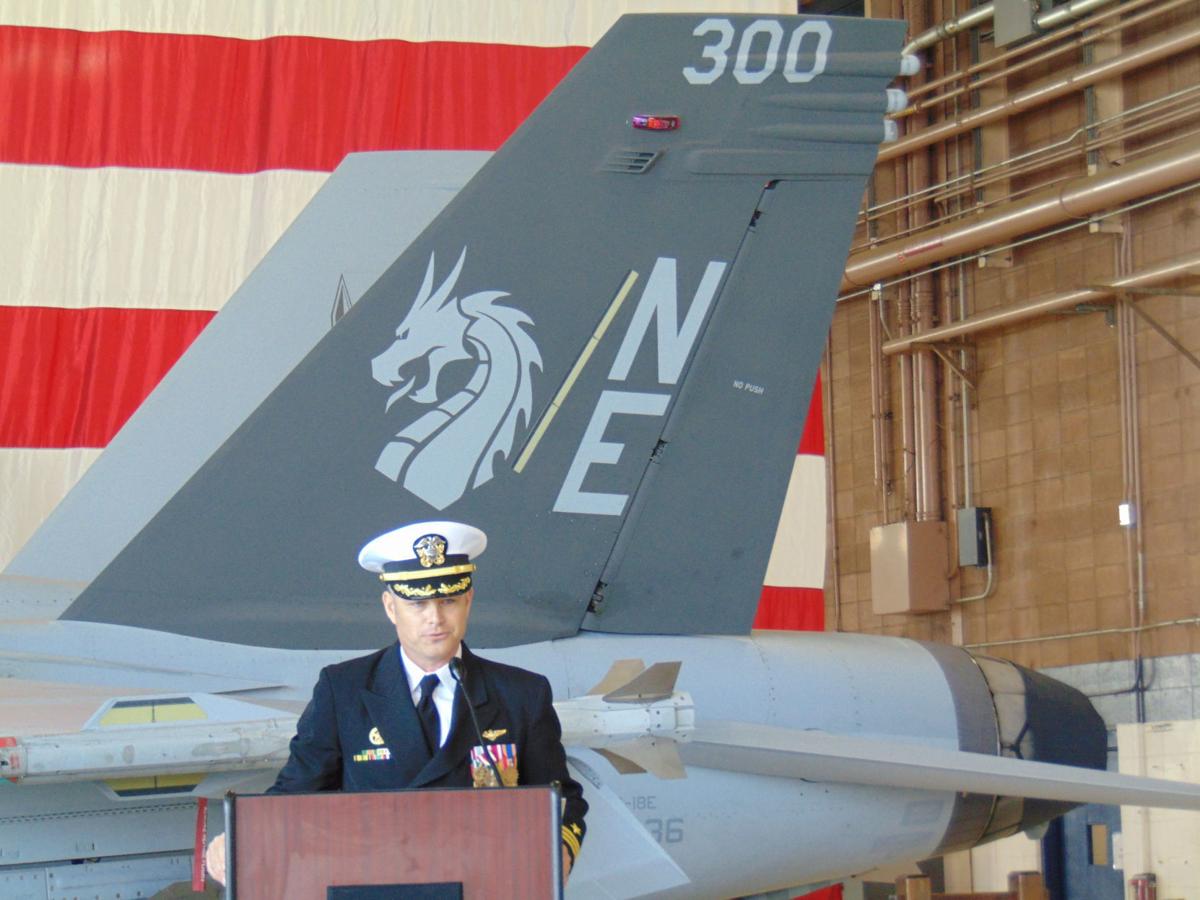 CDR Douglas W. Oldham, a native of Shavertown, Pennsylvania, relieved CDR Mark A. Swinger as the 61st Commanding Officer of the Golden Dragons.

CDR Swinger assumed command on 3 May 2018 and led VFA-192 through RIMPAC 2018, sustainment phase, and into maintenance phase. During CDR Swinger’s 19-month CO tour, the Dragons accepted the first Naval Sustainment System aircraft delivery and transitioned from the oldest Super Hornets in the fleet to brand new, Lot 42 APG-79 Rhinos. During this time, the squadron set the flight line standard with zero critical discrepancies during its 2019 Maintenance Program Assessment, maintained an Enlisted Aviation Warfare Specialist qualification rate of over 78%, and earned the Retention Excellence Award.

CDR Swinger will report to the Office of Legislative Affairs in Washington, D.C. where he will serve as the Aviation Portfolio Manager.

“This has been, without a doubt, the best tour of my Navy career, and I am so fortunate to have been part of the Dragon team as their CO for the past 19 months,” said CDR Swinger. “The miracles which our Officers, Chiefs, and Sailors perform on a daily basis to protect our freedoms are truly inspiring, and I will carry the lessons they taught me for the rest of my career. I truly cannot thank them enough for all that they have given to me, their squadron, and to their nation.”

CDR Oldham assumes command at a crucial point in the squadron’s maintenance phase as VFA-192 continues to receive new aircraft and train new pilots in preparation for workups in spring 2020. “It has been an absolute honor serving with Gopher as his XO for the past 19 months, and I wish him continued success as he heads back east to OLA,’ said CDR Oldham. “It is humbling to be the 61st Dragon Skipper and I am excited for the future as we continue to accept our brand new Lot 42, Config D Super Hornets. These aircraft dramatically improve our combat capability and will play an integral role in countering peer and near-peer competitors.”

CDR Oldham graduated from the United States Merchant Marine Academy in 2001, earning a Bachelor of Science in Maritime Operations and Technology. He reported to NAS Pensacola, Florida for initial flight training and was designated a Naval Aviator in December of 2003. CDR Oldham’s first tour with VFA-192 was in October 2012 where he served as both Operations Officer and Maintenance Officer, deploying in support of Operations NEW DAWN and ENDURING FREEDOM. After earning a Master of Arts in Defense and Strategic Studies from the Naval War College in September 2016, he reported to the Dragons as Executive Officer in May 2018.

VFA-192 is a fixed-wing strike fighter squadron stationed onboard NAS Lemoore and under operational control of Commander, Carrier Air Wing TWO. The squadron was initially established as VF-153 in 1945, prior to the end of World War II, and boasts a rich legacy spanning 74 years and deployments on 12 different aircraft carriers. Its pilots have earned the Medal of Honor, 3 Silver Stars, 2 Legions of Merit with Combat “V,” and 14 Distinguished Flying Crosses. VFA-192’s mission is to provide the United States the ability to maintain a continued forward presence around the world, maintaining freedom of the seas and the ability to project power anywhere, at any time. The Golden Dragons currently fly the Boeing F/A-18E, a single-seat, multirole carrier-borne aircraft and are currently in maintenance phase in preparation for workups beginning in spring 2020.

How much do you know about Mother's Day?