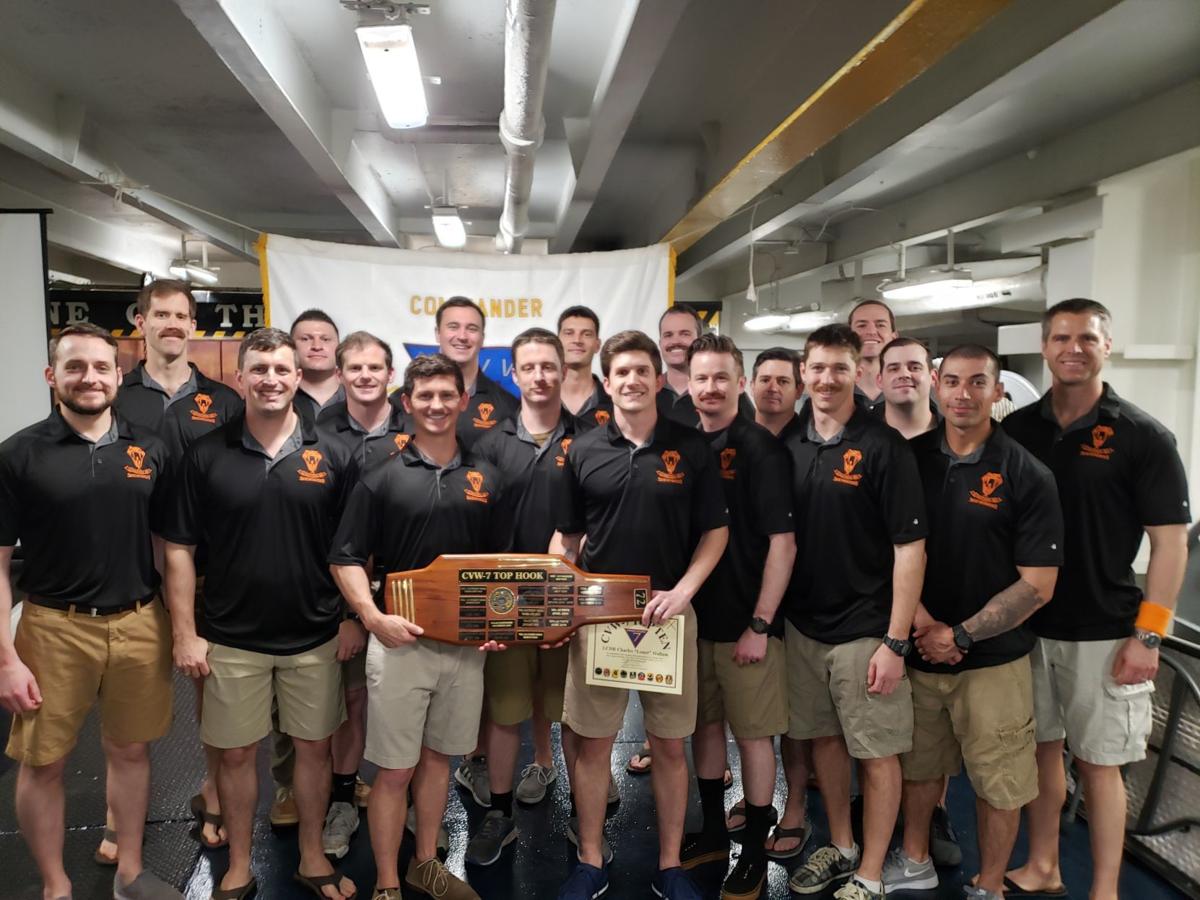 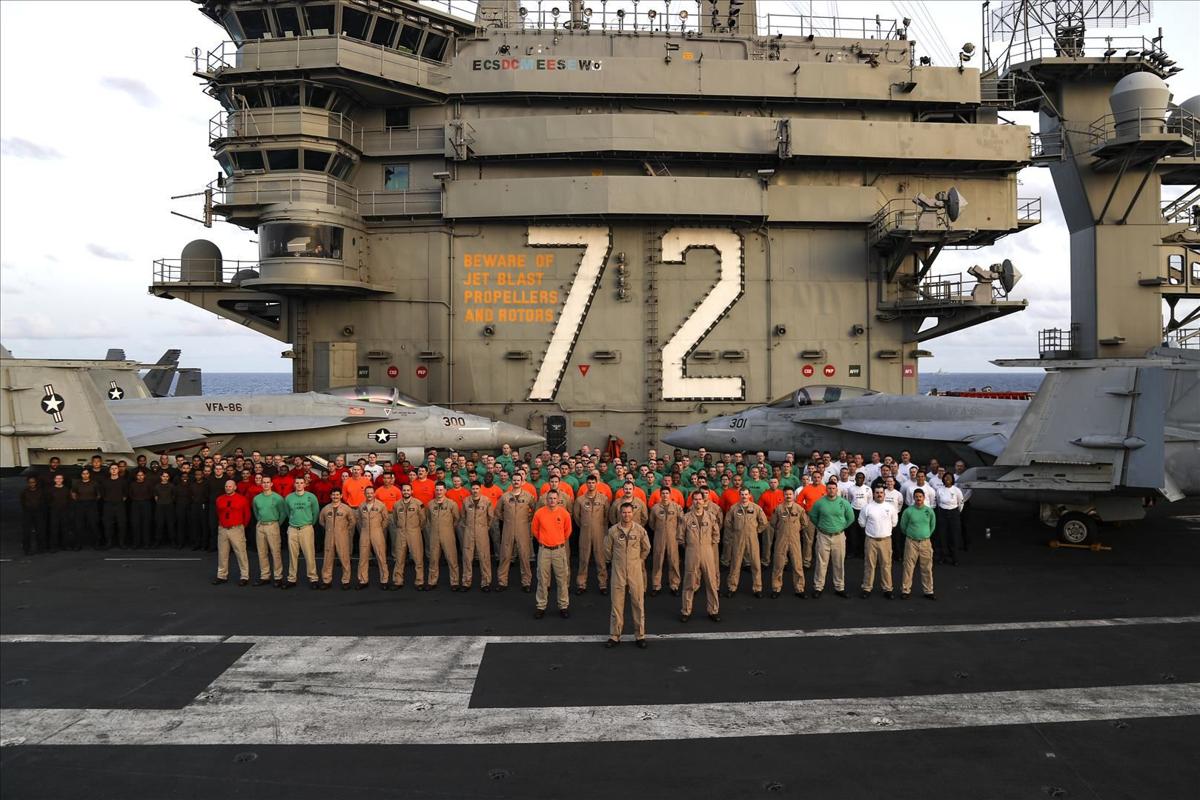 The Sidewinders of Strike Fighter Squadron EIGHT SIX (VFA-86) are completing their ninth month of deployment. Having departed Norfolk, VA aboard the USS ABRAHAM LINCOLN (CVN 72) on April 1st and on station in the North Arabian Sea since May, the Winders have much to celebrate during this Holiday Season. First and foremost is the unwavering support of the Sidewinder families and friends that remain resilient to the many challenges that characterize this deployment.

From the proud men and women of VFA-86, thank you! It is due to your support and the support of the greater NAS Lemoore community during this holiday season that the Winders continue to represent the very best of the United States Navy, forward deployed, executing the orders of the highest levels of military and civilian leadership. Sidewinder Command Master Chief Kraig Vavruska notes that “The Sailors of VFA-86 have been amazing. Through our extensions and ever changing schedule, they have continued to provide everything leadership and our Nation has asked of them. They do all of this with a smile on their face. I could not be more proud to sail with this group of professionals”.

The Sidewinder Administration Department sets the standard across Carrier Air Wing SEVEN (CVW-7), maintaining the Medical Blue M, and leading the way regarding all travel and pay initiatives. Winder Culinary Specialists (CS) have been recognized at CVN 72 Food Service Awards Quarters for their leadership and hard work within the ward rooms and galleys aboard the ship.

Sidewinder Maintenance statistics are staggering. In line with the direction of the Naval Aviation Enterprise (NAE) to achieve 80% Mission Capable (MC) Super Hornets across the Strike Fighter Community by 1 October 2019, the Sidewinders reported nine MC warhorses on day 100+86 of deployment, exceeding daily MC and NAE initiative expectations. Additionally, without having received the Operational-Level Reform (OLR) training prior to deployment, Sidewinder maintenance conducted the OLR training in-house and is able to report 100 percent compliance with the “CSFWP 84, 168, 336 Day Specials Inspection Playbook” for nine consecutive months. On the flight deck, the Sidewinders demonstrate their precision and professionalism in the daily support of the flight schedule, maintaining a 98% sortie completion rate. “The Sidewinders have faced many challenges during this deployment, but I’m very proud of the resiliency and teamwork our sailors have continued to show” states CDR Rob “Bonesaw” Stimis, VFA-86 Executive Officer.

Sidewinder Operations continues to lead in the air. Supporting Operation FREEDOM’S SENTINEL (OFS) in Afghanistan and Operation INHERENT RESOLVE (OIR) in Syria, Sidewinder pilots have answered the call in combat and met Ground Force Commander’s intent with each lethal and precise employment. The Sidewinders have also qualified three SFWT Level II, one SFWT Level III, two SFWT Level IV, two Air Wing Mission Commanders, and one SFWT Level IV(Instructor) during this deployment. During the CNAL flight hour crunch in August-September 2019, the Winders supported CVW-7 by flying VFA-103 pilots to supplement their proficiency and readiness, all in addition to executing a robust in-house flight schedule. Finally, the Sidewinders proved their mettle in the carrier environment, receiving the CVW-7 Top Hook award for Line Period 3.

In what has been a dynamic and complex operating environment, Sidewinder Intelligence stands out as the leaders not only within CVW-7, but throughout Carrier Strike Group TWELVE (CSG-12) intel departments. IS2 Chelsea Willix is recognized as the resident expert aboard the carrier and produces weekly Geo-Political Analysis, which she briefs to the highest levels of leadership aboard the ship. Most notably, LTJG Tom “MFTN” Trettin received the 2019 CVW-7 Lieutenant Darin Pontell Memorial Award and is nominated for the 2019 CNAL Aviation Intelligence and Cryptology Officer Of The Year Award.

The Commanding Officer of VFA-86, CDR Cade “Frumba” Hines, wraps it up well, “I could not be more proud of our Sidewinders. Though it is a tremendous strain on our families back home, each Sidewinder recognizes the sacrifice that often accompanies the call to serve. When I visit with Sidewinders, even after being at sea for nine months and counting, I do not see despair or capitulation, rather I see resiliency, toughness, and determination to finish the mission with a sense of accomplishment and satisfaction. To the Sidewinder families back home, Happy Holidays! We miss you tremendously, but thank you for your unwavering support. Sidewinder Strong!”

VFA-86 remains deployed onboard CVN 72 and expects to return to NAS Lemoore in early 2020.

NAS LEMOORE — Aircraft Number 166464 had waited a long time to get back into the fight.  Due largely in part to constrained Navy budgets, the …

GUAM — NEX Guam is serving three meals per day for those Sailors aboard the USS Theodore Roosevelt (CVN 71) as well as a U.S. Marine Corps con…

Statement by Acting Secretary of the Navy James E. McPherson on Preliminary Inquiry