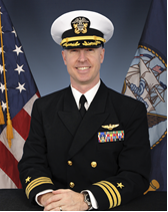 “The highlight of this tour has been working with each and every squadron from here in Lemoore to all the way out in Japan, knowing that our mission has been helping those squadrons accomplish theirs. Our job is to ensure every PACFLEET Strike-Fighter squadron has all the tools they need to succeed in combat. Knowing they are all Outlaw-trained is a tremendous responsibility, but also something we take a great deal of pride in. It has been the greatest honor and privilege of my career to serve such highly skilled professionals at SFWSPAC as their Commanding Officer,” said Hess.

Johnson is the 36th commanding officer to lead SFWSPAC and has assumed command during yet another challenging SFARP season. Under Johnson’s command, “The Outlaws” will integrate the F-35C into the fleet training syllabus. This will not be Johnson’s first tour at SFWPAC. After his junior officer tour with the “TOPHATTERS” of VFA-14, Johnson completed TOPGUN and was assigned to SFWSPAC, serving as the Adversary Officer and Annex Department Head. Johnson returned to the “TOPHATTERS” for his Department Head tour and was selected as the Aide-de-Camp (ADC) to the USNORTHCOM Combatant Commander at Peterson AFB, Colorado prior to returning to SFWSPAC as the Executive Officer in 2017.

“The Outlaws have a long tradition of persistent professionalism, and I look forward to the opportunity to lead these dedicated service members. We will work tirelessly to maximize the survivability and lethality of strike fighter aircrew onboard NAS Lemoore, ensuring all who deploy in protection of our freedoms come home safely, with the mission accomplished,” said Johnson.

Currently SFWSPAC is staffed with 23 officers, 29 enlisted personnel and 7 civilians.

How much do you know about Mother's Day?