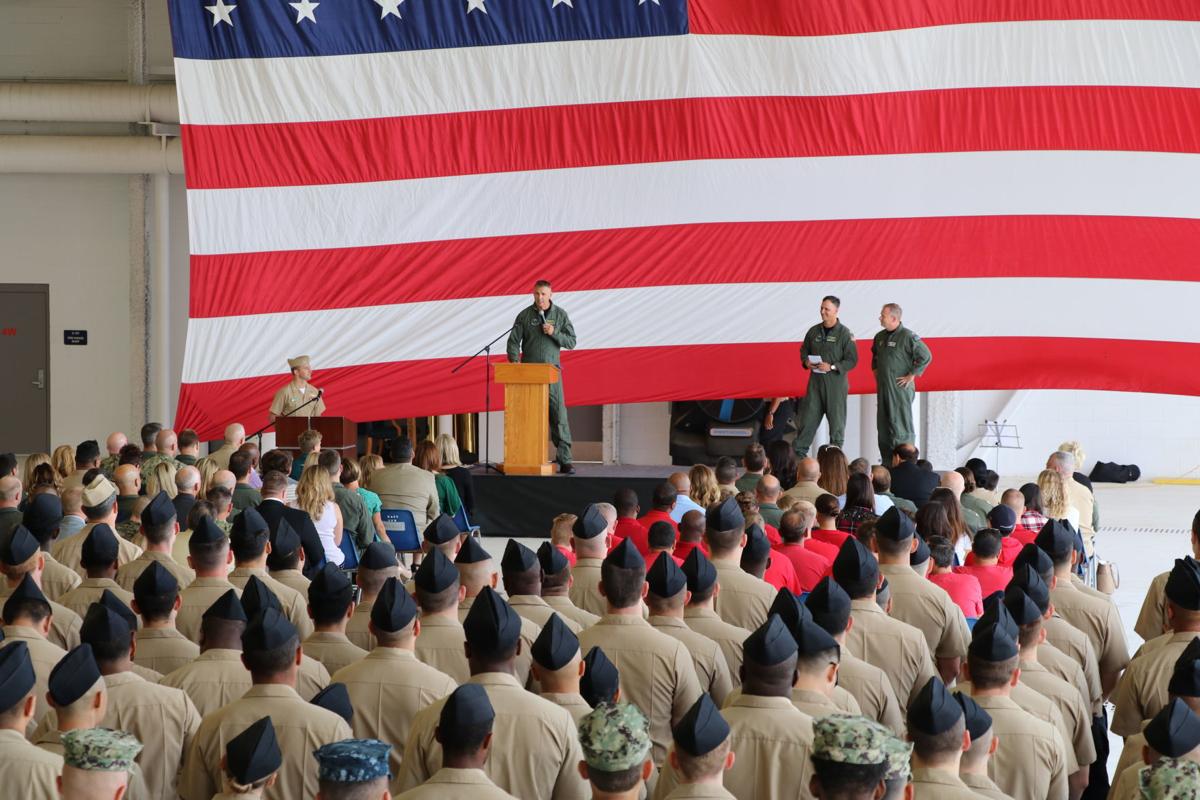 Capt. Tommy Bo Locke addresses the Sailors and Marines of Strike Fighter Squadron (VFA) 125 "Rough Raiders" during a change of command ceremony aboard Naval Air Station Lemoore.  VFA-125 is the Fleet Replacement Squadron for the U.S Navy and Marine Corp F-35C Lightning II. Cmdr. Adan Covarrubias assumed command of the squadron after serving as the commanding officer for VFA-101 "Grim Reapers" that was recently deactivated at Eglin Air Force Base last month. 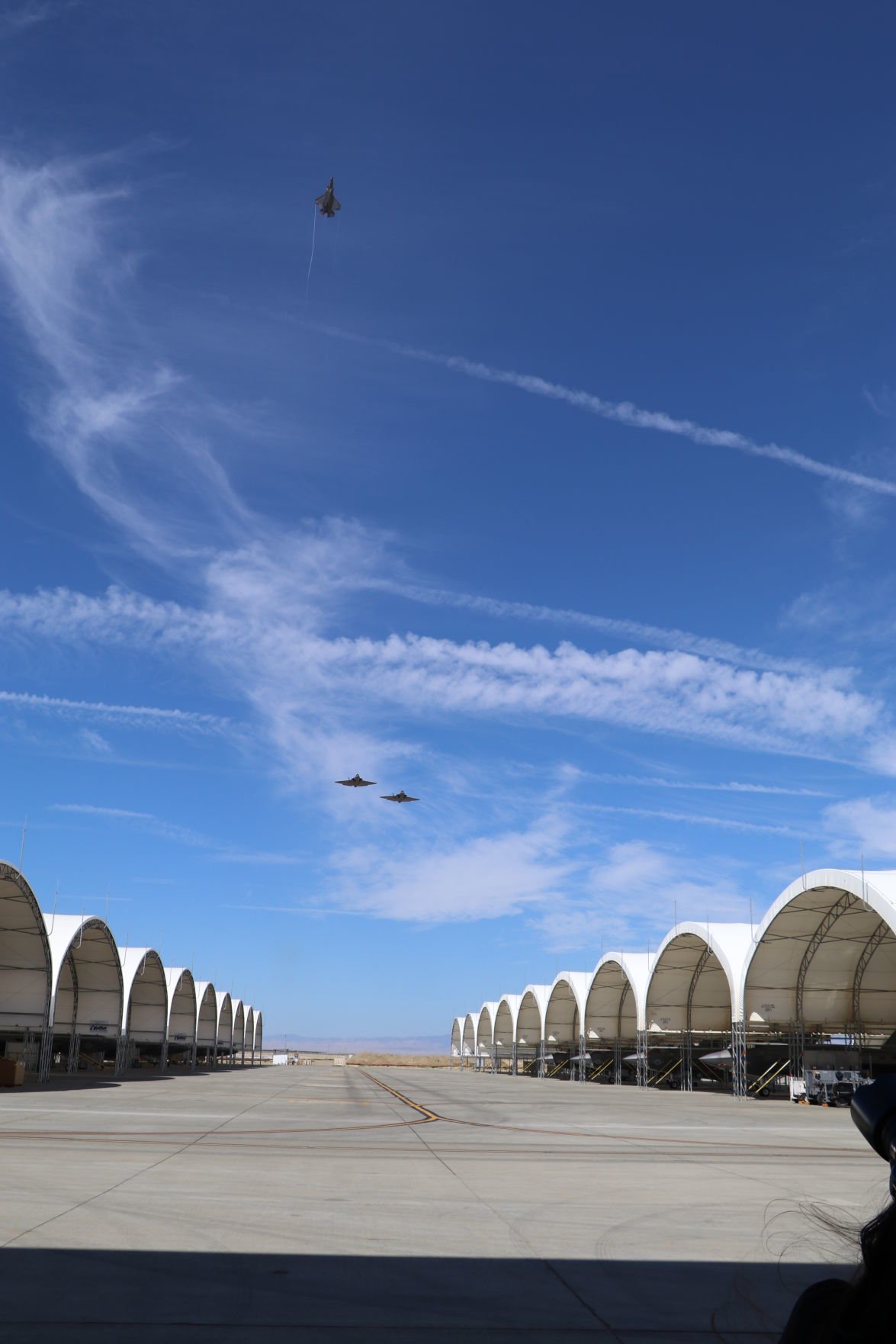 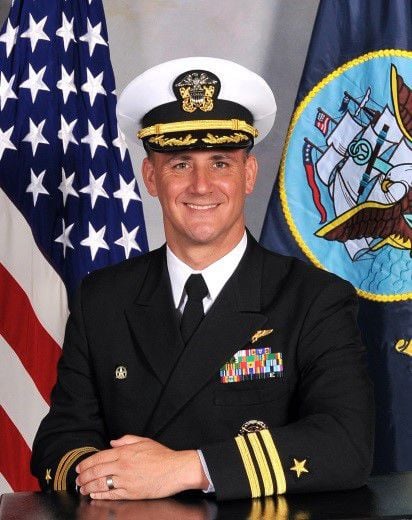 Capt. Tommy Bo Locke addresses the Sailors and Marines of Strike Fighter Squadron (VFA) 125 "Rough Raiders" during a change of command ceremony aboard Naval Air Station Lemoore.  VFA-125 is the Fleet Replacement Squadron for the U.S Navy and Marine Corp F-35C Lightning II. Cmdr. Adan Covarrubias assumed command of the squadron after serving as the commanding officer for VFA-101 "Grim Reapers" that was recently deactivated at Eglin Air Force Base last month.

Cmdr. Adan Covarrubias, from Buena Park, Calif. relieved Capt. Tommy Locke Jr. from Umatilla, Fla., during an Airborne Change of Command ceremony held at NAS Lemoore (NASL), Calif. Locke assumed command in April 2017, shortly after the first F-35C arrived at NAS Lemoore and the squadron was reactivated in January of the same year. During his time as the Commanding Officer, the Rough Raiders implemented the full-spectrum of aviation operations, maintenance, training and safety programs for the F-35C. This significantly contributed to several program milestones, including the induction and syllabus completion of the first newly-winged F-35C flight students, the Safe-for-Flight Operations Certifications (SFFOC) for the first operational U.S. Navy F-35C squadron, the Initial Operational Capability (IOC) declaration in February 2019 and the first carrier-deployed (Autonomic Logistics Information System) ALIS. Additionally, the Rough Raiders completed more than 3,300 flight hours encompassing more than 2,000 mishap-free sorties. Locke’s next duty assignment is to Carrier Air Wing (CVW) TWO “Broadsword” at NAS Lemoore as the Deputy, Carrier Air Group.

During his remarks to the squadron, Locke attributed the success of his tour as commanding officer to the tenacity and hard-work of the Rough Raider team. “This program is where it is today because of you,” said Locke. “If you put this aircraft in the hands of motivated Sailors and Marines, there is nothing they cannot accomplish.”

Covarrubias is the 43rd commanding officer to lead VFA-125 “Rough Raiders” and has assumed command at a crucial point in the development of the F-35C program at NAS Lemoore. Prior to serving as the commanding officer for VFA-125, Covarrubias was the commanding officer for VFA-101 “Grim Reapers” at Eglin AFB in Fort Walton Beach, Fla. In that role, Covarrubias and his team were instrumental in jump-starting the U.S. Navy’s F-35C program when it first arrived at Eglin in 2012 by establishing the framework for the Fleet Replacement Squadron (FRS) syllabus and going on to shape the community by filling seats at VX-9 DET Edwards, VFA-125, VFA-147 and Commander Joint Strike Fighter Wing. The squadron was recently deactivated last month to consolidate F-35C assets at NAS Lemoore, enabling the U.S. Navy to better support FRS production, operational fleet transitions for both U.S Navy and Marine Corps squadrons, Initial Operation Test & Evaluation (IOT&E) and Naval Aviation Warfare Development Command (NAWDC) requirements.

“My plan as the commanding officer for this squadron is to continue to provide the support that the Fleet needs to bring this incredible aircraft and all the personnel and programs associated with it to our warfighters,” remarked Covarrubias to the squadron. “For me and this team, that is the number one priority. The F-35C is the right aircraft for the Carrier Air Wing of tomorrow.”

Naval Air Station Lemoore (NASL) is the home-base for Commander, Joint Strike Fighter Wing, the Navy’s F-35C fleet squadrons and the sole location for the Fleet Replacement Squadron (FRS), VFA-125 that trains both Navy and Marine Corps CVN-based JSF pilots. To accommodate the F-35C program at NAS Lemoore, several facilities were built or remodeled to facilitate specific F-35C requirements with regard to maintenance and training, including a Pilot Fit Facility, Centralized Engine Repair Facility, Pilot Training Center and a newly-remodeled Hangar. Future projects are planned as additional Navy squadrons transition into the F-35C. Marine Corps F-35C squadrons will be based at Marine Corps Air Station Miramar, Calif.