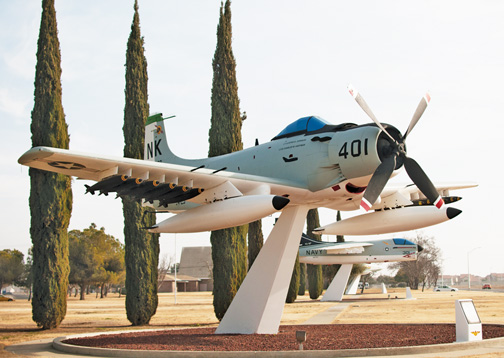 The A-1 Skyraider wears the colors of the VA-25 Fist of the Fleet, commemorating the last operational A-1 squadron assigned to NAS Lemoore. 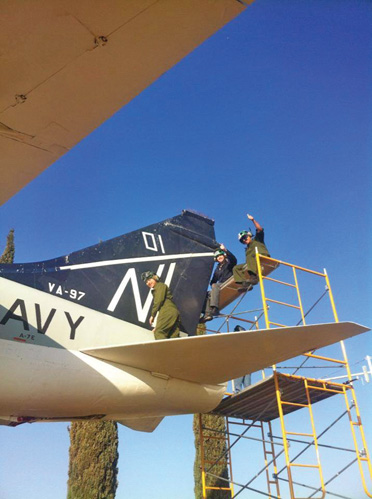 The A-1 Skyraider wears the colors of the VA-25 Fist of the Fleet, commemorating the last operational A-1 squadron assigned to NAS Lemoore.

The Navy’s premier attack squadrons have called Naval Air Station Lemoore home for over 40 years. During that time frame many different types of aircraft and thousands of Sailors also called NAS Lemoore home. To pay homage to the rich history and traditions of these squadrons and to honor their Sailors and family members, NAS Lemoore erected three retired aircraft as static displays just inside of the base’s main gate starting back in 1965. All three of the aircraft located between the base chapel and administration building are maintained by squadrons assigned to Carrier Air Wing Nine (CVW-9). Each of the responsible squadrons recently gave each aircraft a plane wash and a fresh coat of paint, keeping these tributes to our past in ship-shape condition.

The first aircraft you come across driving onto base is an A-1 Skyraider in the colors of the VA-25 Fist of the Fleet, commemorating the last operational A-1 squadron assigned to NAS Lemoore. On the right side of the fuselage are the names of Lt. Clinton B. Johnson and Lt. j.g. Charles W. Hartman with the silhouette of a MiG-17 painted just below. This portion of the display serves as recognition to their shared accomplishment of shooting down a MiG-17 on 20 June 1965 during the Vietnam conflict.

The second aircraft you come across is an A-7 Corsair II in the colors of the VA-97 Warhawks, commemorating the last operational A-7 squadron assigned to NAS Lemoore. VA-97 flew the A-7 from commissioning in 1968 until transitioning to the F/A-18 Hornet in 1991. During that time the men and women of VA-97 served with distinction over several combat cruises, and as a tribute to all of the Sailors, aviators, and their family members, the aircraft remains nameless.

The third and final aircraft you come across is an A-4 Skyhawk in the colors of the VA-192 Golden Dragons, serving as tribute to Capt. Michael J. Estocin and his selfless gallantry while serving as a Golden Dragon during the Vietnam Conflict. Estocin was posthumously awarded the Nation’s highest military honor, the Congressional Medal of Honor, for his actions on the 20th and 26th of April 1967 and later promoted to the rank of captain while presumed to be a prisoner of war. His Medal Of Honor citation is located on a bronze plaque below the nose of the aircraft.

Several Sailors from VFA-25, VFA-97, and VFA-192 took part in the clean-up, maintenance, and painting of the three aircraft a few weeks ago. About the experience, AM2(AW) Stephen O. McGinness said "That was a wow kind of moment, when I read the plaque under the Skyhawk and learned about the Medal of Honor the pilot received for his actions in Vietnam." AM3(AW) Jayne M. McAllister agreed and said, "I had never thought twice about them before, but after working on those aircraft I learned a lot about them and the aviation history that they're a part of."

The next time you drive by these static display aircraft, consider pulling into the parking lot nearby and walking around these tributes to our rich history and the proud traditions of the United States Navy’s attack squadrons of yore.