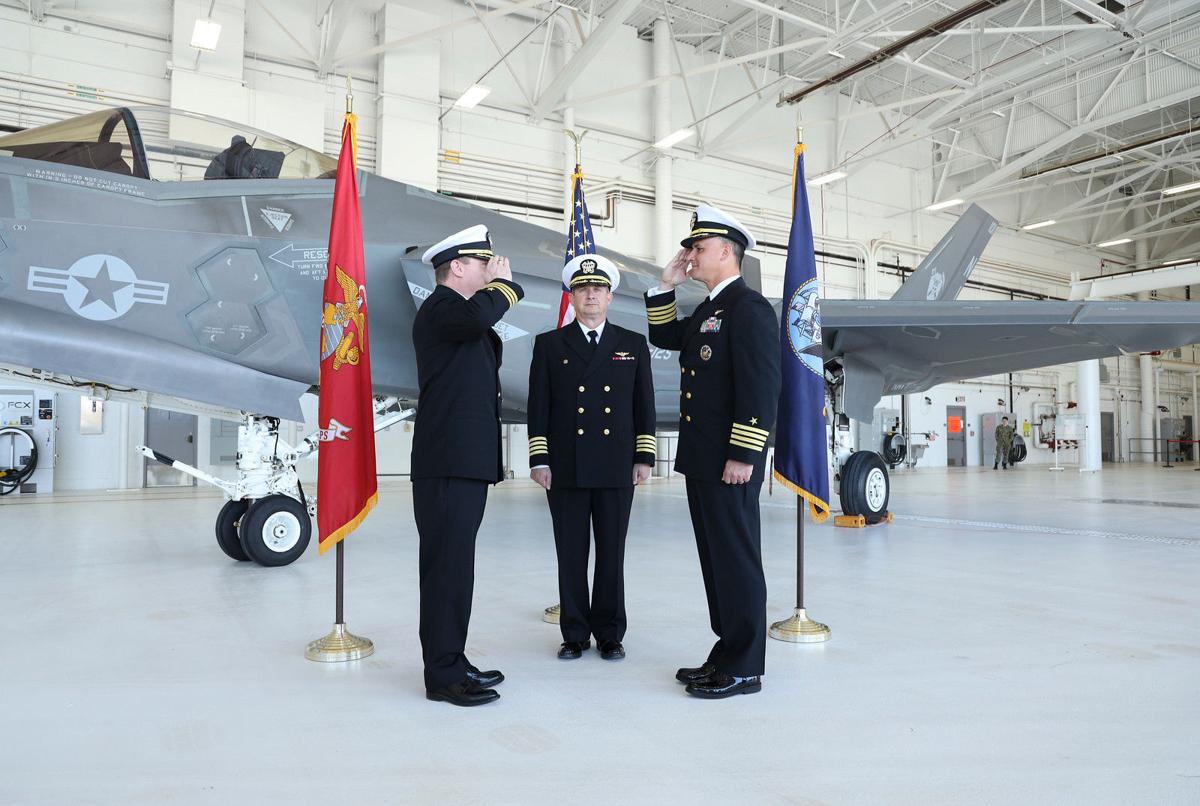 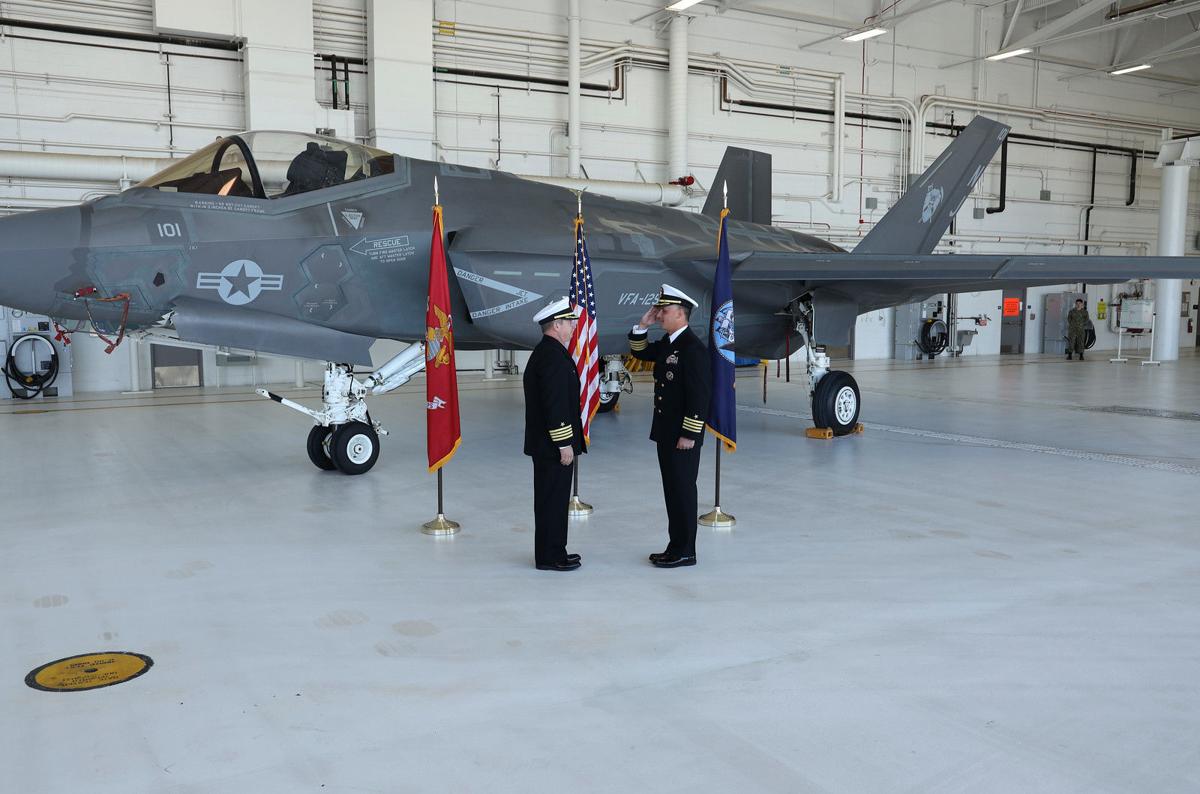 Capt. Adan Covarrubias salutes Capt. Max McCoy shortly after assuming command as the Commodore for Commander, Joint Strike Fighter Wing at NAS Lemoore during a change of command ceremony aboard the installation.

Corrigan is the 44th commanding officer to lead VFA-125 “Rough Raiders” and has assumed command at a crucial point in the development of the F-35C program at NAS Lemoore.  Prior to serving as the commanding officer for VFA-125, Corrigan was the F-35C Requirements Officer on the OPNAV Staff in Washington D.C.  In that role, Corrigan and his team were responsible for the Navy’s policy, requirements definition, programing and budgeting for all F-35C resources.

During his time as the commanding officer, Covarrubias led the Rough Raiders through the full-spectrum of aviation operations, maintenance, training and safety programs for the F-35C.  This significantly contributed to several program milestones, including the safe-for-flight operations certification and  transition of the first U.S. Marine Corps F-35C squadron, VMFA-314 that will deploy with Carrier Air Group Nine (CVW-9) as part of U.S. Navy and Marine Corps tactical aviation integration (TAI).  Under his leadership, VFA-125 graduated the first Category ONE Fleet replacement pilots as well as supported Naval Aviation Warfighting Development Center (NAWDC) and TOPGUN during the inaugural F-35C TOPGUN class.   Additionally, the Rough Raiders completed more than 3,300 flight hours encompassing more than 2,000 mishap-free sorties.  Covarrubias’ next duty assignment is to the Joint Strike Fighter Wing where he will serve as the Commodore.

“It was an honor and a privilege to serve as the Rough Raider and previous to that, the Grim Reaper commanding officer supporting F-35C as we focus on first-deployment initiatives and Fleet production” said Covarrubias.  “The F-35C is the centerpiece of the carrier air wing and will have a lasting impact on Naval Aviation.  I appreciate the work and dedication of all the VFA-125 Sailors and Marines that contributed to that goal.  The credit truly belongs to the Rough Raider team.”

Covarrubias relieved McCoy as the commodore for CJSFW shortly after Corrigan assumed command of VFA-125.  Commander, Joint Strike Fighter Wing officially opened its doors, August 1, 2018. Its mission is to provide combat-ready F-35C assets that are fully trained, properly manned and well maintained to support and win global maritime engagements.  McCoy served as the inaugural Commodore for the Navy’s first Joint Strike Fighter Wing.  Since that time, he and his team have accomplished several milestones, including the Safe-for-Flight Operations Certification (SFFOC) of the U.S. Navy and U.S. Marine Corps first Operational F-35C Squadrons – VFA-147 “Argonauts” and VMFA-314 “Black Knights,” achieving Initial Operational Capability (IOC) for the F-35C, VFA-101 “Grim Reapers” deactivation, the introduction and syllabus completion of the first newly-winged F-35C students, the first carrier-deployed Autonomic Logistics Information System (ALIS), the graduation of the first F-35C Top Gun Class as well as multiple carrier detachments and other program milestones. McCoy’s next duty assignment is to Commander, Naval Air Forces in San Diego as the Chief of Staff.

“NAS Lemoore and the Joint Strike Fighter Wing achieved numerous milestones in the last two years,” said McCoy.  “The F-35C program will continue to gain momentum.  It is a game changer.  It gives our pilots an unprecedented advantage against any adversary enabling them to complete their mission and come home safe.  The F-35C owns the fight today but must continue to field new capabilities to maintain our technical advantage and outpace the threat.  It was an incredible privilege to lead the Sailors and Marines who introduced 5th generation capability to NAS Lemoore and the Carrier Strike Group.”

Capt. Adan Covarrubias salutes Capt. Max McCoy shortly after assuming command as the Commodore for Commander, Joint Strike Fighter Wing at NAS Lemoore during a change of command ceremony aboard the installation.