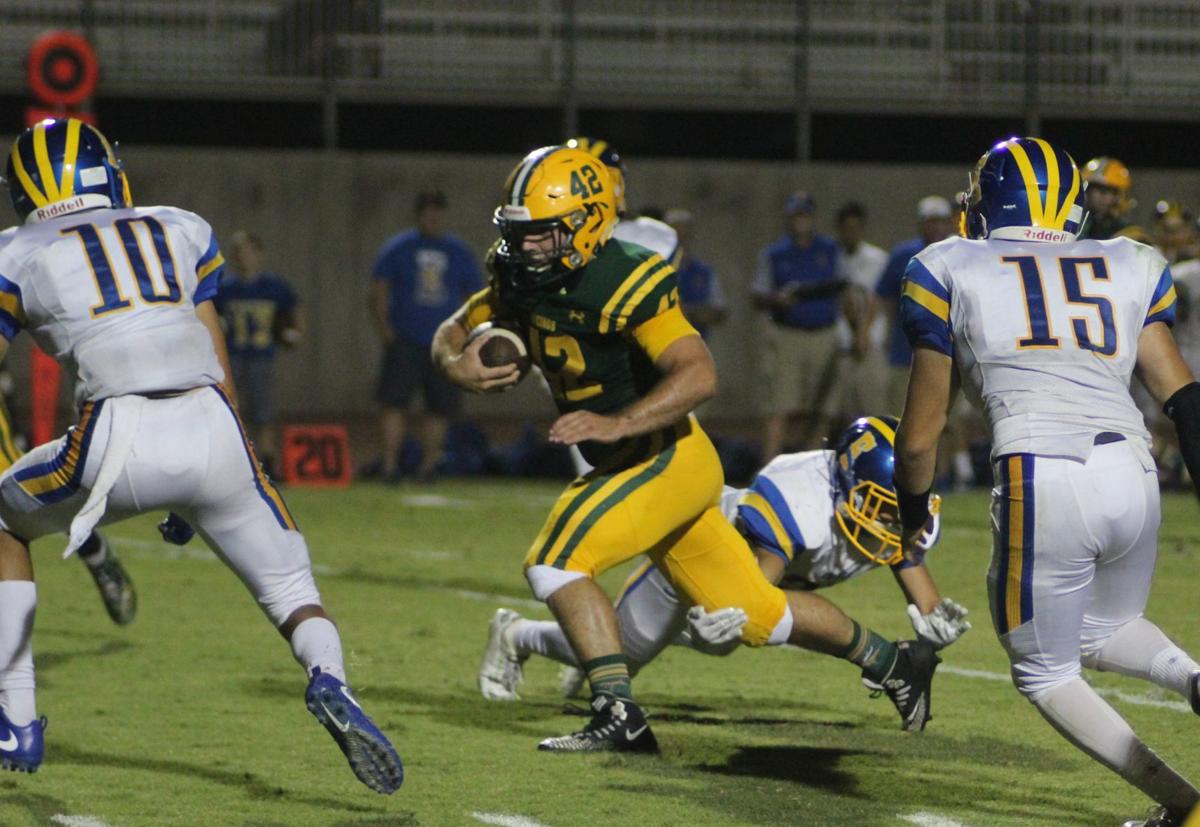 Kingsburg running back Bo Jackson (42) runs with ball inside the red zone during the Vikings homecoming game against Exeter on Sept. 28. Jackson scored three touchdowns on the ground against the Monarchs. 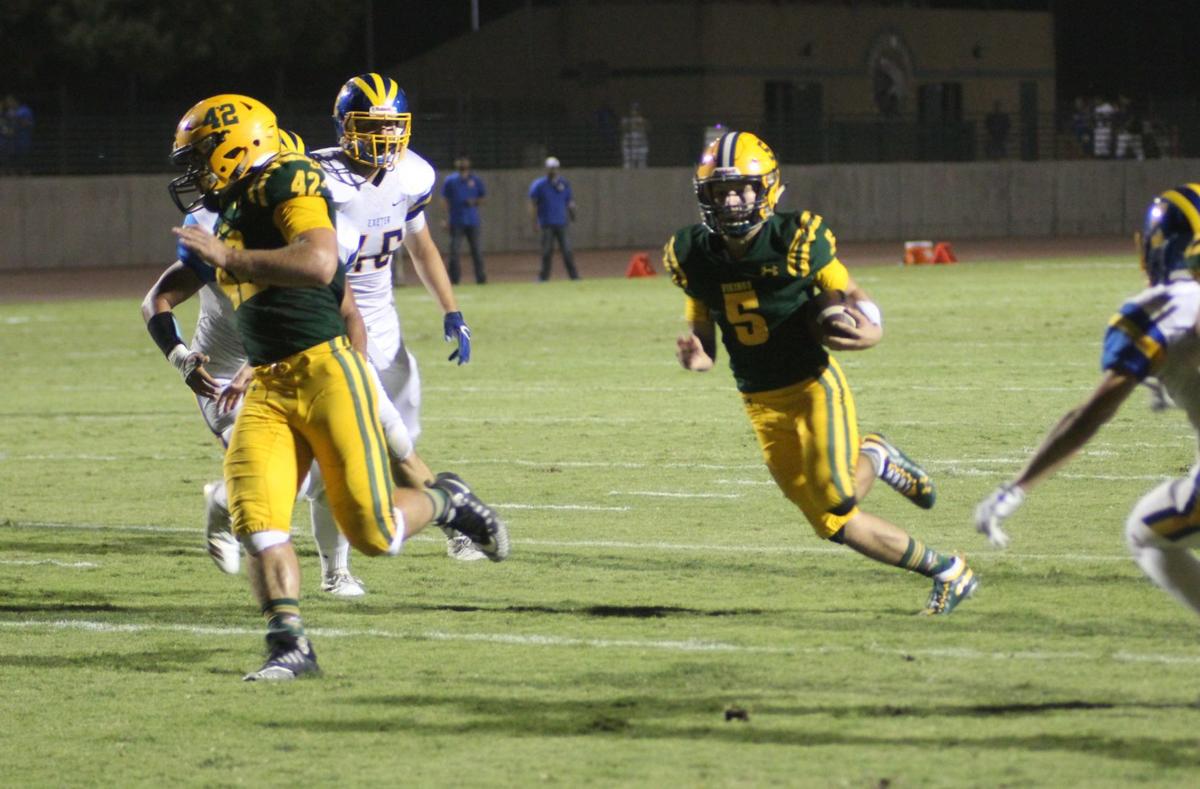 Kingsburg quarterback Jett Jackson (5) rushes into the end zone for a 9-yard score against Exeter during the Vikings homecoming game on Sept. 28. Jackson had three total touchdowns (two passing, one rushing) against the Monarchs. 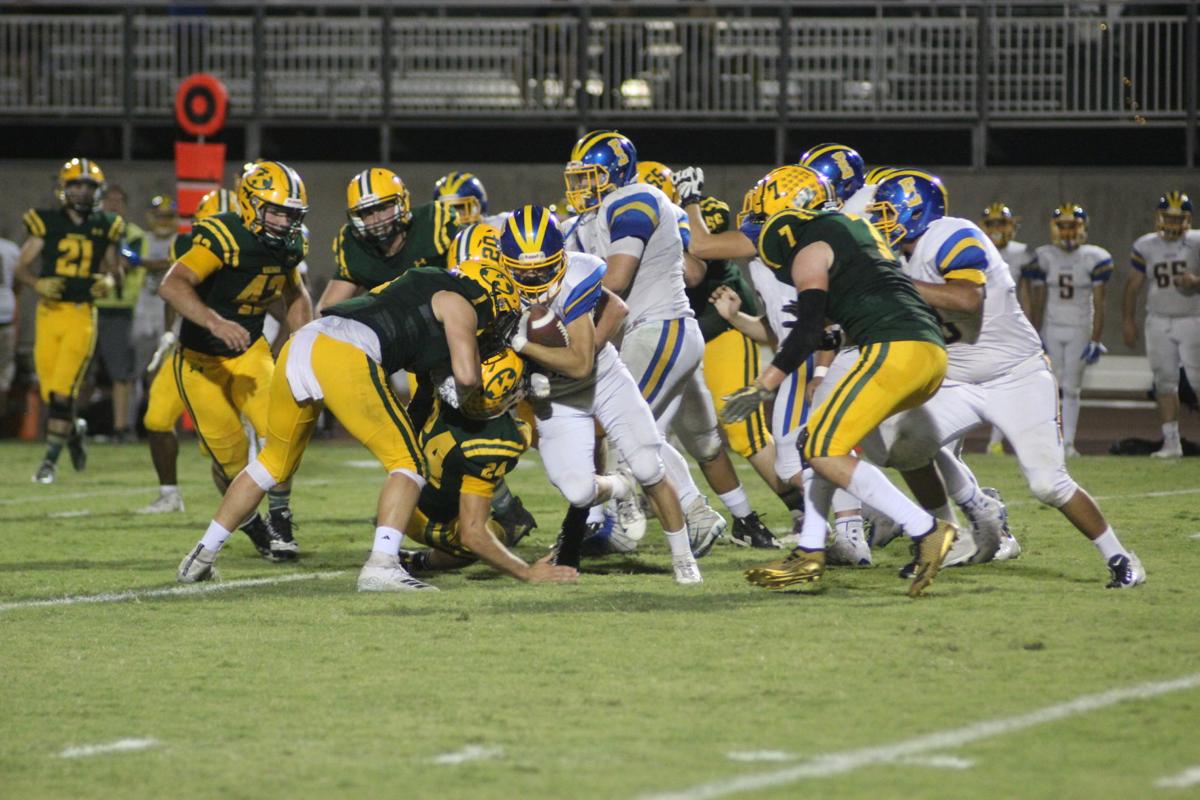 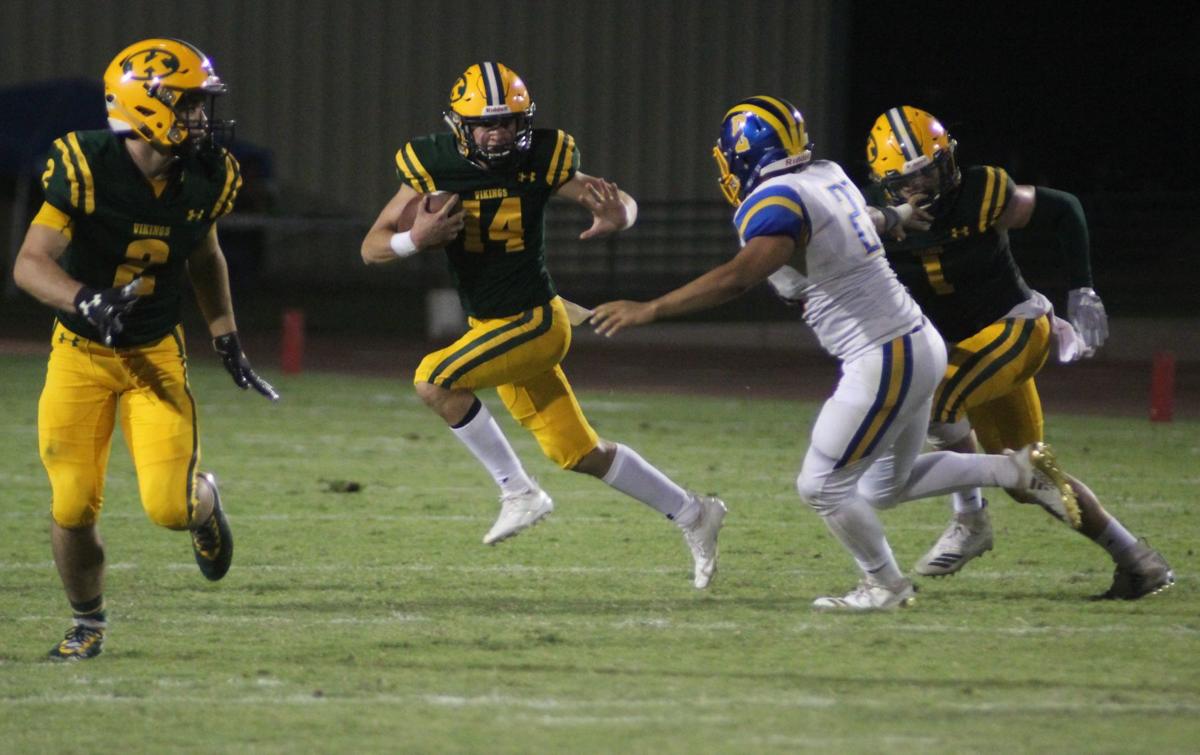 Kingsburg's Travis Hall (14) returns a kickoff against Exeter during the Vikings homecoming game on Sept. 28.

KINGSBURG - After playing on the road for the last three games, the Kingsburg football team put on a show for the home crowd at its homecoming game in a 52-30 victory over Exeter High School in the Central Sequoia League opener on Sept. 28.

It was the fifth-straight victory for the Kingsburg Vikings and it was also the second consecutive game that the team scored at least 50 points.

“We got big plays, we ran the ball, we threw the ball,” Kingsburg head coach David Wilson said. “We came out and we’re clicking and playing with a lot of confidence.”

For Vikings running back Bo Jackson, it was a special night as the senior was crowned homecoming king and scored three touchdowns on the ground.

“I watched a couple of my cousins win homecoming queen, and I watched Kingsburg football my whole life,” Bo Jackson said. “So it's a pretty surreal day, my last homecoming game at Kingsburg stadium.”

Despite being crowned homecoming king, he said his main focus of the night was the game against the Exeter Monarchs.

“Once I was crowned king, I didn’t think about winning it,” Bo Jackson said. “I was totally focused on the game. I’m so proud of our team. We came together well and we did what we needed to do tonight.”

As for the football game, the Vikings offense started fast, leading 26-0 at the end of the first quarter. Kingsburg scored four touchdowns in the quarter and Jett Jackson was responsible for three of them. The sophomore quarterback threw for two touchdowns and ran for one.

In the second quarter, the Vikings scored three more touchdowns, which would all be on the ground. In the quarter, Blake Spomer rushed for two of his three touchdowns and Bo Jackson had one of his three scores.

Kingsburg went into halftime leading 45-0, the second straight game the Vikings scored 40 points and shut out its opponent in the first half.

As for the defense, Kingsburg forced a turnover for the fifth-straight week. The Vikings forced the Exeter Monarchs to turn the ball over twice and allowed 4.7 yards per play. The Monarchs offense scored 22 of its points in the fourth quarter when the game was already out of reach.

“Overall, we just have to keep coming out strong and finishing until the end,” Kingsburg linebacker Cole Dias said about the Vikings' defense. “So [we have] to keep going 100 percent.”

Kingsburg’s next game will provide a tough test when the Vikings host Central Valley Christian on Oct. 5.

Both Kingsburg and CVC will enter the matchup at 5-1 overall and 1-0 in CSL play.

Like the Vikings, the CVC Cavaliers have won five straight games and are one of the highest scoring teams in the CSL. In their five-game winning streaks, CVC has averaged 39.4 points a game and Kingsburg 44.4.

“It’ll be a challenge for us, but that’s why we play these games” Wilson said about CVC. “I’m excited to unleash these guys ... and you don’t call them young guys anymore because they’re six games in, but still this is their first big game since [San Joaquin] Memorial.”

The Vikings are scheduled to kick off against the CVC Cavaliers at 7:30 p.m.

Kingsburg running back Bo Jackson (42) runs with ball inside the red zone during the Vikings homecoming game against Exeter on Sept. 28. Jackson scored three touchdowns on the ground against the Monarchs.

Kingsburg quarterback Jett Jackson (5) rushes into the end zone for a 9-yard score against Exeter during the Vikings homecoming game on Sept. 28. Jackson had three total touchdowns (two passing, one rushing) against the Monarchs.

Kingsburg's Travis Hall (14) returns a kickoff against Exeter during the Vikings homecoming game on Sept. 28.