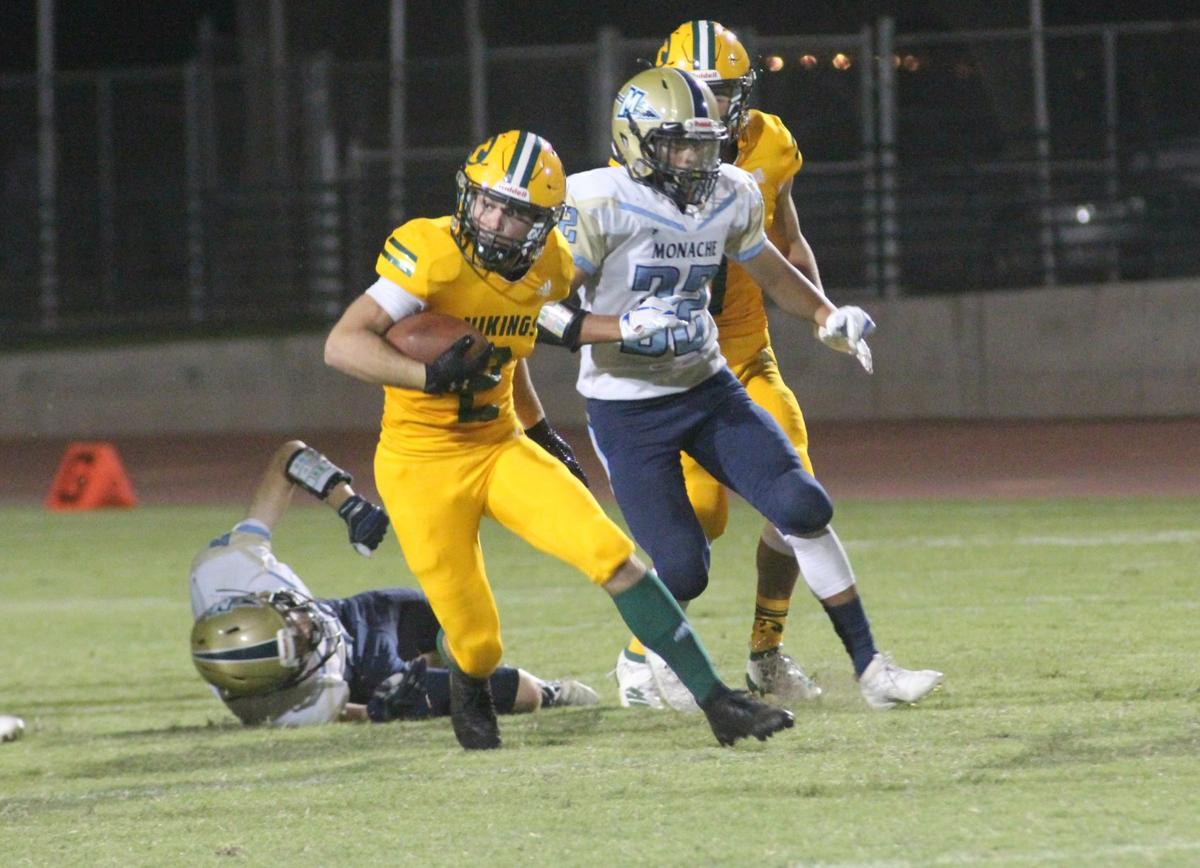 In this Sept. 11, 2019 Enterprise Recorder file photo, Kingsburg running back/receiver Blake Spomer makes a cut during the third quarter of a non-league game against Monache at Kingsburg High School on Sept. 6. Spomer was named the 2019 Central Sequoia League Most Valuable Player. 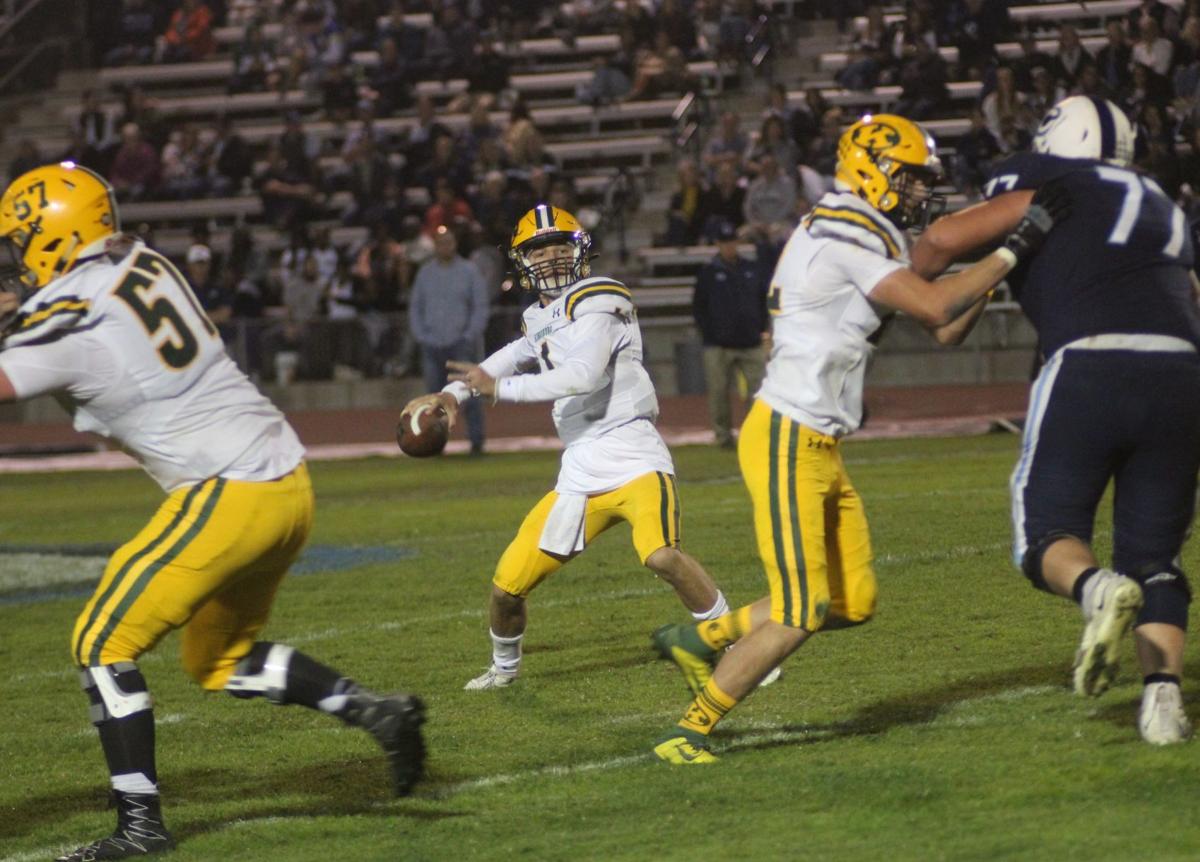 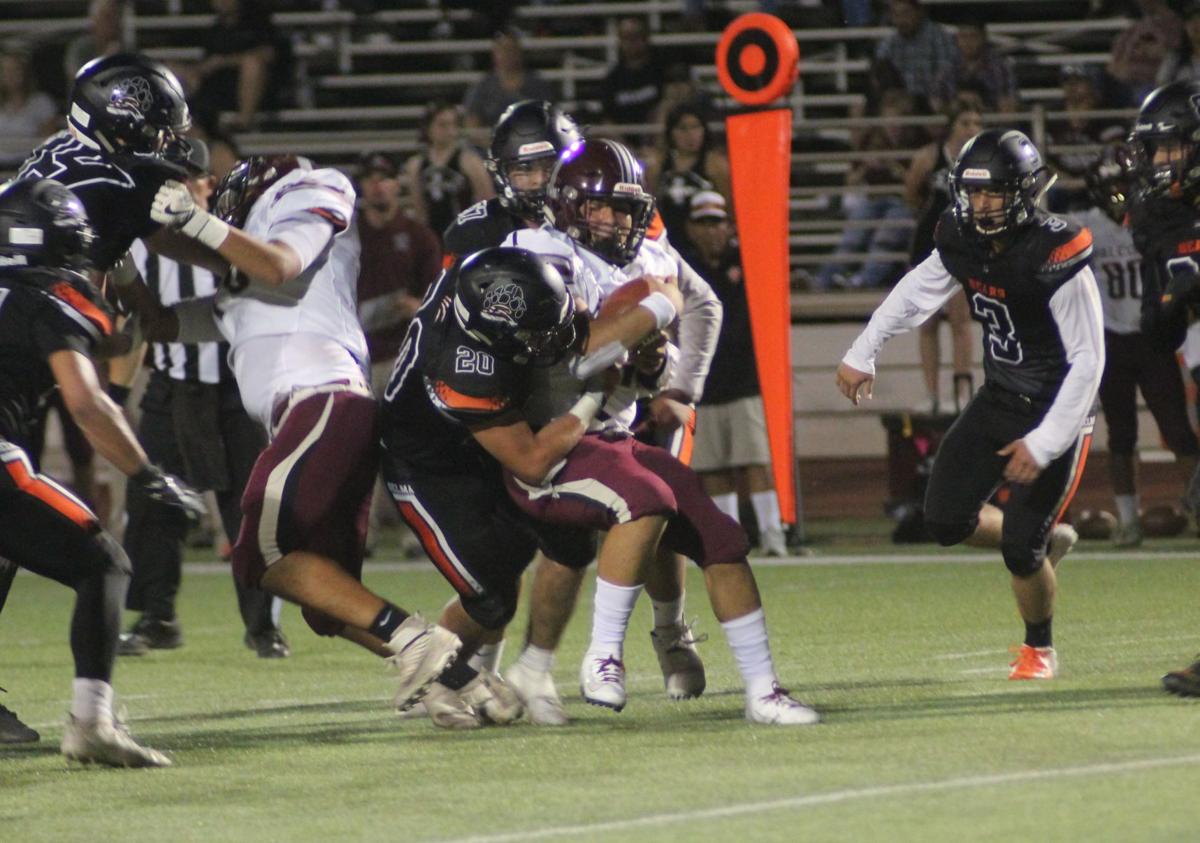 In this Sept. 11, 2019 Enterprise Recorder file photo, Kingsburg running back/receiver Blake Spomer makes a cut during the third quarter of a non-league game against Monache at Kingsburg High School on Sept. 6. Spomer was named the 2019 Central Sequoia League Most Valuable Player.

The Kingsburg and Selma football teams finished as the top two teams in the Central Sequoia League and were well represented on the All-League list for the 2019 season.

Blake Spomer of the Vikings was named the league’s Most Valuable Player while his teammate Travis Hall earned the CSL Offensive Player of the Year. Kingsburg coach David Wilson was named Coach of the Year after leading the Vikings to a CSL title with a 5-0 mark along with a perfect 10-0 record in the regular season. It was the first time the Vikings went 10-0 in a season since 2009.

“Of course when you have really good players, as a coach you always get recognized because you got good players.”

“When you look at who has a huge impact on a lot of our success, he just always seem to show up,” Wilson said about Spomer. “I think you take pride in those things because those positions are all voted on by the other coaches. It truly means the other teams are taking notice.”

Hall, who filled in quarterback in the Vikings seventh game of the season, passed for 770 yards and gained 153 yards on the ground in four CSL games. In that time span, he was responsible for 10 touchdowns - seven passing and three rushing. Hall started the team’s final five games of the season after starter Jett Jackson tore his Anterior Cruciate Ligament against Exeter on Oct. 4.

“Travis, of course coming in midseason, his stats were just real gaudy,” Wilson said. “He had some fantastic games against CVC, Dinuba, he played outstanding against Selma on the biggest stage. He was far the best when it came to his statistics for throwing yards.”

Selma linebacker Adam Rodriguez was named Defensive Player of the Year on top of earning Second Team honors as a running back. In five CSL games, Rodriguez recorded 20 total tackles as the team’s middle linebacker and rushed for 526 yards and six touchdowns on 78 as the power back of the Bears Wing T offense.

Selma coach Matt Logue said it was an award that was “well deserved.”

“He’s just always been the guy that kind of is the coach on the field for us and help guys get lined up and get us to the right calls,” Logue said. “It showed me how much he meant to our defense this year at that Madera game when we only given up six points and he went out at the first drive of the second half and we ended up winning 42-35. We were a disaster without him out there. He’s meant a lot to our team as a whole, but to our defense...he was the guy everyone could lean on to make sure where they knew where to be.”

The Bears had a league-high 11 total selections while the Vikings were second at 10.

Blancas was also a first teamer on special teams at the all purpose position and earned Second Team recognition as a receiver.

“Overall, I thought we were represented and it was pretty good for being second in the league and the team that wins the league usually has the most guys on All-League,” Logue said. “I thought most of the guys who deserved something got it.”

Rodriguez and Blancas were the only offensive players from the Bears to make the Second Team. Kaden Tate (wide receiver) and Bohdi Gonsalves (offensive line) of the Vikings earn Second Team honors on offense.

Dinuba and Central Valley Christian tied for the third most selections at nine, following five from Exeter and two from Hanford West. Keantre Davis of the Huskies was the lone Hanford West name on the list, earning Second Team honors as a defensive back and First Team recognition at special teams.

The lineman of the year honor, one of the league’s top awards, went to Dirk Nelson of CVC.

Kingsburg ended the season at 10-1 after an upset 29-22 loss to CVC in the CIF Central Section Division III quarterfinals.

Selma concluded its season at 11-3 overall and 4-1 in the CSL. The Bears were the Division IV champions after a 35-21 victory over Washington Union in the title game. All 14 of Selma’s games were played on the road due to the reconstruction of Staley Stadium.

Selma’s 2019 campaign ended with a 42-29 loss Highland of Palmdale in the CIF Southern California Division 4-AA Regional Championship on Dec. 6. The Bears’ 11 wins were the most the program has won in a single season since 2016.