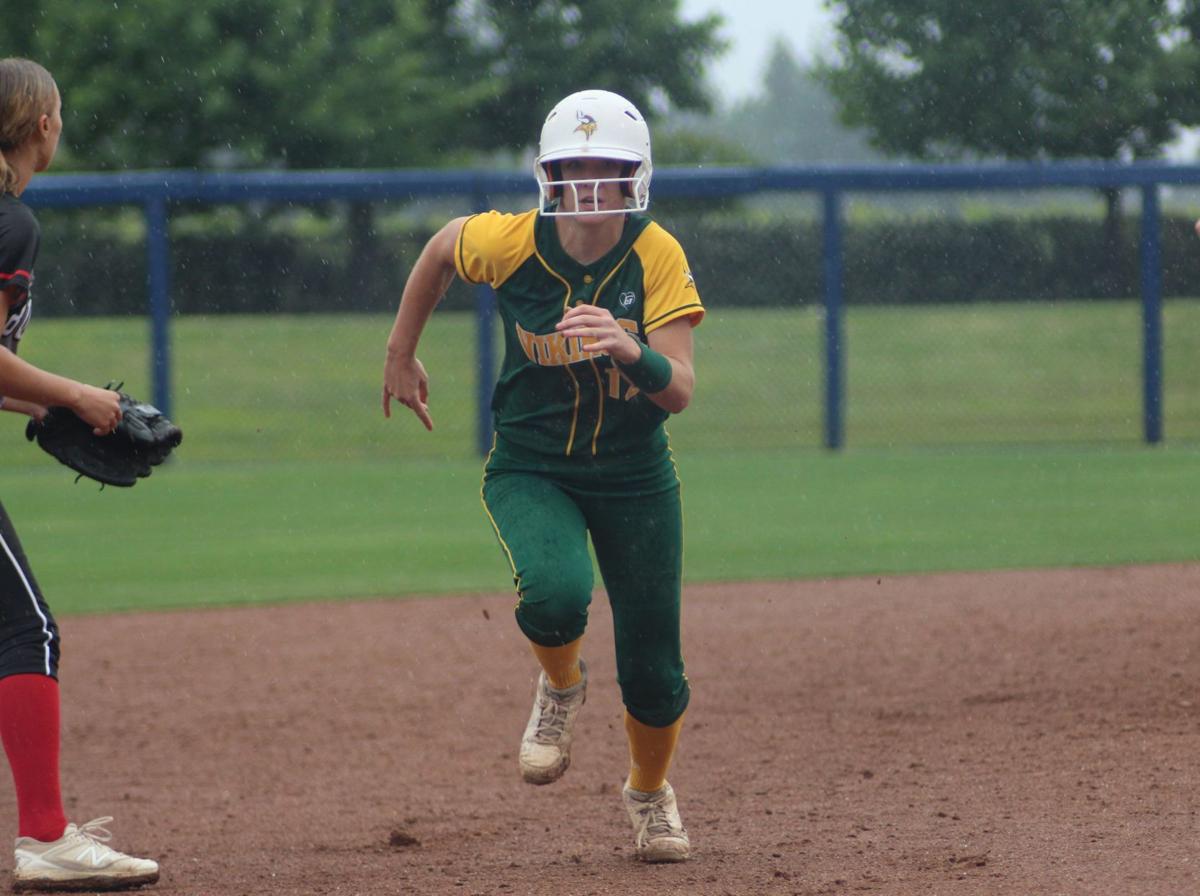 In this Enterprise Recorder file photo, Kingsburg catcher Marissa Gonzalez runs to third base during the fifth inning of the CIF Central Section Division II Championship against Hanford at Margie Wright Diamond on May 18. Gonzalez led the Vikings in home runs (11), RBIs (54), hits (50) and batting average (.500) as a sophomore in 2019. 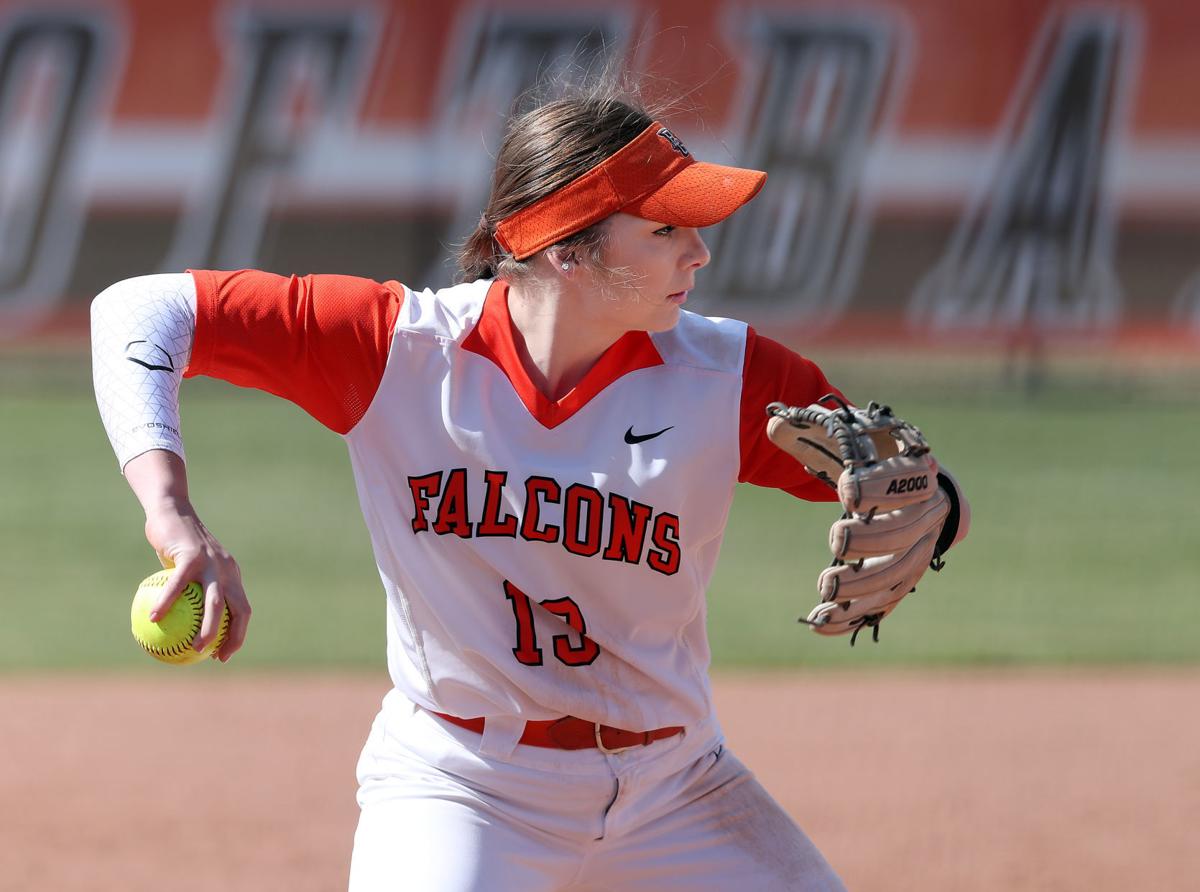 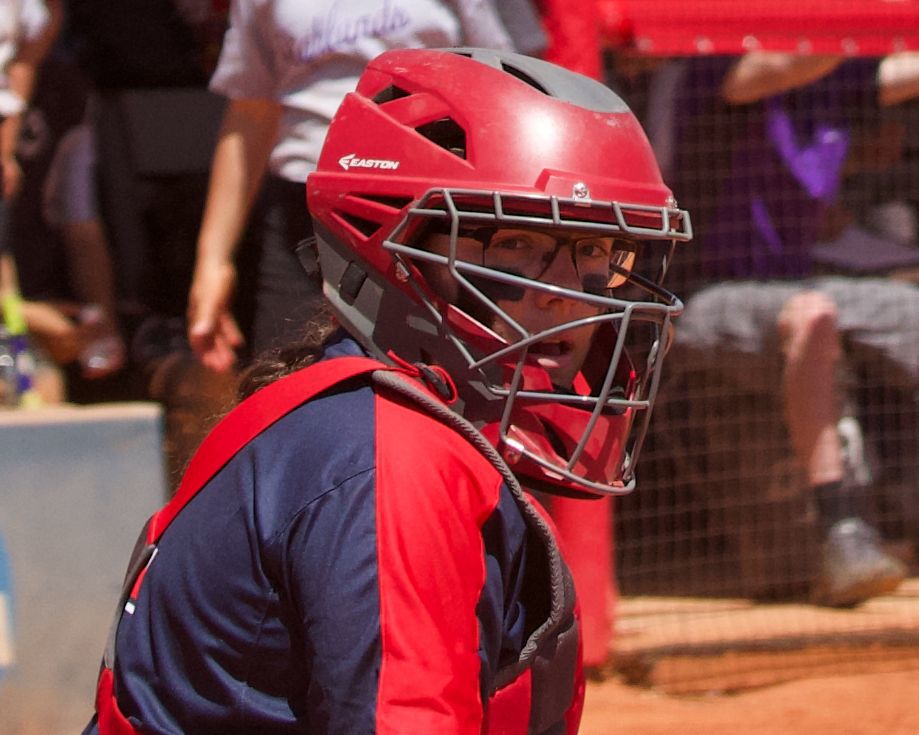 Former Kingsburg catcher Jessica Gonzalez - the second oldest of the Gonzalez sisters - recently completed her senior season for the Dixie State Trailblazers in 2019. Gonzalez held the Vikings' all-time hits record at 147 until her sister Sarah Gonzalez eclipsed the mark in 2017.

KINGSBURG - Heading into high school, following in her sisters’ footsteps was a compelling task for Marissa Gonzalez, but after two years as a Viking, she has become one of the Valley’s elite hitters on the softball diamond.

According to MaxPreps, Gonzalez led the Central Section in RBIs, along with the third most amount of home runs and fourth best amount of hits in the Valley in 2019.

This past season, Gonzalez batted a .500 average with 11 home runs, 54 RBIs, and 50 hits in 30 games. She led Kingsburg in each of those batting categories. Gonzalez was named the 2019 Central Sequoia League co-Most Valuable Player after a tremendous sophomore season.

“She’s one of those special talents that only comes along so often,” Vikings head coach Randy Sieger said. “It’s not only her talent, it’s her work ethic and her attitude. She’s everything you want in a softball player or any kind of athlete. I just don’t have enough praise for Marissa.”

After two seasons as the Vikings catcher, Gonzalez - also known as “rabbit” by her teammates and coaches - is on her way to breaking the program’s all-time hits record, which was set by her third oldest sister Sarah Gonzalez, who broke the previous mark of Jessica Gonzalez - the second oldest of five sisters.

“It’s not as much pressure, it’s motivation because I see their numbers and they can’t come back and redo it, but I still have a chance to develop all mine,” Marissa said. “It kind of gives me a goal to set every season. Just try to get better.”

Through two seasons, Marissa has 87 hits, which is 62 shy of Sarah’s mark of 149. Jessica recorded her career mark at 147 hits as a four-year varsity player. Sarah also earned four varsity letters at high school.

Even though both Jessica and Sarah are the top two hitters in the program’s history, they both said Marissa has a chance to shatter their numbers.

“If anyone is going to break it, I'd rather have it be my sibling,” Jessica said about Marissa breaking the program’s hits record. “We’re really proud of her. All of us are. We knew she’ll do big things and she’s going out there and putting in all the work that she can and having huge success with her results.”

“Once I broke Jessica’s record, I knew I had to get as many hits as I can because right when Marissa hits high school, she’s out to get me, my record,” Sarah said. “It was nice while it lasted, but I try to soak it in as much as I can until Marissa comes in and takes that for herself.”

After their success on the Kingsburg diamond, both Jessica and Sarah continued their softball careers at the next level.

Jessica just completed her senior season with the Dixie State Trailblazers while Sarah concluded her sophomore year for the Bowling Green State Falcons. Jessica was the first sister to play in college after the eldest Kristine Gonzalez stop playing in high school due to a labrum injury. Jessica played catcher at Kingsburg High and Dixie State. Sarah’s primary position is third base, but has filled in at shortstop at Bowling Green.

Like her sisters, Marissa said she plans to play softball in college, and has generated interest from Pac-12 schools, including Washington, Oregon, and Arizona. She has not verbally committed to a program, but she stated it’s vital for her to stay in the West Coast to make it easier for her parents - Dan and Jennifer Gonzalez - to watch her play.

“I just like the environment of the Pac-12,” Marissa said.

Jessica and Sarah were in attendance for the Vikings’ Central Section Division II championship game against Hanford at Margie Wright Diamond on May 18. Jessica and Sarah watched their younger sister knocked in four runs during a 2-for-4 afternoon that included a bases-clearing double that put Kingsburg up 12-4 in the fifth inning. The Vikings ended up winning the championship with a 12-8 victory over the Bullpups.

“We were probably the loudest ones in the stands,” Jessica said.

Sieger said he’s known the Gonzalez family for a decade and has seen the girls’ work ethic first hand on the practice field. He has coached Marissa during the past two seasons and has also coached Sarah when she was a junior and senior. Sieger didn’t coach Jessica, but she was the catcher while his daughter Savanna pitched for the Vikings.

“Each one of them are talented in their own ways,” Sieger said about the Gonzalez sisters. “They even have a younger sister [Jocelynn] coming up too, who seems to be just as talented as them. The girls love softball and they put everything they have into it...It’s a pretty rare thing that you have that many sisters that all did the same thing and are all really talented at it.”

The game of softball has been vital for the Gonzalez sisters, who each started playing the game as children. Jessica, Sarah, and Marissa all started playing when they were five years old.

When Marissa was a child, she remembers being introduced to the game by watching her sisters practice.

“I grew up on a softball field,” Marissa said. “I was always in the wagon. I’ll be pulled around. I’ll be sitting in the wagon next to the bucket of balls watching my sisters.”

When Marissa started playing softball, she started going by the nickname “rabbit” to differentiate her with two other girls that had her name. She said another reason she was given that name was because she’ll “hop around” as a child.

“It kinda stuck,” Marissa said. “Even my parents called me rabbit in the house.”

Jessica admitted that the family gets competitive around each other, but Sarah said softball brings the family together and allows the competitiveness to friendly.

Jessica said that softball paved a way for her and Sarah to go to college, but added “I know for us it’s just always trying to be better than each other."

Marissa is continuing that competitiveness by striving for greater high school numbers than her sisters, but when she moves on to college, she wants her time as a Kingsburg Viking to be known as a positive person on and off the field.

“I’m focused on numbers, but I want to be remembered as a person, someone that helps develop the program,” Marissa said. “Hitting in the game is good, but when you go out there and see all the fans, they cheer you on, they know you by your name and get to know you, that feeling is almost better.”

Back on the field: KHS football begins workouts under Phase 1

KINGSBURG - With the future uncertain for the football season, the Vikings had a glimmer of hope when they were back on the field for conditio…

KINGSBURG - With summer vacation starting last week, the fall sports season was getting underway as usual at Kingsburg High.

In this Enterprise Recorder file photo, Kingsburg catcher Marissa Gonzalez runs to third base during the fifth inning of the CIF Central Section Division II Championship against Hanford at Margie Wright Diamond on May 18. Gonzalez led the Vikings in home runs (11), RBIs (54), hits (50) and batting average (.500) as a sophomore in 2019.

Former Kingsburg catcher Jessica Gonzalez - the second oldest of the Gonzalez sisters - recently completed her senior season for the Dixie State Trailblazers in 2019. Gonzalez held the Vikings' all-time hits record at 147 until her sister Sarah Gonzalez eclipsed the mark in 2017.