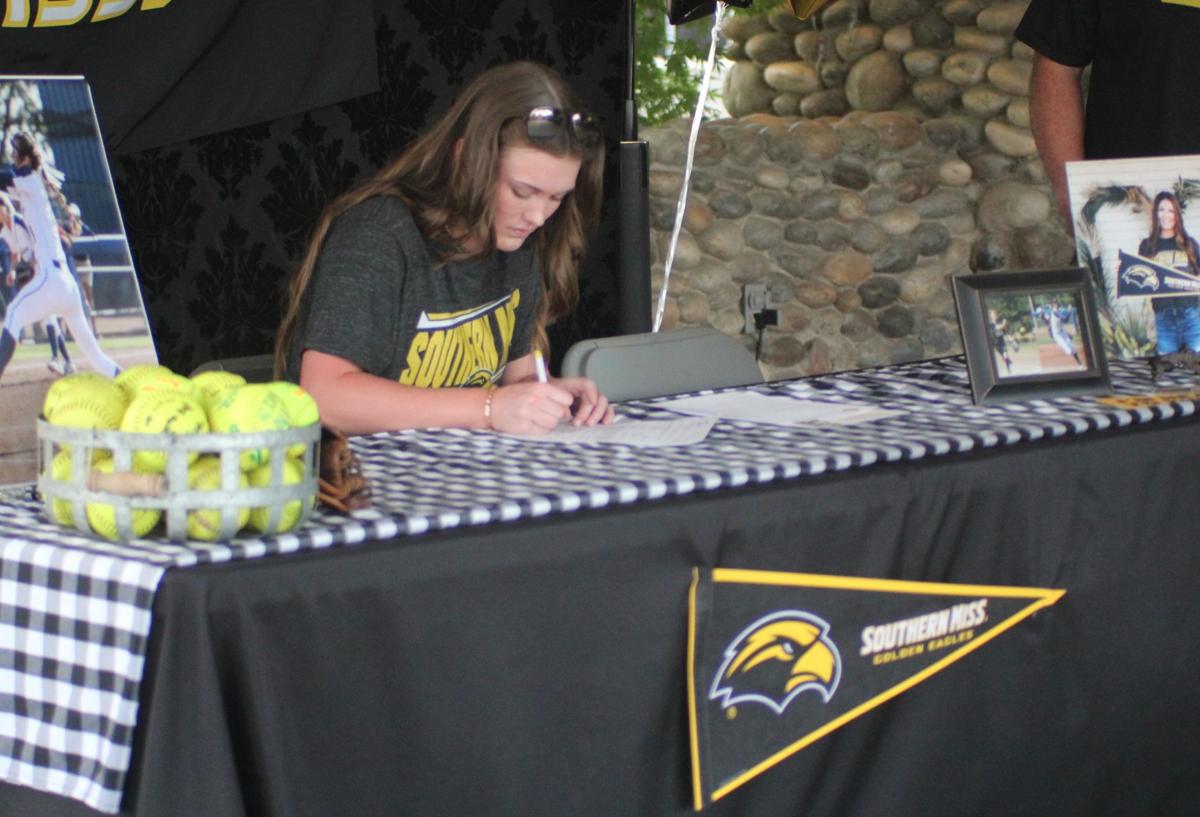 Kingsburg pitcher Rylie Atherton signs her National Letter of Intent to play softball at the University of Southern Mississippi in a ceremony at Calvary Chapel/Pipeline Church in Visalia on Friday. Atherton transferred to Kingsburg this year after playing her first three seasons at Central Valley Christian. 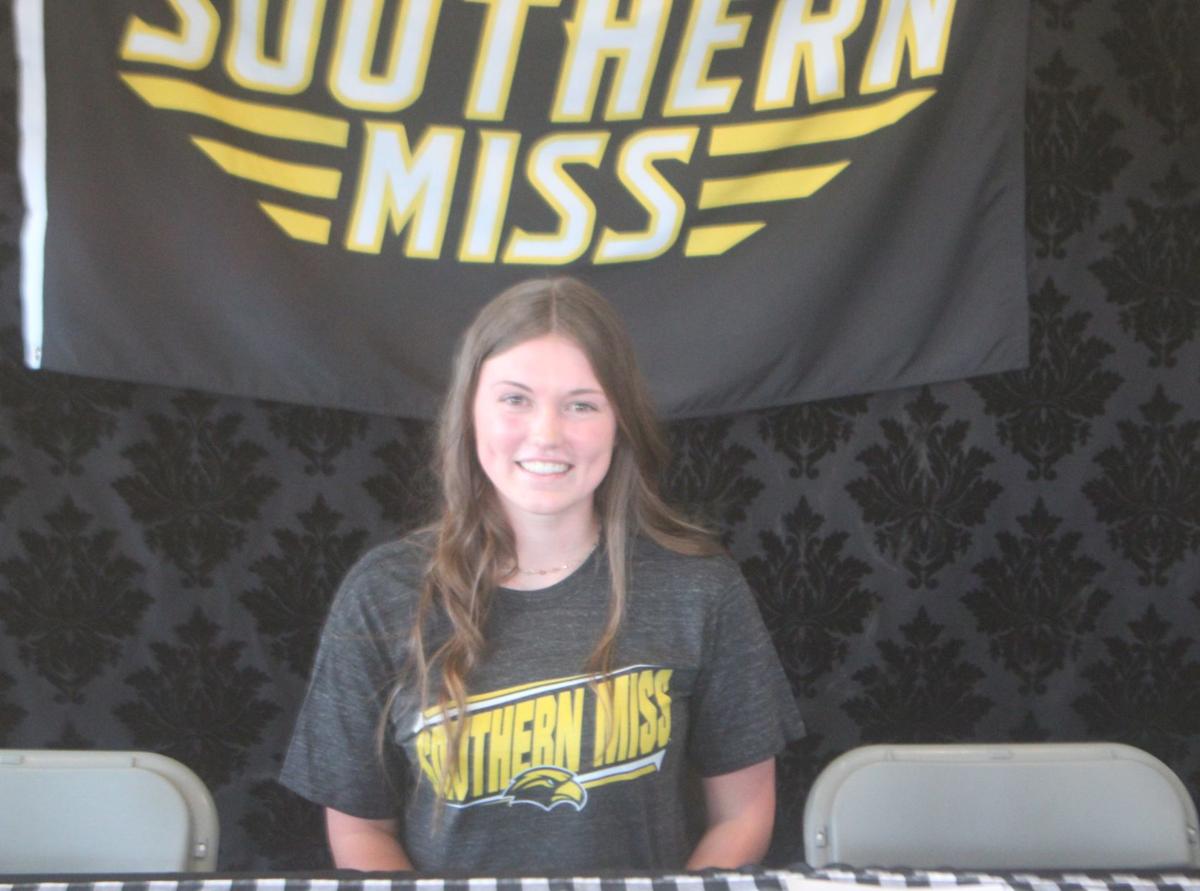 Kingsburg pitcher Rylie Atherton will join the softball team at the University of Southern Mississippi after signing a National Letter of Intent on Friday. Before transferring to Kingsburg, Atherton was 36-21 with a 1.96 ERA and 607 strikeouts and tossed 424 1/3 innings for Central Valley Christian.

VISALIA - Rylie Atherton didn’t get to pitch for Kingsburg High this year, but she’ll cherish the time she spent with her Vikings teammates before heading into the next phase of her life.

“I got to know some of the girls really well, which was fun,” Atherton said. “The practices were fun. When I was there, it was just different.”

Fortunately for Atherton, she’ll have plenty of more chances to step onto the softball diamond.

On Friday, Atherton signed a National Letter of Intent to continue her softball career at the University of Southern Mississippi. The signing occurred at an outside patio at Calvary Chapel/Pipeline Church in Visalia.

Atherton played at Central Valley Christian in her first three prep seasons before transferring to Kingsburg during her senior year. She didn’t suit up for the Vikings this year due to CIF transfer rules and the COVID-19 pandemic cutting the season short. Kingsburg went 4-2-1 in a shortened 2020 campaign.

“I was disappointed that I didn’t get to play a single game,” Atherton said. “That was really unfortunate for me. I was looking forward to playing with those girls.”

The Southern Mississippi Golden Eagles is a member of the Conference USA and the softball team was 14-8 before the coronavirus abruptly ended their season. The Golden Eagles were vying for a second straight C-USA Tournament appearance after qualifying for the first time since 2016 with a 30-win campaign last season.

“I really liked the atmosphere there,” Atherton said about her decision to attend Southern Miss. “The coaches were a really big deal to me, I really liked what they had to say. Coming from a school like CVC or Kingsburg...it seems very similar to me to the Central Valley.”

Atherton will attend the university on a partial athletic scholarship in addition to academic scholarships. She currently owns a 3.9 GPA. Atherton will major in sports management, as she aims to pursue a career with the NCAA after college.

Atherton helped lead the Cavaliers to a Central Section Division VI title in 2019 where CVC defeated Foothill 7-0. Atherton allowed two hits, four walks and struck out nine batters in a complete-game shutout against the Trojans.

After her junior season, Atherton was named the Central Sequoia League's Most Valuable Pitcher after recording a 14-10 record while registering a 0.86 ERA and 272 strikeouts in 154 ⅔ innings. Her strikeout total was tied for the ninth-most in the state, according to MaxPreps. She also pitched four no hitters and tossed seven complete-game shutouts.

During her time at CVC, Atherton always considered the Vikings to be “good competition.” She was one of two seniors for Kingsburg this season — the other being Marissa Montelongo.

“Everybody put it well when they said ‘It’s great to watch your kid work and go through what they had go through to have a resemblance of a reward at the end,’” Rylie’s father Jeff Atherton said. “A lot of her journey has had major highs and major lows.”

Rylie’s mother and former CVC head coach Cindy Atherton, admitted it’s going to be tough to see her daughter move over 2,000 miles away to Hattiesburg, Mississippi. Cindy coached Rylie from her freshman to junior seasons.

“We’re just soaking in the extra hours and the time that we’ve all got to be together,” Cindy said.

KINGSBURG - It’s been a busy spring for Kingsburg Athletics, which involved hiring a trio of coaches, Phil Bergstrom, Nate Ayers and Senny Amparan.

Ayers eager to get started in new role

KINGSBURG - After spending the last five years coaching at the middle school level, Nate Ayers will make the return to a varsity sideline.

KINGSBURG - Marissa Montelongo and Rylie Atherton didn’t get to complete their senior season, but they stepped onto the softball diamond one l…

KINGSBURG - After leading Kingsburg to a historic season, Todd Brown made the decision to resign as head coach in March.

The 66th annual City/County All-Star Football game won’t be played this year due to the coronavirus pandemic, but the rosters were unveiled wi…

Kingsburg pitcher Rylie Atherton signs her National Letter of Intent to play softball at the University of Southern Mississippi in a ceremony at Calvary Chapel/Pipeline Church in Visalia on Friday. Atherton transferred to Kingsburg this year after playing her first three seasons at Central Valley Christian.

Kingsburg pitcher Rylie Atherton will join the softball team at the University of Southern Mississippi after signing a National Letter of Intent on Friday. Before transferring to Kingsburg, Atherton was 36-21 with a 1.96 ERA and 607 strikeouts and tossed 424 1/3 innings for Central Valley Christian.