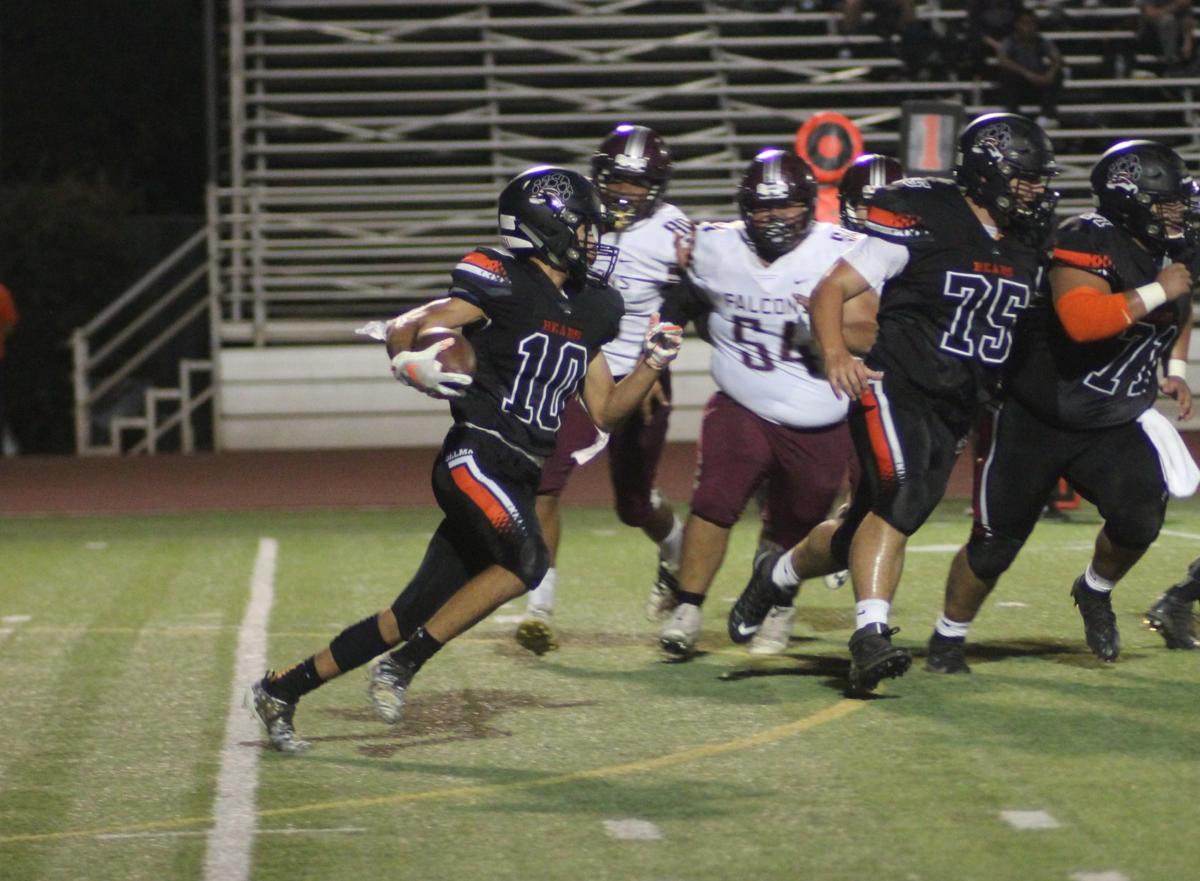 In this Enterprise Recorder file photo, Selma running back/receiver Aaron Blancas carries the ball for positive yardage during the second quarter of a non-league game against Independence High School at Sal Gonzalez Field at Reedley High School on Aug. 30. 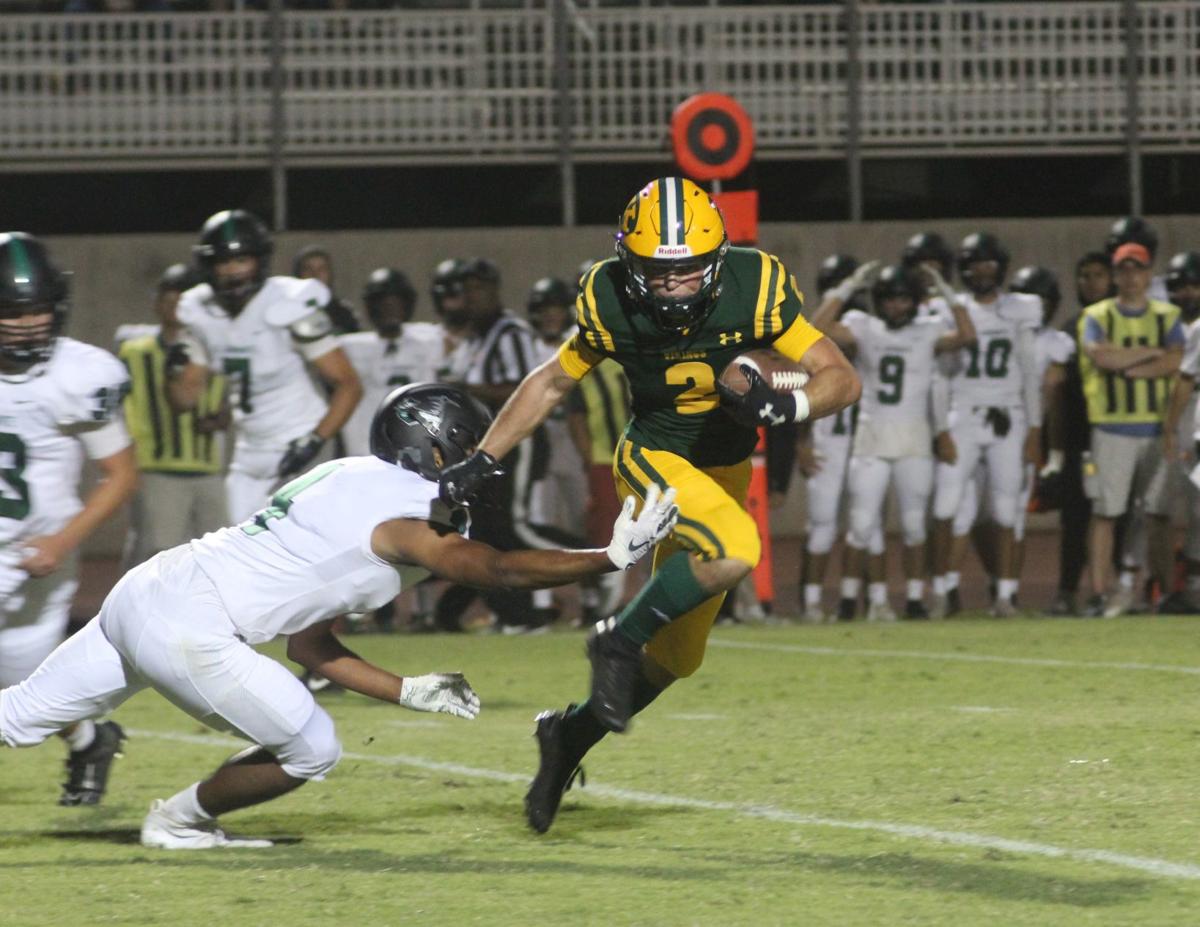 Kingsburg running back/receiver Blake Spomer avoids a tackle while carrying the ball during the first quarter of a non-league game against El Diamante at Vikings Stadium on Sept. 20.

In this Enterprise Recorder file photo, Selma running back/receiver Aaron Blancas carries the ball for positive yardage during the second quarter of a non-league game against Independence High School at Sal Gonzalez Field at Reedley High School on Aug. 30.

Kingsburg running back/receiver Blake Spomer avoids a tackle while carrying the ball during the first quarter of a non-league game against El Diamante at Vikings Stadium on Sept. 20.

With the Kingsburg and Selma football teams each coming off of a bye, both squads will begin Central Sequoia League play this week.

For either team to finish the season on top of the standings in November, they’ll each have to go through a daunting schedule that includes Central Valley Christian (3-2), Exeter (3-2), and Dinuba (2-3). Both coaches said they’re also not looking over Hanford West, who is entering league play at 1-4.

“Every week is going to be a battle,” Selma head coach Matt Logue said. “Every team in our league is pretty good.”

After the Vikings and Bears go through their CSL schedules, they’ll face each other in a rivalry matchup in the regular season finale on Nov. 1. With both teams having success early in the season, it’s possible both squads could potentially vie for a league title and a top seed in their respective divisions. The 87th meeting between the rivals was originally scheduled to take place at Staley Stadium, but due to ongoing reconstruction of the SHS venue, the game will take place at Reedley High School.

Heading into the opening week of the CSL, Kingsburg is 5-0 while Selma is 4-1.

“That’ll be a pretty cool game if we were both playing for a league championship in that last game of the year, but that’s a long ways away and there’s some good football teams before then that we have to worry about,” Logue said.

Last season, the Vikings were tri-champions of the league and shared the title with CVC and Dinuba after all three teams finished CSL play with a 4-1 record. Kingsburg’s only league loss was to the Emperors while the Cavaliers fell to the Vikings and Dinuba lost to CVC.

Both Logue and Wilson won’t count out an improved Exeter team to compete for this season's league title while they also expect CVC and Dinuba to challenge for another CSL championship.

In 2018, the Bears had a down year with a 2-3 CSL record with all three of their losses coming against each of the tri-champions. Selma’s only two wins came against Exeter and Hanford West, who had a combined one CSL win in 2018. The Monarchs went 1-4 while the Huskies were winless at 0-5.

As for this season, Logue expects his team to be a CSL title contender along with Dinuba, CVC, and Kingsburg, whom he considers as the “big three” of the league.

“Dinuba, CVC, and Kingsburg, have all been really good the last couple of years and they all have a lot of guys back that were good players,” Logue said. “I believe it was a three-way tie for them last year. It’s not going to be easy, but I think we have the team this year to compete with those guys and be in the mix and hopefully try to win a league title.”

Since Logue and Wilson started their head coaching tenures in 2015, there has either been multiple teams sharing the CSL championship or a different team coming out on top.

Before Kingsburg, Dinuba and CVC shared last year’s title, the Cavaliers were the league winners in 2015 at 3-1, followed by Selma’s 5-0 CSL championship run, which occurred during the Bears 13-1 season in 2016, and Dinuba winning the 2017 title with a perfect 5-0 record.

With each year being competitive in recent memory, this year shouldn’t be different as four of the six teams have a record that’s .500 or better including Kingsburg and Selma. While the Vikings remain undefeated, the Bears only loss this season was to the Washington Union Panthers, which ended in a 42-32 final. Kingsburg did defeat Washington Union, but it was a game that ended in a hard fought 19-13 win.

Selma will begin CSL play against Hanford West at the Neighbor Bowl in Hanford this Friday. The Huskies have struggled on both sides of the ball this season, being outscored by opponents 51-231. Kickoff is scheduled for 7:30 p.m.

Dinuba (Oct. 11), Exeter (Oct. 18), Central Valley Christian (Oct. 25), and Kingsburg (Nov. 1) will round out the rest of the Bears’ CSL schedule. All of Selma’s league games will either take place on the road or on a neutral site due to the ongoing renovation of Staley Stadium.

As the Vikings, they will start their league schedule on the road against Exeter on Friday. Kickoff for that game is set for 7:30 p.m. The Monarchs have an impressive win over Farmersville (62-0), followed by victories over Lindsay (27-21), and McLane (30-16). Their losses were to Woodlake (24-0) and Chowchilla (36-7).

“It’s always a feather in your cap when you could get through our league atop,” Wilson said. “We’ll take it one week at a time and our goal every year is to win the CSL and if you could do that, it could kind of propel you into the playoffs and that’s what we’re trying to do starting with Exeter.”