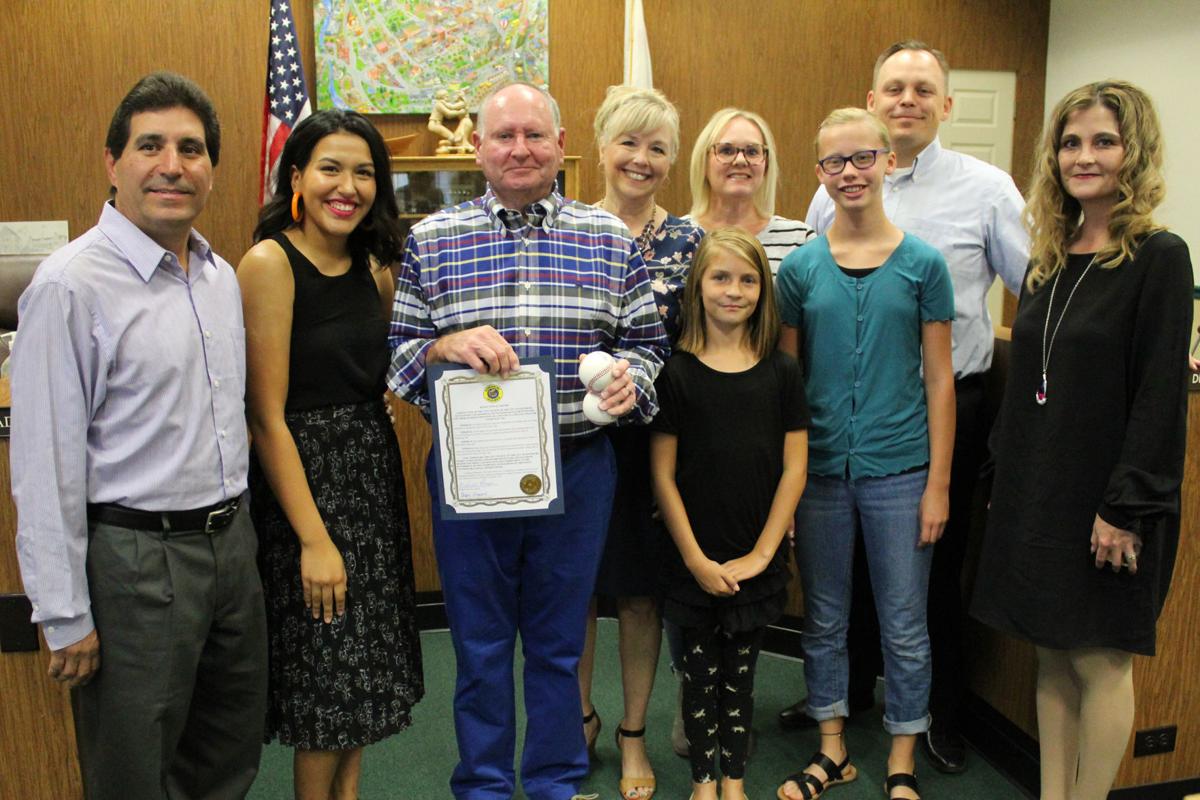 Kingsburg’s City Council thanked Steven Hash and his family, daughter Melissa Olsen and granddaughters, Annibelle and Brynlee, as the Hash family has donated 3.5 acres of land that will be used to build a Kingsburg Youth Baseball Association field. 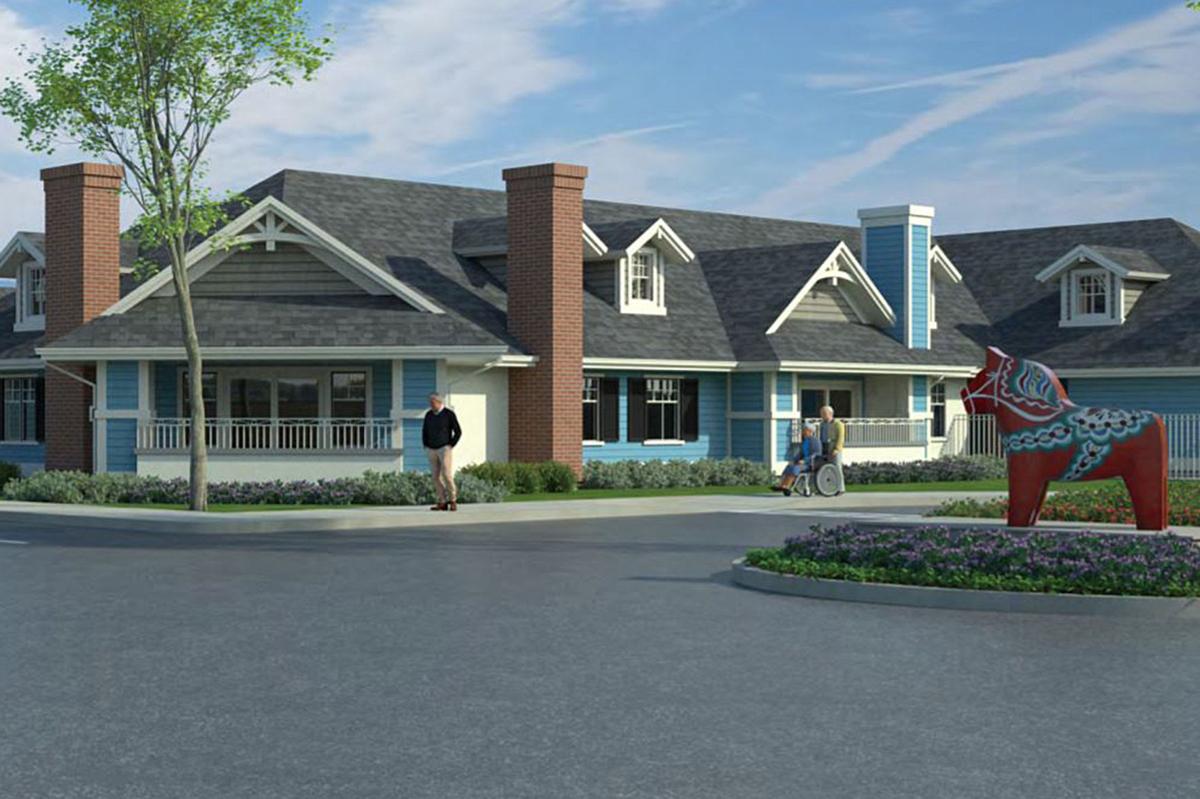 Michael Duarte with the Fresno Housing Authority gave an update on progress on the future senior housing complex that will be built across the street from the Kingsburg Historic Park. The facility will be called Linnaea Villas.

Kingsburg’s City Council thanked Steven Hash and his family, daughter Melissa Olsen and granddaughters, Annibelle and Brynlee, as the Hash family has donated 3.5 acres of land that will be used to build a Kingsburg Youth Baseball Association field.

Michael Duarte with the Fresno Housing Authority gave an update on progress on the future senior housing complex that will be built across the street from the Kingsburg Historic Park. The facility will be called Linnaea Villas.

Steven Hash and Elizabeth Shafer were thanked for donating 3.5 acres of land that will be used to construct a youth baseball field. The field will be dedicated to Hash’s father, Hank Hash. Hank Hash was Bakersfield 2030 Club’s past president, a local business owner and community leader who also played third base for Bakersfield Junior College and for a semi-professional team in Texas.

Reading from a proclamation, Kingsburg Mayor Michelle Roman said the City wanted to recognize their donation and commitment to the betterment of the Kingsburg.

“Thank you so much on behalf of the City Council and all the citizens, especially the youth who are going to just love this donation,” she said.

Steven Hash said building a baseball field with the land is especially fitting as baseball was such a big part of him and his brothers’ childhoods.

“Every night when my dad got off work, he wore a suit so he’d take his tie off, come out in his slacks and white shirt and play catch with us until dinner time every night. [Baseball] was a big part of growing up. He would love this if he were still alive.”

Hash was also thanked by Kingsburg Youth Baseball’s Association’s Steve Ramirez and Jason Garcia. Ramirez said they had Hash throw out the first pitch for their 2019 season inaugural game and wanted to be present during the City Council meeting for this recognition. They also brought some Babe Ruth - Cal Ripken baseballs from their first box to give to Hash.

“On behalf of KYBA, and we’re talking from 5-year-olds and now I can say all the way up to 15-year-olds, we’re very thankful for those 3.5 acres you’ve donated.”

Ramirez said the goal is to have initial games on those fields next season with play starting in May.

Michael Duarte with the Fresno Housing Authority said they’re working to meet the construction deadlines and have to coordinate not only with align streets with new residential construction nearby but also with the State Highway 201 to the north, an irrigation ditch to the east and the realignment of Madsen Avenue.

“There’s a lot of work to do but we’re excited to get going,” he said.

Duarte showed a rendering of the buildings with a lighter blue color scheme that will likely be what the complex looks like when it’s built. The name is derived from Sweden’s unofficial national flower.

The complex will include three structures and will have a dog park for the residents, two large outdoor courtyards with barbecues and shade structures, outdoor garden, a community center with a computer lab and kitchen, a public transit stop and sidewalks for outdoor walking.

Fire Chief Daniel Perkins gave an update on the various trainings now taking place at their department’s new training room at Station #2 for the next 18 months. Ultimately, his goal is to improve response times for their coverage areas, generate revenue from those trainings, decrease injuries, improve morale in the department, increase retention and increase positive community interaction.

City Manager Alex Henderson detailed the latest purchases made with Measure E one percent public safety sales tax funds now that there is information on three full quarters of revenue.

The expenditures, by department, to date have included:

Council also heard an update from Henderson on code enforcement issues being resolved throughout the city and each site’s current status.

In other matters, Council approved:

Improvements that will be made at the Kingsburg Senior Center with Community Development Block Grant funds.

A roof-mounted solar system and battery backup will be installed. Worn flooring throughout the building will also be replaced.

Updated the trolley rental fees and schedule. The rate will be $125 an hour with a minimum rental of two hours. After four hours, the rate drops to $75 per hour. Rentals during City holidays will be $140 per hour. Nonprofits will be charged $60 per hour. A security deposit is $250.

The closure of Draper Street for a Downtown football rivalry game pep-rally from 1:45-3:15 p.m. Nov 1. Amplified speakers will be used and a semi-trailer used as a part of the event. Parking in front of City Hall and West America Bank will be restricted at 12:30 p.m. At approximately 1:45 p.m. the semi-trailer will be driven across the east side of Draper and Marion Street intersection. At that time, Draper Street, from Smith to Marion streets, will also need to be blocked off from traffic.

Approved hiring the engineering firm of Provost and Pritchard to design water treatment facilities for City wells 12 and 13 to treat water for trichloropropane as the California State Water Resources Control Board has deemed the TCP levels as exceeding the maximum contaminant level.

Kingsburg has seven well sites that provide the water supply for the city’s water distribution system. In 2017, the California State Water Board updated the maximum contaminant level (MCL) for the chemical 1,2,3 Trichloropropane also known as TCP. Wells 12 and 13 had test results that exceeded the MCL for TCP. The water board has issued a compliance order which requires the City to either provide treatment facilities to reduce the TCP levels to below the MCL or discontinue use of the wells. The City cannot adequately supply the water needs of the communities without these wells operational. Thus, the City is proposing to construct TCP treatment plants at these two well sites.

Well 12, located on a triangular-shaped site that is bounded by Lincoln, Earl and Eighteenth streets, has inadequate space for construction of an on-site treatment plant. This well will be treated at a remote location. The proposed treatment location is an orchard south of Kern Street (Avenue 396) across from Lincoln Elementary School.

Well 13, located west of 10th Street and north of the Ventura Street alignment, is next to a heavily vegetated storm water / recharge pond. There is not enough room to construct a treatment plant on the site without reclaiming a portion of this pond. Thus, the proposed treatment location is a vacant parcel located south of the pond just off of 10the Avenue.

The City will use monies in its water fund to finance the water treatment plant improvements.

The project is expected to take about one year to complete.

Read the agendas of the Kingsburg City Council online at http://cityofkingsburg-ca.gov/AgendaCenter.