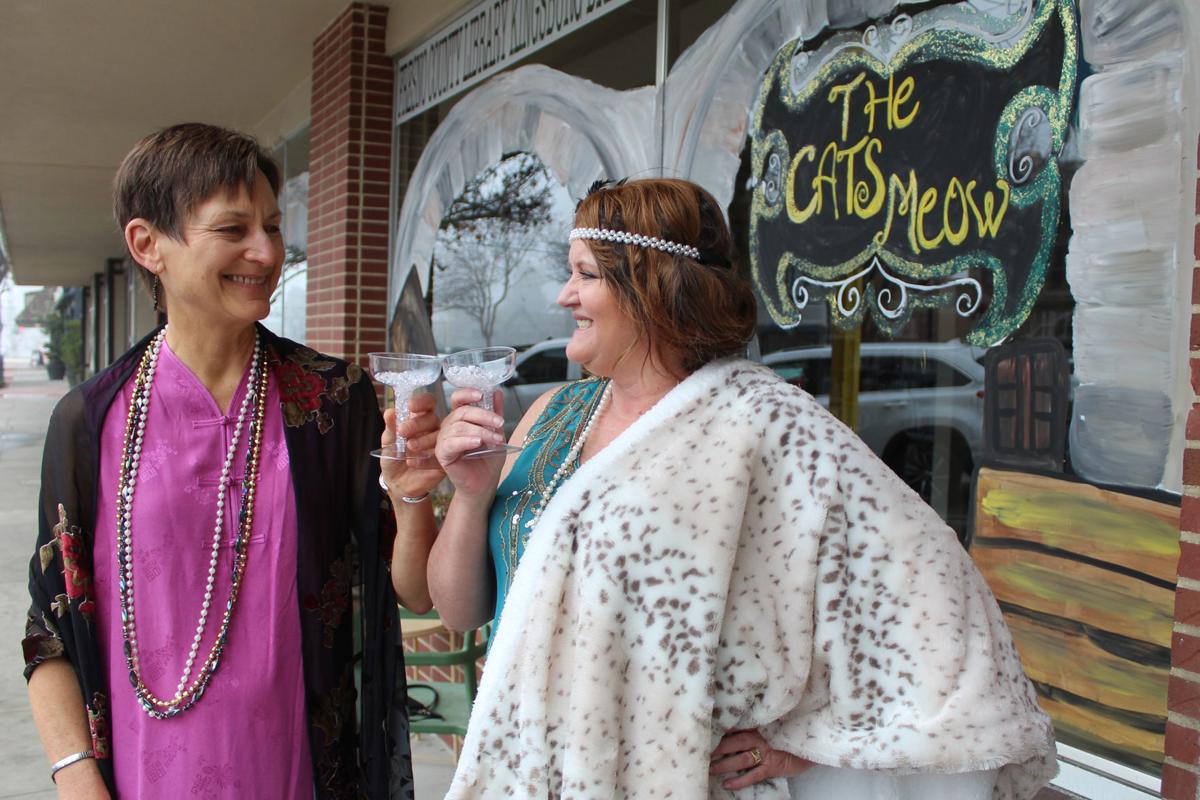 Kingsburg Friends of the Library President Linda Sward and senior library assistant Shonda Graham dress in period clothing as they prepare for the branch’s first-ever interactive mystery, “Murder at the Cat’s Meow.” Tickets are a $5 donation. 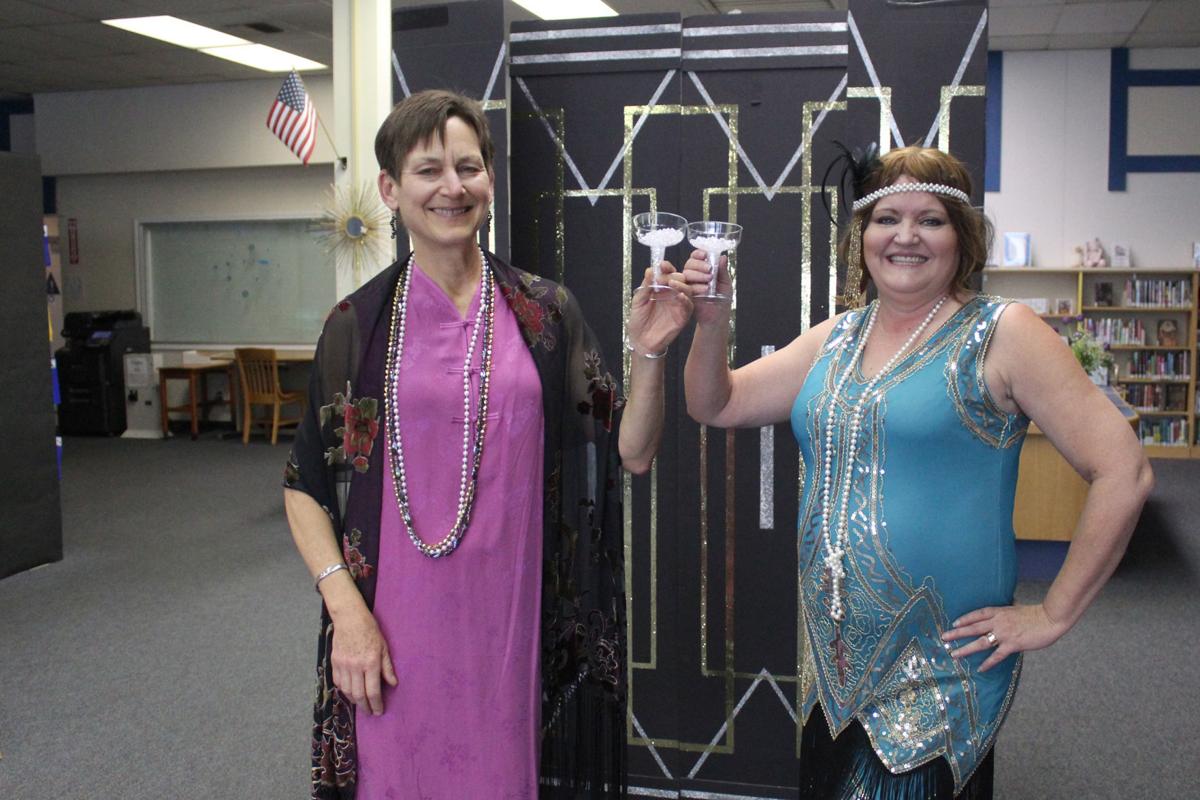 The Friends of the Kingsburg Library are hosting “Murder at the Cat’s Meow” which starts at 6 p.m. Saturday, Jan. 18 at the branch, 1399 Draper St. Admission is a $5 donation. The event will help the volunteer Friends group raise funds to buy new furniture for the Kingsburg branch.

Kingsburg Friends of the Library President Linda Sward and senior library assistant Shonda Graham dress in period clothing as they prepare for the branch’s first-ever interactive mystery, “Murder at the Cat’s Meow.” Tickets are a $5 donation.

The Friends of the Kingsburg Library are hosting “Murder at the Cat’s Meow” which starts at 6 p.m. Saturday, Jan. 18 at the branch, 1399 Draper St. Admission is a $5 donation. The event will help the volunteer Friends group raise funds to buy new furniture for the Kingsburg branch.

KINGSBURG – If you like solving problems and piecing together clues, you’ll enjoy the entertaining challenge presented by the Friends of the Kingsburg Library.

The Friends are hosting their first interactive mystery for adults, “Murder at the Cat’s Meow.” The murder-mystery starts at 6 p.m. Saturday, Jan. 18 at the branch, 1399 Draper St. Admission is a $5 donation and those interested in attending are encouraged to purchase tickets at the branch in advance as space is limited. There are also still a few roles open for participants who would like to take on a specific character in the mystery.

The small but active Friends group hosts a number of events already and raises funds to collaborate with activities taking place at the library.

This latest event will help fund the purchase of new furniture to replace chairs that are decades old.

Senior library assistant Shonda Graham and Kingsburg Friends of the Library President Linda Sward are coordinating the event. Sward will serve as the narrator and read an introduction to everyone that night. There will be two acts.

“It’s a murder-mystery party where guests take the roles of staff, entertainers and guests at a party held at a jazz club, The Cat’s Meow. It’s set in the 1920s in New York City. We’ll play the characters throughout the course of the event. At some point, one of the guests is going to be killed.”

Graham said “even the character players don’t know which one of them did it.”

There are about 15 assigned roles, but others may come as guests who’ll spend the evening mingling, asking questions and piecing together clues to figure out who has killed one of the guests.

Graham said she’s attended murder-mysteries, and although they can be simple board games with the family, they can also be elaborate functions.

“One of the ones I attended was a murder-mystery with dinner on the train at Sugar Pine Railroad. Adults are getting more into role-playing and it’s fun to dress up and be someone else. It’s like ‘Murder on the Orient Express’ where nobody knows who did it until the very end. It’s one of those things where it’s great audience participation for the players and people involved. Everybody’s included in this.”

Sward said she hopes the event also highlights all the services available at their local branch.

“Many people don’t think of the library any more, but there are so many services the library offers that most people, including myself, don’t realize, unless you go on the website. You don’t see that there’s all these services on the website and for free.”

The Friends group has sponsored the murals designed by local artist Maxine Olson that now grace the building’s east wall. They’ve also funded the Early Learning Center and children’s activities, U.S. Citizenship swearing-in ceremonies, events for preschoolers and teens at the branch, Kingsburg Reads One Book events, raffle baskets, movie licenses and even wireless printing, which isn’t available at even some of the larger regional Fresno County branches.

Since Kingsburg’s is a smaller branch, they often make do with loaned furniture from the larger branches and so the latest goal is to replace chairs that look good but have been used for more than two decades.

“One of the biggest things we’ve asked for recently is the furniture,” Graham said. “They look comfortable, but they’re really not. Let’s say, the spring has sprung. That’s what this (murder-mystery) will subsidize. The big chunk of money the Friends have already put forward.”

Graham added, she too, would like residents to come in and see what’s available at the local branch, especially if they haven’t visited in a while.

“We’re trying to let people know we are part of the community and that there are reasons to come to the library besides just to check out a book. We also have newly-released movies.”

Costumes are encouraged for the murder-mystery, but not required.

Women can wear hairbands with feathers and attire with fringe and men can wear a bowtie, suspenders, fedoras or sleeve garters to add a touch of the Roaring 1920s to their outfit. The event is for those 18 and older.

What breed of puppy is perfect for you?