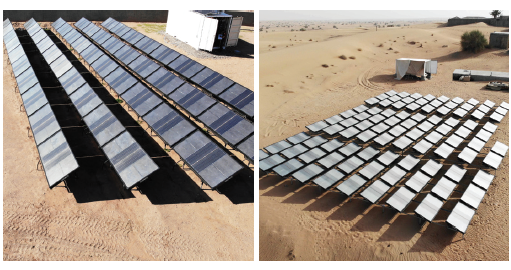 'Water Farm' for one of Valley’s driest spots - Allensworth

At one time Allensworth in southern Tulare County sat at the edge of Tulare Lake and enjoyed springs of artesian well water. A bright future was envisioned for this African American community.

But that never happened. Then in 1966, the state of California discovered high levels of arsenic in the drinking water. Most residents left, but 34 families remained, leaving Allensworth all but a ghost town.

Now like other land around Corcoran, farmland around Allensworth is sinking from overpumping of groundwater by farmers in the region.

Lack of clean water has affected the future. It will be 106 degrees this week in town and everything is drying up.

Now an Arizona company wants to build a "water farm" that could provide clean drinking water pulled from the air.

The severity of the drought has pushed Californians to experiment with all kinds of new technology to make new runs at the problem from fog catcher walls to small offshore desal units the size of a large buoy and now hydropanels, that work like solar panels but generate water - not electricity.

The company - Source Global - has applied to the Tulare County Planning Commission for a special use permit to erect 640 hydropanels near Allensworth on land owned by John Hancock Life Insurance Company.

Expected to be approved June 8, the applicant says it will provide farmworkers with both drinking water and ice paid for by an employer. An anticipated 200-350 farm laborers will benefit from the water production. The 1.6 acre site is located at Road 80 and Avenue 16, Earlimart near Allensworth.

Kings County saw a 19% voter turnout in the June primary, better than the state average at 16% at this count. Tulare County reported just a 10% turnout.

- Valadao vs Salas this fall: The race for the congressional seat in the 22nd District will feature Democrat Rudy Salas and the GOP’s David Valadao, the top vote getters in this week’s primary.

- Verboon, Neves, Robinson to lead BOS: Kings County Board of Supervisors will seat Doug Verboon, Joe Neves and newcomer Rusty Robinson as a result of this week’s election.

- Hurtado vs Shepard in State Senate District 16 race: Melissa Hurtado easily beat out Nicole Parra on the Democrat side and will face off with Republican David Shepard this fall.

As for beef, Rabobank says “the first signs of softening consumer confidence are apparent in most markets, with wholesale prices for beef coming under pressure even though production costs are higher. A downward adjustment of cattle prices and upstream input costs will be needed to restore processor margins and to maintain beef’s competitiveness with consumers. We expect ongoing adjustments of consumption and margins in all markets as we head into Q3 2022.”

For now, cattle values are significantly higher this year, with steer prices netting 17.5% more at slaughter than last year.

And for No. 1 Kings crop - milk - dairy farmers are happy to see all-time high milk prices at $25.21 per 100 pounds of milk - over $6 higher compared to last year. Meanwhile margins may be moderating, says Western United Dairymen, based on nearby futures prices.

But these lofty dairy product prices may erode consumer’s appetites and dairy futures price are trending down in a break for costomers. In May USDA said the "all-milk price forecast for 2023 is $23.55 per cwt, $2.20 lower than 2022 projection. Higher milk supplies projected in 2023 and relative stable demand are expected to contribute to lower prices for the main dairy products compared to 2022 projections," says USDA. The agency projects the national dairy herd to increase.

Valley-based Foster Farms, a family-owned poultry producer, has sold its operations to a conglomerate - Connecticut-based Atlas Holdings announced on June 7. Foster Farms acquired many of the ranches in Kings County, formerly owned by family-based Zacky Farms.

Afterward, Foster Farms indicated it wanted to reopen and modernize the ranches and raise chickens including free range. We will see if they follow through under the new owners.

As of May 15, California’s tomato processors reported they have or will have contracts for 11.7 million tons of processing tomatoes for 2022. This production estimate is 4.1% lower than the January intentions forecast of 12.2 million tons, but 8.9% above the final 2021 contracted production total.

A sprawling 1.1 million square-foot warehouse under construction since last year and now nearing completion, is just north of the existing Amazon Fulfillment Center and Riggin. The huge tilted concrete building is located on Ave 320, a mile north of Riggin, on a street that now carries the name of Kibler by the city. On Visalia city permits the address of the project is listed as 8817 W Kibler.

Formerly this country lane saw little traffic but now trucks carrying construction supplies often clog the two-lane road. The big building makes an impressive half mile silhouette viewed from Plaza Drive from cars moving along the north entrance of the industrial park prompting many gawkers to wonder - 'Hey, what’s that?'

Conventional wisdom has said 'that would be another Amazon.' Since the company is typically closed-lipped on these matters - as they were the first time that Amazon landed in Visalia in 2021 - our latest conclusion would be understandable and turns out to be correct. Now several issued building permits with the address 8817 W Kibler are listing Amazon as the tenant.

Asked if that was true, Amazon spokesperson Natalie Wolfrom did not deny it and instead waffled in an email “No update on this. Will have more to share hopefully in August. I’ll circle back then!”

Reliable sources say Amazon expects to take occupancy of the new facility this fall with the goal to be in business in time for the holiday season this year.