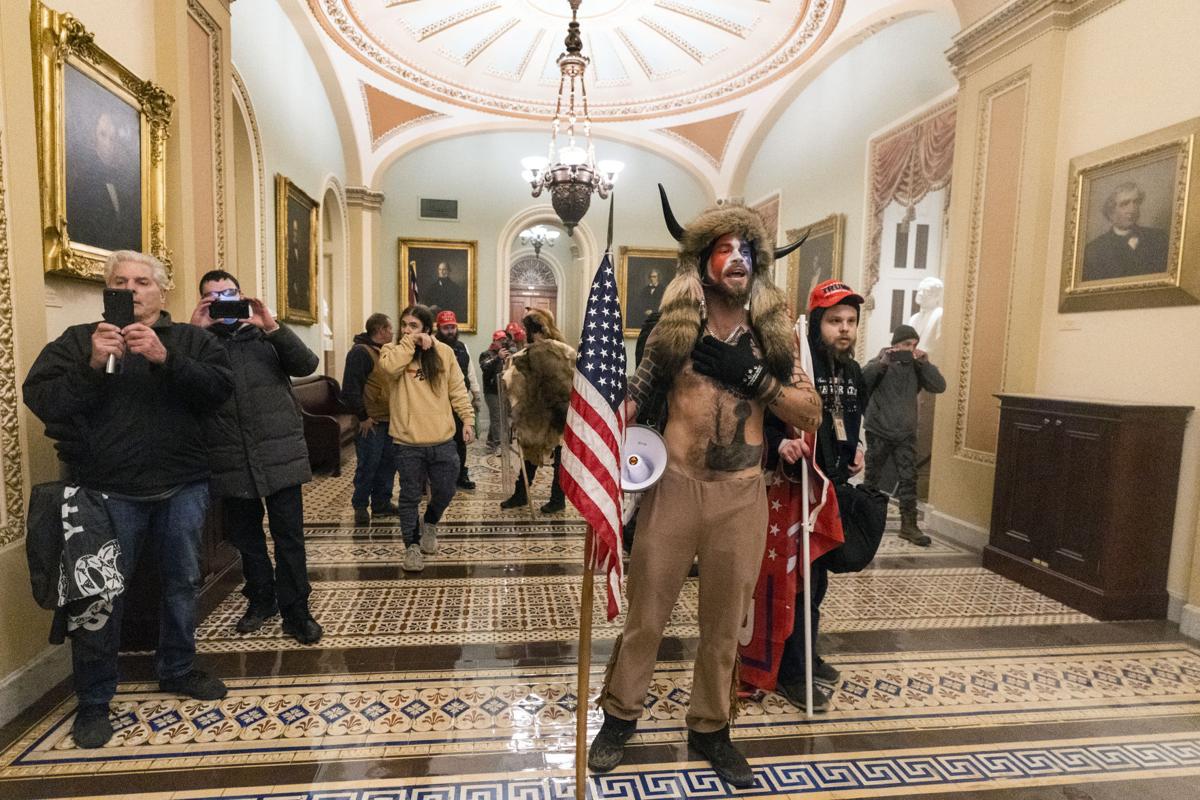 Supporters of President Donald Trump are confronted by Capitol Police officers outside the Senate Chamber inside the Capitol, Wednesday, Jan. 6, 2021 in Washington 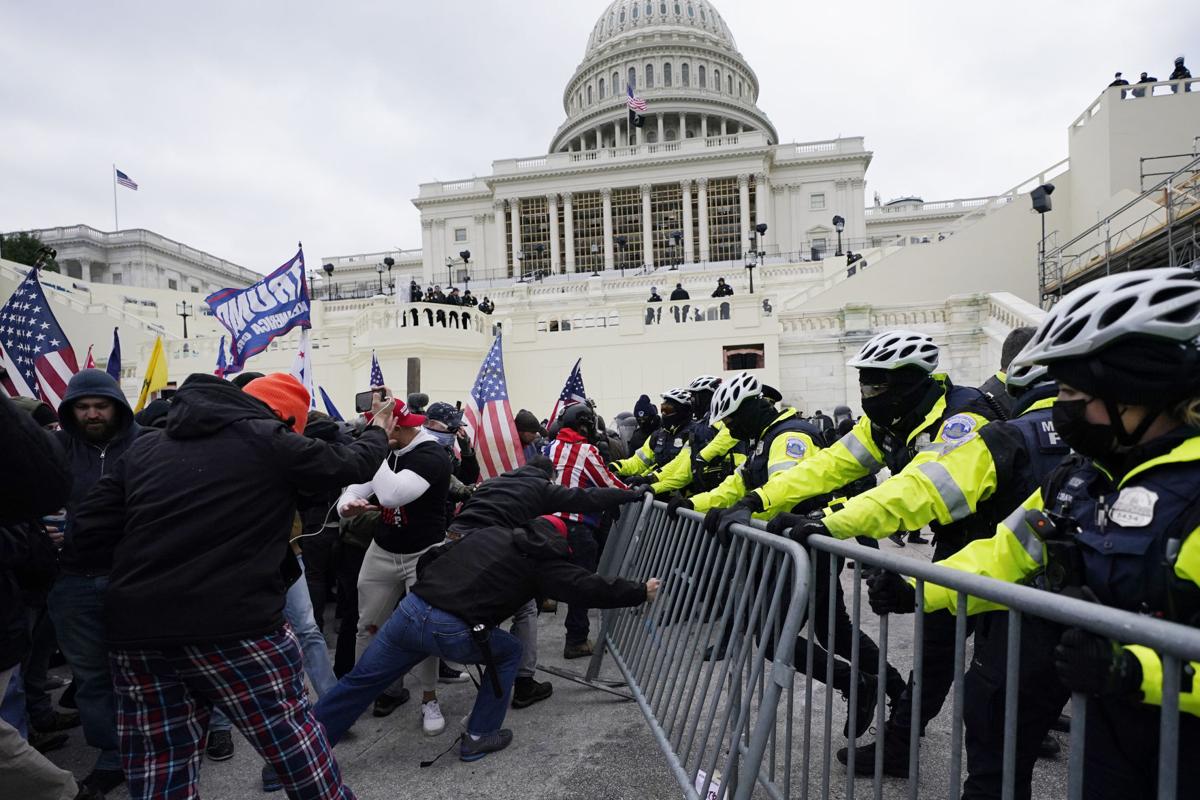 Trump supporters try to break through a police barrier, Wednesday at the Capitol in Washington. 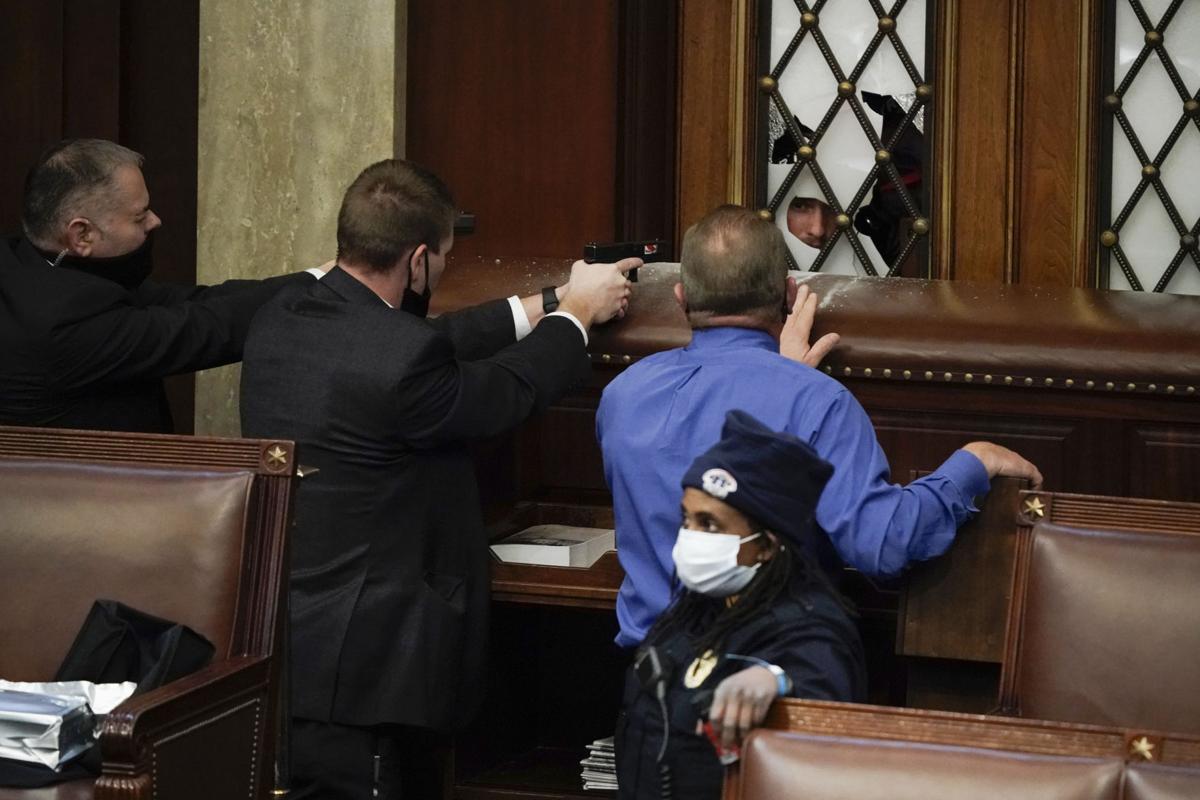 Police with guns drawn watch as protesters try to break into the House Chamber at the U.S. Capitol on Wednesday in Washington. 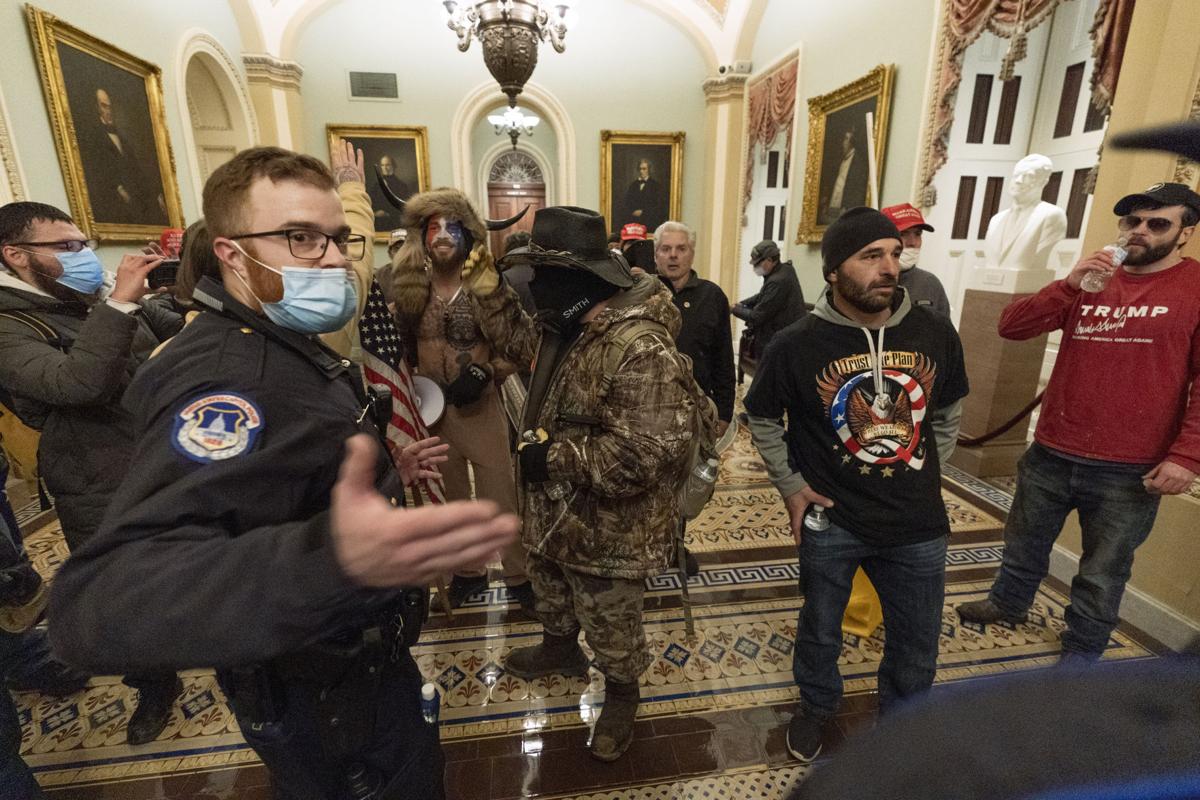 Supporter of President Donald Trump are confronted by Capitol Police officers outside the Senate Chamber at the Capitol, Wednesday, Jan. 6, 2021 in Washington.

WASHINGTON (AP) — The crowd pushed past the police barricades, up the steps to the iron doors and in what seemed like no time at all, hoisted a Trump flag from the U.S. Capitol.

“Protesters are in the building,” came the last words picked up by a microphone carrying a live feed of the Senate before it shut off.

It was an extraordinary, unprecedented scene.

"The behavior of these 'protesters' on the Capitol Complex is absolutely abhorrent. This is un-American. I denounce this behavior to the fullest extent. We are so much better than this," Rep. David Valadao (R-CA 21st District) wrote on Facebook Wednesday afternoon.

Trump, the defeated president, had been encouraging protesters as Congress convened for a joint session to certify Joe Biden’s win.

Under the very risers set up for Biden’s inauguration at the U.S. Capitol, the Trump supporters gathered.

Protests are typical at the Capitol. But this one was not.

At least one person was shot and killed, though it’s not clear who pulled the trigger during the chaotic scene. Some in the crowd were shouting “traitors” as officers tried to keep them back.

Inside the House chamber, lawmakers described a harrowing scene.

As they stayed down, they were told to have gas masks at the ready -- and take off the lapel pins they wear identifying them as elected representatives.

Police had guns drawn, and furniture barricaded the door.

Glass was shattered. Some prayed while protesters banged on the doors. Rep. Dean Phillips yelled loudly at his Republicans, “This is because of you!”

A chaplain prayed as police guarded the doors to the chamber and lawmakers tried to gather information about what was happening.

Announcements blared: Due to an “external security threat,” no one could enter or exit the Capitol complex, the recording said. Lawmakers tweeted that they were sheltering in place.

Reporters and lawmakers hid under tables as the protesters banged on the door, demanding to be let inside. Rumors of guns spread but it wasn’t clear if any shots were fired beside the one. Tear gas was said to have been dispersed in the Rotunda.

After making sure the hallways were clear, police swiftly escorted people down a series of hallways and tunnels to a cafeteria in one of the House office buildings.

As he walked out of the Capitol, Connecticut Rep. Jim Himes said he “always assumed it could never happen here.”

But others were not so sure.

Rep. Mike Kelly of Pennsylvania, among those challenging Biden’s win, blamed “both sides” for the chaos at the Capitol.

“What do you think was taking place in this country?” he told reporters. “There’s been a lot of people during the last four years that have just been getting more and more incensed over what is going on around the country, on both sides. It’s just too bad. This is not how we handle things in America.”

The Senate side was not much different.

Vice President Mike Pence, who was presiding over the session, was evacuated from the Senate as protesters and police shouted outside the doors.

Police evacuated the chamber at 2:30 p.m., ushering senators to the first of what would be several undisclosed locations.

Clerks grabbed boxes of electoral college certificates as they left.

Vice President-elect Kamala Harris, attending the session, was among those ushered to safety.

As soon as they left, protesters roamed the halls shouting, “Where are they?” One got on the Senate dais and yelled, “Trump won that election.”

Before protests broke out, Valadao, who serves Kings County as well as other parts of the Valley, posted on social media that, "The role of Congress as defined by the Constitution is to count the votes certified by the states. It is not the role of Congress to choose who the states certify. Only states have the authority to appoint electors.

"Choosing to ignore the facts for the sake of party power is damaging to the American people’s confidence in the Electoral College and sets an unwise precedent for future elections.
"Simply put, Congress does not have the power to pick the president — the American people do, through the Electoral College."
Valadao recently announced Saturday that he has tested positive for COVID-19.

WASHINGTON — President Donald Trump pressed his hopeless case for overturning the election to a crowd of supporters Wednesday, fueling the gri…

Trump impeachment trial to focus on his attacks on election

WASHINGTON — Three days before supporters of President Donald Trump rioted at the Capitol, the Pentagon asked the U.S Capitol Police if it nee…

Pentagon says US has dropped to 2,500 troops in Afghanistan

WASHINGTON — The U.S. military has met its goal of reducing the number of troops in Afghanistan to about 2,500 by Friday, a drawdown that may …

WASHINGTON — On his way out the door, Secretary of State Mike Pompeo lashed out anew at China on Tuesday by declaring that its policies on Mus…

Supporters of President Donald Trump are confronted by Capitol Police officers outside the Senate Chamber inside the Capitol, Wednesday, Jan. 6, 2021 in Washington

Trump supporters try to break through a police barrier, Wednesday at the Capitol in Washington.

Police with guns drawn watch as protesters try to break into the House Chamber at the U.S. Capitol on Wednesday in Washington.

Supporter of President Donald Trump are confronted by Capitol Police officers outside the Senate Chamber at the Capitol, Wednesday, Jan. 6, 2021 in Washington.