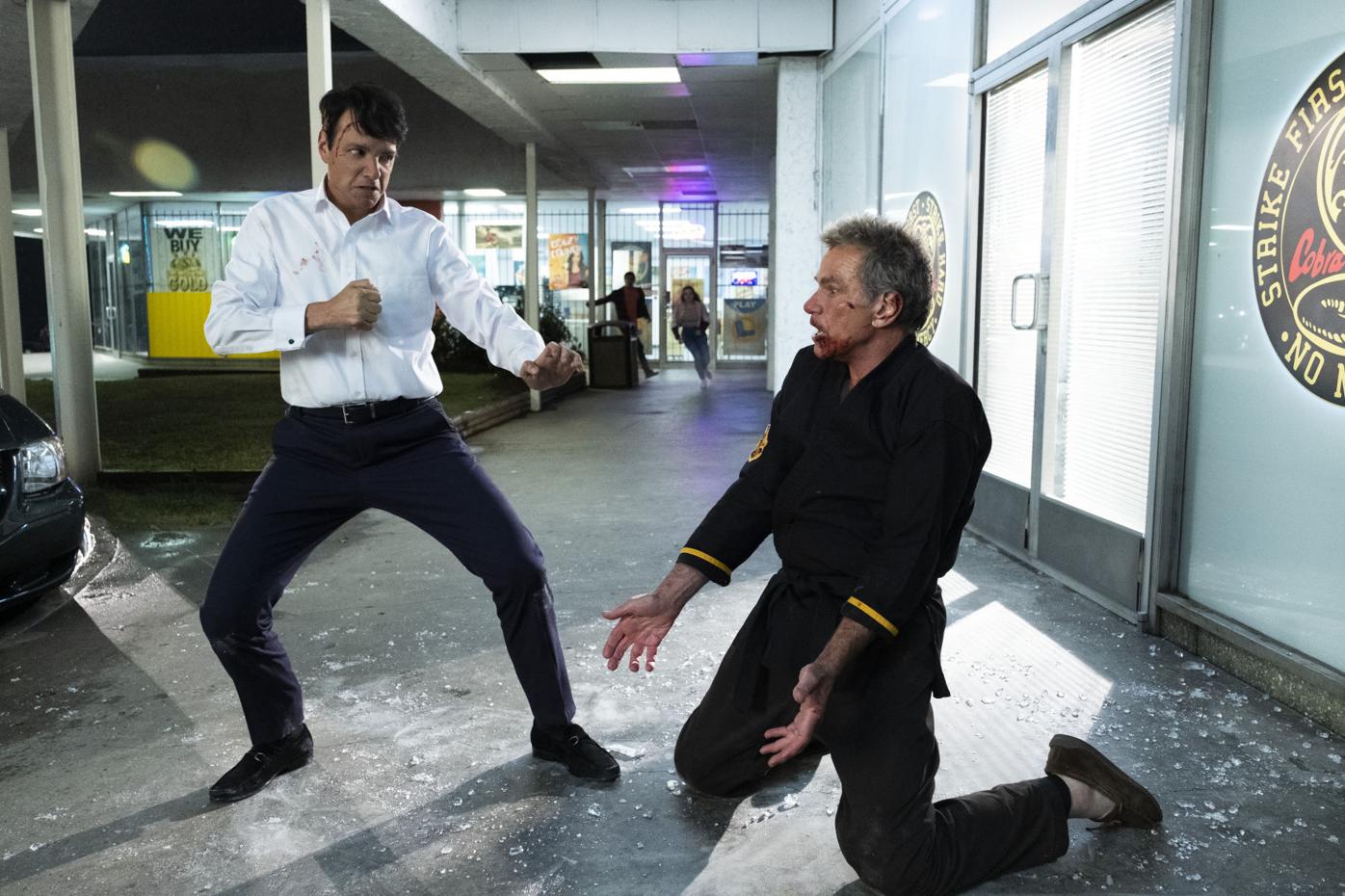 CORRECTS SPELLING OF RALPH MACCHIO - This image released by Netflix shows Ralph Macchio, left, and Martin Kove in a scene from "Cobra Kai." The program was nominated for an Emmy Award for outstanding comedy series. 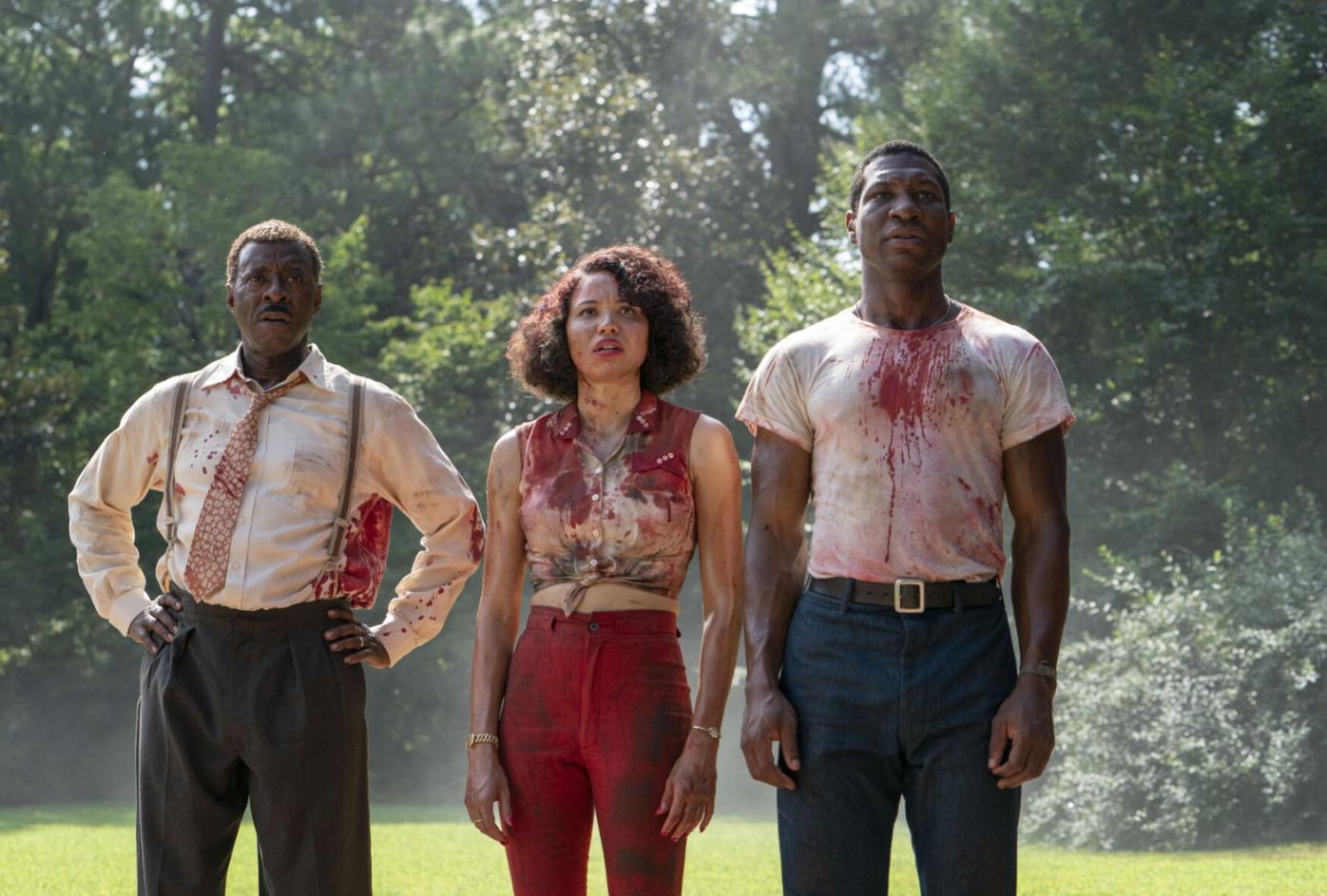 This image released by HBO shows, from left, Courtney B. Vance, Jurnee Smollett and Jonathan Majors in a scene from "Lovecraft Country." The program was nominated for an Emmy Award for outstanding drama series.

CORRECTS SPELLING OF RALPH MACCHIO - This image released by Netflix shows Ralph Macchio, left, and Martin Kove in a scene from "Cobra Kai." The program was nominated for an Emmy Award for outstanding comedy series.

This image released by HBO shows, from left, Courtney B. Vance, Jurnee Smollett and Jonathan Majors in a scene from "Lovecraft Country." The program was nominated for an Emmy Award for outstanding drama series.

“Pose” left the ballroom with a clutch of Emmy nominations. The groundbreaking FX show about ballroom culture in the 1980s and ’90s ended its third and final season with nods for Billy Porter and Mj Rodriguez — the first trans woman up for a major acting Emmy — and a best drama series nomination, its second. The series from creators Steven Canals and Ryan Murphy made history with its historic casting of transgender actors to play trans characters. The series took on transphobia, racism and the AIDS epidemic. GLAAD and a number of LGBTQ+ organizations pressed for recognition from Emmy voters this year in an open letter, saying “if there was any moment to show solidarity and support for the performers and characters who are leading the change, now would be that time.”

“I MAY DESTROY YOU”

Critically adored but ignored by the Golden Globe voters, “I May Destroy You” roared back to earn nine Emmy nominations. Michaela Coel’s exploration of rape and its aftermath earned her a lead actor nod and the show a best limited or anthology series nomination. The series, which is made up of 12 half-hour episodes, explores the question of sexual consent in contemporary life. Coel plays Arabella Essiedu, a care-free Londoner whose life changes after her drink is spiked with a date-rape drug. The co-production between the BBC and HBO won best mini-series and leading actress for Coel at the British Academy of Film and Television Arts awards. After it failed to get a Golden Globe nod, a writer for the Netflix series “Emily In Paris” publicly said that “I May Destroy You” deserved a Golden Globe nomination over her own show.

“Cobra Kai,” which started life on YouTube Red, has become a popular option on Netflix and just nabbed four Emmy nominations, including a shock best comedy nod. The show follows former “Karate Kid” rivals Johnny Lawrence and Daniel LaRusso almost 30 years after the events of the film. Now, they’re all grown up with kids of their own, but their rivalry reignites when Johnny reopens the Cobra Kai dojo and begins teaching the next generation of new karate students. Netflix acquired the third season and viewership exploded.

“Ratched,” led by Sarah Paulson, was largely ignored at the Emmy nominations. The Ryan Murphy series — a prequel exploring the origins of Nurse Ratched from 1975’s “One Flew Over the Cuckoo’s Nest” — got lukewarm or worse reviews. The first series saw the nurse at its heart stirring up trouble in the lobotomy-friendly Lucia State Hospital in Northern California. At the Golden Globes, “Ratched” earned three nominations, including a top nomination for TV drama series, Paulson got a nod as lead TV drama actress and Cynthia Nixon was up for supporting actress honors. But it went home empty-handed that night. At the Emmy nods on Tuesday, Paulson and Nixon were given the brush off and the show only earned nominations for guest star Sophie Okonedo, as well as costumes, makeup and hairstyling.

HBO’s “Lovecraft Country” took pop culture by storm in August and helped advance the social conversation ignited by the death of George Floyd. It earned a whopping 18 Emmy nominations. The series starred Jurnee Smollett and Jonathan Majors and centered on a Black man’s journey across Jim Crow America to find his father and discover the truth about his family. It had a unique blend of horror, fictional period drama, real historical figures, fantasy, sci-fi and social commentary. Jordan Peele of “Get Out” and “Us” fame and J.J. Abrams of “Lost” and “Westworld” served as executive producers. The first season was based on the 2016 book by Matt Ruff. A decision was made not to proceed with a second season.

Shonda Rhimes’ first scripted series for Netflix was “Bridgerton” and was described as if “Downton Abbey” was mixed with “Gossip Girl.” It became a huge hit and nabbed a dozen Emmy nominations Tuesday, including best drama series. Based on Julia Quinn’s romance novel series, it centers on the romantic entanglements of English society’s upper crust and had a multiethnic cast and an anonymous gossip columnist — voiced by none other than Julie Andrews. The series, which takes place in the 1800s, follows the Bridgerton family and their love interests. The eight-episode series made a star of Regé-Jean Page (who earned an actor nod Tuesday) and was anything but G-rated, becoming gently mocked on late night TV for its sex scenes and on “Saturday Night Live” with a sketch starring sketchy intimacy coaches. The series was snubbed at the Golden Globes.

“Girls5eva,” the Peacock series about a ’90s one-hit-wonder pop group who reunite as adult women to mount a comeback, got little love at the Emmy nomination, scoring only one nod for writing. Busy Philipps, Sara Bareilles, Renée Elise Goldsberry and Paula Pell play former members of the girl group Girls5eva, now in their 40s. It’s the brainchild of Emmy Award-winning writer Meredith Scardino, whose credits include “The Colbert Report” and “Unbreakable Kimmy Schmidt,” and Tina Fey is an executive producer. It’s been renewed for another season. “I wanted to write a show about women in my age group and be able to talk about all the things that you go through as being a woman in your forties,” Scardino told critics.

“Emily in Paris,” Darren Star’s cliché-filled view of the French capital, scored an Emmy nomination for best comedy and production design. The show stars Lily Collins as a naïve American social media guru relocating to the city of lights despite being utterly clueless about the language and culture. At the Golden Globes, Collins was nominated as best actor in a comedy and the show got a nod as best comedy series. In Season One, Emily stumbled into a romance with her chef neighbor and made friends, including a wannabe professional singer. The show has also garnered a wave of criticism for its portrayal of French people and negative stereotypes of Paris. Even so, a second season has been green-lit.

Jean Smart is having a moment and the Emmy nominations proved it. She nabbed two nods Tuesday — a supporting one for the crime drama “Mare of Easttown” and as the star of HBO Max’s new comedy “Hacks,” playing a Joan Rivers–esque Vegas comic. Smart has lately been in buzzy shows like “Fargo,” “Legion,” “Dirty John” and “Watchmen.” Able to do drama and comedy, Smart, 69, has shone in small roles, in supporting roles and as a member of ensemble casts, including “Designing Women,” “24” and “Frasier,” where she won back-to-back Emmys in 2000 and 2001 for her recurring guest-star role as Frasier’s old girlfriend. In “Hacks,” Smart plays successful comedian Deborah Vance, who’s been cashing in on the same routine for years and finally hires a young comedy writer to spice up her sets. On “Mare of Easttown,” she played the grumpy mother of the detective character played by Kate Winslet.